With half of Australia locked down, Bondi has become public enemy No 1 | Brigid Delaney

It was the night before Melbourne went into its most recent lockdown and I texted a friend in Brunswick my commiserations. Going into his fifth lockdown, he was not happy. In response he fired off a string of messages, mostly in CAPS that this was the fault of Bondi people.

HONESTLY BRIDGE IT IS YOUR BONDI BRIGADE WHO DIDN’T TAKE IT SERIOUSLY A MONTH AGO … BEACHES CAFES EXERCISE … BONDI JUNCTION AND SURROUNDS everyone just partied and stuff. So fucked.”

Bondi’s been many things to many people over the years – icon, a trashbag, soul defibrillator, gorgeous, gross – but currently it’s in danger of being the most hated place in Australia.

The story of why the rest of Australia hates Bondi has to do with Covid, money and optics.

It’s got that thing that no place wants: a namesake Covid cluster, the tail of which has ultimately sent 14 million Australians into lockdown. It’s not just the cluster – people are regularly filmed on the beach and promenade taking exercise, with the footage then being distributed widely as evidence of the residents’ arrogance.

In the last week, after a clip posted on Twitter of exercisers on the promenade going viral, Bondi has become synonymous with selfishness and privilege.

The Daily Telegraph quoted police minister David Elliott as saying it seemed Bondi beachgoers “are living on another planet. It’s not only selfish but it is arrogance of the highest order.” In the Australian newspaper, the headline was “Bondi in lockdown … but you wouldn’t know it.”

Are you kidding me? The people of SW Sydney aren’t allowed to travel for work, are being tested in massive numbers & have a strong Police presence & have to watch scenes like this? We are meant to all be in it together. And mean it. Fix this @GladysB. It’s an insult to Fairfield https://t.co/mp3Ufq2Yxk

A narrative is emerging. It’s become a thing to bash Bondi.

There is in this narrative, a story of Bondi exceptionalism – that the rules do not apply to the people of postcode 2026, and that the trapping of the good life will shield you from what has come for everyone else. It is the local version of the Australian exceptionalism which has led us to the awful mess we find ourselves in this awful month: half the country locked down, not enough vaccines, the folly of thinking you’ll get through the big, bad thing unscathed.

The start of this new version of Bondi, the one Australia hates right now, dates back to the mid-1990s, when pipes dumping sewage into the ocean were relocated away from Bondi beach and the rich started to move in.

That’s when James Packer bought an old garage on the corner of Campbell Parade and turned it into a four-storey batch pad (later sold for $29m) – and the suburb went from an outpost for effluent to an outpost for the affluent.

Apart from its sister-from-another-mister town, Byron Bay, Bondi has some of the most expensive housing in Australia. And like Byron Bay, the work-from-home revolution has made beachside living more attractive, pumping up housing prices and driving down decent affordable rental stock.

Attending half a dozen open-for-inspections at Bondi Beach a few weeks ago, I found that around $600 a week for a one-bedroom apartment got you something damp, mouldy and a little bit dark. After 20 years on and off of living in the area, it was finally time to concede I’d been priced out.

But like Byron Bay, people wouldn’t flock there and prices wouldn’t be so high if there wasn’t something special about the place.

Starting the day with a walk, swim and coffee or immersing yourself in the ocean at the north end at golden hour is a spiritual experience that cancels out the typical pre-renovated Bondi apartments’ damp carpet and mouldy ceiling that may await you at home.

At its heart I’ve always found Bondi to be not dissimilar to a village or a country town. On the boardwalk you run into the same people. There are baristas there who took my coffee order in 2005 and when I return years later remember me and the coffee order.

Up on Bondi Road there’s still mum-and-dad stores and places to get a late-night feed.

The Bondi that Australia hates right now is just the top layer. It’s always been more interesting than that. Yes, people have been pushed out because of high prices, but there’s enough apartments, sharehouses and old timers that the suburb can still claim a degree of diversity. For the moment, it’s still a place where you can live if you are a writer, or work in hospitality or in a low-wage job.

And even when Packer moved in, the suburb maintained its raffish vibe. After all, who can forget the pictures of Packer and Nine boss David Gyngell, which somehow sums up the vibe of the place. Where else would you see two of Australia’s most powerful men essentially trying to dack each other in a fistfight on the street?

Speaking to residents this week, they are upset about the demonisation of their suburb.

“The video on Twitter that went viral on Sunday was really unfair. I was down at the beach that day – people were socially distancing, complying with the rules. Bondi just gets used by tabloids and politicians to whip up class warfare,” said one friend.

Even naming a cluster after Bondi struck one resident as being unfair – considering the “limo driver hung out mostly in Vaucluse and then it spread from Bondi Junction”. 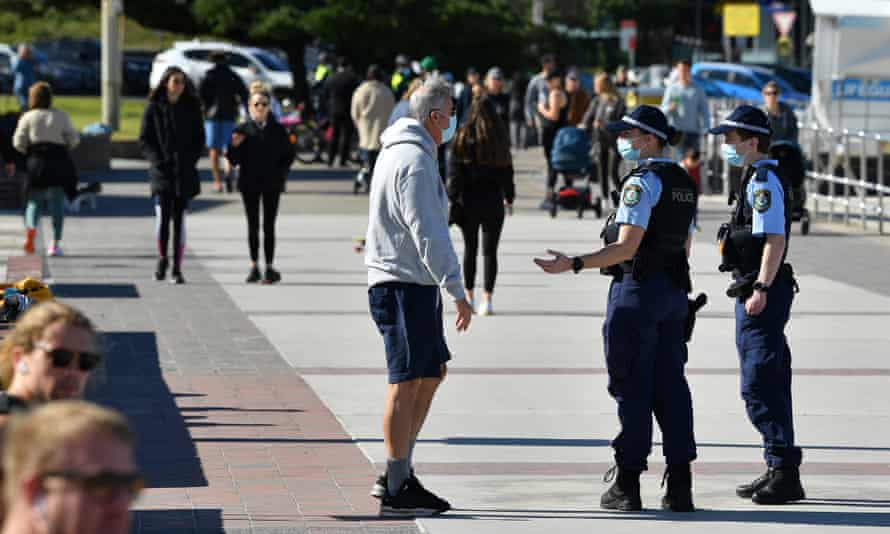 NSW police patrol the promenade at Bondi beach on 20 July during the Covid lockdown of greater Sydney. Photograph: Joel Carrett/AAP

The times I have been down to the beach in the past week, there has been a big police presence, and they will move you on if you sit down. It’s arguably not the same policing vibe as in Sydney’s south-west, but nor is the area and its residents somehow magically untouched by restrictions.

Down at the beach, quick swims in the winter sea and the coldness of the sand discourage lingering anyway. I still love it here, despite being priced out. And maybe that’s why: there’s something egalitarian (more so after the 10km rule lifts) about the beach and the promenade. It belongs to everyone.