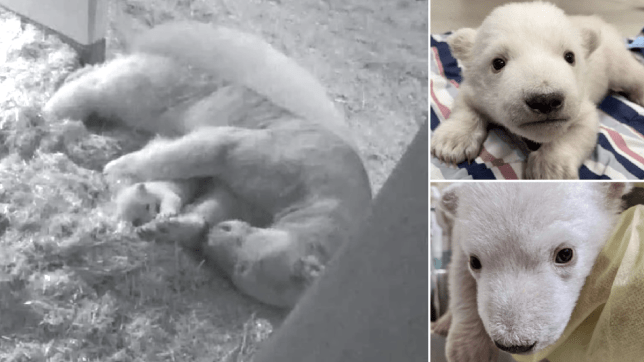 Suka the polar bear was filmed caring for one of the two cubs she gave birth to at Detroit Zoo last November (Picutres: Detroit Zoo)

Here’s something heartwarming to help you through the depths of winter – a mother polar bear caring for one of her newborn twin cubs. The mom, called Suka, welcomed her babies at Detroit Zoo in Michigan last November, with the zoo sharing news of the new arrivals last week.

Both cubs arrived weighing around 560grams (1.2lbs) – and are dwarfed by their mother, who weighs 377kg (830lbs). An infrared camera placed in Suka’s enclosure showed her cuddled up to one of her babies, and giving the tiny polar bear an affectionate lick.

Two days after Suka welcomed her cubs, who have not yet been named, zoo staff noticed one of them becoming lethargic over the video stream.

They were able to retrieve the animal, and has since been bottle fed by zoo staff to help her get her strength up. Zoo staff hope to be able to reunite her with her mother and brother soon. They are also keeping an eye on Suka as she continues to raise her other cub.

A Detroit Zoo spokesman said: ‘She has been a very attentive mom; continuously nursing, grooming and cuddling her cub, with only short water and bathroom breaks.’

The zoo said that both cub are beginning to get their teeth, and that their eyes are open. They said raising one cub by hand, and leaving her sibling to be raised by Nuka will give valuable information on how cubs raised by humans behave differently to those raised by their mother.

Suka previously gave birth to cubs in 2018 and 2019, but they did not survive. The cubs’ father is a 16 year-old polar bear called Nuka, who also lives in the zoo’s enclosure.

Suka and the cub she is caring for remain in a private maternity area, but Suka and another 20 year-old polar bear called Anana can be seen by visitors to the zoo.

Polar bears’ survival has been threatened by global warming melting their icy natural habitats, with zoos across the US developing a ‘survival plan’ to try and bolster their numbers.