Alien life ‘could be widespread’ across the universe

Organic molecules could turn into organisms on other planets, new research has suggested (Getty)

Aliens could be widespread across the universe, according to new research.

The chemical conditions that resulted in life on Earth are common, say astronomers.

Rich reservoirs of large organic molecules that can turn into basic organisms have been detected all over the Milky Way.

The abundance is up to 100 times greater than previously imagined – providing a big tonic for extra-terrestrial hunters.

Civilisations may have risen and fallen over billions of years – before the Earth formed.

Co-principal investigator Dr Catherine Walsh, of Leeds University, said: ‘The same ingredients needed for seeding life on our planet are also found around other stars.

‘It’s possible the molecules needed to kick-start life are readily available in all planet-forming environments.’

The Milky Way has around 400 billion stars – each with at least one orbiting planet. Millions are in the ‘Goldilocks zone’ where water is liquid.

The chemical ‘soup’ was identified in ‘protoplanetary disks’ of gas and dust circling young stars.

Dr Ilee said: ‘Laboratory and theoretical studies suggest they are the ‘raw ingredients’ essential in biological chemistry on Earth.

‘They create sugars, amino acids and even the components of ribonucleic acid (RNA) – under the right circumstances.’

Biologists believe the first life on Earth was based on RNA – a nucleic acid similar to DNA.

Dr Ilee said: ‘However, many of the environments where we find these complex organic molecules are pretty far removed from where and when we think planets form.

‘We wanted to understand more about where exactly, and how much of, these molecules were present in the birthplaces of planets – protoplanetary disks.’

The findings are based on an analysis of unique ‘spectral fingerprints’ in light emitted from material surrounding the newly formed stars.

Data was collected by the ALMA radio telescope in the Atacama desert in Chile.

It can pick up the faintest signals from the coldest regions of outer space.

They are ‘stepping-stones’ between the simple carbon-based chemicals abundant in space and more complex cousins. 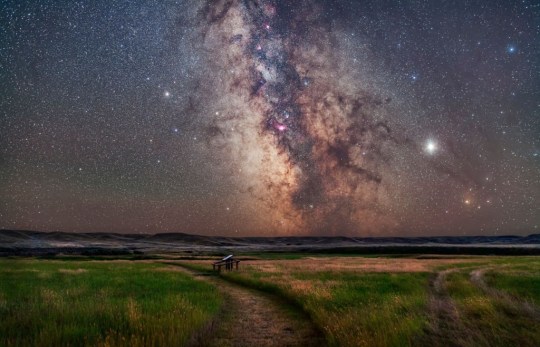 The core of the Milky Way in Sagittarius low in the south over the Frenchman River valley at Grasslands National Park, Saskatchewan. (Getty)

Another 15 – including hydrogen cyanide and nitriles connected to the origins of life – were also present in differing amounts.

New worlds are emerging in the protoplanetary disks – which are 300 to 500 light years away.

A similar disk once surrounded the young Sun – ‘feeding’ the planets that now make up our Solar System with material.

The Milky Way has around 400 billion stars – and each has at least one planet. Millions are in the ‘Goldilocks zone’ where water will be liquid.

Dr Walsh explained: ‘ALMA has allowed us to measure the distribution and composition of material actively building planets around nearby young stars for the first time.

‘The telescope is powerful enough to do this even for large complex molecules that are precursors for life.’

Earth is thought to have been ‘seeded’ via impacts between space rocks in the protoplanetary disk around the Sun.

But scientists were uncertain if other protoplanetary disks contain biologically significant molecules.

Dr Ilee said: ‘ALMA has allowed us to look for these molecules in the innermost regions of these disks, on size scales similar to our Solar System, for the first time.

‘Our analysis shows the molecules are primarily located in these inner regions with abundances between 10 and 100 times higher than models had predicted.’

What’s more, regions in which the molecules were located are also where asteroids and comets form.

Dr Ilee says a process similar to the initiation of life on Earth could also happen there.

Bombardment by asteroids and comets transfers the large organic molecules to the newly formed planets.

The researchers next plan to want to search for even more complex molecules in the protoplanetary disks.

Dr Ilee said: ‘If we are finding molecules like these in such large abundances, our current understanding of interstellar chemistry suggests even more complex molecules should also be observable.

‘We’re hoping to use ALMA to search for the next stepping stones of chemical complexity in these disks.

‘If we detect them, then we’ll be even closer to understanding how the raw ingredients of life can be assembled around other stars.’ 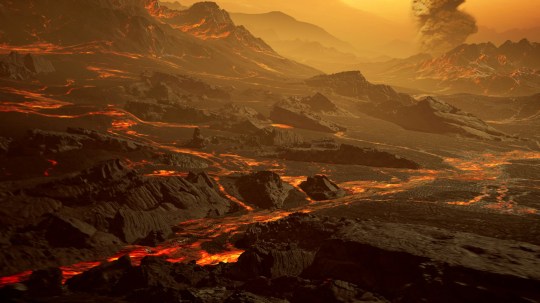 The MAPS (Molecules with ALMA at Planet-forming Scales) programme comprises astrophysicists from 16 universities across the world.

Project chief Professor Karin Oberg, of Harvard University, said: ‘These planet-forming disks are teeming with organic molecules, some which are implicated in the origins of life here on Earth.

‘This is really exciting; the chemicals in each disk will ultimately affect the type of planets that form – and determine whether or not the planets can host life.’

She said: ‘Our maps reveal it matters a great deal where in a disk a planet forms.

‘Many of the chemicals in the disks are organic, and the distribution of these organics varies dramatically within a particular disk.

‘Two planets can form around the same star and have very different organic inventories, and therefore predispositions to life.’

Many ‘exoplanets’ – worlds beyond the Solar System – could soon be within the grasp of our technology.

More than 4,000 have been discovered so far – and NASA satellite Tess will is expected to multiply the number dramatically in the next decade.

There are an estimated billion trillion stars in the universe.