Apple pushes back staff returning to the office until February

The biggest tech company in the world has pushed back plans to get its staff back into the office.

According to an internal email, Apple will continue to let staff work remotely until February of next year.

Chief executive Tim Cook sent the email, obtained by NBC News, to Apple staff encouraging them to get vaccinated.

‘As of today, we are targeting February 1, 2022 to begin our hybrid work pilot in many global locations where teams have not yet returned to our corporate offices,’ it reads.

The continued spread of the Delta variant of Covid-19 is likely behind the decision to delay the return of staff.

Apple says that when employees do make their way back, it will be through a hybrid approach. The first month back will require two days a week, then from March, that will increase to spending Mondays, Tuesdays and Thursdays in the office.

Alongside this, staff will get up to four weeks of remote working time to be taken per year.

‘This provides more opportunity to travel, be closer to your loved ones, or simply shake up your routines,’ Cook wrote. 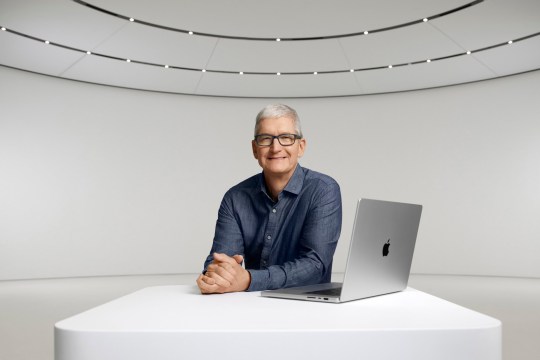 Apple employees have previously opposed being forced back to their desks in the wake of the pandemic.

In June, when the company first tried to get staff back, an open letter was sent to Mr Cook from a number of employees wanting to embrace remote work.

In the letter, the employees pointed out that since moving to a remote system due to Covid, Apple has achieved a record-breaking year of sales, pushed out new versions of its biggest operating systems and released a slew of new products.

‘Over the last year we often felt not just unheard, but at times actively ignored,’ the employees wrote.

‘Messages like, “we know many of you are eager to reconnect in person with your colleagues back in the office,” with no messaging acknowledging that there are directly contradictory feelings amongst us feels dismissive and invalidating…It feels like there is a disconnect between how the executive team thinks about remote / location-flexible work and the lived experiences of many of Apple’s employees.’

Around 80 employees were involved in writing and editing the letter addressed to Cook.

Work on it reportedly started in a Slack channel for ‘remote work advocates’ consisting of roughly 2,800 members.

To be fair, you can understand Apple wanting staff to use the ‘spaceship’ HQ it spent years building in Cupertino. The 2.8 million-square-foot property in Santa Clara is valued at $4.17bn – roughly £2.9 billion.

At the height of the pandemic, according to the Office for National Statistics (ONS), almost half of us here in the UK were doing some work at home.