A BIZARRE floating object was seen flying through the skies leaving onlookers fearing it has extra-terrestrial origins.

Lynsey Currie spotted the strange shape soaring over her flat in Glasgow – and her boyfriend quickly filmed the odd spectacle.

Lynsey Currie spotted the strange shape soaring over her flat in GlasgowCredit: .

She told Glasgow Live that it was flying “from the northwest of Glasgow towards the southwest” in her footage.

In it, he says: “It’s literally a UFO because it’s unidentified. It’s coming by us.”

It comes after Yorkshire was revealed to be the UK’S UFO capital, with more reports than anywhere else.

Some 200-plus have been “spotted” there in two decades – including a glut this year.

Scores more were reported in the summer, including three in four days.

UFO-watchers claim they may be drawn to the region’s open spaces and mountainous terrain.

Sightings in June included a “black triangle” hurtling above Leeds, with “no noise or lights visible”.

Meanwhile, a real life X-Files office has been opened by a former cop whose UFO books were praised by Prince Philip.

John Hanson has more than 25,000 reports dating back over two decades and has probed some of the biggest cases in the UK including the infamous Rendlesham Forest incident of 1980 involving US and British airmen.

He has opened the British UFO Information Office to give the public access to his vast collection of documents and files.

John, who spent 30 years in the force, said: “I began collecting information and records from a number of UFO groups over the years.

“I thought it best to date all of the material – for example, if you said what happened in January 1995, I would set out four huge files showing on a day to day basis what was reported both by the press and the UFO groups concerned. 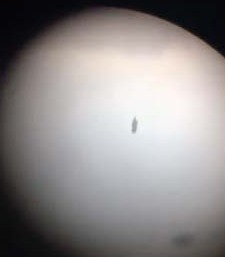 Lynsey said it was flying “from the northwest of Glasgow towards the southwest”Credit: .