A BOAT full of naked passengers gatecrashed a couple’s wedding anniversary after a nudists tour cruised by.

The couple having a romantic dinner got the shock of their lives when a boat full of naked people waved as they ate at a restaurant by a river.

The ship was operated by the naturist Torbay Sun Club as it conducted its annual ‘Nude Cruise’Credit: BPM 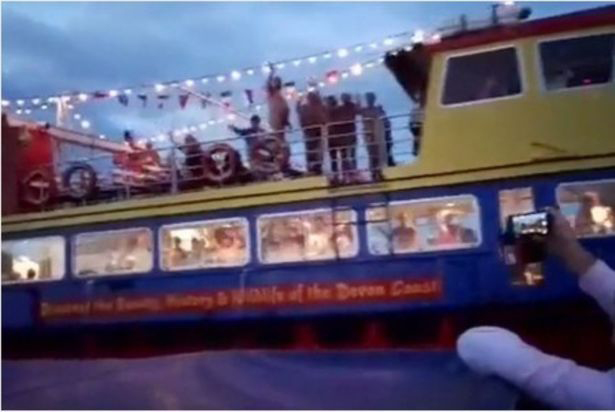 John Wood, of Seawood Yachts, was at the River Exe Cafe enjoying a meal with his wife when a cruise ship of ‘naturists’ passed by, exposing them to some surprising sights.

The ship was operated by the naturist Torbay Sun Club as it conducted its annual ‘Nude Cruise’.

Members enjoy the cruise while completely naked, and are encouraged to interact with other fellow naturists onboard.

While most of the diners at the restaurant were amused to see the passengers in all their glory, some were concerned for their health due to the high winds that were blowing at the time.

John told Devon Live: “My wife and I were having a lovely Anniversary dinner at the River Exe cafe when we caught sight of a boat full of naked people travelling slowly.

“Reaction in the restaurant was mostly of amusement, and concern for their health as the wind was getting up. Luckily that was the only thing that was!’

While many of us are familiar with the term ‘booze cruise’, the Exmouth ‘nude cruise’ has become something of an annual event on the calendar for the naturists of Torbay and beyond.

Each year, they embark on the Exmouth ‘nude cruise’ on a pleasure boat hired from local firm Stuart Line and each year the sight of naked people enjoying the views and partying from the deck below has aroused the attention of other boat users on the estuary.

Contrary to public opinion, being naked is not illegal, except for where it’s intended to cause alarm or distress.

The Torbay Sun Club, which describes itself as one of the UK’s largest naturist swim and sauna clubs catering for people of all ages and walks of life describes how it perceives naturism on its website.