Boris and his then-fiancée Carrie are said to be amongst 40 people who attended the Downing Street party (Pictures: Getty/Shutterstock)

Boris Johnson increased penalties for those flouting Covid-19 rules just a week before the ‘bring your own booze party’ at Number 10.

A leaked email has seemingly revealed that more than 100 staff were invited to Downing Street’s gathering on May 20, 2020.

Around 40 people are said to have attended to eat picnic food and have drinks – including Boris and his then-fiancée Carrie.

The invite, marked ‘official sensitive No10 only’, was apparently sent by Martin Reynolds, his private secretary, and encouraged officials to ‘make the most of the lovely weather’.

At the time of the garden party, hundreds of people were being fined for breaking lockdown.

The government had even warned it was considering tougher enforcement measures.

There were 807 fixed penalty notices issued for breaches of Covid-19 rules in England and Wales in the week between May 15 and May 21, 2020, the latest data from the National Police Chiefs’ Council reveals. 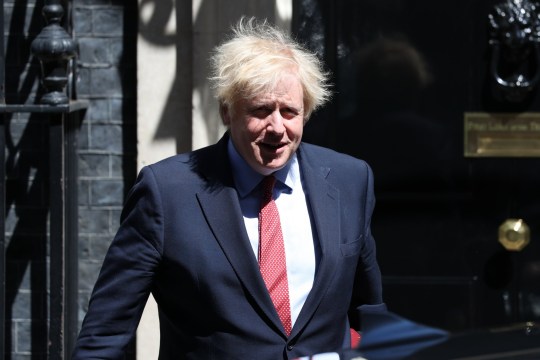 The Tory leader has previously denied any wrongdoing, saying he followed Covid-19 restrictions at all times (Picture: PA)

Mr Johnson raised lockdown fines to £100 on May 13, which could be issued to anyone believed to be breaching restrictions on movement.

Rule-breakers would have had their first fine lowered to £50 if they paid within 14 days – but the penalty doubled for each repeat offence, up to a maximum of £3,200.

At the time, England was in its first lockdown, with non-essential shops, pubs and restaurants shut.

Millions across the UK were also banned from meeting more than one other person outdoors.

In the wake of the revelations, furious Brits have spoken of having to see relatives buried via Zoom funerals and going to pregnancy doctor appointments without their partners.

Boris Johnson, your deflections and distractions are absurd.

Not only did you know about the parties in Downing Street, you attended them.

Others have told of their struggles helping lonely elderly relatives by ‘shouting at them through the window’ or leaving food on their doorstep because they could not meet face-to-face.

Keir Starmer, leader of the Labour Party, has called on the prime minister to ‘finally come clean’.

He said: ‘Boris Johnson, your deflections and distractions are absurd. Not only did you know about the parties in Downing Street, you attended them.

Labour’s Ed Miliband also told Sky News he is ‘lost for words’ at the ‘arrogance’ of the prime minister.

Scotland Yard confirmed it is in contact with the Cabinet Office about the May 20 allegations at Number 10.

A spokesperson said: ‘The Metropolitan Police Service is aware of widespread reporting relating to alleged breaches of the Health Protection Regulations at Downing Street on May 20 2020 and is in contact with the Cabinet Office.’

The Tory leader has previously denied any wrongdoing, saying he followed Covid-19 restrictions at all times.