Boris Johnson does not want to ‘scrap’ post-Brexit rules for Northern Ireland, but has insisted it needs to be ‘fixed’.

Sinn Fein, which became the Assembly’s biggest party for the first time this month, wants the Northern Ireland Protocol to remain in place.

The current arrangement requires checks on goods from Britain to allow an open border with the Republic of Ireland – an EU member.

But the unionist DUP says it is hurting business and undermining Northern Ireland’s position in the UK.

It is refusing to enter a power-sharing agreement in Stormont until the issue is resolved.

After the EU warned ripping up the deal could spark a trade war, the PM told reporters: ‘The five parties I talked to today also think it needs reform. 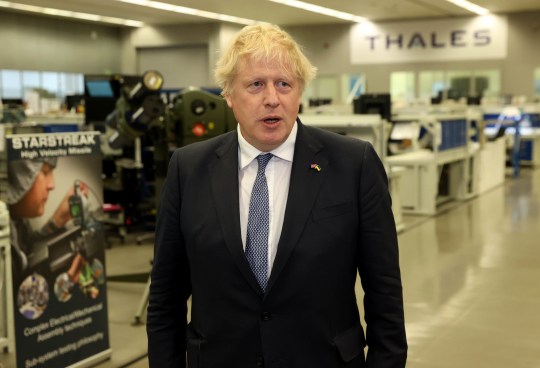 ‘What we’re doing is sticking up for the Good Friday Agreement and trying to protect and preserve the government of Northern Ireland.’

She said the Prime Minister had given ‘no straight answers’ during their ‘tough’ meeting.

DUP leader Sir Jeffrey Donaldson said the idea the PM is ‘taking sides is for the fairies’.

It was Mr Johnson’s ‘job to protect Northern Ireland and ensure we have the right to trade freely within our own country’, he added.

When asked if he urged the DUP to join a power-sharing executive in Stormont, the PM said: ‘You bet.

‘Everybody should be rolling up their sleeves and getting stuck in to the government of Northern Ireland. That is what the people want us, as politicians, to focus on.’

Earlier, Ireland’s foreign minister Simon Coveney warned tearing up the Brexit treaty would lead to ‘stand-offs and legal challenges’. ‘This is a time for dialogue and compromise,’ he said.

In response, a Whitehall insider said No.10’s priority was to uphold stability in Belfast, adding: ‘We’re not after a fight with the EU.’

Following its historic election win, Sinn Fein called for a debate on the creation of a united Ireland.

The party’s vice president Michelle O’Neill said its election victory ‘ushers in a new era’ for the country.

She said there should now be an ‘honest debate’ around the party’s goal of unifying the territory with the Republic of Ireland.