Boris Johnson: First 50 migrants told they will be sent to Rwanda

Boris Johnson has revealed the first 50 migrants have been notified they will be sent to Rwanda as part of the government’s controversial resettlement scheme.

The Prime Minister told the Daily Mail he expected ‘a lot of legal opposition’ from what he called ‘Leftie lawyers’, but insisted the government ‘will dig in for the fight’.

Under the widely criticised policy, asylum seekers deemed to have arrived in the UK ‘illegally’ now face being handed a one-way ticket to east Africa, where their claims will be processed.

If successful, they will be granted asylum or given refugee status in the country.

Those with failed bids will be offered the chance to apply for visas under other immigration routes if they wish to remain in Rwanda but could still face deportation.

The Archbishop of Canterbury, senior Tory backbenchers including former PM Theresa May, opposition MPs and more than 160 charities are among the plan’s critics.

Mr Johnson said the the first 50 ‘illegal entrants into this country’ have already been served notice that they will be sent to Rwanda within a fortnight. 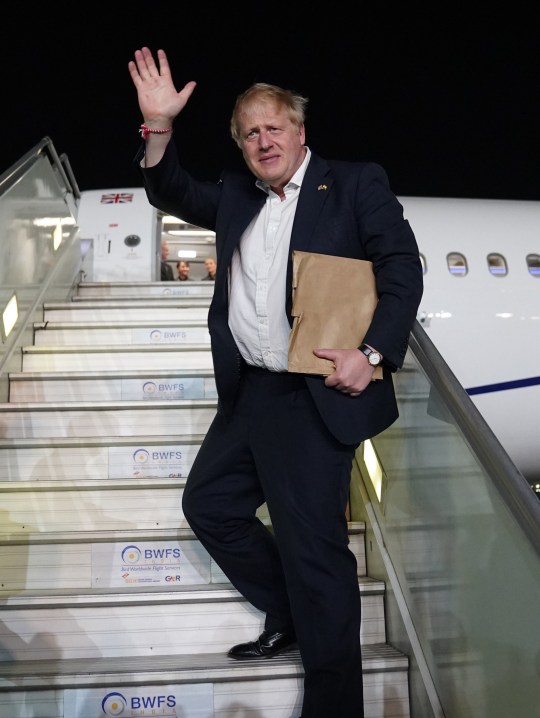 Boris Johnson insisted the government ‘will dig in’ for the legal fight (Picture: PA)

He added: ‘There’s going to be a lot of legal opposition from the types of firms that for a long time have been taking taxpayers’ money to mount these sorts of cases, and to thwart the will of the people, the will of Parliament. We’re ready for that.

‘We will dig in for the fight and you know, we will make it work. We’ve got a huge flowchart of things we have to do to deal with it, with the leftie lawyers.’

Asked if he might respond with a review of the European Convention on Human Rights, Mr Johnson he said: ‘We’ll look at everything. Nothing is off the table.’

Guidance published by the Home Office earlier this month stated that Rwanda is ‘a safe country to relocate people to’.

However, an assessment carried out before the UK-Rwanda agreement found ‘some concerns with its human rights record around political opposition to the current regime, dissent and free speech’.

The Home Office said it will carry out a case-by-case risk assessment when determining someone’s eligibility for relocation and take any vulnerabilities, including disabilities, sexual orientation and gender reassignment status, into account.

The department noted that transgender people ‘may face greater risk of ill-treatment such as arbitrary arrests and detention as well as degrading treatment’, adding ‘no one will be relocated if it is unsafe or inappropriate’.

There were also ‘concerns over the treatment of some LGBTQI+ people’ in Rwanda, but this did not ‘amount to persecution or serious harm’, the Home Office said.

It also pointed to unverified reports that LGBTQ+ asylum seekers had faced challenges in registering their claims, but said Rwanda had committed to treating all refugees equally and that ‘ongoing monitoring arrangements’ are in place to manage the risk.

‘We will continue to consider the impact on this group and take into account further evidence over the course of the partnership,’ the Home Office said.

Unaccompanied under-18s arriving in the UK will not be considered for relocation to Rwanda. 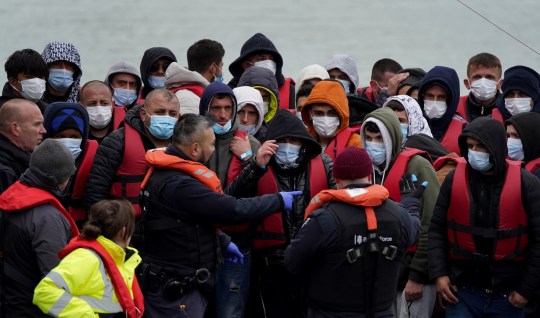 A group of people thought to be migrants are brought in to Dover (Picture: PA)

Anyone under consideration will receive a notice of intent, with the Home Office prioritising those arriving in the UK after May 9.

The UK is paying the processing costs for each person sent to Rwanda, including caseworkers, access to legal advice, translators, accommodation, food, healthcare and up to five years of training to help integration.

Mr Johnson has said tens of thousands of people could be flown to Rwanda under the agreement.

But The Times reported that modelling by Home Office officials indicated that only 300 a year could be sent there.

The department later said it did not recognise the figure and there was no cap on the number of people who may be sent to Rwanda. 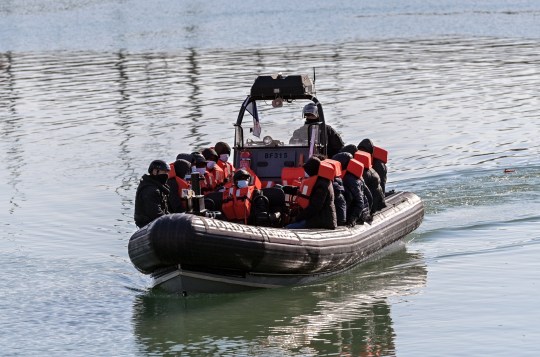 A boat at Dover Docks carrying migrants in the English Channel (Picture: EPA)

Bella Sankey, director of Detention Action – which is one of the organisations threatening legal action against the plan, said: ‘There’s nothing “world-first” about this agreement – it’s a neo-colonial embarrassment that seeks to trade black and brown refugees for money with a country whose human rights record is abysmal.

‘Terrible harm is already being done – people are terrified of receiving these letters, including asylum seeking children who have arrived in the UK on their own. We’ll see the Government in court.’

Last week, activists accused Home Secretary Priti Patel of ‘racist’ and ‘inhumane’ policies and called on her to scrap the Rwanda deal during a speech she was giving at a Conservative Party dinner.

At least 7,739 people have arrived in the UK after crossing the Channel this year so far, according to a PA news agency analysis of government figures.