Tensions in the House of Commons reached boiling point today as Boris Johnson faced repeated calls to resign over the numerous Downing Street parties held at the height of the Covid-19 crisis.

On top of this, the Tory leader is also being accused of ‘outright lying’ to voters over the state of the economy and the job market.

In a jibe to the opposition leader Keir Starmer, the prime minister stressed that ‘we have got all the big calls right’, referring to the government’s handling of the pandemic.

Sending fact-checkers into a frenzy, he continued: ‘What I am focused on is delivering the fastest recovery of any European economy from Covid, the fastest booster roll-out, 400,000 more people on the payrolls now than they were before the pandemic began’.

Mr Johnson also stated that the UK has the fastest growing economy in the G7 – a forum of advanced world nations including Canada, France, Germany, Italy, Japan, the UK and the USA.

It is a claim that he has made frequently during PMQs in recent weeks, but it has already been proven untrue. 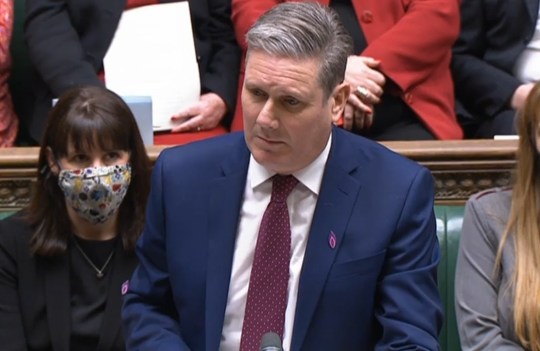 However, when comparing the second and third quarters of 2021, the country ranked fifth – after France, Italy, Germany and Canada.

What’s more, the country has recorded the second worst growth among the G7, shrinking by 1.5% during the course of the pandemic.

During the PMQs, Mr Johnson was also asked if he accepts the ministerial code applies to him, including that he would need to resign if he knowingly misled parliament.

He replied ‘of course’ and added: ‘Let me tell the House that I think he is inviting a question about an investigation which, as you know, Mr Speaker, I cannot comment on, and which he, as a lawyer, will know that I can’t comment on.’

â UK not the fastest growing country in G7

â 400K jobs have not been added compared to start of pandemic.

â Govt have not got all the âbig calls rightâ

This is all very provably false. pic.twitter.com/nPrtzxAifm

Shortly after his statement, social media flooded with accusations that he ‘lied’ to the public about 400,000 more people on payrolls.

Again, this is a commonly repeated claim, also made by several Cabinet Ministers and MPs, including secretary of state Nadine Dorries.

When Metro.co.uk first fact-checked this, the Department for Work and Pensions said that the prime minister was referring to the latest ONS data, which shows that the number of job vacancies in October to December last year rose to a new record of 1,247,000.

This represents an increase of 462,000 from the pre-pandemic levels – but it does not necessarily mean that these spots were filled.

According to Full Fact, estimates for last month show there were around 29.5 million payrolled employees in the UK – around 409,000 more than in February 2020.

But this figure does not include everyone in employment as the Tory leader previously claimed and it excludes those who are self-employed.

Metro.co.uk has contacted the Cabinet Office for a comment.

A Ukrainian family from Kyiv is among the millions who have been displaced by the Russian invasion of their homeland...

UK monkeypox cases ‘could rise significantly in next few weeks’