A TODDLER battled a life-threatening bacterial infection after his hand got sucked into a Shark vacuum cleaner.

Mischievous Henri Chaudry, one, toppled the device and switched it on when his mum Louise Chester, 45, turned her back. 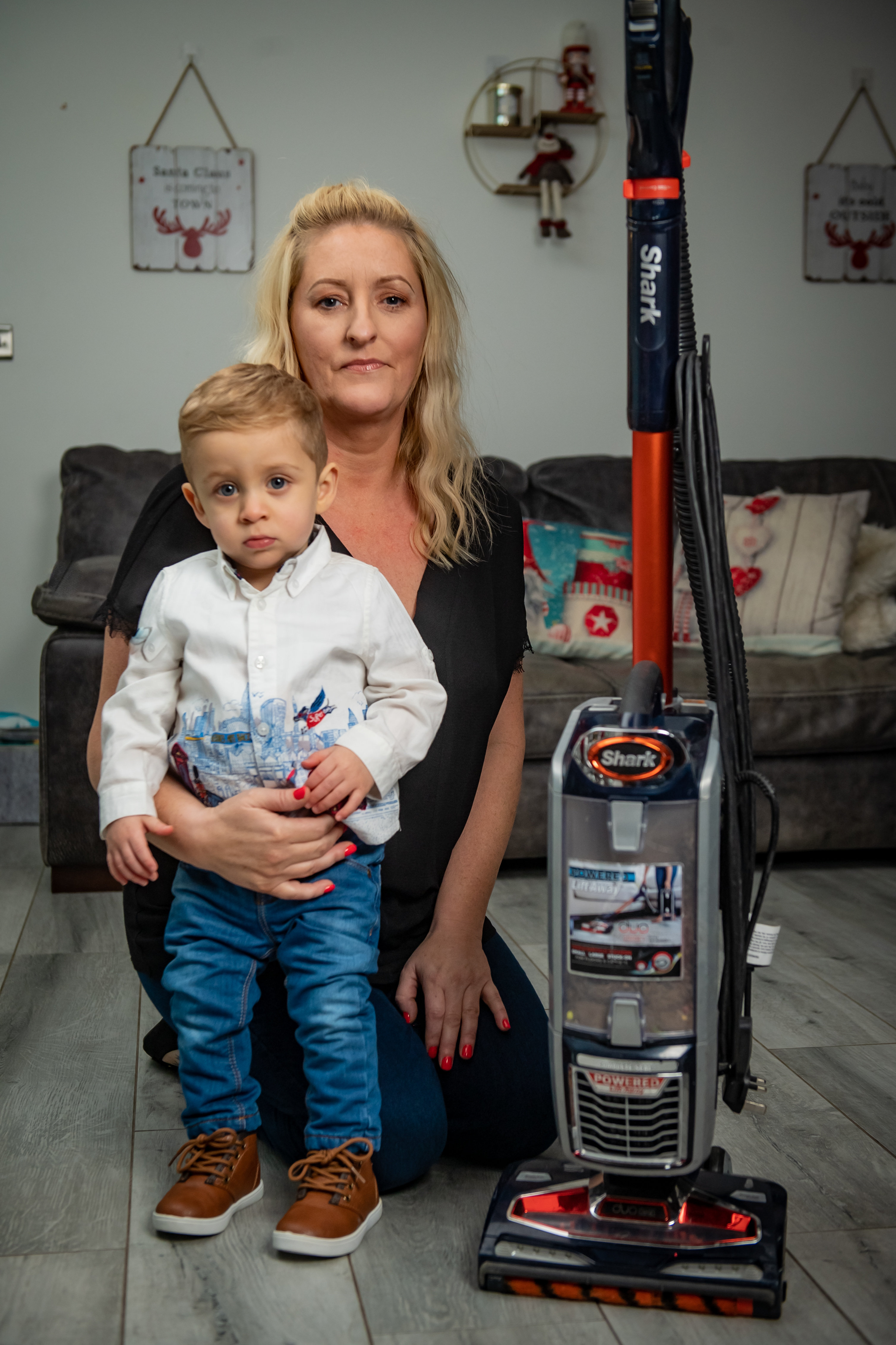 A mum has warned other parents to be wary after her little boy was seriously injured when his hand was sucked into the hooverCredit: SWNS:South West News Service 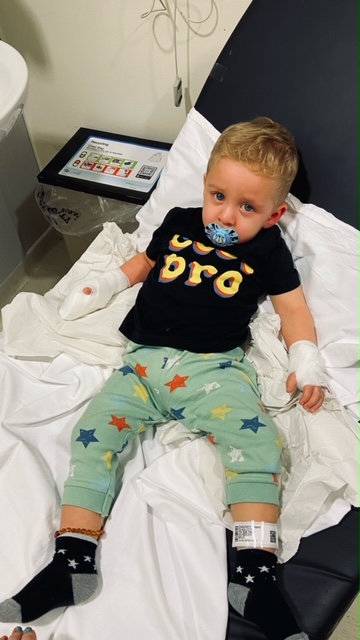 The powerful suction on the £199 Shark DuoClean cleaner sucked up his hand, leaving him with a horror friction burn on two fingers and his left palm.

He was treated for the burns in hospital, but back home developed a high temperature, diarrhoea and full-body rash.

The tot was diagnosed with toxic shock syndrome – a rare, life-threatening complication of bacterial infections which can kill in hours.

He endured a five-day stay on the childrens’ ward.

Housewife and mum-of-four Louise from Nuneaton, Warwickshire, is speaking out to warn of the dangers of high powered vacuum cleaners.

She said: “I couldn’t stop crying for days after; the pain he must have been in from this burn, it was heartbreaking.

“The vacuum was upright and switched off but he managed to kick it over and turn it on when my back was turned for a second.

“The next thing I’m hearing him screaming; the suction of it had sucked his hand up.

“It was literally in there five seconds but when I pulled him out he had burnt all his hand.

“It covered two of his fingers and about halfway down the palm of his hand.

“He was screaming and shaking and his sister was crying her eyes out too. It was just horrible.”

The accident happened when Louise turned her back to unplug the vacuum cleaner from the wall in the living room in October.

She rang for an ambulance and was told a paramedic would call her back, but after 15 minutes with a screaming 20-month-old she drove him to hospital.

They dressed his scorched hand and the next day he was taken to Birmingham Children’s Hospital to be treated with specialist silver dressings.

But Henri started vomiting and gained a high temperature, diarrhoea and full-body rash. 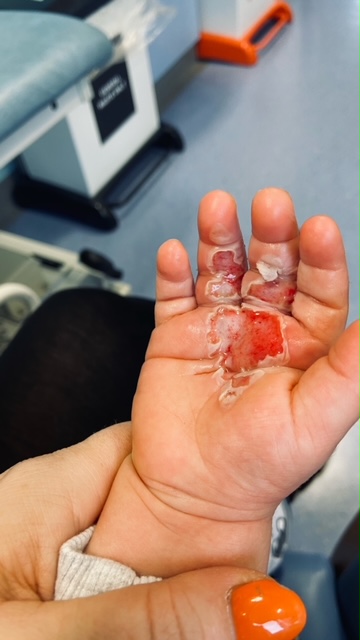 The £199 Shark DuoClean cleaner sucked up his hand, leaving him with a friction burn 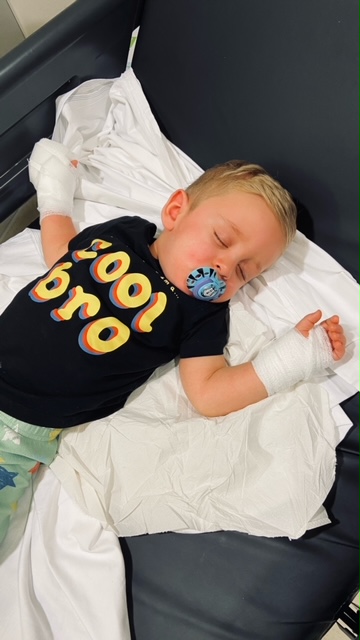 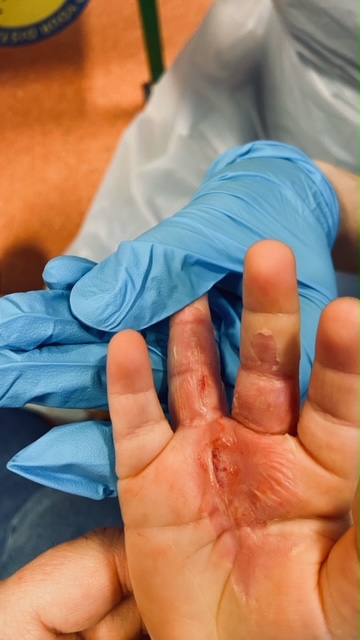 But after the tot returned home from hospital, he developed a high temperature and a full-body rash – and was then diagnosed with toxic shock syndrome 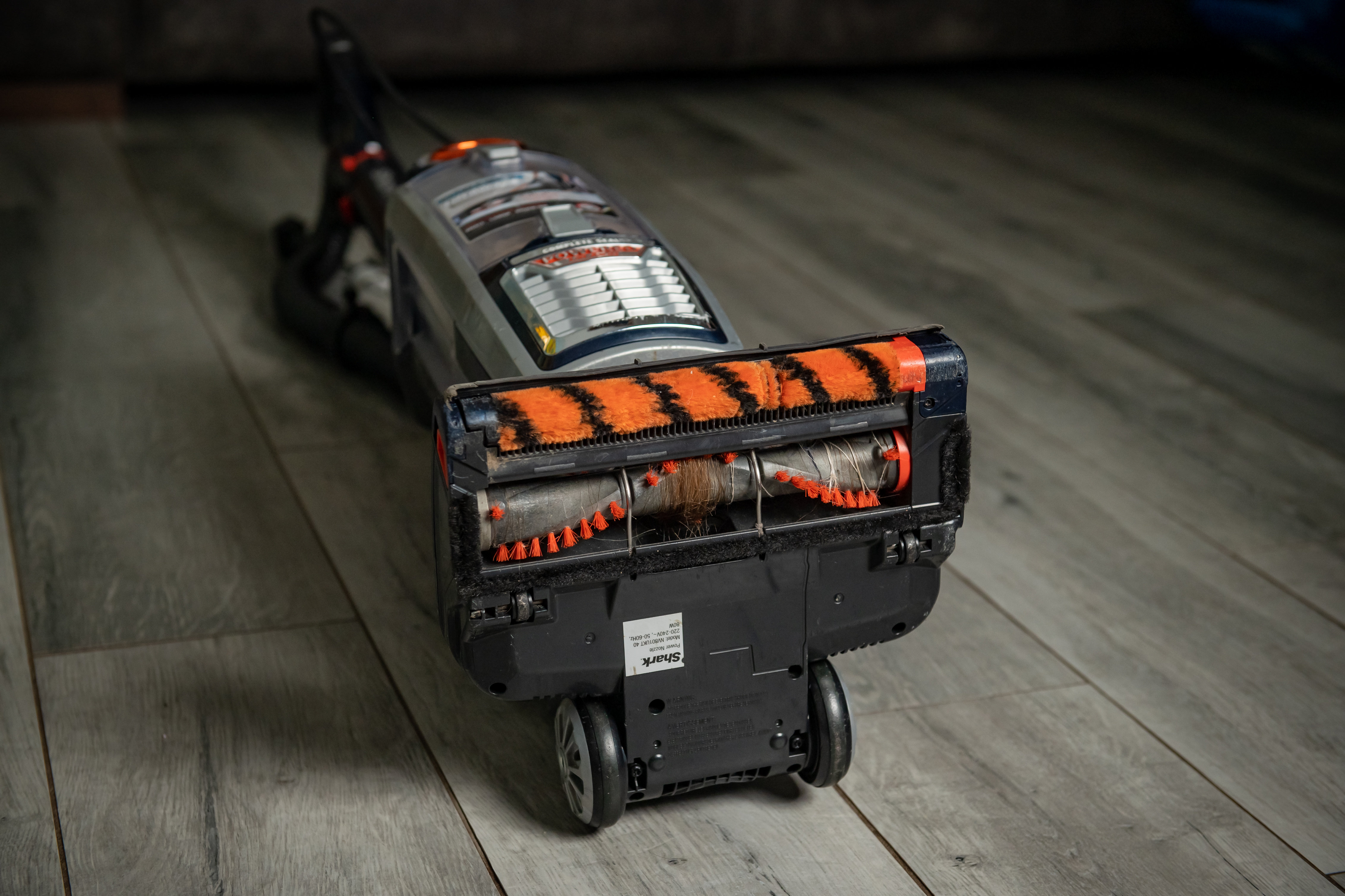 “I heard him vomiting in his cot and when I checked on him he was very hot but I just gave him some Calpol as I didn’t really think anything of it,” she said.

“I popped out with him later on but I could tell he was getting worse as he wasn’t drinking or eating the snacks I took with me.

“I took him home and laid him on the settee because he was very lethargic, and then wouldn’t eat his dinner when he was offered.

“I took his temperature and saw he was at 39°C so stripped him off and rang the children’s hospital and they advised me to give him Nurofen and to ring back within half an hour.

“This was when he started coming up in a rash and contracted diarrhoea so I rang the ambulance that came within five minutes.

“Because of the symptoms and his hand injury they knew immediately it was an infection of some sort.”

An ambulance took him to Walsgrave Hospital in Coventry where he was diagnosed with toxic shock syndrome.

The infection is commonly associated with tampon use however it can also be caught from burns, cuts or insect bites.

He was given intravenous antibiotics and fluids and taken to Birmingham Children’s Hospital for plasma treatment from a plastic surgeon.

“We didn’t know how the skin on his hand was going to go or whether it would even grow back straight,” she said.

“The skin could have grown back too tight or loose and affect his grip.

“He ended up being in hospital for five days as he was quite poorly – it was horrific for him and heart-breaking for me to see.

“He has still got some scarring now but fortunately it has healed well.”

He was screaming and shaking. It was just horrible.

Louise paid £199 for her Shark DuoClean Lift-Away vacuum cleaner less than two years ago from the Shark website.

She wants to share her experience so that more children don’t suffer similar consequences, and calls for Shark to change their vacuum design.

She said: “I think it’s a badly made product because that switch is so easy for any kid to turn on and there should be a safeguard at the bottom so they cant put their hand in.

“It also has a dangerous metal roller brush inside it and there is no safeguard for kids around that either.

“This model has a cord and a start button that can be pressed easily, but I also have the cordless newer version with a ‘push and slide’ button making it harder for a child to turn on – that should be on all their hoovers.

“I’ve read about the same thing happening with the same brand of vacuum and want to spread awareness about how dangerous it is for children.

“They could look at putting safer switches on – Henri likes the sound of the vacuum and I’m sure he’s not the only one.”

A Shark Ninja spokesperson said: “We are very sorry to hear about this accident and wish our customer’s son a full recovery.

“As with all brands, fast-moving parts under the vacuum cleaner can cause injury if they come in contact with human skin rather than the floor and we clearly advise in our safety instructions that the appliance is kept out of children’s reach at all times when plugged in.” 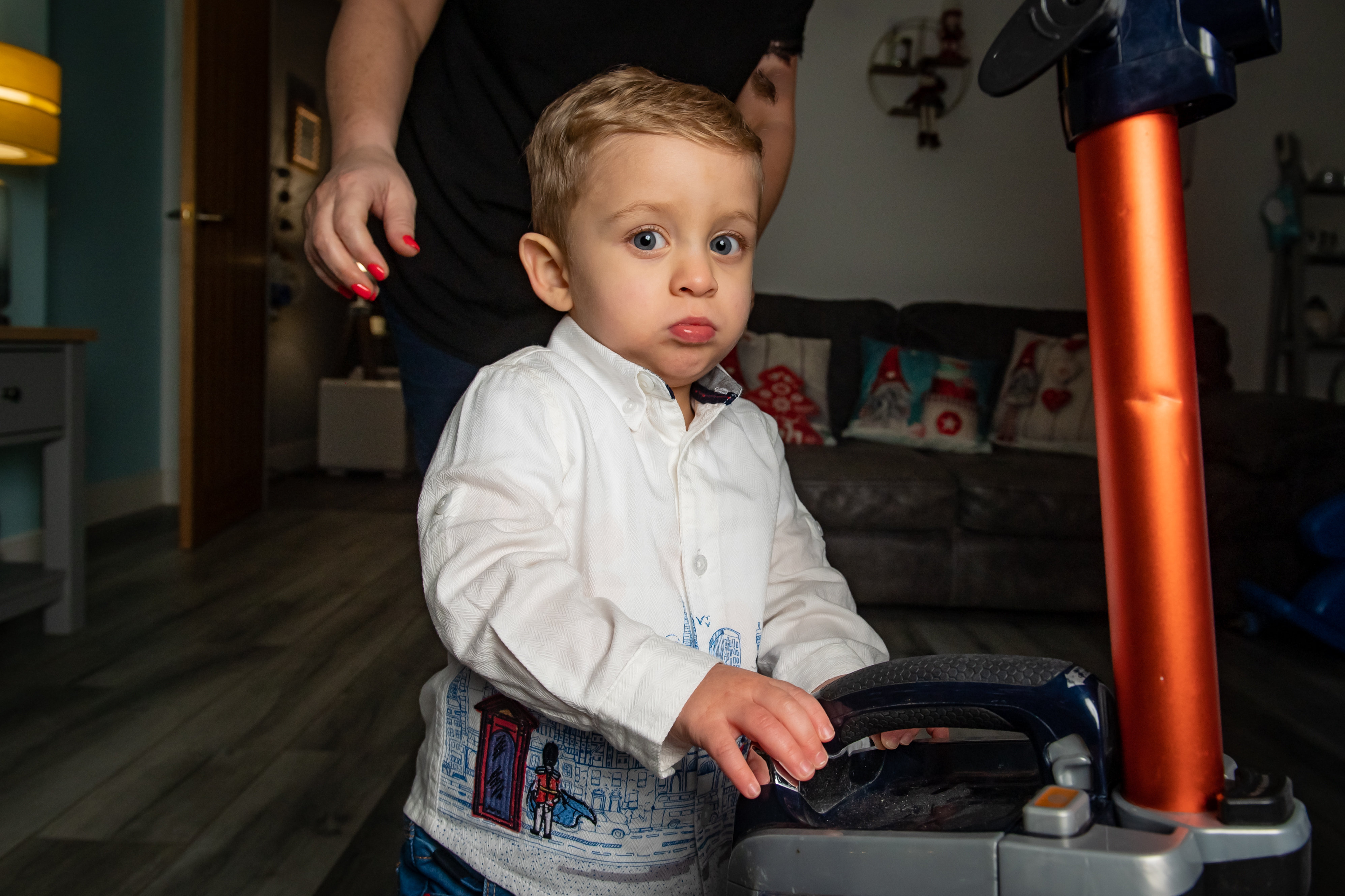 Little Henri is now on the road to recovery after an extended hospital stayCredit: SWNS:South West News Service 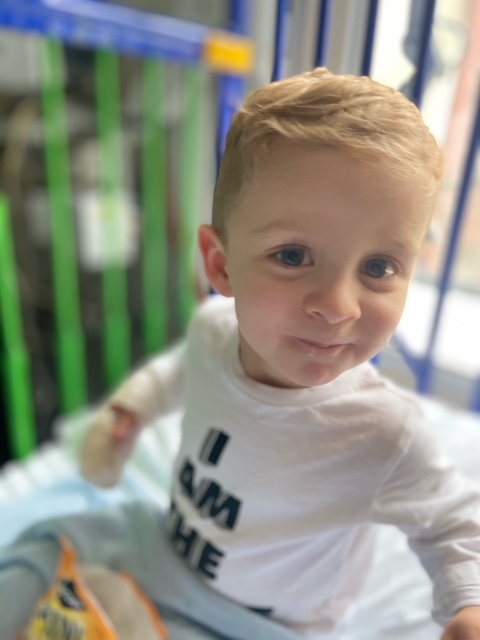 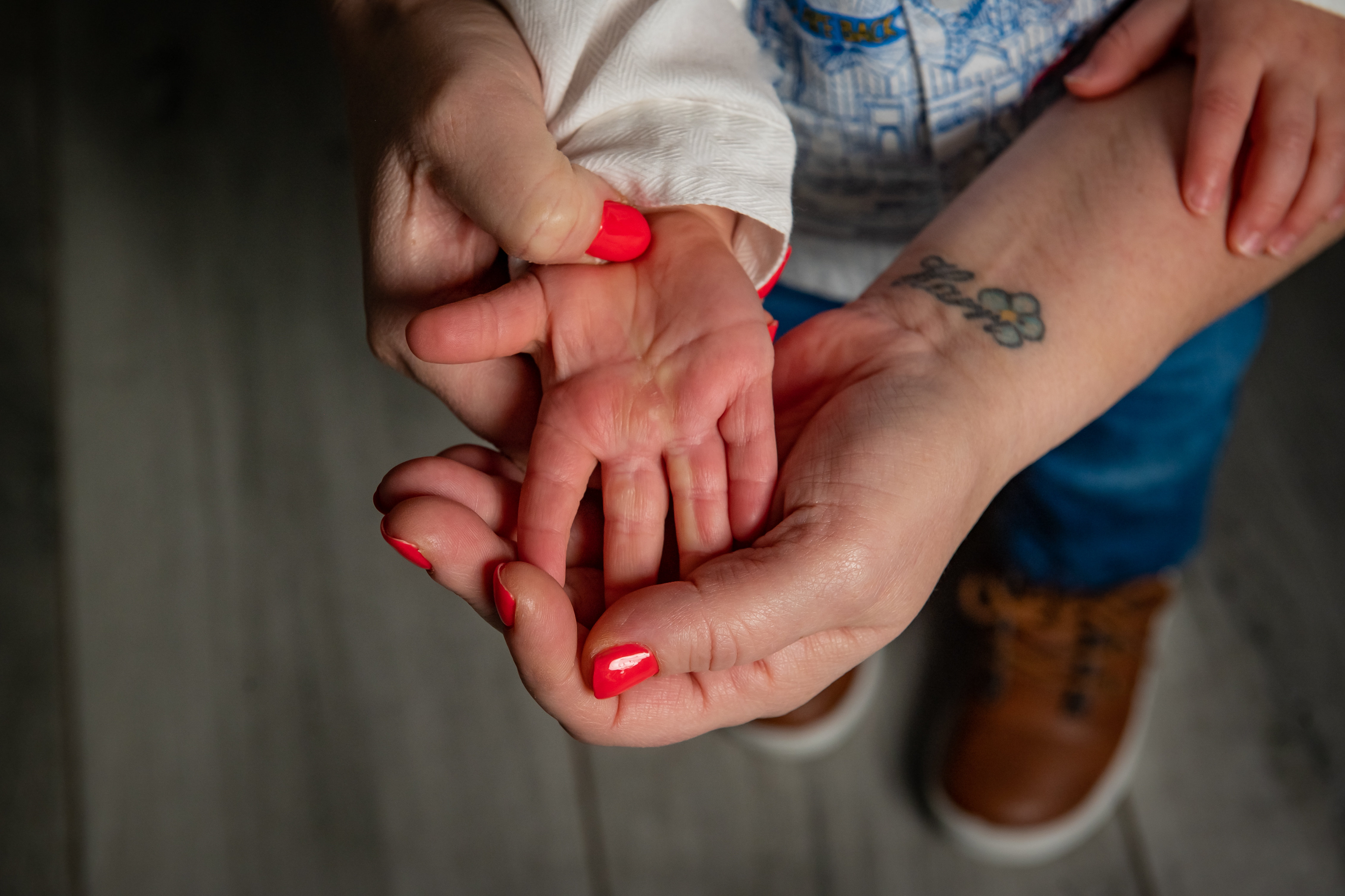 The toddler still has scars on his palm from the horrific accidentCredit: SWNS:South West News Service