Michael Betoin has cleared ruined apartments and repaired Ukrainian military vehicles after lending his support to the country (Picture: Michael Betoin/Boots on the Ground)

Michael Betoin has felt the shockwaves of ‘bone-rattling’ missile strikes that have landed a few hundred meters from his apartment.

Volunteering in the Ukrainian city of Kharkiv brings a high degree of mortal peril amid Russia’s daily bombardment of shelling and rocket fire.

The British volunteer, however, is going nowhere. He plans to stay with his ‘family’ in the city, which is located 25 miles from the border with Russia.

The 58-year-old is under no illusions about the dangers. Speaking to Metro.co.uk a few minutes after sirens and explosions rang out, he described how one missile landed 500 metres from his apartment and the compound where he repairs military vehicles has also been hit.

His work in the north-eastern city, the second biggest in Ukraine, includes patching up the 4x4s and helping to make kit for troops.

The former construction firm boss is around 10 miles away from Russian-occupied areas after moving on from Irpin and Bucha where he had been clearing homes wrecked during the brutal assault by Russian forces.

The dangers faced by international volunteers were driven home last month when another British man, Craig Mackintosh, was killed by Russian forces while on patrol with his squad near Kharkiv.

‘It’s a surreal life, you just carry on with things despite being right on the edge of a warzone,’ Mr Betoin says.

‘Every day, the Russians are just lobbing missiles into Kharkiv, they are not aiming at anything. I have had three or four close to my apartment block, at 12am this morning I nearly fell out of bed because one landed so close.

‘They are designed to freak everyone out and to keep stirring things up.

‘But as soon as one lands there are hundreds of Ukrainians clearing up and making repairs. It’s for morale and to show we are not standing for this.’ 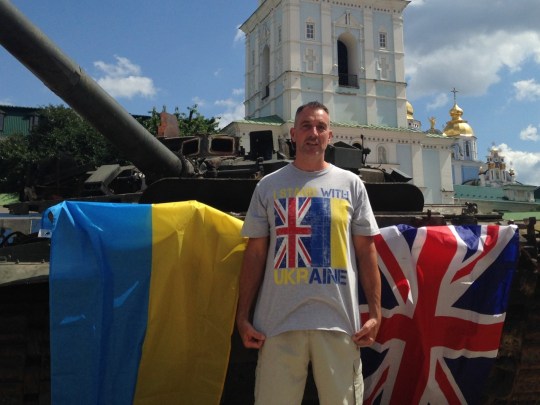 Michael Betoin displays his ‘I stand with Ukraine’ T-shirt in front of a captured Russian tank in Kyiv (Picture: Michael Betoin/Boots on the Ground)

Mr Betoin, from Grosmont, North Yorkshire, first drove out to Kyiv in a van loaded with essential humanitarian aid a few weeks after the Russian invasion began on February 24.

After returning to the UK, he flew out on the present trip, where he has put his construction expertise to use by joining an international group cleaning out the shattered homes in Irpin and Bucha.

The volunteer’s work now includes the rapid repairing and servicing at a secret, high-security location. 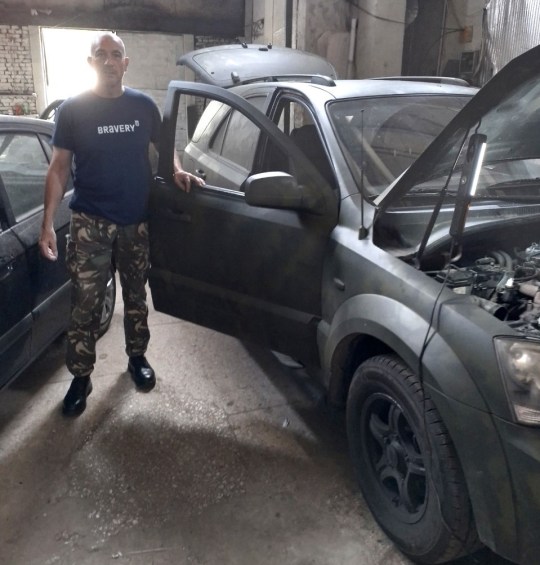 Michael Betoin has been repairing vehicles used by Ukrainian forces on the frontline near Kharkiv (Picture: Michael Betoin/Boots on the Ground) 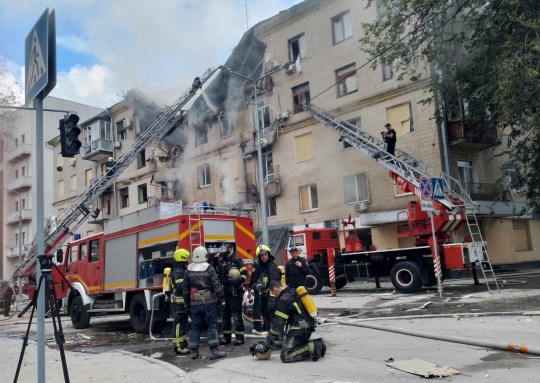 Some are riddled with bullet holes and mortar damage, and the soldiers can have blood on their clothes as they arrive, but the onus is on getting the vehicles back into operation as quickly as possible.

International donations are supporting the supply of vehicles, some of which have been sourced from the UK.

The seasoned traveller also works with the community in the city making camouflage webbing, sniper suits and other supplies for the military as well as helping to provide humanitarian aid.

He spoke after Mr Mackintosh, a 48-year-old medic from Norfolk, was killed on his second tour of the country, reportedly having been shot dead.

Mr Betoin, who is single with no children, has felt the ‘bone-rattling’ shockwaves from missile strikes near his apartment, which lies around a kilometre from the city centre. One attack on Monday left his ears ringing.

‘The military compound where we are working has been hit four times and there are cluster bombs still lying around by some of them,’ he says.

‘The closest one to my building was 500 metres away, it shook the building and all the power alarms were going off. It’s bone-rattling, the shockwaves shatter windows for 300 metres around.’ 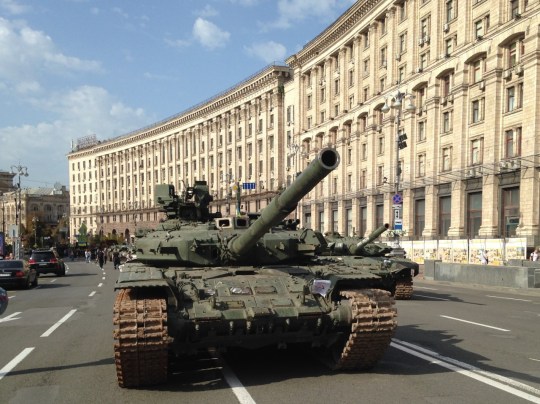 A ‘parade’ of captured Russian tanks in Kyiv ahead of Ukraine’s Independence Day (Picture: Michael Betoin/Boots on the Ground) 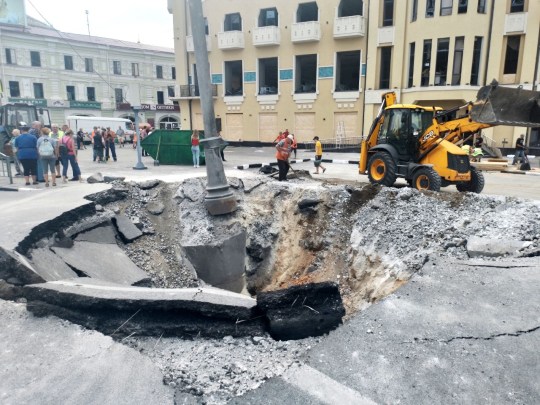 A crater resulting from a Russian missile strike in Kharkiv city centre (Picture: Michael Betoin/Boots on the Ground)

Mr Betoin is blogging about his time in Ukraine, documenting scenes such as fields of sunflowers and burnt-out Russian tanks as well as the ‘devastating’ impact of the war on ordinary people.

‘For me, the mission outweighs the risks,’ he says.

‘I want to be where I can get stuck in and do the most good today, not a week or a month’s time, and I plan to be here for the long-haul.

‘The strength of the people around here and the unity they have is frankly mind-blowing. Some of the guys working in the compound don’t even flinch when a missile explodes, it shakes the roof and they just carry on working on the cars. All the Ukrainians speak to us and look after us and it feels like a family to me now. 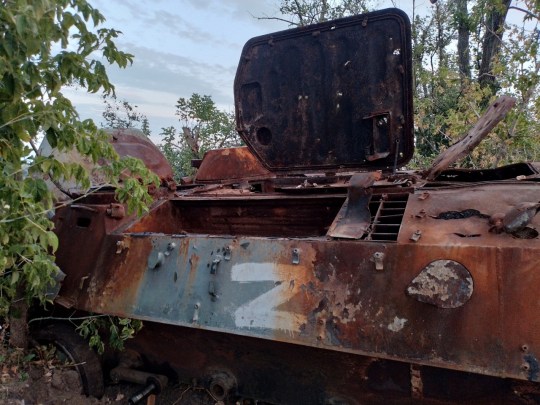 A burnt-out Russian troop carrier in Vil’khivka, a village in Kharkiv Oblast (Picture: Michael Betoin/Boots on the Ground) 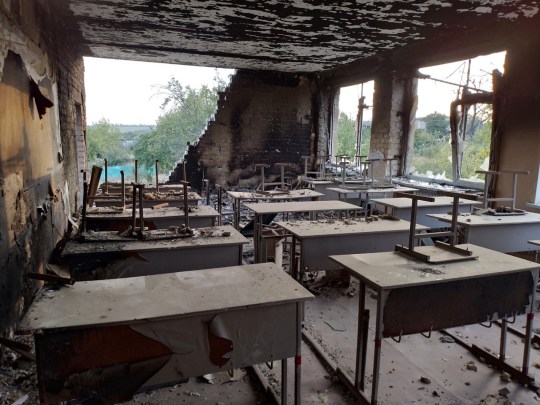 The charred shell of a classroom in Vil’khivka, one of the villages bombarded by Russian forces (Picture: Michael Betoin/Boots on the Ground)

‘The fact you’re British counts for a massive amount because of what Boris Johnson has done and they’ll embrace you, I’ve had people shake my hand in tears and say thankyou for helping us.

‘There’s a great camaraderie and a feeling that we’re all in this together.’

Mr Betoin, who retired early from the construction industry, first got the van together to take £7,000-worth of supplies to the Polish border and western Ukraine in the early phase of the war.

He returned after around four weeks and is now two months into his second spell in the country. 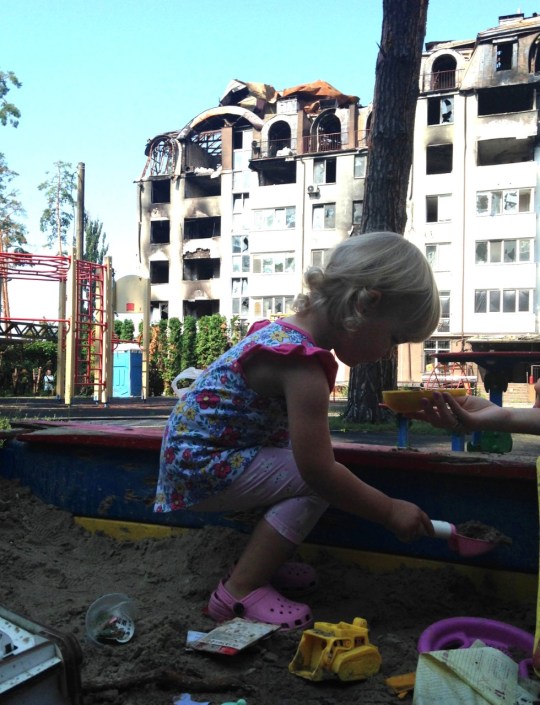 A girl plays in a sandpit in front of her war-damaged apartment home in Irpin (Picture: Michael Betoin/Boots on the Ground)

Internationally-banned cluster munitions have been used by Moscow’s troops, killing and injuring scores of civilians, a damning investigation by the human rights organisation found.

In the past 24 hours, intensive Russian shelling and air strikes have hit settlements to the north-east of Kharkiv, according to the Live Universal Awareness Map news service.

The city lies on the northern tip of eastern Ukraine that Moscow is trying to wrest from Ukrainian control after the aborted attempt to seize Kyiv.

The resolve shown by soldiers in Kharkiv, who successfully defended the city and retook surrounding villages in the first weeks of the war, is reflected in the counter-offensive taking place in the south. 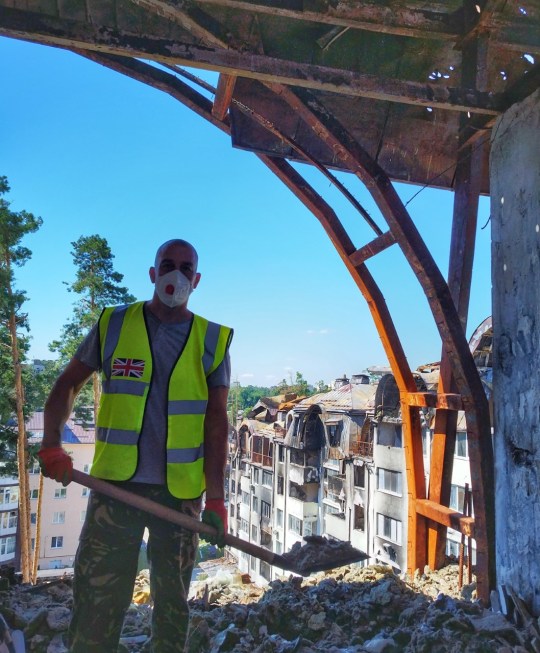 Michael Betoin working to clear out apartments in Irpin after the city was liberated from Russian forces (Picture: Michael Betoin/Boots on the Ground)

Unconfirmed reports tonight suggest that Ukrainian forces have launched a surprise attack around 43 miles south-east of the city, targeting the Russian-held town of Balakliya.

‘This isn’t just a war for Ukraine, this is a war for the world,’ he says.

‘A message has to be sent out that Russia can’t just march into countries and take them over.

‘Ukraine has an incredible identity, which I’ve learnt more about since I’ve been here, and they are fighting for the whole of humanity.’