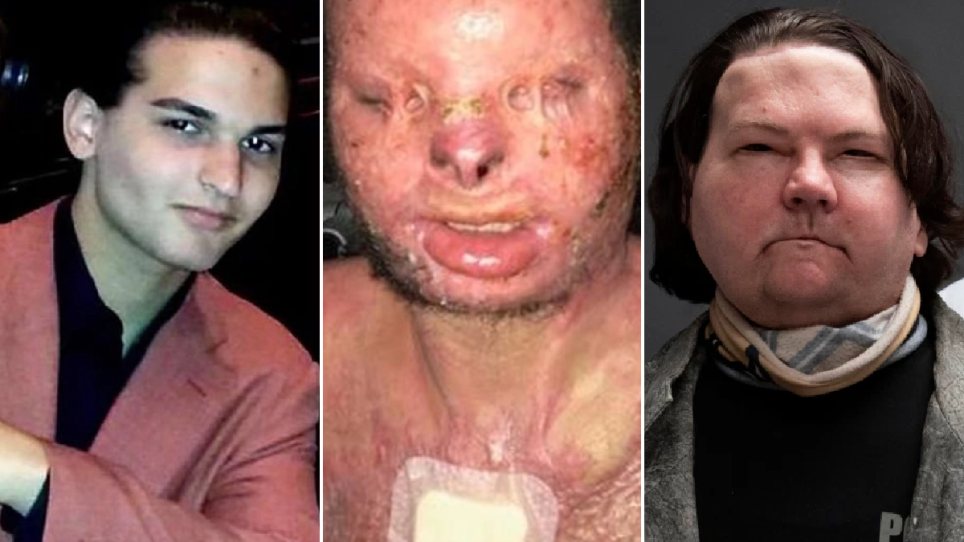 Joe DiMeo has received a groundbreaking face and hands transplant after being terribly burned in a 2018 car crash (Pictures: AP/GoFundMe)

A driver who was terribly burned after falling asleep behind the wheel and crashing his car has shown off the results of his face and hand transplant. Joe DiMeo, 22, underwent the grueling surgery at NYU Langone Health Center in New York City last August, and has now recovered sufficiently to share the results.

Joe told Good Morning America: ‘When I saw my face for the first time, it didn’t hit me. It didn’t seem real at first. The swelling comes down every day. I see my cheek bones now.’

He also said he hoped to meet his donor’s family someday, adding: ‘I’m grateful for them to give this gift to me – I don’t know how to thank someone that gives you a second chance at life.’

Joe was driving home from a night shift at the pharmaceutical company where he worked in 2018 when he fell asleep and crashed. He was pulled from the burning wreckage of his car, and underwent multiple life-saving surgeries. 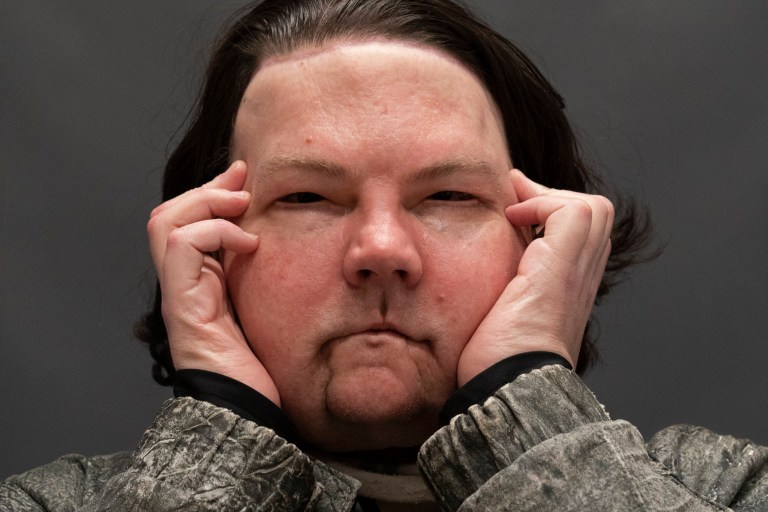 Joe’s face and hands transplant is the first to have proven successful, although he must take powerful drugs for the rest of his life to stop his body rejecting the donated parts (Picture: AP) 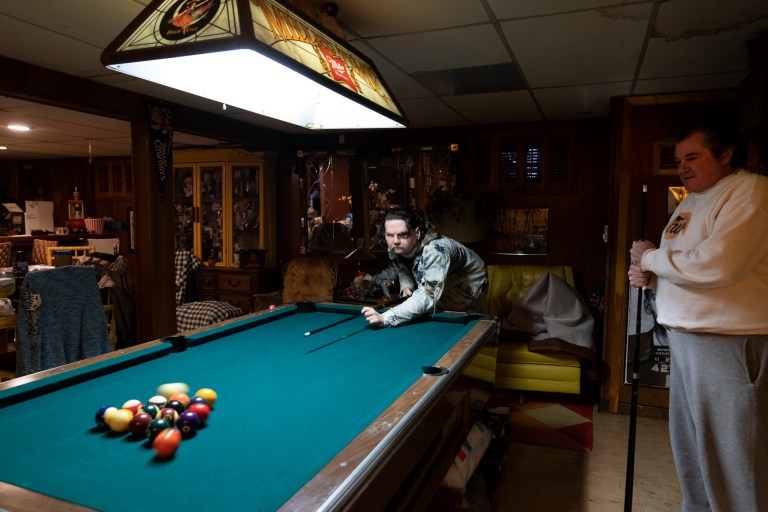 Joe’s hand transplant was such a success that he is now able to play pool with his dad again (Picture: AP)

The smash left Joe with burns to 80% of his body, burned his lips off, fused his eyelids together and forced doctors to amputate his fingertips.

Doctors said those operations left him with a 6% chance of finding a new facial match, but an unnamed donor from Delaware was found last August.

That man also provided his hands, with Joe the first person ever to successfully receive a face and hands transplant at the same time, from the same person.

Joe underwent a 23 hour surgery that involved 16 doctors, and took place across two different operating rooms. The groundbreaking procedure appears to have been a success, with Joe’s body accepting his new face. 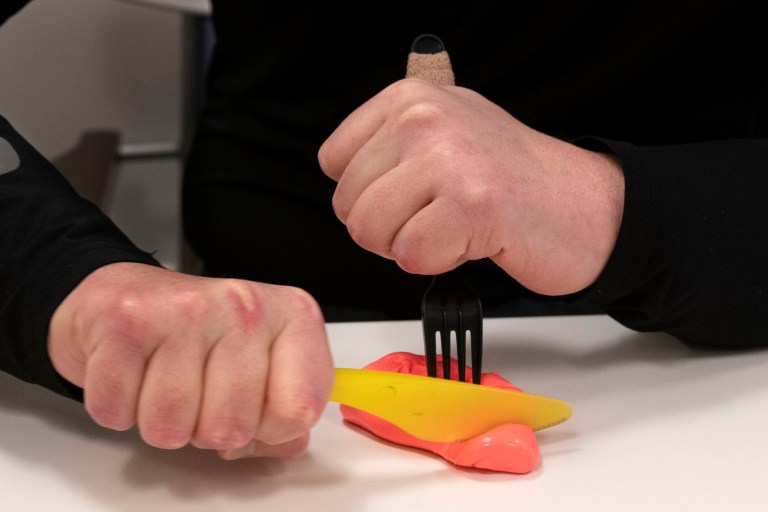 Joe has undergone intensive physical therapy, and now has sufficient dexterity to use a knife and fork… (Picture: AP) 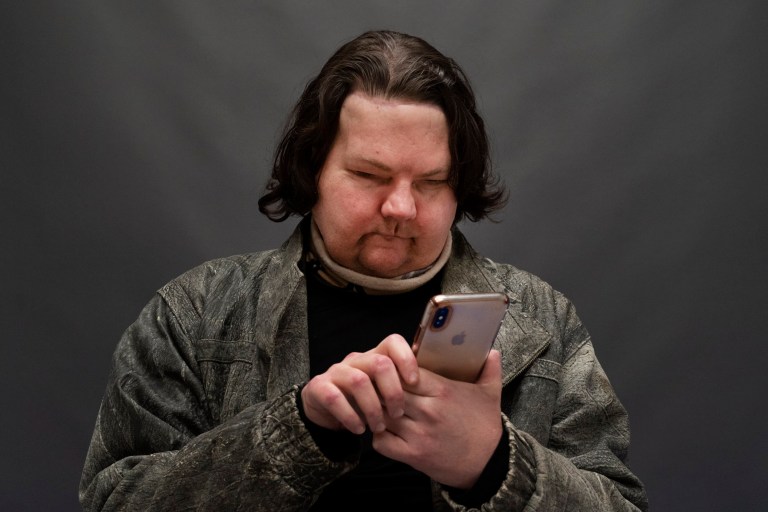 Extensive physical therapy means Joe’s new hands are fully functional, and allow Joe to eat with a knife and fork, use a phone and even play pool.

He must take powerful medication for the rest of his life to stop his body rejecting the transplanted parts, with those drugs putting Joe at higher risk of diseases including cancer.

Joe says he is fully aware of the potential hurdles he still has to overcome, saying: ‘I knew it would be baby steps all the way. You’ve got to have a lot of motivation, a lot of patience. And you’ve got to stay strong through everything.’

Joe’s dad John also shared his happiness at his son’s new face, saying: ‘From the moment after the operation, when we walked through that door… that’s him now.’ 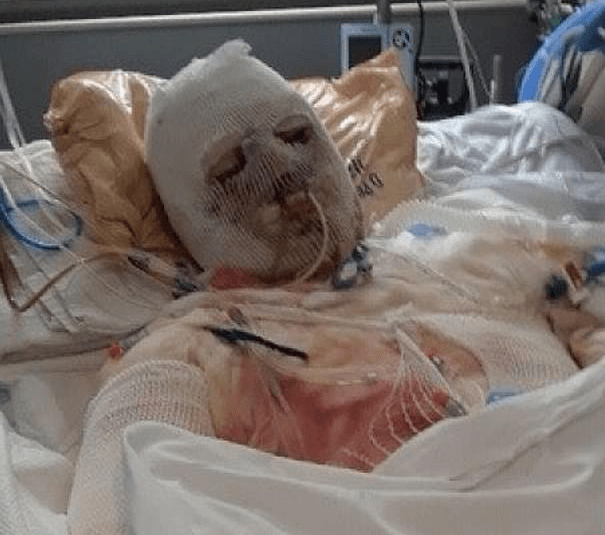 Joe suffered horrific burns to 80% of his body after crashing his car, with doctors warning he only had a 6% chance of having a successful face and hand transplant (Picture: GoFundMe)

The first simeltaneous face and hand transplant was attempted in Paris in 2009, but that patient died a month later.

Doctors in Boston tried it on chimpanzee-mauling victim Charla Nash in 2011, but her body rejected the donor hands, and they were removed.

Isabelle Dinoire received the world’s first face transplant in France in 2005, and died of cancer in 2016.

Experts say at least 18 face transplants have been carried out since, and 35 hand transplants.