A carer has admitted sneaking into an elderly dementia sufferer’s house at night.

Claudia-Simona Groza was caught rifling through the 91-year-old’s pockets in the early hours after suspicious relatives installed a CCTV camera.

The family took extra security measures when they noticed cash seemed to be going missing in the middle of the night.

A camera was installed after social services used motion detectors to show movement inside the house seemed to coincide with money going missing.

Footage captured at around 2am on July 16 showed Groza letting herself into the home of her former patient, rooting around in a coat pocket before leaving, apparently empty handed.

Relatives quickly figured out she must have entered the Ruddington, Nottingham, property using a key kept in a code-protected safe box outside.

Groza, 48, of Clifton, Nottingham, was arrested a few days later and charged with burglary.


The victim’s family became suspicious when money seemed to be vanishing in the middle of the night (Picture: Nottinghamshire Police/SWNS)

She pleaded guilty to the offence on Wednesday at her first appearance at Nottingham Magistrates’ Court.

In a statement, the victim’s daughter said: ‘As a family, we were aware of money going missing over the period of a few months.

‘This was very upsetting for us all. It appeared someone was entering the property during the night.

‘We installed cameras and were distressed but pleased that we were able to catch the person in the act. 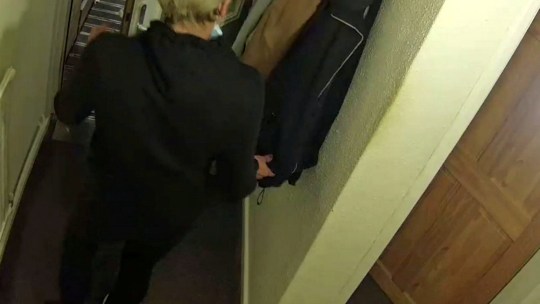 Motion detectors were installed first, before a secret camera was put in above the front door (Picture: Nottinghamshire Police/SWNS)

‘We will continue to support dad through this, he’s been very uneasy since it happened and we try not to mention it in front of him. We thank the police for their prompt response and arrest.’

Detective constable Liam O’Kane said: ‘Carers are a lifeline for many vulnerable people across the county, particularly over the last 16 months during the coronavirus pandemic when families haven’t been able to visit as often as they normally might.

‘Most carers are a vital support network for families and incidents like this are incredibly rare. 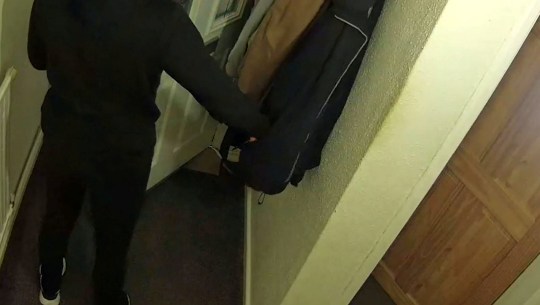 Family members were stunned when they saw a former carer rummaging around in a coat pocket (Picture: Nottinghamshire Police/SWNS)

‘Groza was in a position of trust and was supposed to be looking after her victim but instead she burgled his house for her own personal gain.

‘We take reports of burglary very seriously and will always carry out a robust investigation.

‘This has led to Groza quickly admitting the offence due to the strength of the evidence against her.

‘I hope the victim and his family can find some comfort from this.

‘They have rightly been left shaken by the incident and we have been working with them to ensure they get the support they need.’