GUIDE Dogs has committed to supplying more than 3,500 visually impaired children with free iPads and iPhones after research revealed the damage caused to their personal development by a lack of access to technology.

An in-depth study saw the charity interview 170 parents and guardians of children aged under 12 who had a vision impairment.

More than a quarter (28 per cent) said their child has been bullied – with eight per cent saying their child is doing badly at school.

And 80 per cent felt their child’s vision impairment made it a difficult or even impossible to form friendships.

Overall, 28 per cent of children were described as not happy, while 40 per cent had little or no confidence.

One of the key take outs from the interviews were tools like iPads and smartphones could vastly improve children’s happiness, by providing a sense of normality, confidence, and independence.

The technology can also foster sensory and stimulating learning styles which, for many children with visual impairment, is the most effective and impactful way of learning.

But technology availability for children with vision impairment is a weakness in mainstream schools.

Just half of parents and guardians of children at mainstream schools surveyed felt their school used the latest technology to help children with vision impairment – compared to 67 per cent of those at a specialist school.

And while 35 per cent of parents and guardians had accessed technology grants, 37 per cent would like to but were unable.

As a result of the study, Guide Dogs is launching ‘Tech for All’, where the charity will provide assistive technology to all children with vision impairment aged 3-18 in UK.

Kamsi Agbedo, a nine-year-old from East London, who has ocular albinism, a condition which reduces the colouring (pigmentation) of the iris, and the retina, was previously given an iPad by Guide Dogs through a special grant by the charity.

Her mum, Eremina, said: “Kamsi is really into technology and we have a family laptop, but it’s quite functional.

“She could only really use it when I was sitting with her and she would have to ask me to do lots of the actions for her.

“She really wanted an iPad but I couldn’t afford to get her one. We applied for a grant from Guide Dogs, with a supporting letter from her visual impairment teacher. 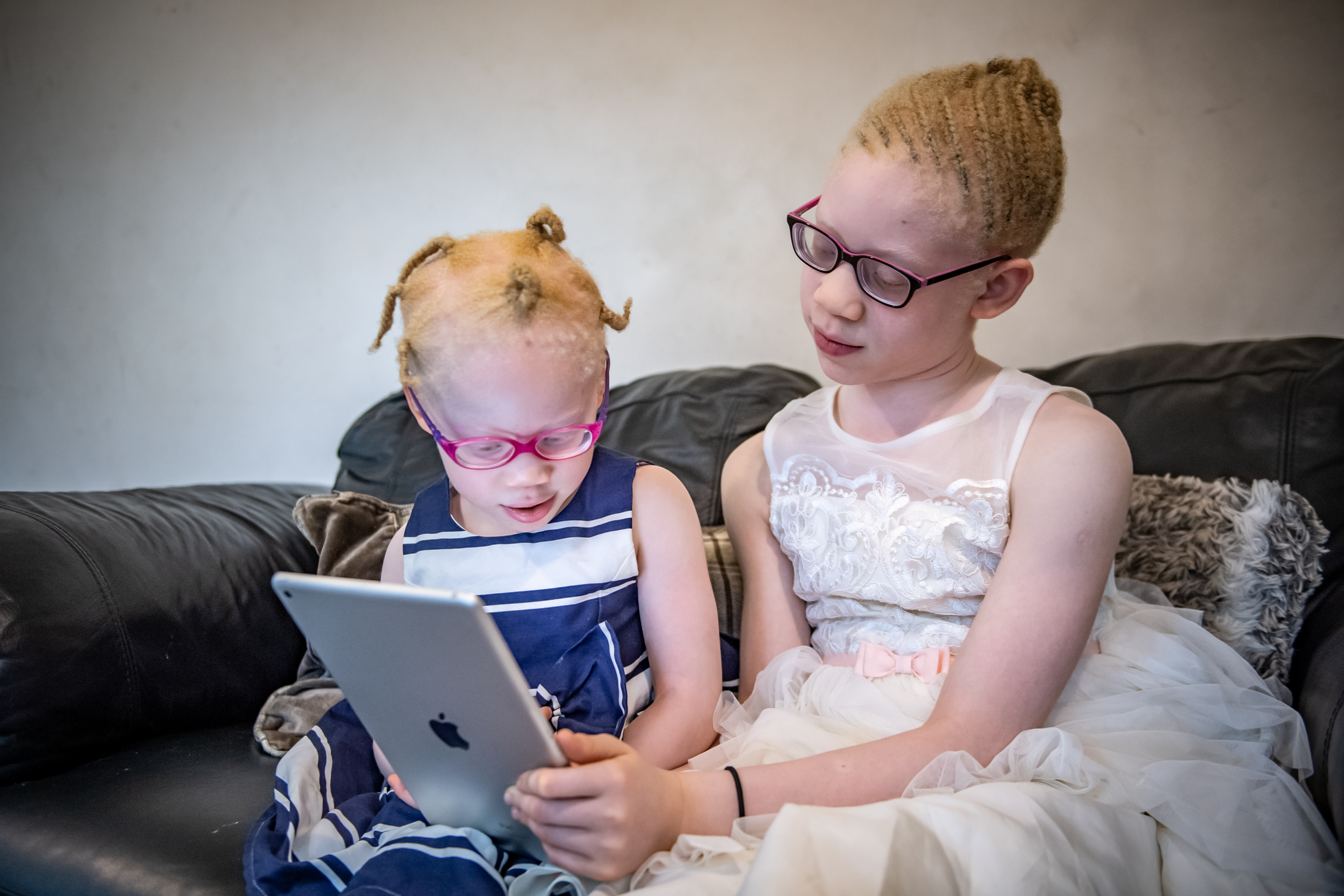 “We didn’t realise all the different ways an iPad could help her until we had it. She’s quickly learnt how to use the technology herself.

“The iPad is really user friendly and she can navigate between screens herself, she’s learnt to use passwords, and can enlarge text and images to a size that works for her.

“There are the obvious education benefits, like reading e-books, but it’s mostly about her being able to play and have fun – which is really important for all children.

“She can use the iPad herself, which gives her independence, and she can find out what activities she enjoys doing.

“She loves playing wordsearch apps, which have the added benefit of developing her reading and quizzing skills.”

Kamsi now has access to the internet and has been researching albinism, which has helped her learn about her condition and enable her to discuss it with her mum, improving her communication skills and knowledge.

She also uses FaceTime to keep in touch with her grandma, dad, and uncle.

Her three-year-old sister, Nnenna, has the same condition and she will also eventually receive an iPad from Guide Dogs as part of Tech for All.

Eremina added: “As parents of children with a vision impairment there can be so many hurdles we have to jump through to get the equipment and support they need.

“To hear that we just need to provide Nnenna’s certificate of visual impairment removes a lot of the stress and anxiety.

“While she’s only three, having a device of her own to learn skills early in life will be really beneficial.”

Vision impairment is a growing issue in the UK. Every hour another person in the UK goes blind and sight loss is profoundly distressing and isolating for those who experience it.

For children with sight loss and their parents, early intervention from Guide Dogs is lifechanging.

Pete Osborne, director of operations, Guide Dogs, said: “Technology is a great enabler and grants children a sense of normality, confidence and independence both socially and academically.

“The faster technology moves, the better their wellbeing. However, technology is still not accessible enough and this can be frustrating for both child and parent.

“Parents and guardians feel vision impairment can make it harder for children to make friends and parents stress that socialisation with other children is a vital part of their child’s development.

“Tech for All has been designed to enable children with sight loss to be more independent and do whatever it is they want to do or what their friends are doing.

“Whether it is Facetiming their mates, playing games, reading or learning, the accessibility features on an iPad or iPhone can be key to unlocking a child’s world and maximising their potential.”

BT will also be providing learning activities for the Apple devices to ensure each child or young person can get the most from their device, helping them to live independently.