It is the biggest daily increase in confirmed cases of the new strain so far (Picture: Getty)

A further 633 cases of the Omicron coronavirus variant have been reported across the UK, bringing the total number to 1,898.

Of those, 618 were detected in England, 11 were recorded in Scotland and two were found in Wales and Northern Ireland.

It is the biggest daily increase in confirmed cases of the new strain so far, after 448 new infections were recorded yesterday.

The latest update from the UK Health Security Agency comes after scientists advising the Government warned that tougher restrictions may be needed to prevent the Omicron variant causing up to 75,000 deaths in England over the next five months.

Experts from the London School of Hygiene & Tropical Medicine (LSHTM), who also sit on the Scientific Pandemic Influenza Group on Modelling (SPI-M) or the Scientific Advisory Group for Emergencies (Sage), used experimental data to look at how the new strain may transmit as the country heads into 2022, and predicted a large wave of infections in January.

Even under the most optimistic scenario, it could lead to a peak of more than 2,000 daily hospitalisations, with 175,000 hospital admissions and 24,700 deaths forecast between December 1 this year and April 30 next year.

The most pessimistic scenario looked at by the modellers – high immune escape from vaccines and lower effectiveness of boosters – projects a wave of infection which is likely to lead to a peak in hospital admissions around twice as high as the peak seen in January 2021, if no additional control measures are taken.

This could cause 492,000 hospital admissions and 74,800 deaths, according to the study, which has not yet been peer-reviewed. 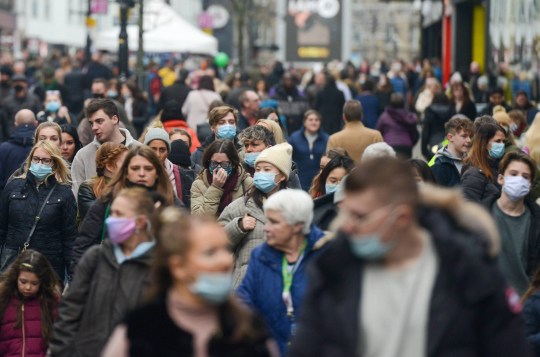 Prof Hunter said he suspects these models ‘overstate’ risk of hospital admissions and deaths and the ‘worst case’ scenarios are ‘unlikely to be seen’ (Picture: North News & Pictures)

Professor Paul Hunter, professor in medicine, University of East Anglia, said any model is ‘only as good as its assumptions’, adding that one key assumption in this model is that severity of disease outcomes for Omicron is the same as for Delta.

He went on: ‘Although we will not know for certain for a few weeks indications from South Africa do suggest that Omicron does cause less severe disease than Delta.

‘There is also early as yet not peer reviewed data suggesting that although Omicron mutations are enough to escape antibody, T cell immunity would be less compromised.

‘It is thought that T cell immunity is more important for reducing risk from severe disease than it is for reducing the milder nose and throat infections.


‘If Omicron is indeed associated with less severe disease as is, in my view, likely to be the case then these models would overestimate hospital admissions and deaths, possibly substantially.’

Prof Hunter said he suspects these models ‘overstate’ risk of hospital admissions and deaths and the ‘worst case’ scenarios are ‘unlikely to be seen’.

He added: ‘As better data becomes available in coming weeks we can expect these models to be refined.’