Covid: Autumn warning as hospital admissions ‘could hit 7,000 a day’

Boris Johnson has been urged to bring in measures soon or risk a huge spike in hospitalisations (Picture: AFP/PA)

Up to 7,000 people could be hospitalised with Covid every day in England next month unless a ‘basket of measures’ are enforced, scientific advisers have warned.

But the prime minister did not rule out more lockdowns, saying he would do whatever was necessary to ‘prevent the overwhelming of the NHS’.

He also confirmed ministers were preparing a ‘Plan B’ if there was an unmanageable spike in cases.

This could see the introduction of vaccine passports for large events, the return of mandatory face masks and advice to work from home once again.

However, experts on the Sage advisory committee have urged the government to act now, with cases and deaths all higher than a year ago.

Recent documents show they expect infections to rise during autumn and into winter, with daily hospitalisations potentially peaking between 2,000 to 7,000 in England next month.

This would far surpass last winter’s peak of 4,500 across the UK. There are currently up to 1,000 being admitted to UK hospitals with Covid each day. 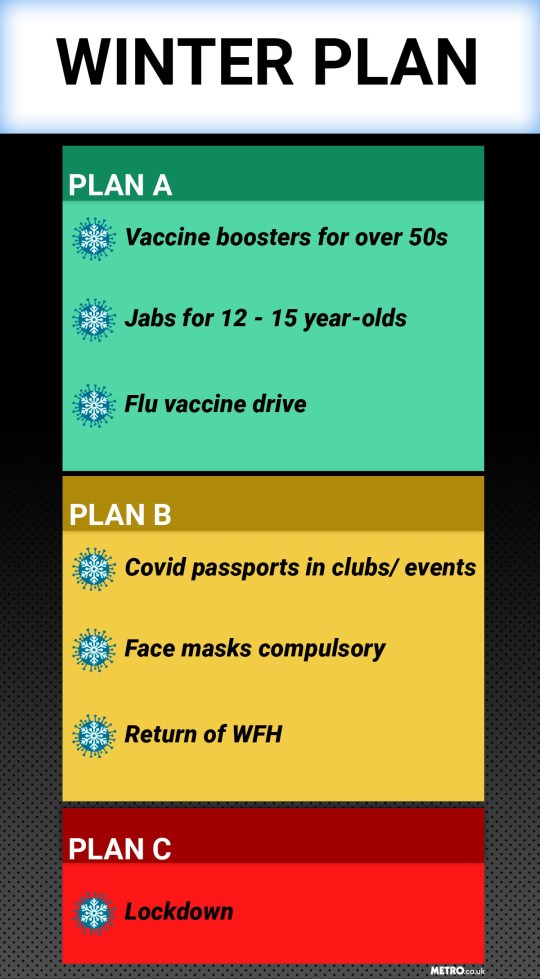 But this ‘very difficult winter’ could be avoided if measures are implemented early enough, the Sage documents say.

‘With the current levels of high prevalence combined with unknown behaviours, the burden on health and care settings could rise very quickly,’ the scientists warn.

Just over 80% of UK adults have received both jabs, but nearly six million people are still unvaccinated and vulnerable to the highly-transmissible Delta variant.

Health Secretary Sajid Javid this morning defended the government’s Covid winter plan after this latest warning from scientists, saying there were no ‘risk-free’ options.

‘It is right that experts are looking at what is happening and come up with their best guess of where things might go based on certain assumptions,’ he told Sky News.

‘We have to listen to them but eventually make what we think is the right decision. There is no risk-free decision but I think what we have announced in terms of this plan, is well thought through.

‘It is the act of a responsible Government to set out this is our plan, this is how we are going to protect the gains, but just in case things are not quite as we want them to be we have got to have another plan and get that ready too.’