Police said they were met with ‘hostility’ from demonstrators (Picture: PA/Getty/Rex)

Eleven people have been arrested after a protest against coronavirus restrictions ended with scuffles with police.

Video from Parliament Square in London showed some demonstrators on the ground while police attempted to hold back crowds.

The Metropolitan Police said that officers were met with ‘hostility’ by protesters who had blocked and road, forcing traffic to stop on what has been dubbed ‘Freedom Day’.

Most restrictions have been lifted in England from today, with nightclubs able to reopen from midnight and people now able to meet with large groups indoors. Legal requirements to wear face masks have been removed, although businesses may still ask them to be worn.

However, many protesters remain angry at the handling of the pandemic, with a large proportion concerned about vaccines.

Footage posted on social media shows clashes with officers in the middle of the road on Parliament Street near Westminster Underground station, where hundreds of demonstrators had gathered. 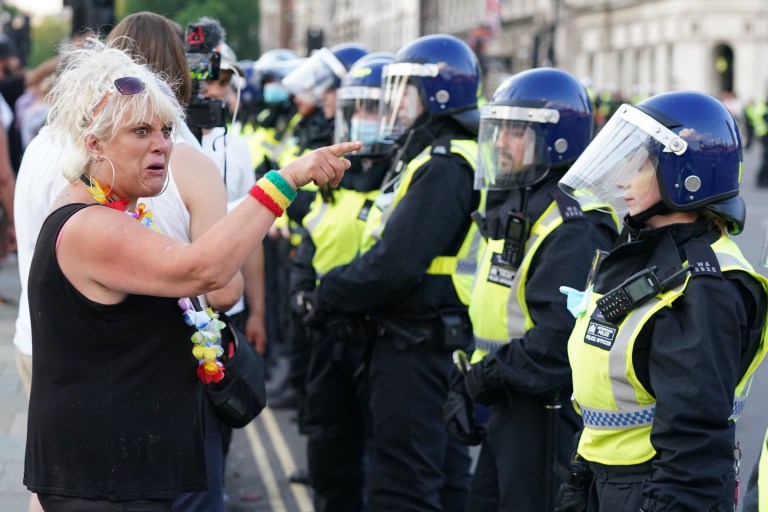 A woman gestures at officers during the protest (Picture PA) 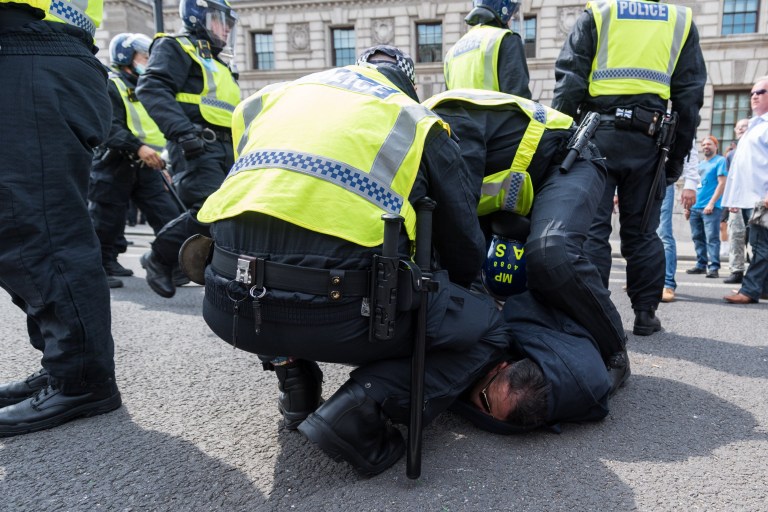 Police officers arrest a demonstrator during the protest against lockdowns and Covid-19 vaccines outside the Houses of Parliament (Picture: Getty) 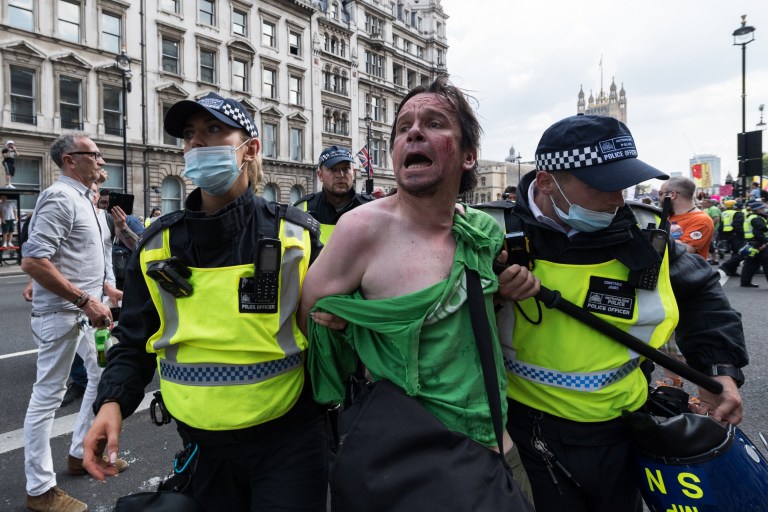 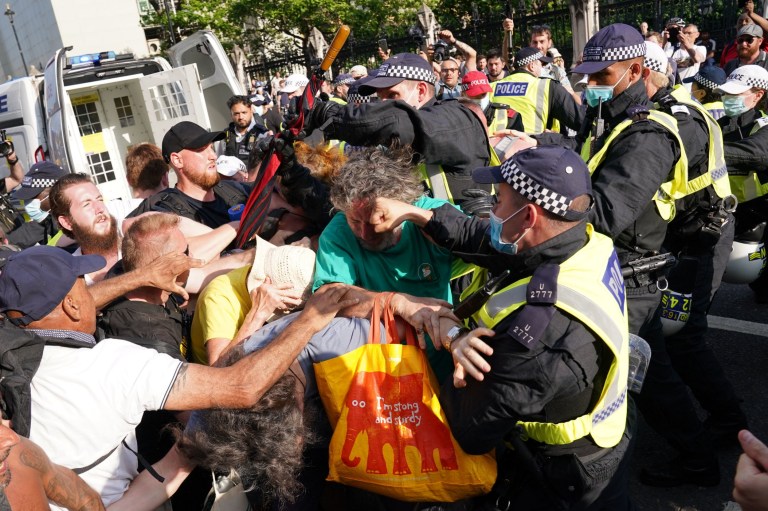 Bottles were thrown in the direction of officers, many of whom were wearing helmets, and demonstrators shouted abuse at police in sweltering temperatures in the capital.

Dan Andersson, a 61-year-old entrepeneur from Oxford, joined the protest which he said was ‘a petition to lodge a complaint against the erosion of our civil liberties’.

‘I have two teenage boys – I see this as me fighting for them and their futures,’ he said.

‘Close to Parliament Square there was a stand-off against an impromptu line of petitioners – some pushing and shoving, a couple of arrests.

‘Someone fell over on the front line – both police and demonstrators helped him to his feet which was nice.’ 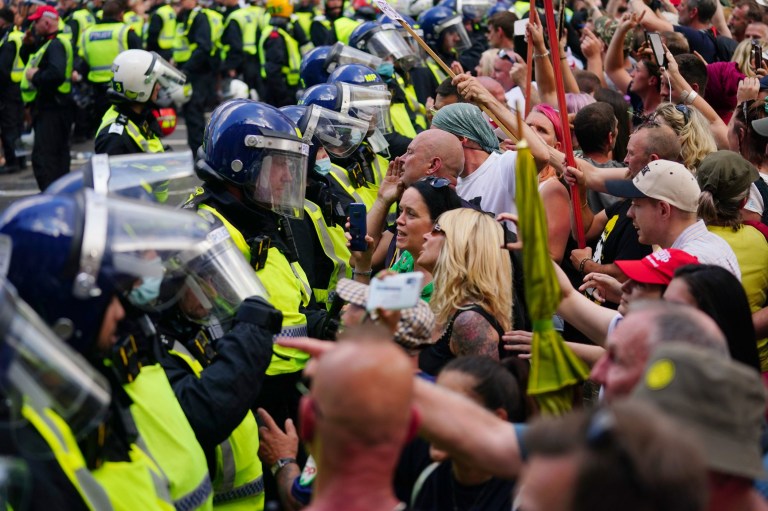 Most legal restrictions regarding coronavirus have been lifted in England from today (Picture: PA) 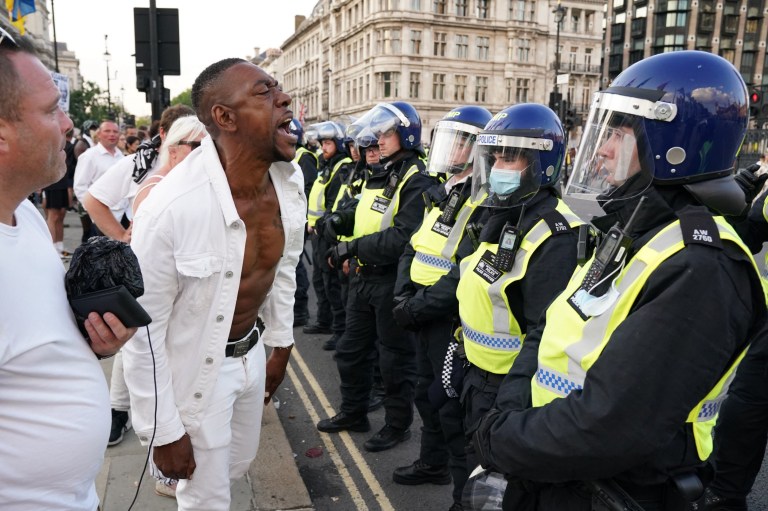 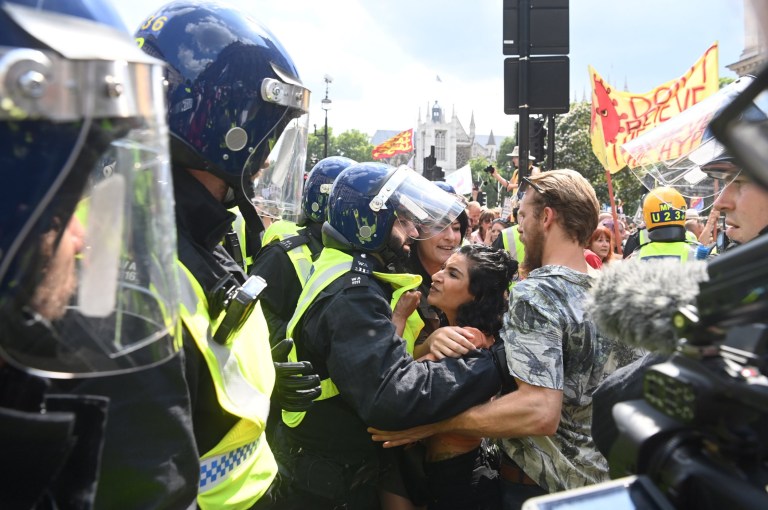 Demonstrators scuffle with police during the anti-lockdown protest (Picture: EPA) 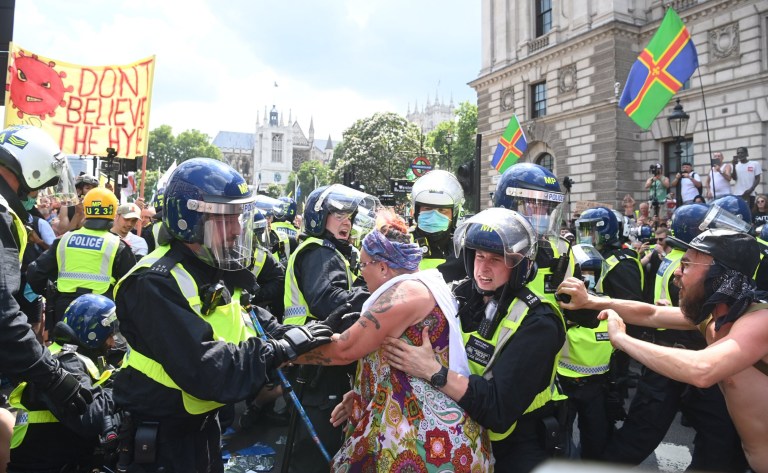 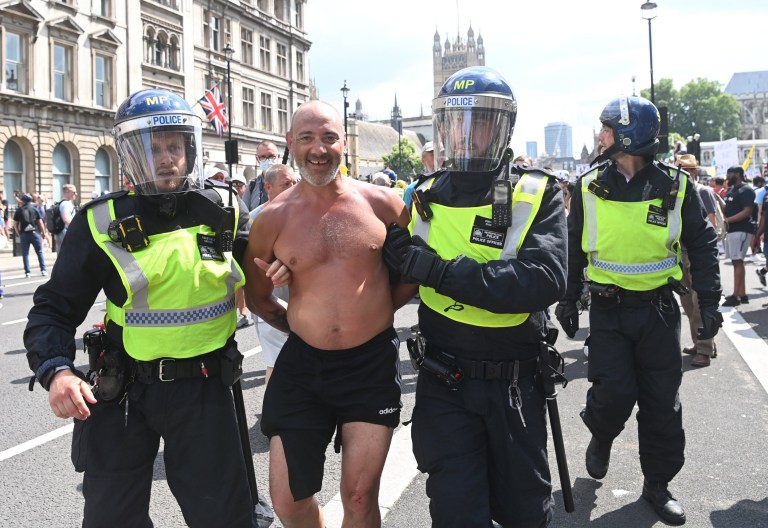 The protests came during a heatwave for much of the UK (Picture: EPA)

Another attendee, who did not wish to be named, said there had been ‘lots of abuse directed against police’ by those demonstrating.

Earlier today, an officer was seen to put a lock on a gate at the entrance to Parliament while those outside held signs with anti-vaccination and anti-police messages, with some chanting ‘shame on police’ and ‘arrest Boris Johnson’.

This afternoon, Boris Johnson announced at a press conference that vulnerable children over 12 would be able to book a Pfizer coronavirus vaccine, as well as those who lived with someone at high risk.

He also said that from September, nightclubs and some other large events would be restricted to those who have had both their coronavirus vaccinations, prompting anger from some quarters that he was seeking to introduce domestic vaccine passports, something he had previously denied.