Infections continue to soar, although hospitalisations are rising at a slower rate (Picture: Metro.co.uk)

More than 50,000 people have tested positive for Covid in the UK in the past 24 hours – the highest daily rise since January.

It comes as the Government prepares to lift practically all coronavirus restrictions in England on Monday, despite concerns from scientists across the world.

Deaths are rising at a much slower rate, as another 49 people lost their lives within 28 days of testing positive, today’s figures show.

It is in stark contrast to the second wave last winter, when daily fatalities peaked at 1,359.

Vaccines appear to have weakened the link between between catching the virus and death.

But the British Medical Association has warned there could still be ‘potentially devastating consequences’ if restrictions including mandatory mask wearing are ended next week. 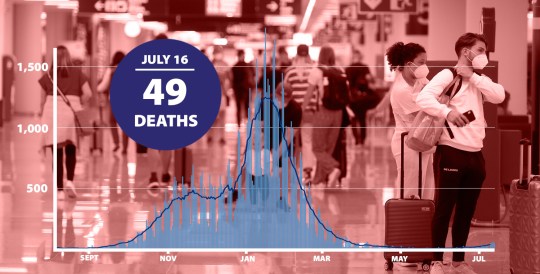 Deaths are starting to rise, but at a considerably slower rate than infections (Picture: Metro.co.uk)

He warned the UK is ‘not out of the woods yet’ and urged people to act with caution as lockdown is lifted.

Today’s figures from the Department of Health showed there were 51,870 new cases of Covid – up from 48,553 yesterday and the highest daily total since January 15.

As the Delta variant continues to run rampant, modelling shows cases could hit 100,000 per day by August.

Speaking to Sky News this morning, minister Lucy Frazer said the Government is not ruling out reintroducing social distancing measures if the situation becomes ‘unacceptable’.

But confirming earlier this week that plans for so called ‘Freedom Day’ will still go ahead next week, Health Secretary Sajid Javid asked ‘if not now, when?’

He said he ‘firmly believed’ this was the right time to ease restrictions in England and added that strict border measures and more funding for genome sequencing would help keep new variants at bay.

He said Covid-19 was not going away, but the summer and school holidays offered the best change of a return to normal.

Javid added: ‘If we wait longer, then we risk pushing the virus towards winter when it will have an advantage, or worse still, we will not be opening up at all.

‘We delayed Step 4 by four weeks so we could build our vaccine wall even higher.

‘And we believe this wall means that we can withstand a summer wave. And while the wall would be higher still if we waited until winter, we know the wave would be much more dangerous.’