Fewer people are booking first appointments, while others are having to wait several weeks for their second (Picture: Getty/PA)

Doses of lifesaving vaccines are ‘being thrown in the bin’ as demand for jabs tails off among younger groups.

Wastage is reportedly being fuelled by a drop off in first dose appointments and continuing restrictions on when the second dose can be administered.

The Joint Committee for Vaccination and Immunisation (JCVI) has recommended an interval of between eight and 12 weeks, despite the drugs being approved for use with a break as low as three weeks.

An anonymous vaccinator in the North East told The Telegraph: ‘For the last two weeks we have literally been throwing the vaccine into the bin.’

The source added that people were missing appointments because they’ve been seeking an earlier second dose elsewhere, meaning vials of vaccine due to expire have to be disposed of.

Some walk-in centres are reportedly giving the jab out after four weeks against the official advice.

But in Cambridge, ITV reported some Pfizer vaccines were being thrown away at the end of the day as people who wanted their second jab before the eight-week interval were rejected.

Vaccine ‘hesitancy’ has led to fewer turning up for first appointments, the North East source said, adding that they are ‘disheartened’ and ‘frustrated’. 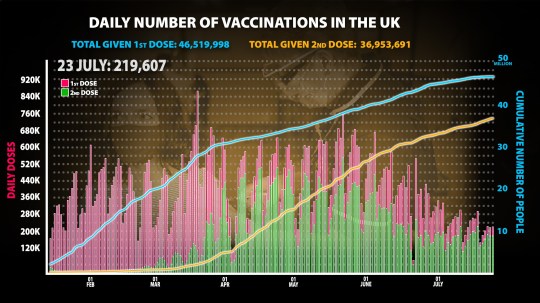 The number of vaccines being administered has dropped off in recent weeks as the rollout starts to get down to reluctant younger people (Picture: Metro)

But fewer than 60% of people aged between 18 and 30 have received a single dose of the vaccine despite appointments being available to all.

Less than 23% of younger people have had two doses, with the demographic clearly on course to have far less full protection than older groups by the end of the summer. 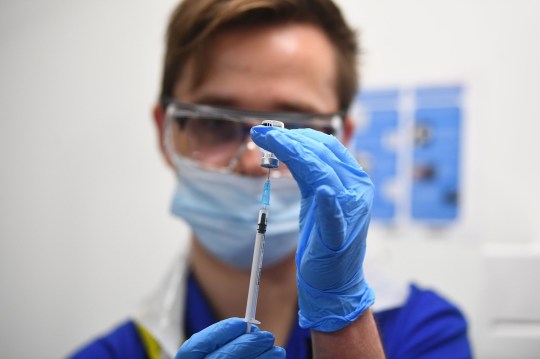 The government reportedly considered bringing the gap between doses down to four weeks but decided to leave it at eight, following an earlier drop from 12 (Picture: Getty)

Paul Hunter, professor of medicine at the University of East Anglia, told the paper that ‘giving younger people that extra immunity earlier on’ might slow the rate of infection nationally.

But the science is disputed: earlier this week, Oxford University professor Susanna Duanchie said that eight weeks between Pfizer doses – the main product being used for younger people – is the ‘sweet spot’.

The British Medical Association, the doctors’ trade union, called for a ‘flexible, pragmatic approach’ to the interval to avoid ‘throwing perfectly good vaccinations down the drain’.

An NHS spokesperson told the paper: ‘The NHS allocates vaccines in line with independent clinical advice and provides vaccines to each local area based on their population size.

‘We have been absolutely clear that jabs should go to those who need a first dose, as well as a second dose at eight weeks and only in line with clinical JCVI guidance, while avoiding any wastage.’

A Department of Health and Social Care spokesperson said: ‘No vaccines should go to waste and we have been clear that local vaccination sites should be managing their appointment lists to ensure all vaccination slots are filled and so they have a back-up list of patients and staff who can receive a jab at short notice.’