THE families of victims of the Croydon tram crash which claimed the lives of seven people have said they are “bitterly disappointed” after an inquest ruled today that the tragedy was an accident.

A further 51 people were injured when the tram derailed in South London on November 9, 2016.

Seven people died and a further 51 were injured when the tram derailed in Croydon, South London in 2016Credit: PA 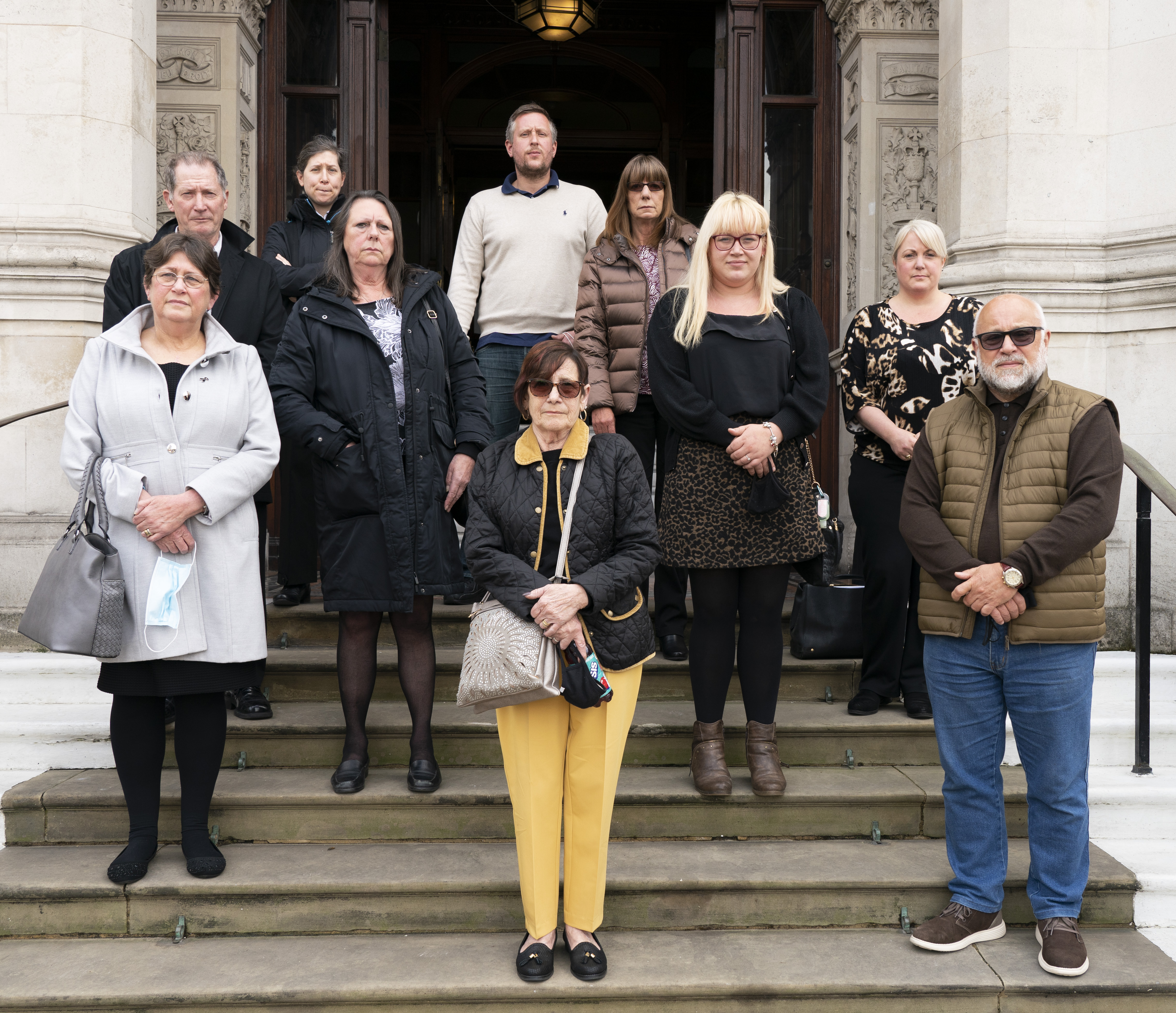 Relatives and friends of the families who died in the tram crash, stand on the steps of Croydon Town Hall during the inquest last weekCredit: Louis Wood News Group Newspapers Ltd

Dane Chinnery, 19, Philip Seary, 57, Dorota Rynkiewicz, 35, Robert Huxley, 63, and Philip Logan, all from New Addington, and Donald Collett, 62, and Mark Smith, both from Croydon, all died in the crash.

On its 10th day of deliberations at Croydon Town Hall, the 10-person jury reached a unanimous conclusion that their deaths were a result of an accident and they were not unlawfully killed.

During a seven-week inquest, jurors heard that the tram toppled over and spun off the tracks after near the Sandilands stop after hitting a curve at 45mph, despite a 12mph speed restriction being in place.

All of the fatalities had been either fully or partially thrown out of the tram through the windows or doors when the glass shattered.

‘JUSTICE HAS NOT BEEN DONE’

Today, the mother of one of the victims said she was disappointed the inquest did not hear from TfL or the driver of the tram that crashed.

Jean Smith, 64, mother of Mark Smith, said: “I am bitterly disappointed as justice has not been done today.

“It has been a total farce as we have only heard half of the evidence and no-one who could potentially have been responsible for the crash has been called as a witness.

“It’s morally wrong that we haven’t been able to hear from anybody from TfL, TOL or the driver during the proceedings, whatever legal precedent says.

“It feels like they have been able to hide from giving evidence and it simply isn’t fair or just. Justice has been suffocated because of the coroner’s ruling.”

Danielle Wynne, the granddaughter of another crash victim Philip Logan, said: “I’m so upset and angry. It’s not an accident. Someone is to blame.

“We want lessons to be learned so that no other family has to go through this.”

Alfred Dorris, the driver of the tram, was arrested but never charged after the incident.

The foreman of the jury at the inquest into the Croydon tram crash said: “The tram driver became disorientated, which caused loss of awareness in his surroundings, probably due to a lack of sleep.

“As a result of which, the driver failed to brake in time and drove his tram towards a tight curve at excessive speed.

“The tram left the rails and overturned onto its right side, as a result of which the deceased was ejected from the tram and killed.”

Simon French, chief inspector of the Rail Accident Investigation Branch, previously told the inquest that Mr Dorris may have slipped into a period of “microsleep” on the stretch of track ahead of the curve.

He said extra signage could have mitigated the risk, and there were apparent “culture issues” at operator Tram Operations Ltd that meant drivers were unwilling to admit to speeding or other errors.

Mr Posford, head of catastrophic injury at Osbornes Law, said: “The families of those who died are understandably angry and upset at today’s conclusion, and that they have been unable to hear from those responsible for the systemic failings that led to their loved one’s deaths.

“They have had an agonising wait for justice but have been let down by the process that has allowed the managers of TfL (Transport for London) and TOL (operator Tram Operations Ltd) to dodge giving evidence and avoid giving the families the answers they so desperately need.

“Instead of gaining a greater understanding of how and why their loved ones died, they have been badly let down.

“Ultimately they feel that nobody has been held accountable for the tragic events almost five years ago and will keep fighting for justice for their loved ones.”