Andrew Allen had previously only caught a glimpse of little Oliver in a photograph (Picture: Andrew Allen/SWNS)

This is the heartwarming moment a dad finally got to meet his son for the first time – five weeks after falling into a coma with coronavirus on the day he was born.

Andrew Allen, 32, had previously only caught a glimpse of little Oliver in a photograph a nurse had left for him by his bedside. But he had to wait weeks for the chance to meet the infant in person.

He said: ‘I was on a high dependency ward, and I was moving down a ward because I was obviously getting better – and the consultant arranged for me to see them on the corridor. That was the first time I’d met Oliver.’

The factory worker, who’d only just had his first jab, developed symptoms after a colleague at the aerospace engineering firm where he worked tested positive for Covid-19.

Over the next ten days, Andrew lost his sense of smell, and suffered from vomiting and diarrhoea, but thought he might only have a bug when a PCR test came back negative. 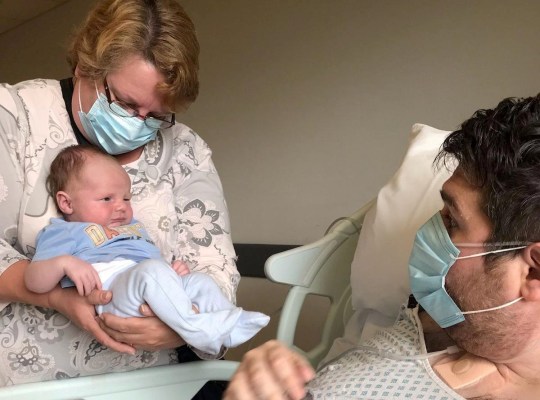 Andrew first met his son in a corridor while being transferred between wards (Picture: Andrew Allen / SWNS)

However, he started to doubt the result as his symptoms began to closely those of the Covid-19 Delta variant.

He said: ‘I lost my smell and taste after having the negative, a day later, so I was thinking in my head: “It’s got to be covid, this. I don’t know how it could be anything else?”‘

On July 27, Andrew’s wife Charlotte went into hospital to prepare to have her baby.

By that point, Andrew already knew he would not be able to be present for the birth of his son. 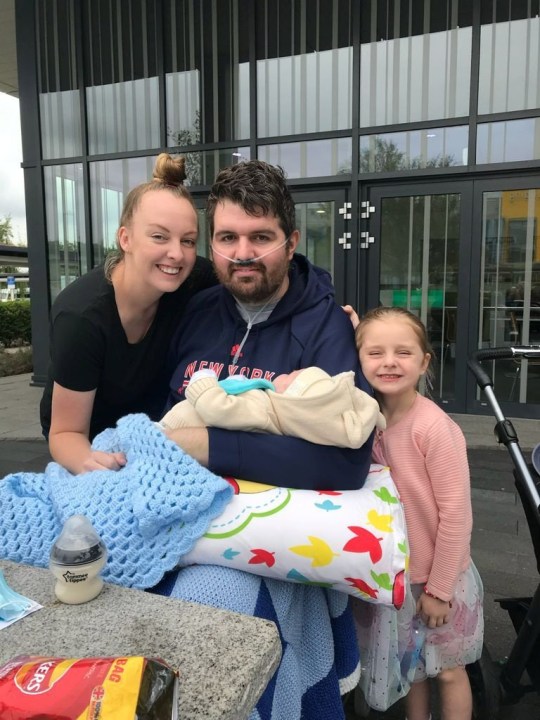 He said: ‘I vaguely remember saying “bye” to Charlotte as she left to go to the hospital, and I remember being quite upset that I wasn’t going with her.

‘But I was so poorly that I sort of just fell asleep again – and I wasn’t really aware of what was going on.’

Charlotte gave birth to Oliver at 5.25am the following day.

Within hours of what should have been one of the happiest moment of their lives, Andrew was rushed to hospital after relatives became worried about his laboured breathing, which they likened to a ‘death rattle’, and put in a coma.

Andrew said: ‘My oxygen stats were at 35, which apparently is very, very low – and one of the worst cases they’ve ever seen.

‘I remember trying to tell the paramedics that my son had been born. But I kept getting told off for taking my oxygen mask off.’ 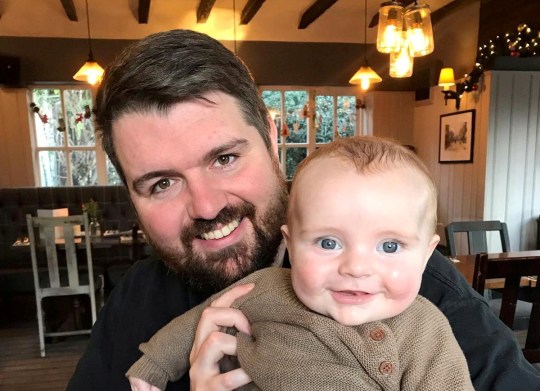 Andrew said the moment he got finally got to meet Oliver was ‘overwhelming’ (Picture: Andrew Allen / SWNS)

When he woke up two weeks later, on August 11, he caught sight of a picture of his daughter, Imogen, 5, and baby – his first glimpse of his newborn child.

Andrew said he was ‘gutted’ to miss the special day after he came very ‘close to dying’.

He added: ‘There was a picture that the nurses had put up for me – and it was my little girl, and she was holding a baby.

‘At the time, I just remember thinking: “That must be the baby”.

‘I knew I would miss the birth when I got Covid, and I was gutted. I was in and out of consciousness, so I wasn’t aware when he was born.

‘But I was disappointed when I found out afterwards that I had missed it.’

For the next three weeks, frustrated Andrew was kept under observation, separated from his family, as he slowly recovered.

He said the moment he finally got to meet Oliver was ‘overwhelming’.

‘It was overwhelming – not just the fact that I’d seen my son for the first time, but I’d not seen my daughter at that point for about three and a half weeks as well,’ he said.

Since catching Covid Andrew is continuing to recover, and has returned to full-time work but said he is ‘still nowhere near 100%’.