DEBENHAMS shoppers swooped to stores this morning to get their hands on items in the clearance sale as the retailer braces for liquidation.

The chain’s 124 stores are set to close – but shoppers rushed to make the most of the 70% off sales as England’s non-essential shops reopened this morning. 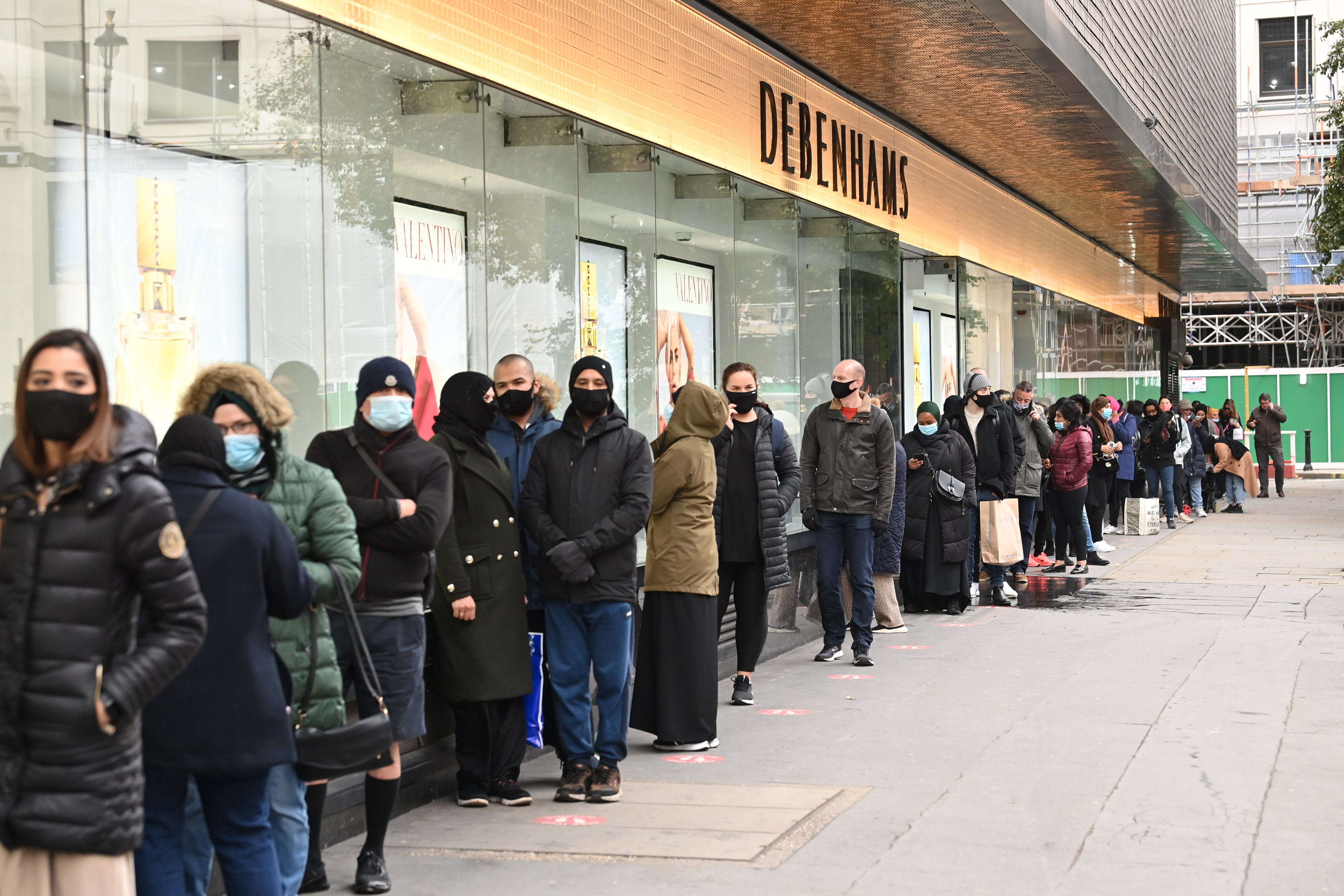 Londoners swooped to Debenhams this morning to get their hands on the dealsCredit: London News Pictures 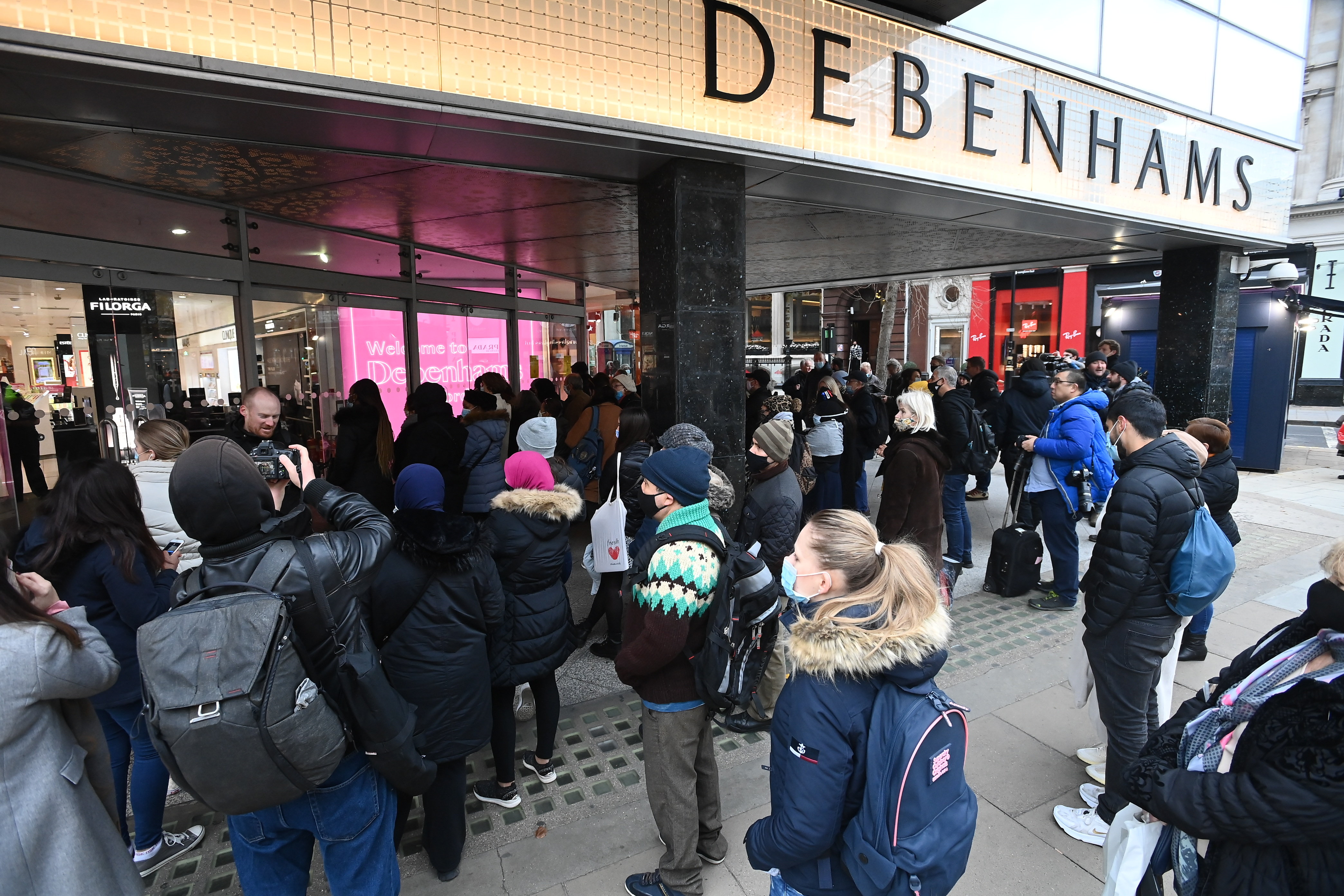 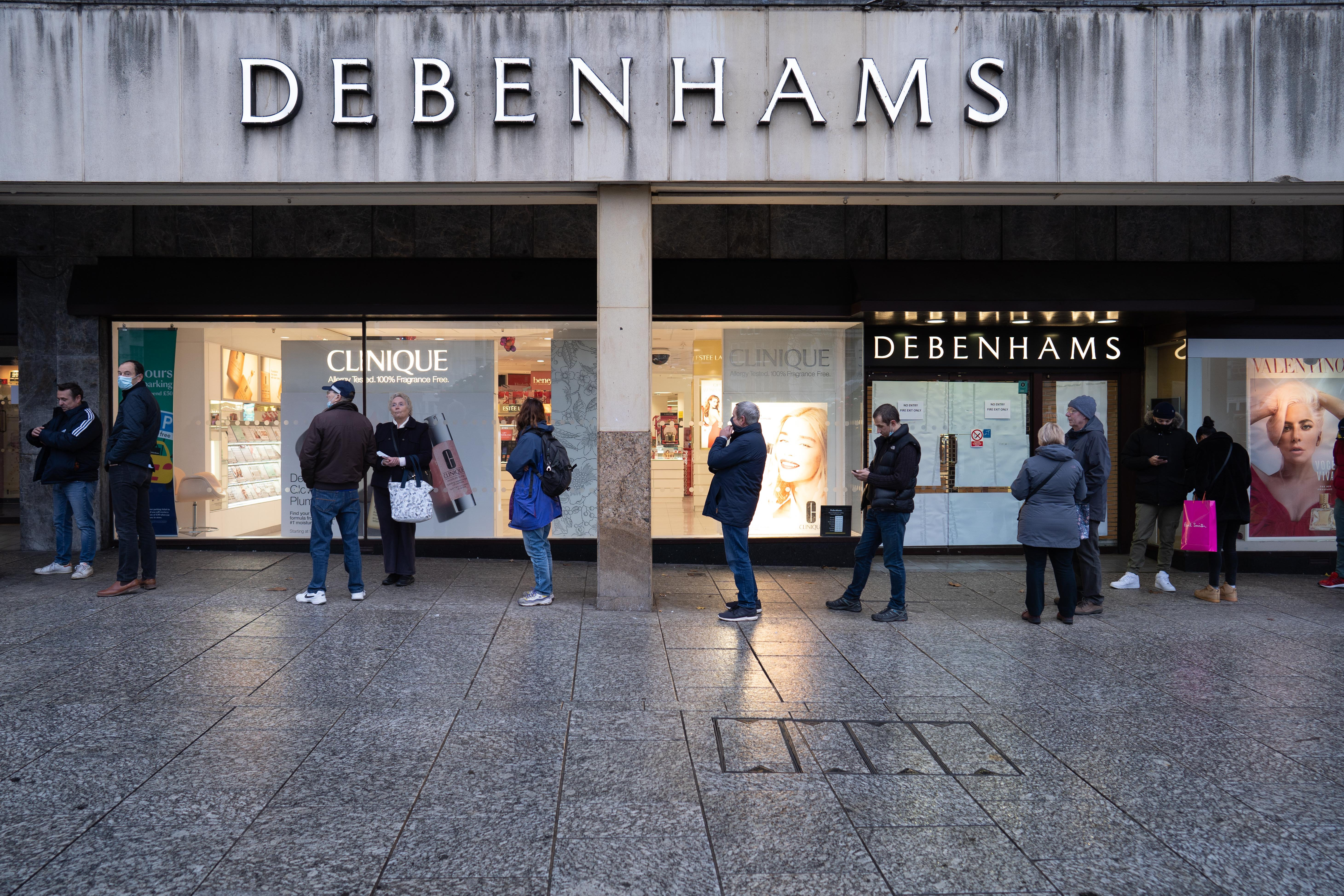 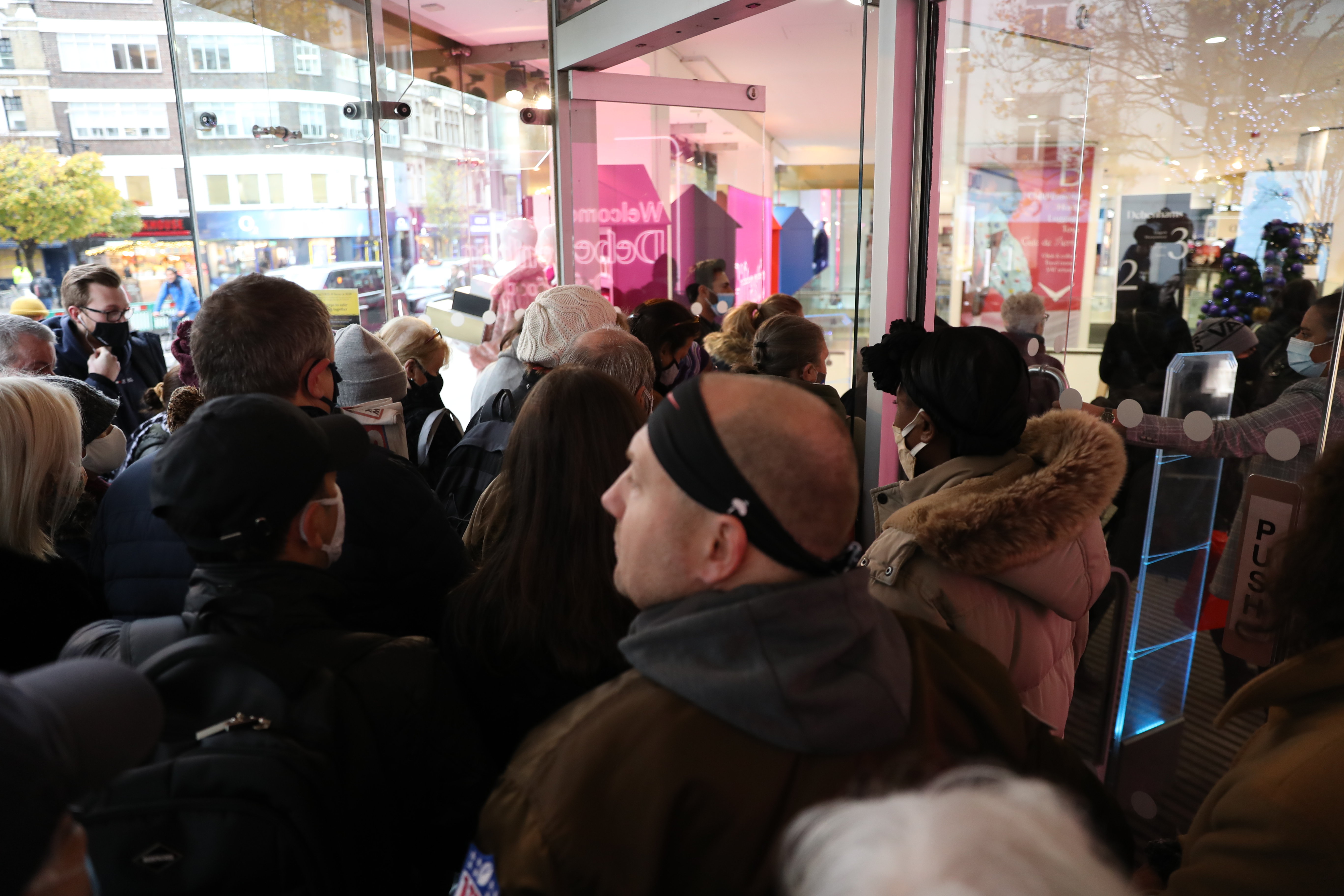 Brits piled into the store in London this morningCredit: �2020 Stephen Lock / i-Images 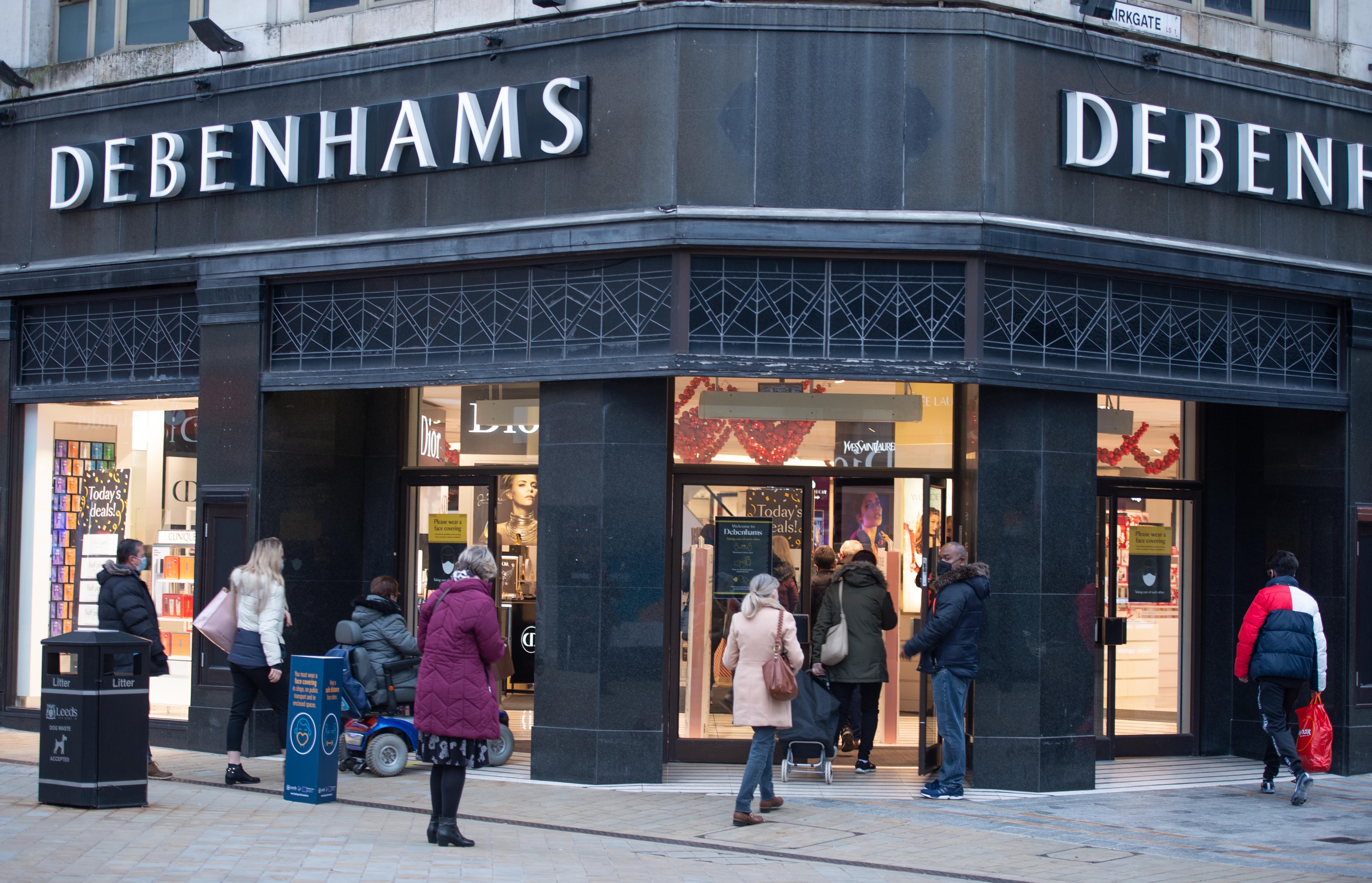 Just a handful of shoppers entering Debenhams in Leeds as the doors open for the first time after lockdownCredit: IMAGENORTH 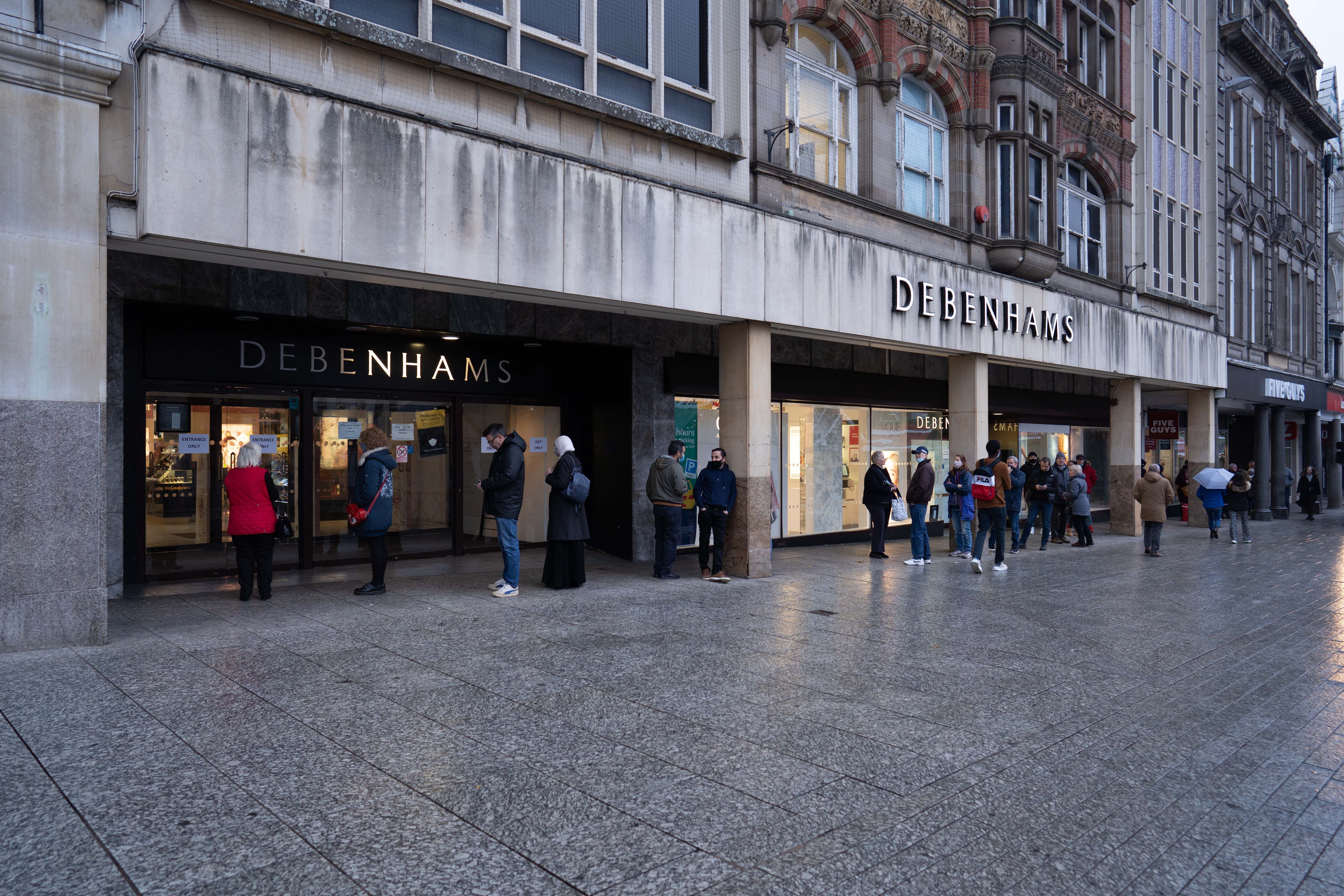 In Nottingham, shoppers queued up to get a glimpse at the clearance sales Credit: SWNS:South West News Service 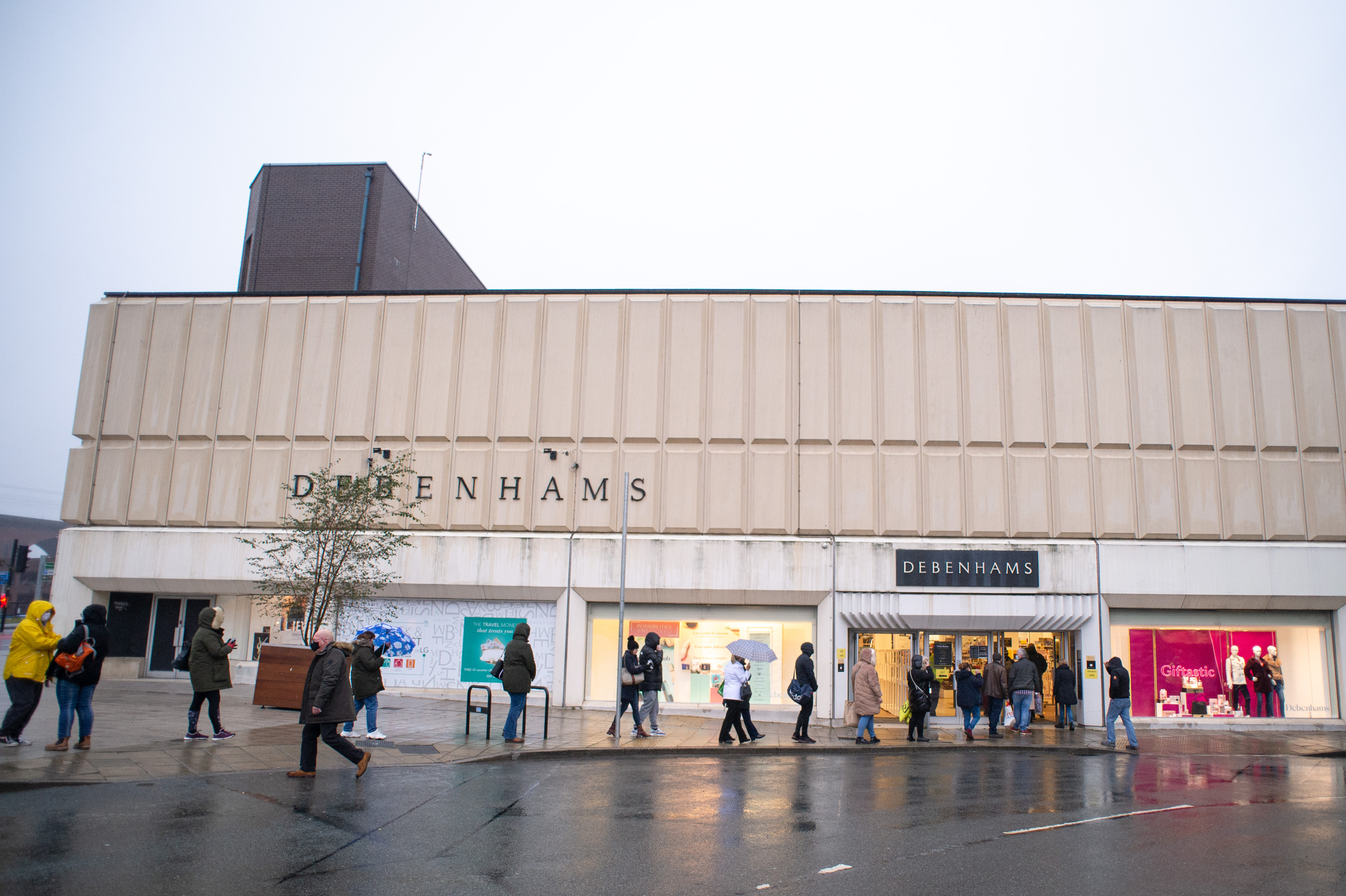 Long queues of shoppers were seen outside Debenhams in Stockport this morningCredit: Cavendish Press

Hundreds of shoppers piled into Debenhams on Oxford Street, London, this morning to make the most of the retailer’s clearance sale.

Queues looped around the block before staff threw open the doors at 10am on the first day after national lockdown.

Hairdresser Anthony Murtagh, 36, cycled into central London and was hoping to pick up some aftershave for Christmas.

He told The Sun: “It’s nice to get out after lockdown – it was getting boring even though I was keeping myself busy.

“I’m hoping there’s some reductions so I can get a deal.

“I want aftershave and some makeup – but I’m keeping my eye out for sales.

“I feel like a bit of a vulture picking at Debenhams in light of the news.”

And similar scenes were seen across the country, as people filed into the stores to grab 70% off deals.

In Nottingham, keen shoppers lined the streets waiting for the retailer to open its doors.

And in Stockport, people braved the miserable December weather to get in with a chance of bagging Debenhams’ sale stock.

The 242-year-old retailer is to be liquidated following failed rescue talks to save the chain’s 124 shops, prompting the sale bonanza.

Hundreds of thousands of shoppers flocked to the store’s website last night to get their hands on closing-down deals.

But some weren’t lucky enough to make it on to the online store.

Youth worker, Jada Ervin, 20, said she was hoping to get her Christmas presents in store today. 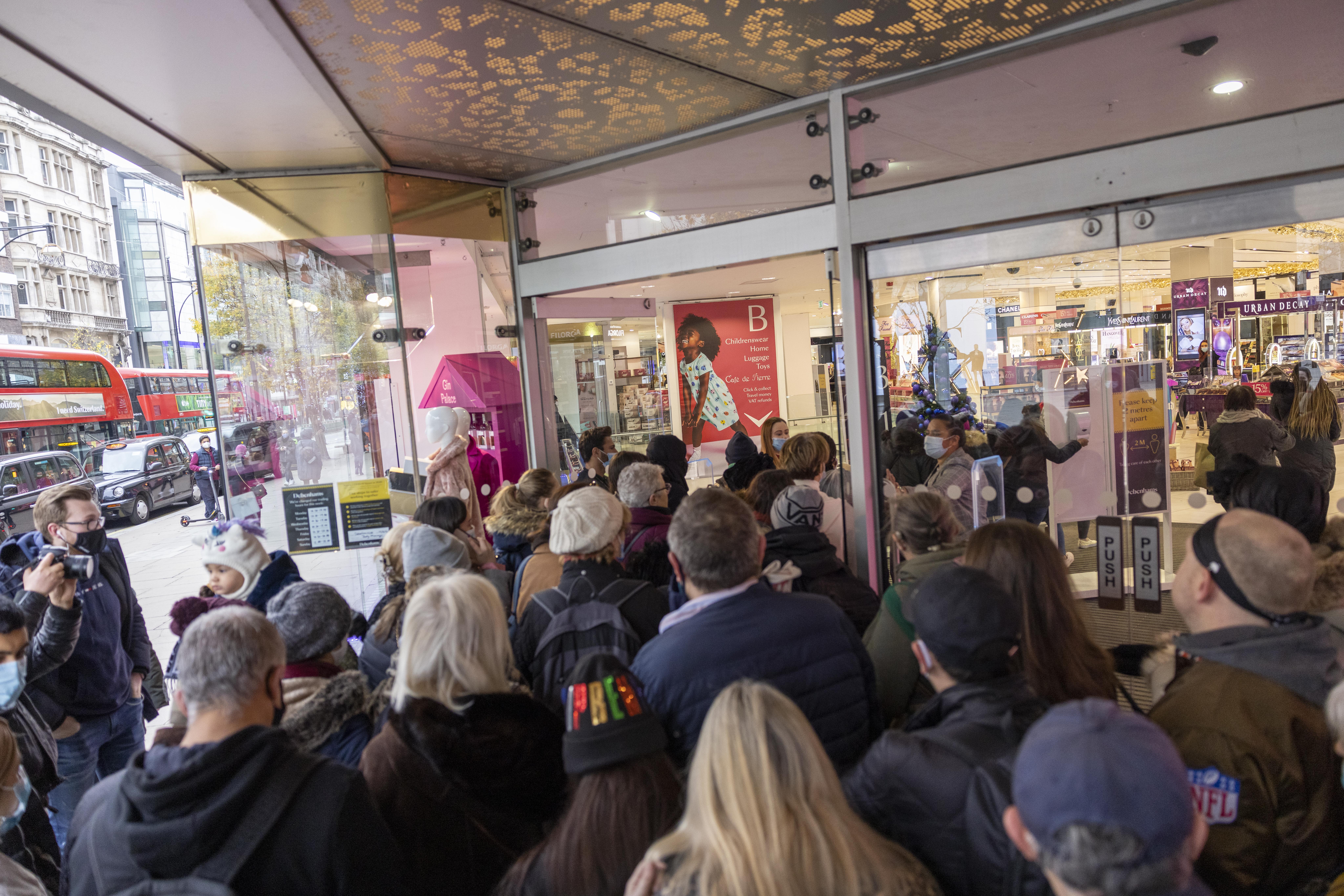 Queues looped around the block before staff threw open the doors at 10am this morningCredit: Doug Seeburg – The Sun 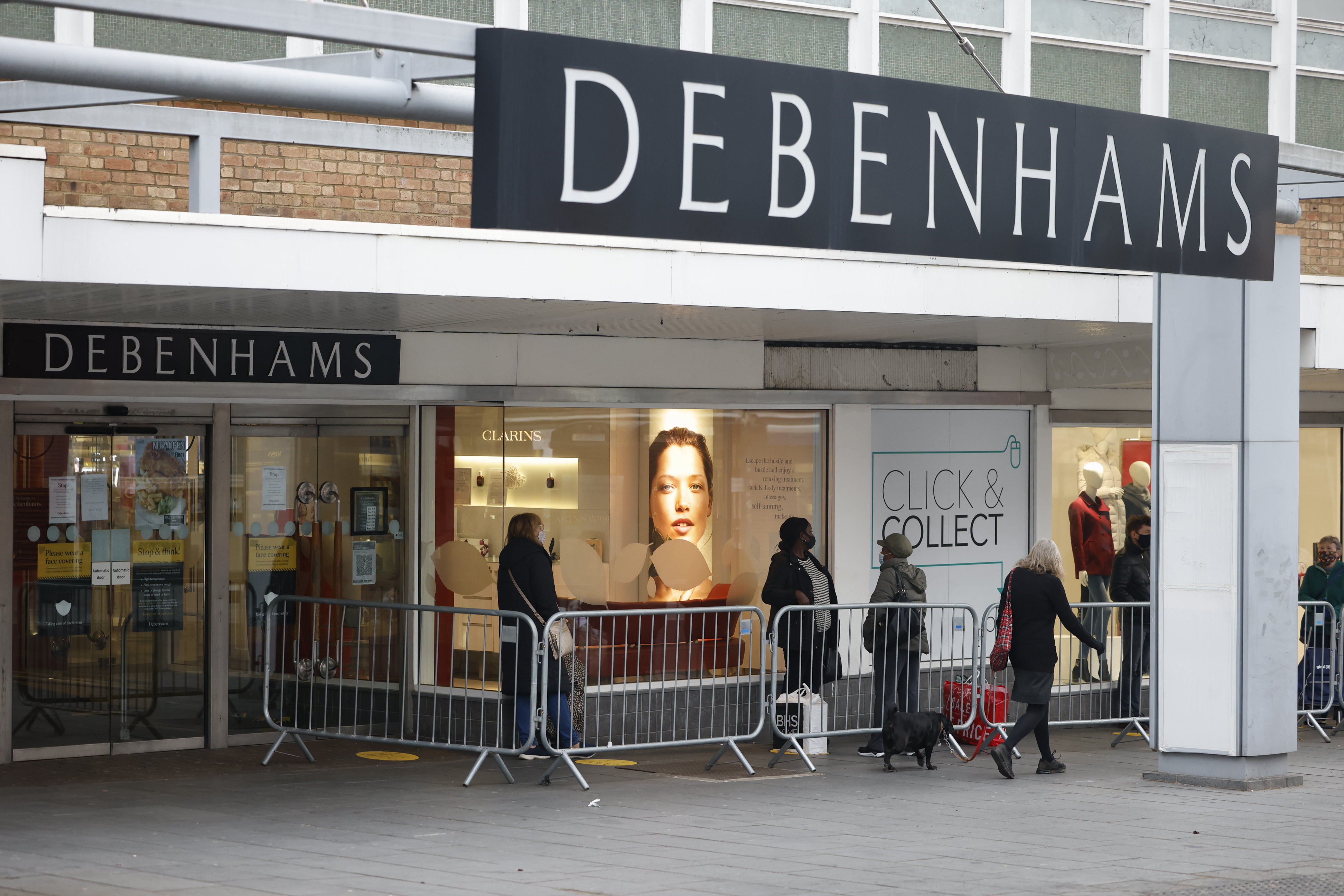 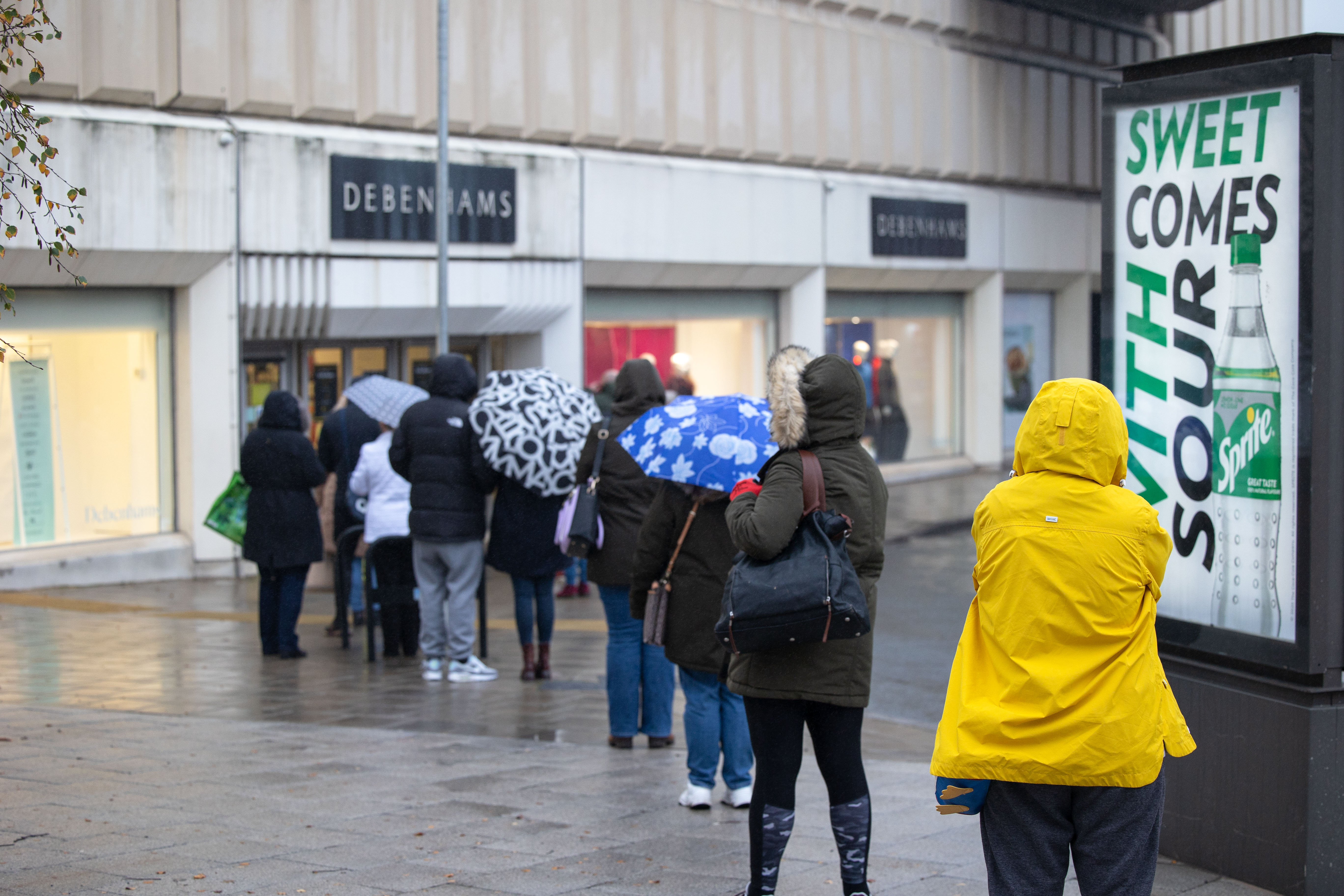 Shoppers queued outside in the wet weather to get their hands on the sale itemsCredit: Cavendish Press 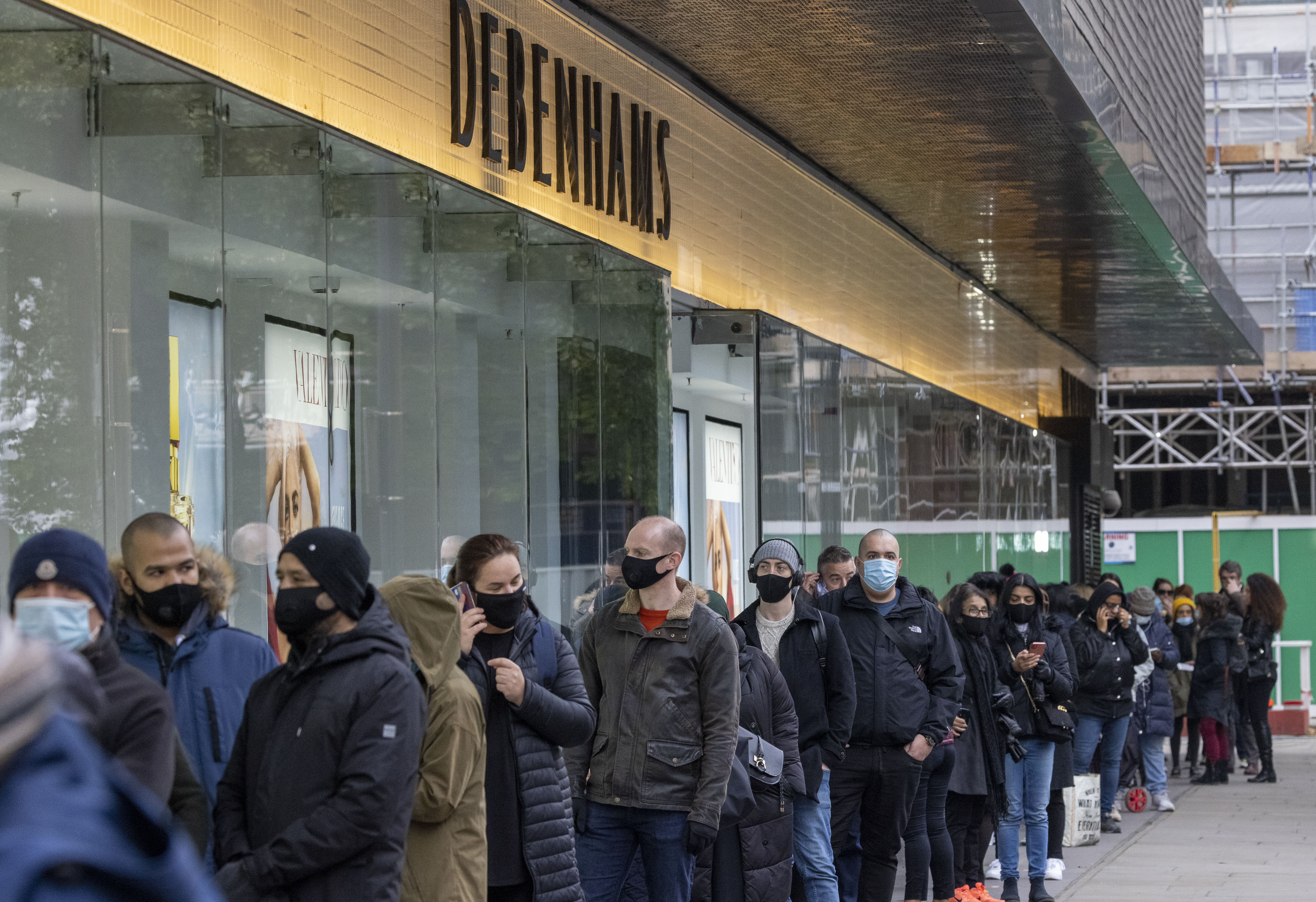 Hundreds of keen shoppers flocked to Debenhams in London this morning Credit: Doug Seeburg – The Sun

She told The Sun: “I couldn’t get on the website last night so hopped on the bus this morning.

“I always leave my Christmas shopping to the last minute so hopefully it’s paid off and I’ll get a bargain.”

On Tuesday night there was a 20-minute wait time to access the site “due to exceptional demand” as more than 300,000 people tried to log on at once.

Debenhams is set to be liquidated after JDSports pulled out of bids to save the troubled department store chain.

The collapse comes after Debenhams’ sales in the six months to October plunged to £323million versus billions in its heyday.

Yesterday was one of the toughest days in history for British retail as Debenhams and the Arcadia group were forced to admit defeat.

The group said 9,294 employees are currently on furlough.

Rishi Sunak promised he “stands ready” to help the 25,000 Debenhams and Arcadia workers through the “deeply worrying” times.

He added: ‘There are negotiations between various parties and the companies at the moment – particularly with regard to pensions – and it wouldn’t be right for me to comment specifically on those.”

Shops across the country were swarmed this morning as Brits jumped at the first taste of normal life.

Shoppers queued from 5am to get into Primark, marking the end to the second national lockdown.

And after being closed for four weeks, some gyms opened at MIDNIGHT as fitness fanatics piled in during the early hours of the morning.

The excitement of lockdown ending was coupled with even more good news this morning.

The UK is the first country in the world to give a Covid vaccine the green light – with mass vaccination planned from next week.

The jab – which is 95 per cent effective and developed by pharmaceutical giant Pfizer and German firm BioNTech – is safe for use, health regulators say. 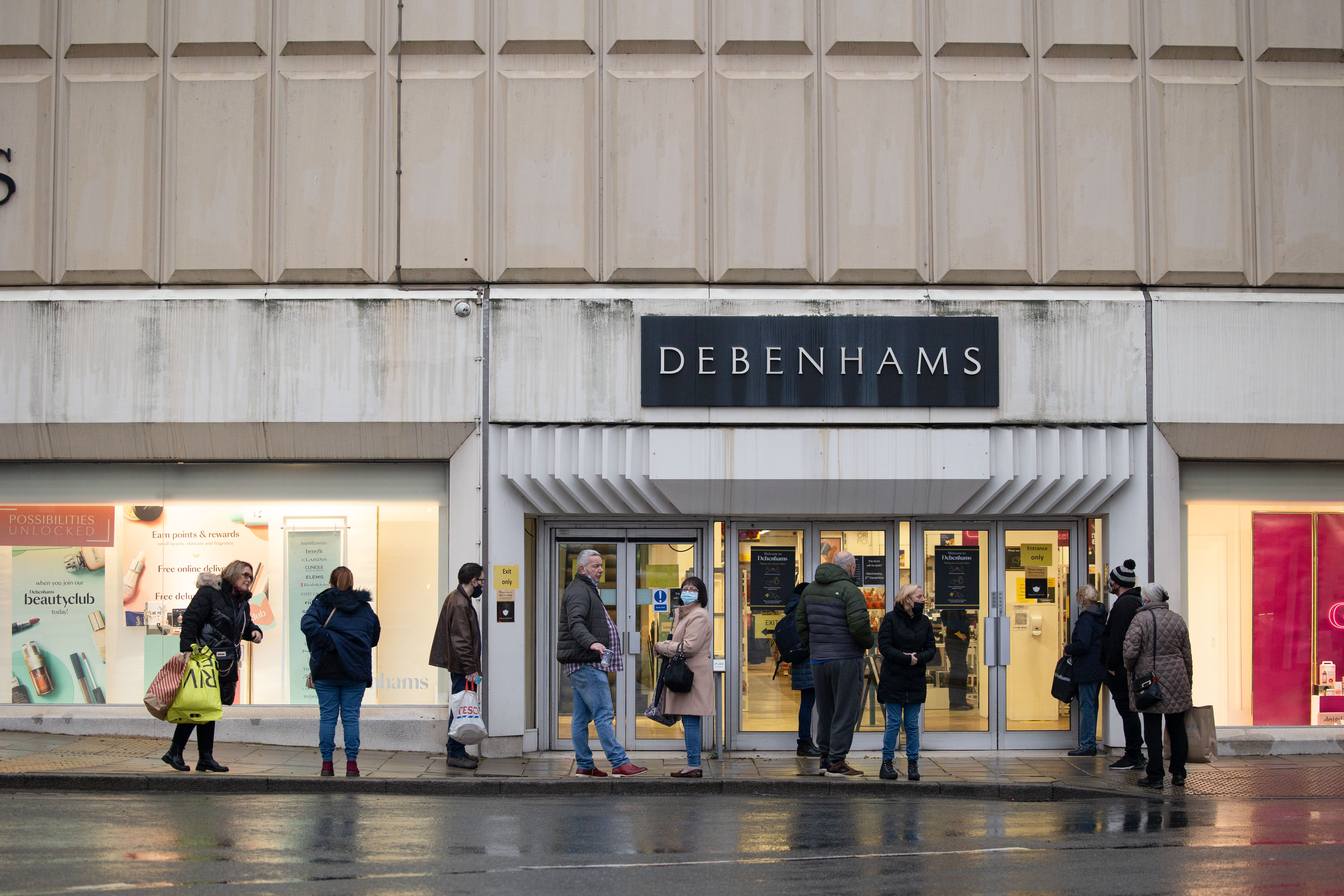 The 242-year-old retailer is to be liquidatedCredit: Cavendish Press 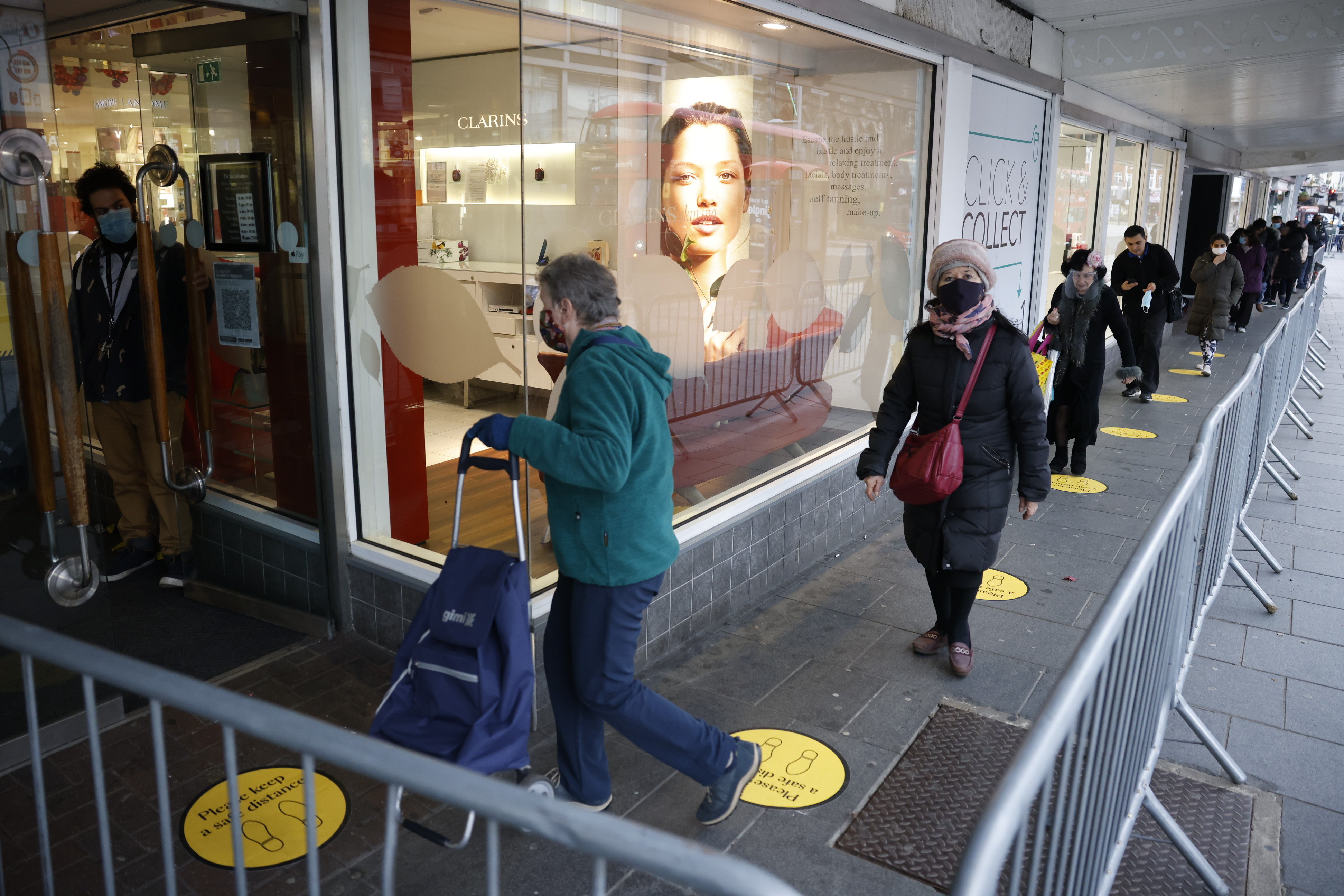 Shoppers entered Debenhams as it opened at 9am in Harrow, north LondonCredit: London News Pictures