Detainees ‘denied medication’ ahead of Jamaica deportation next week

A demonstration outside the Jamaican High Commission in South Kensington to add pressure on the Home Office over their planned charter flight (Pictures: Gergana Krasteva / Metro.co.uk)

Campaigners and MPs are demanding a deportation flight filled with people who are ‘thoroughly British’ and have ‘extensive family’ in the UK to be halted.

Last week, Metro.co.uk reported that Home Secretary Priti Patel is preparing a another attempt to deport people to Jamaica on a charter plane scheduled to take off on November 10.

This will be the fourth mass deportation to the Caribbean since the Windrush scandal broke in 2018.

Since then, the Home Office has made a point that the charter flights to Jamaica have held only foreign national offenders.

However, there were at least three people headed for deportation, who have no criminal convictions, indicating a shift in the Government’s position.

The Home Office has defended these flights saying that they remove people convicted of ‘serious crimes’ and ‘those with no right to remain’.

They added: ‘Extensive checks have taken place to ensure no one being removed is a British citizen or eligible for the Windrush scheme.’ 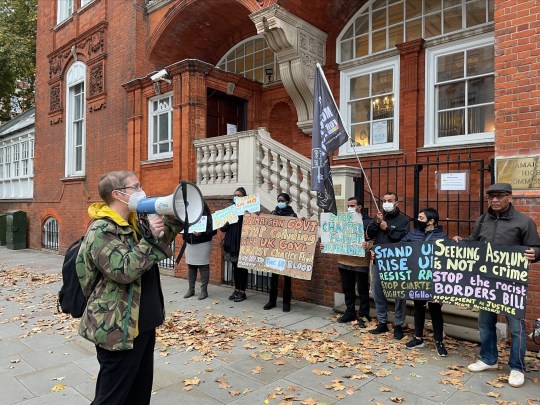 However, campaigners claim there are people on the flight who do not have criminal convictions.

A 20-year-old woman who has lived in the UK since she was 13 and has no family in Jamaica was also due on the flight with her mother.

This was despite both having no convictions – but they have since been removed following a protest yesterday, according to campaigners.

Movement for Justice held a demonstration outside the Jamaican High Commission in South Kensington, piling pressure on the Home Office over their planned charter flight.

It was attended by two desperate mothers purported to be fighting for their sons to stay in the UK.

The mum of one of the detainees, who arrived in the UK when he was 11, claimed he was ‘abused’ by British nationals as a child and ‘forced to do things that he was not meant to’.

She said: ‘We need justice for our children. My son does not have anybody in Jamaica – our family is in America and in Canada – he does not know anything about Jamaica.

‘Where is he going to live in Jamaica? On the street? We need to fight for our kids.

‘My son was used and abused by the system. They saw a child coming from Jamaica and thought they could use him and do all types of stuff to him. He was brainwashed.’ 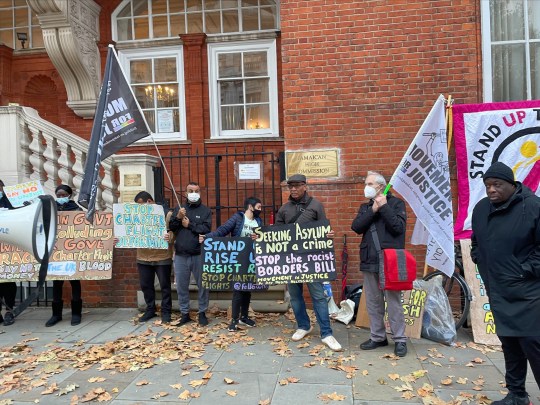 Detainees are being held in Yarl’s Wood, Colnbrook, Harmondsworth and Brook House centres.

Movement for Justice claimed that at least four of them have a history of prolonged sexual and physical abuse as children in Jamaica.

In addition, they claim that four people have also been identified as potential victims of trafficking and were allegedly groomed into criminal activity from childhood.

Since they were alerted about the deportation flight last week, campaigners have spoken to 17 people, 10 of whom they say arrived in the UK aged 16 or younger.

One of them was just a three-month-old baby when they came to the country, activists say.

Karen Doyle, national organiser at Movement for Justice, told Metro.co.uk: ‘This is the first time since the Windrush scandal that the Government has put people on these charter flights who have zero criminal convictions. 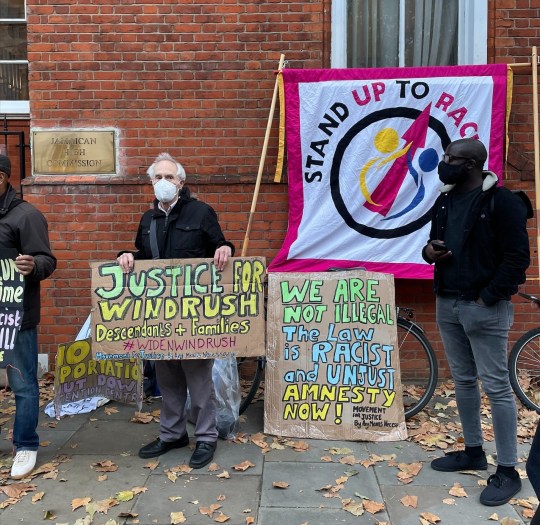 The demonstration was attended by two desperate mothers fighting for their sons to stay in the UK (Picture: Gergana Krasteva) 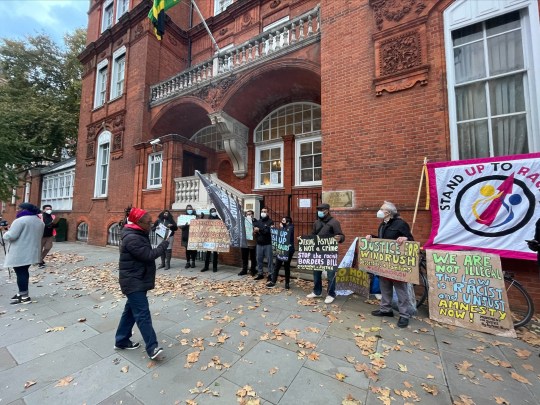 Since they were alerted about the deportation flight last week, campaigners have spoken to 17 people held in camps (Picture: Gergana Krasteva)

‘None of them have committed a crime, yet they are being put on a flight that the Government has sold as being about protecting the public from dangerous criminals – rapists and murderers – and invoking the worst stereotypes against the Jamaican community.

‘The fact that they are doing that is part of their political drive towards the Borders Bill, it is part of this ramping up of the racist and hostile environment in this country to get this bill passed that will see concentration camps being set up in other countries for refugees.

‘This is the significance of this upcoming charter flight and why we have really got to fight against it.

‘It signifies everything bad that this Government is doing to black and Asian immigrant communities in an effort to divert attention from looming economic and climate catastrophes.’

Relieved that the Government have pulled my vulnerable constituents off next weekâs mass deportation flight.

The fact they were ever on there shows that the Home Office still operates under the same âdeport first, ask questions laterâ mentality that led to the Windrush Scandal.

Hours after the demonstration in South Kensington, Movement for Justice revealed that the mother and daughter have been removed from the list for the charter flight.

Many of the detainees, they claim, are parents of British children and at least 24 youngsters are at risk of losing their fathers as a result of the Home Office’s plans.

Three deportees are also said to have a direct Windrush connection through their grandparent or a close elderly relative.

In a statement, Movement for Justice said: ‘This is a flight full of people who are culturally thoroughly British, people with Windrush connections, people with extensive family and children here in the UK.’

The Home Office said it does not comment on individual cases, but a spokesperson said it makes ‘no apology for seeking to remove those with no right to remain in the UK and dangerous foreign criminals’.

They added: ‘Those with no right to be in the UK and foreign national offenders should be in no doubt that we will do whatever is necessary to remove them.

‘This is what the public rightly expects and why we regularly operate flights to different countries.

‘Extensive checks have taken place to ensure no one being removed is a British citizen or eligible for the Windrush scheme. People are only removed to their country of origin when it is deemed safe to do so.’