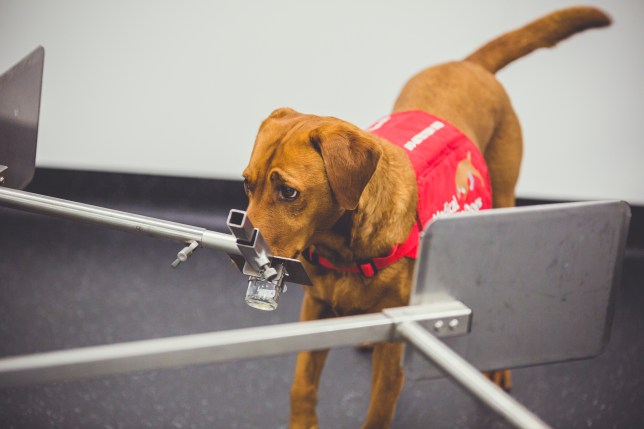 Florian, one of the trained dogs, takes part in an experiment to detect prostate cancer (MDD/Neil Pollock)

In the ongoing fight against cancer, any kind of early warning can be crucial when it comes to saving lives.

A multinational effort is now underway to develop an accurate, non-invasive tool for picking up on prostate cancer. Which is the most common form of cancer for men in the UK and can develop slowly, with no signs, over many years.

And the key to it all may lie in the nose of specially-trained dogs from UK charity Medical Detection Dogs (MDD), based in Milton Keynes.

MDD trained a four-year-old Labrador and a seven-year-old Vizsla to detect the odour of prostate cancer in urine samples collected from patients with the disease. This included Gleason 9 prostate cancer – the most lethal tumors that would benefit the most from early detection.

The charity joined forces with two scientific powerhouses: the Massachusetts Institute of Technology (MIT) and Johns Hopkins University, as well as the Prostate Cancer Foundation to explore the uses of the dogs’ unique abilities.

In a new paper, published today in the journal PLOS ONE, the researchers explain how they were able to confirm the accuracy of the canine sniffers. 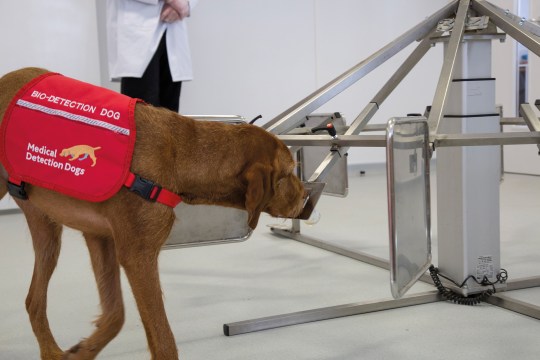 They measured the dogs’ assessment alongside artificial intelligence (AI)-assisted chemical analysis of the volatile organic compounds (VOCs) in the urine samples of men who underwent biopsy for suspected prostate cancer.

They also performed a microbial analysis on those same urine samples and the results speak for themselves.

Results showed the dogs’ olfaction system (the special sense through which smells are perceived) was 71 percent sensitive – the rate at which the dogs correctly identified positive samples.

They were 70-76% specific when it came to the rate at which the dogs correctly ignored negative samples including those with other diseases – when detecting Gleason 9 prostate cancer from blinded samples.

Think of it like sniffer dogs hunting for explosives, but instead of picking up on the chemical traces from landmines in the ground, they pick up on chemical traces of the disease within the urine sample.

While that alone is impressive, it belies the intricacy of what’s going on in the dogs’ brains.

‘What we’ve learned is that it’s not just the components in the urine that the dogs are picking up, it’s their interpretation,’ said Dr. Alan Makepeace, an oncologist and trustee of the MDD charity.

‘That’s what the artificial intelligence is trying to emulate,’ he told Metro.co.uk, explaining that the dogs are able to understand the smells and place them in context alongside environmental factors and other stimulants.

This allows them to chose the correct urine containing the disease and avoid others that may have other diseases but not the one’s they’re looking for.

The results compare favorably to the most commonly used prostate cancer test – the PSA blood test – and demonstrate how a new screening tool based on the dog’s sense of smell could support the PSA test and improve early diagnosis, leading to better health outcomes and saving lives.

If an artificial intelligence can replicate the calculations and place it inside a tool, the repercussions for clinicians could be huge. 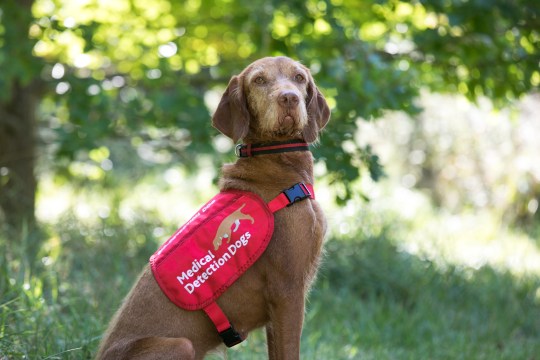 Midas, a seven-year-old Vizsla, was one of the dogs that took part in the study (Credits: Megan Williams)

Both the researchers and the dogs were double-blinded for the study, which is the first truly controlled one of its kind.

‘One of the main points of this work is that the dogs aren’t just detecting prostate cancer, they are detecting the most lethal prostate cancers – those that would benefit the most from early detection,’ commented Jonathan W. Simons, MD, PCF president and CEO, and co-author of the study.

‘With compelling evidence of this approach, we are planning larger-scale studies using canine olfaction, urinary VOCs and urinary microbiota profiling to develop a machine olfaction diagnostic tool, a ‘robotic nose’ if you will, that may ultimately take the form of a smartphone app of the future.’

Dr. Andreas Mershin, physicist and research scientist, from the Center for Bits and Atoms at MIT and a co-author on the study added: ‘Imagine a day when smartphones can send an alert for potentially being at risk for highly aggressive prostate cancer, years before a doctor notices a rise in PSA levels.

‘The incredible work of these dogs is critical as we advance this program to develop an improved method of early prostate cancer diagnosis.

‘Equally important is that men can be citizen scientists and contribute to the bio bank that will help us eventually solve this problem that is urgently needed. Once we have built the machine nose for prostate cancer, it will be completely scalable to other diseases.’ 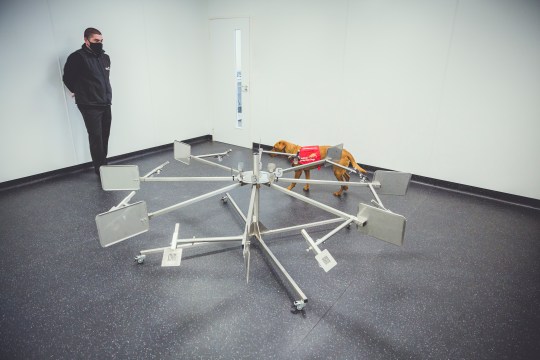 Dr. Claire Guest, co-founder and Chief Scientific Officer of Medical Detection Dogs and the lead author on the study, said, ‘This study showed that a dog’s nose could hold the key to an urgently needed, more accurate, and non-invasive method of early prostate cancer diagnosis.

‘Specialist-trained cancer detection dogs, Florin and Midas, detected extremely aggressive prostate cancers quickly and accurately from urine samples, even discriminating these against urine from patients that had other diseases of the prostate.

‘This additional information could support the PSA and would provide earlier, non-invasive, sensitive detection of clinically aggressive prostate cancers that would most benefit from early diagnosis, simply from a urine sample.

‘This has enormous potential and in time the ability of the dogs’ nose could be translated to an electronic device.’