Scientists are trying to figure out why Covid-19 infections have unexpectedly tailed off (Picture: Getty)

A leading scientist advising the government on its Covid-19 strategy has put an unexpected drop in Covid-19 cases down to schools closing.

Pandemics expert Dr Mike Tildesley warned ‘it’s possible that cases may seem to go down, when infections may be not going down as fast’ due to a drop off in testing of pupils.

Modeling used by ministers to set policy indicated cases would reach 100,000 a day this summer, with one expert forecasting cases could be double that.

But confirmed infections have fallen five days in a row for the first time since early February.

Scientific opinion is divided on what is fuelling the fall and whether it represents a sustained shift in the pattern of the pandemic or a blip before a return to growth.

Cases hit 54,674 on July 17 but by Sunday had fallen to just 29,173, although reported infections are routinely lower at weekends.

Scientists have put forward various theories for the drop, including good weather encouraging outdoor socialising, the Euros finishing and increased immunity via vaccines and infections.

Experts also agree the effects of the July 19 relaxation of social-distancing guidelines will not show up in the data for several days. 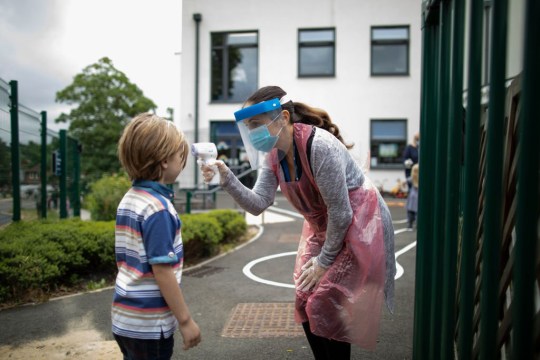 Tens of thousands of Covid-19 cases were picked up in schools and many more told to self-isolate but that testing is no longer happening due to the holidays (Picture: Getty)

Hospitalisations and deaths are continuing to rise but those measures consistently lag behind cases by about a fortnight so may yet start to come down too.

Dr Tildesley, a member of the Scientific Pandemic Influenza Modelling group (Spi-M) advising ministers, said he was ‘cautiously optimistic’ but said it was too soon to say if the third wave is receding ahead of schedule.

The University of Warwick academic told BBC Radio 4’s Today programme: ‘I think what we need to think about, though, is that there has been a change recently and I think the big one is that, in a lot of parts of the country, schools have now closed for the summer. 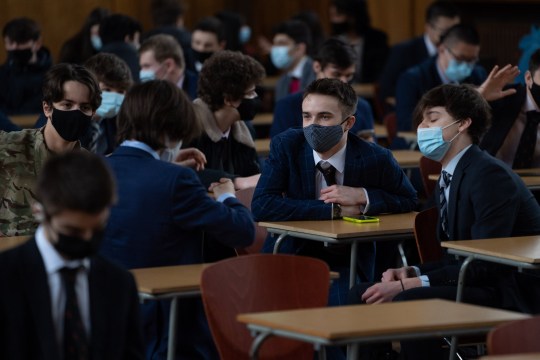 47,000 school pupils in England tested positive in a single week towards the end of term (Picture: SWNS)

‘Now, of course, because of that, what that means is… secondary school children have been doing lateral flow tests twice a week for quite a long period of time and we know at the moment cases are slightly higher in younger people, (and) because schools have now broken up, it may be that part of the reason cases have dropped somewhat is that we’re not detecting as many cases in younger people now.’

The unexpected drop will doubtless raise questions about the quality of the government’s own modelling data but Dr Tildesley urged people not to get carried away by recent developments.

He said: ‘I think we’re going to have to wait another couple of weeks before we see, firstly, the effect of the July 19 relaxation and, second, whether hospital admissions will start to go down.

‘I think if they do then at that point we can be much more confident that we’re starting to see, hopefully, this wave turning round’

His comments come as it emerged Boris Johnson is considering rolling out vaccine passport to universities this autumn.

The Prime Minister is reportedly ‘raging’ about lower vaccine uptake among younger people.