Dramatic footage has revealed the moment four giant cooling towers at a former power plant were demolished this morning.

The 300ft (90m) structures at Eggborough power station in North Yorkshire were levelled in a controlled explosion, as dozens of spectators gathered to watch.

The coal-fired power station was decommissioned in 2018, with four of its eight towers, each holding around 11,000 of reinforced concrete, crushed as part of redevelopment plans.

The towers were visible for miles around and had been a Yorkshire landmark for more than 50 years.

Police closed roads and 40 security guards patrolled a 350m exclusion zone as the demolition was carried out by contractor, DSM, on Yorkshire Day, an annual celebration of the historic county.

Many took to social media to post tributes and memories of the cooling towers, describing it as the end of an era.

The site, acquired by the St Francis Group in 2019, will be turned into an industrial and distribution park once the rest of the station – including the remaining four cooling towers and a 200m (660ft) high chimney is also demolished.

And then there were four. Eggborough Power Station had four of its eight cooling towers demolished at 8 oâclock this morning. 01/08/21 pic.twitter.com/XoED3R4OX1

I painted these three small paintings in June 2018. Eggborough Power Station had 4 of its cooling towers demolished today and the last Pit Head at Kellingley Colliery went a few days after I painted them. Landscapes change. pic.twitter.com/vgYiKl0yRF


Before and after four of the eight cooling towers at Eggborough were levelled in a controlled explosion this morning (Picture: PA)

DSM technical director, Billy Young, said: ‘We are delighted that all the planning and hard work that has led up to today has enabled us to have a successful demolition.

‘We appreciate that a large number of Eggborough residents and businesses could have been disrupted by the work, but we have worked hard to communicate with them behind the scenes and by correspondence to minimise this in as much as practicably possible.

‘We would like to thank them and the wider community for their patience so far and assure everyone that we will do all we can to minimise any further disruption.’ 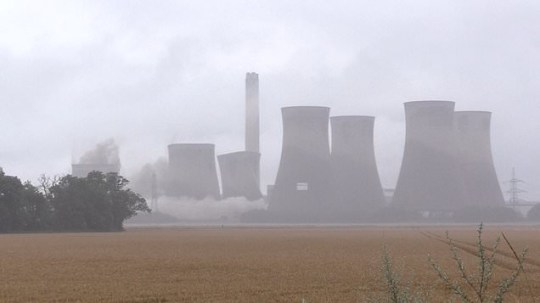 The cooling towers had been a Yorkshire landmark for more than 50 years (Picture: PA)

Two other power stations along the M62, at Drax and Ferrybridge, have also become local landmarks.

The twin Ferrybridge C power station, six miles to the west, has also been decommissioned and partially demolished.

But the Drax power station, eight miles to the east, continues to light up the nation as Britain’s largest producer of electricity – however it now relies on burning biomass instead of coal.