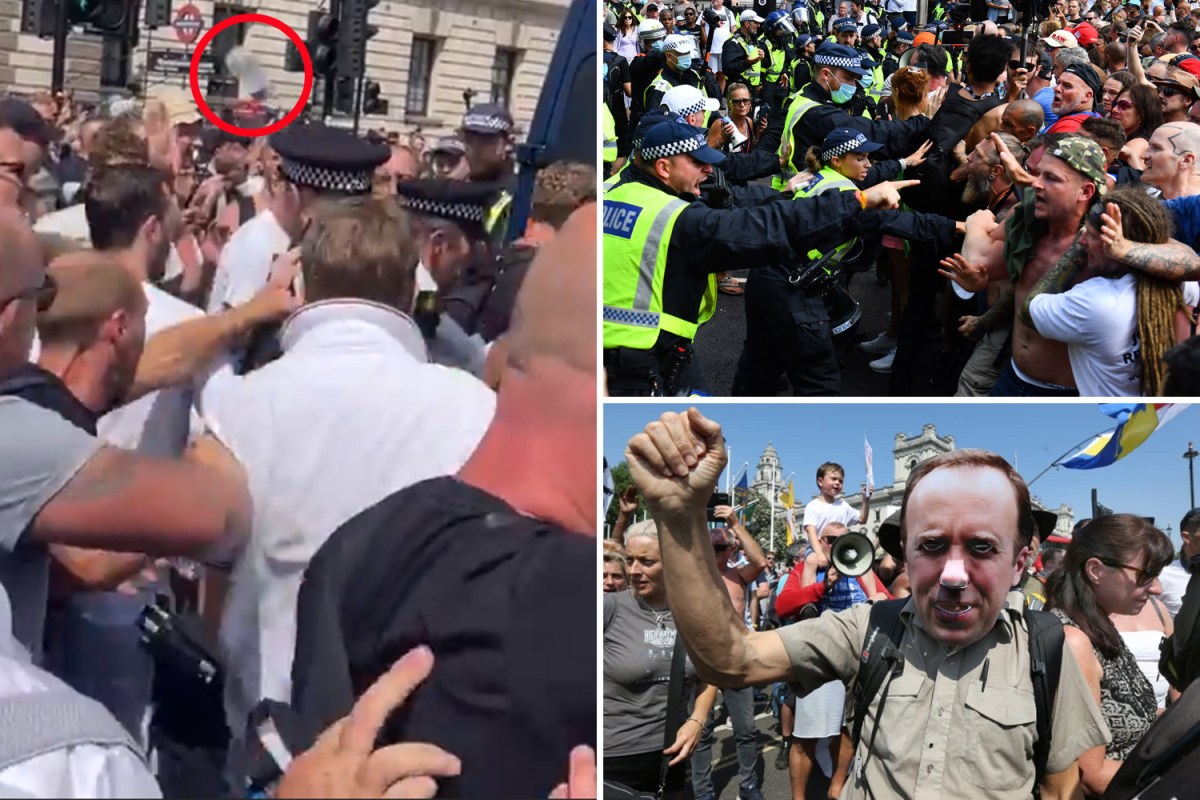 COPS have arrested 11 people at an anti-lockdown protest in London – despite all Covid restrictions being lifted.

Yobs pelted officers with bottles and demanded they remove their masks in chaotic scenes outside the Houses of Parliament this afternoon.

A large crowd of protesters assembled outside the Houses of Parliament this afternoonCredit: EPA 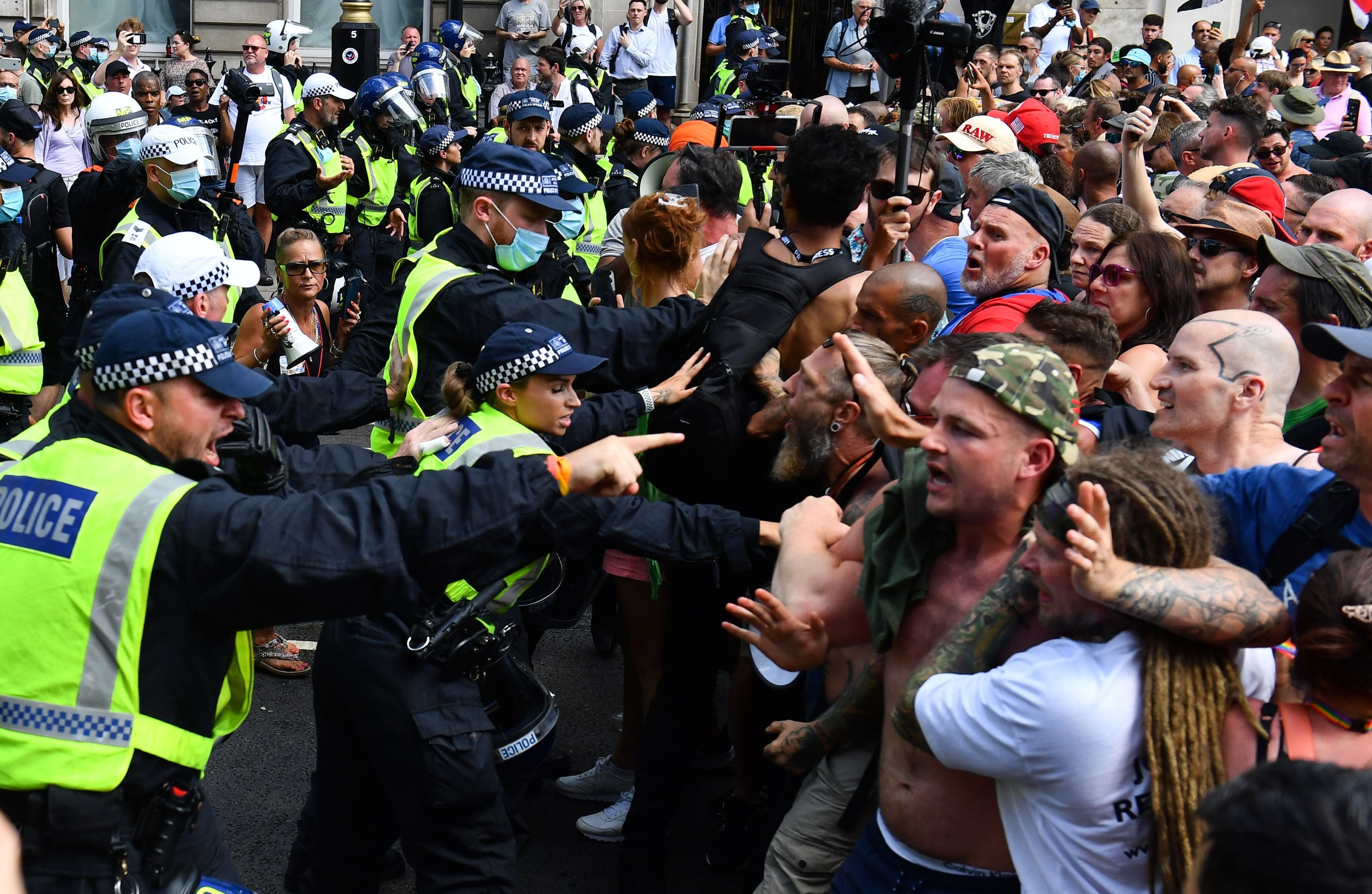 Thousands have gathered outside the Houses of Parliament and have blocked roads on Freedom DayCredit: Rex

Demonstrators blocked a road and forced traffic to a standstill on ‘Freedom Day’ as all legal Covid measures were lifted.

But anti-lockdowners still flocked to the centre of London with anti-vaccination and anti-police signs.

Protesters chanted “shame on police” and “arrest Boris Johnson” as they moved from Parliament Square to spread onto the road and up to the gates of the Palace of Westminster.

An officer was later seen putting a lock on the gates at the entrance to Parliament.

The Met Police said, shortly after 3pm, that officers continued to respond to the demonstration in central London and that 11 people had been arrested for a variety of offences.

In a post on Twitter, the force added: “Our policing operation continues, sadly officers have been met with hostility while engaging with crowds.”

And a shocking video shows demonstrators pelting police officers with bottles as they attempted to clear the road. 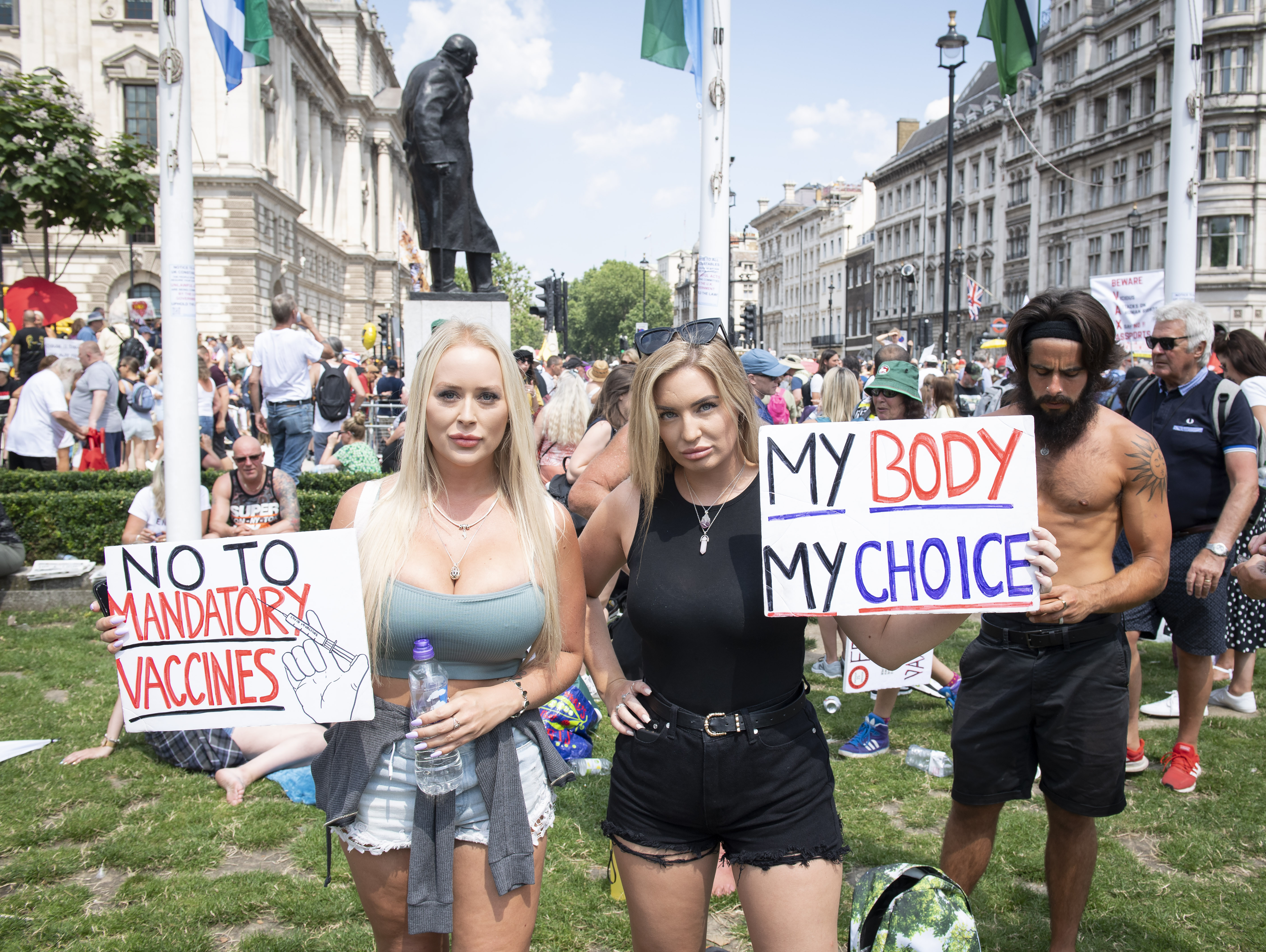 The protest has been met with criticism since many restrictions ended today.

From today Brits will no longer receive a fine if they don’t wear a face covering on public transport, the PM has announced.

Commuters will still be encouraged to wear a mask while on a bus or train – but this will not be legally enforced.

The one-metre-plus social distancing rule has also been scrapped in a huge boost for the hospitality industry, Mr Johnson has announced.

Boozers will also no longer need to check in to venues by scanning a QR code using the Test and Trace app, it was confirmed tonight.

And Brits will be heading back to the office after months of remote working.

Mass events, including festivals, will also be allowed from July 19.

But mass events outdoors, such as full stadiums and festivals, have got the go-ahead but with some element of testing or proof of vaccination required. 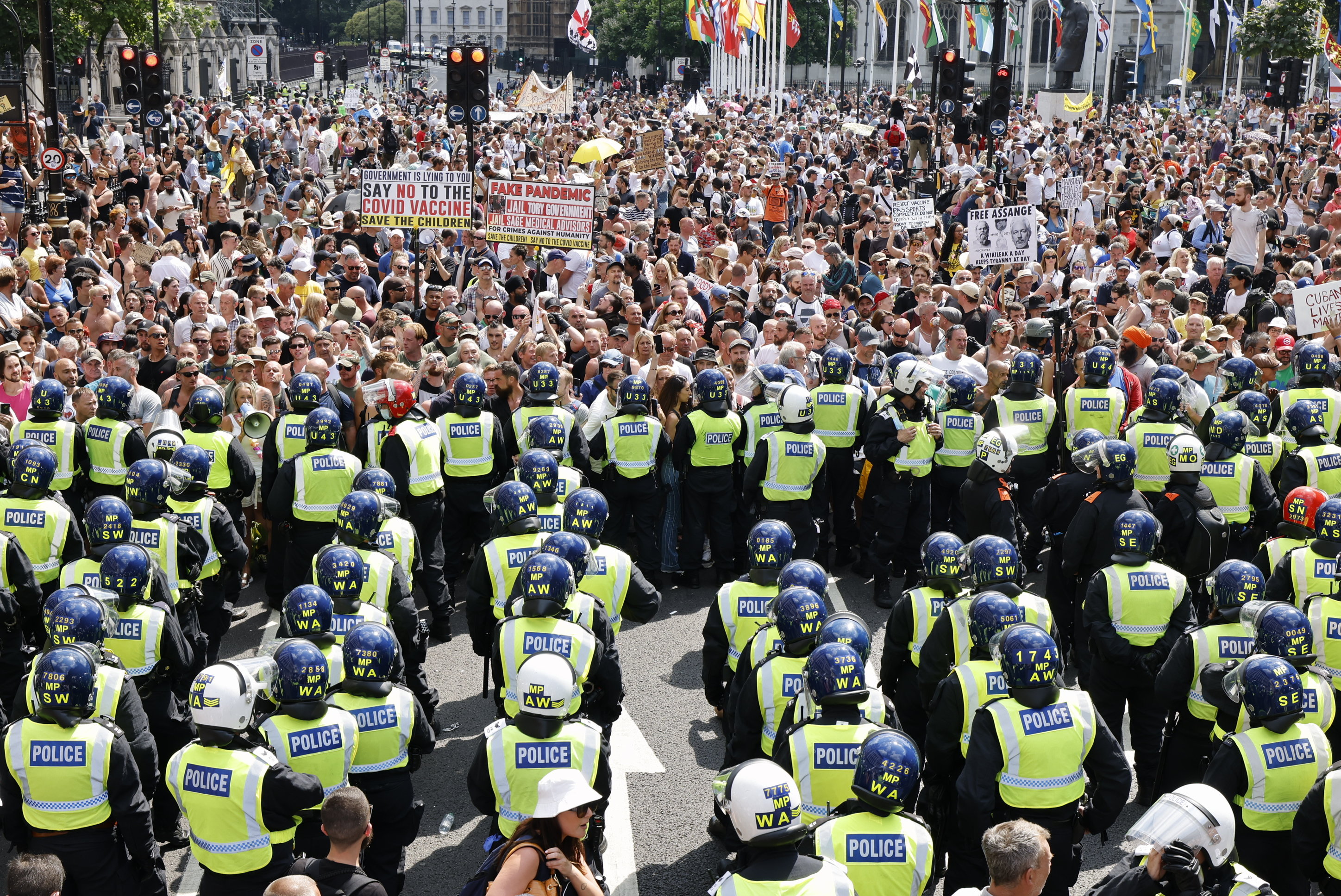 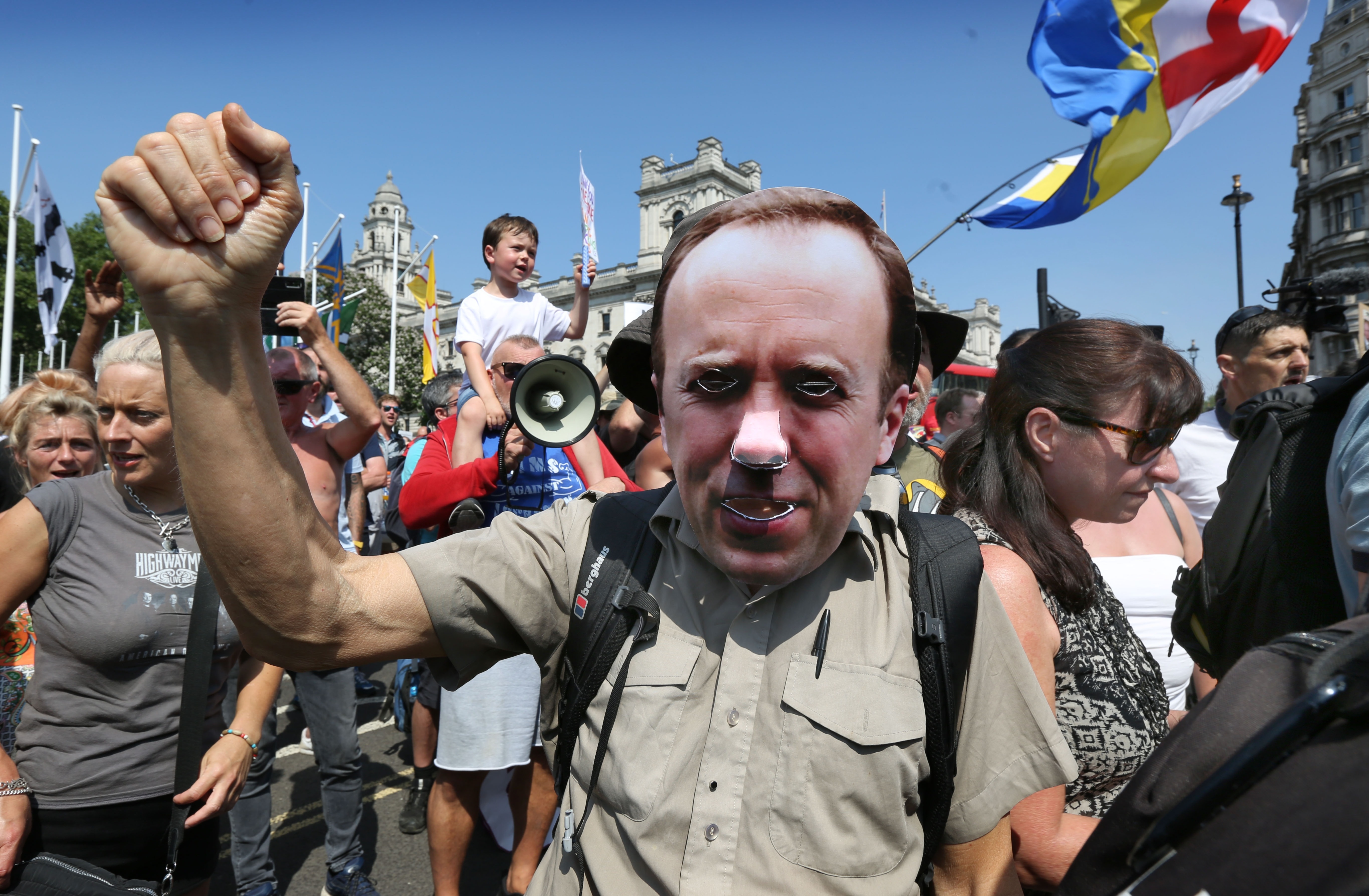 A protester wearing a Matt Hancock mask calls for the arrest of the ex-Health Secretary in Parliament SquareCredit: Getty 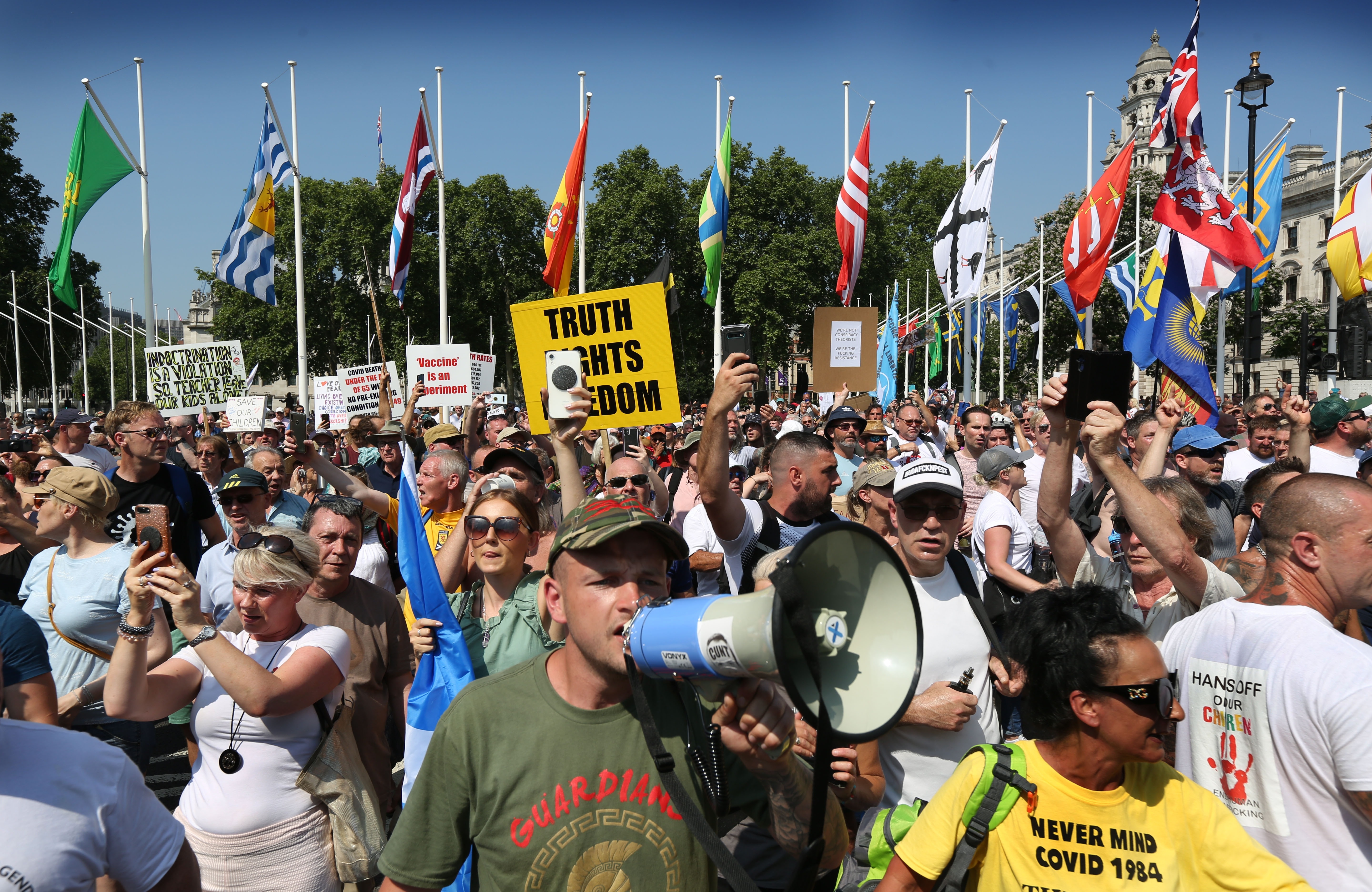