The birth of moons has been captured by astronomers for the first time.

They were being created from a dusty circle surrounding a Jupiter-like world 370 light years from Earth.

The discovery opens a window into the evolution of the universe as moons are thought to hold more potential for finding life than planets.

Lead author Dr Myriam Benisty, of the University of Grenoble, France, said: ‘Our work presents a clear detection of a disk in which satellites could be forming.’

Images from the ALMA observatory in Chile show it has a diameter of around 100 million miles – about the distance of the Sun to the Earth.

There is enough debris whizzing round to make up to three moons the size of ours.

The planet is one of a pair found two years ago in the constellation of Centaurus. They orbit the star PDS 70 – which is only 5.4 million years old.

Named PDS 70c, the gas giant is twice as big as Jupiter. It takes 227 years to complete an orbit.

The duo carved a cavity in the disk as they gobbled up material – growing in size.

During the process, PDS 70c acquired its own ‘circumplanetary disk’ – where moons can take shape. 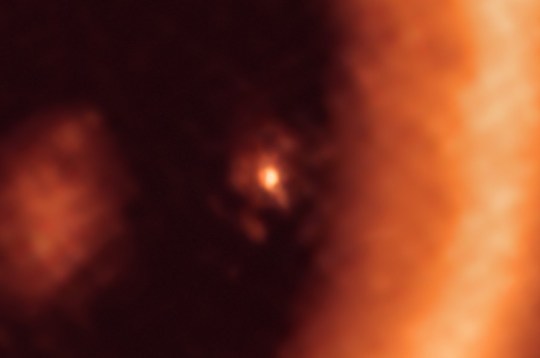 Dr Benisty said: ‘Our ALMA observations were obtained at such exquisite resolution we could clearly identify the disk is associated with the planet. We are able to constrain its size for the first time.’

It has a similar structure to the one which gave rise to the 79 moons of Jupiter.

Co author Dr Sean Andrews, of the Harvard-Smithsonian Center for Astrophysics (CfA) in Cambridge, Massachusetts, said: ‘We used the millimetre emission from cool dust grains to estimate how much mass is in the disk and therefore, the potential reservoir for forming a satellite system around PDS 70c.’

The results published in The Astrophysical Journal Letters are key to finding out how moons occur.

But the exact processes have never been caught in the act – until now. 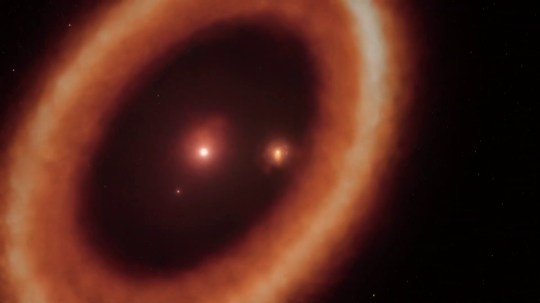 The system features a star at its centre and at least two planets orbiting it, PDS 70b (not visible in the image) and PDS 70c. (AFP)

Co author Dr Stefano Facchini, of the European Southern Observatory (ESO) in the Atacama Desert, said: “In short, it is still unclear when, where, and how planets and moons form.”

Circumplanetary disks disappear within around 10 million years. They emerged in our solar system less than four billion years ago.

Co author Dr Miriam Keppler, of the Max Planck Institute for Astronomy, Heidelberg, Germany, said: ‘More than 4,000 exoplanets have been found until now, but all of them were detected in mature systems.

‘PDS 70b and PDS 70c, which form a system reminiscent of the Jupiter-Saturn pair, are the only two exoplanets detected so far that are still in the process of being formed.’

They have been watched with other telescopes and instruments many times since.

Added Dr Facchini: ‘This system therefore offers us a unique opportunity to observe and study the processes of planet and satellite formation.’ 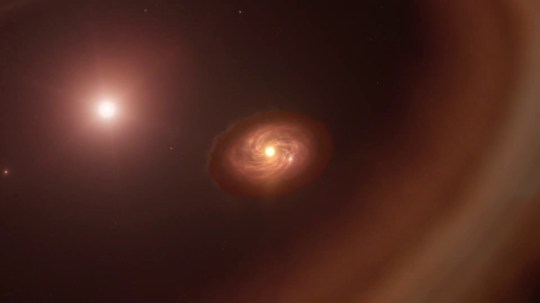 The study also found PDS 70b does not show clear evidence of such a disk – as it was starved by its ‘sister planet’.

Co author Dr Richard Teague, also from the CfA, said: ‘The ELT will be key for this research since, with its much higher resolution, we will be able to map the system in great detail.’

In particular, the team will look at the gas motions surrounding PDS 70c to get a full 3D picture.