People in the area have been warned their homes and businesses are at risk (Picture: UKNIP; Rob Day; PA; Getty)

People living in Wood Street, Walthamstow, are reported to be in waist-high water inside their home, with emergency services racing to the scene to help.

Parents and their children are said to have been trapped in vehicles in four feet of water on the M11.

Dramatic footage also shows cars stranded on the A406 with parts of the road closed and rescue service staff wading through water.

It comes after amber warnings for storms were issued for London and some of the Home Counties.

A spokesperson from the London Fire Brigade said firefighters were working with police to tackle flooding at Charlie Brown’s roundabout in South Woodford.

A statement from Highways England said: ‘The M11 southbound exit Slip Road to the A406 W/B Waterworks at J4 (A406 North Circular is currently closed due to flooding in the carriageway.

‘Met Police are currently at scene, Traffic Officers are on their way to the area to assist.’ 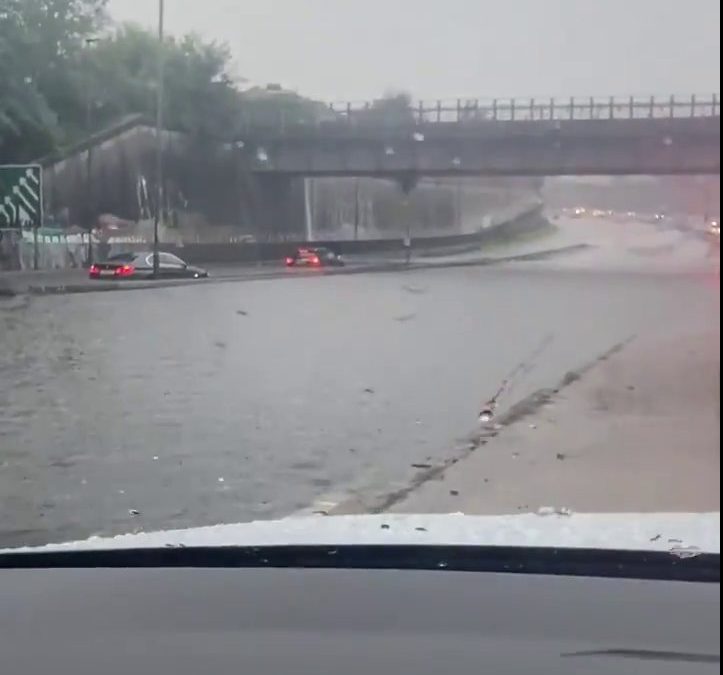 Cars are stranded as the A406 is hit with flooding (Picture: @sophdaws183) 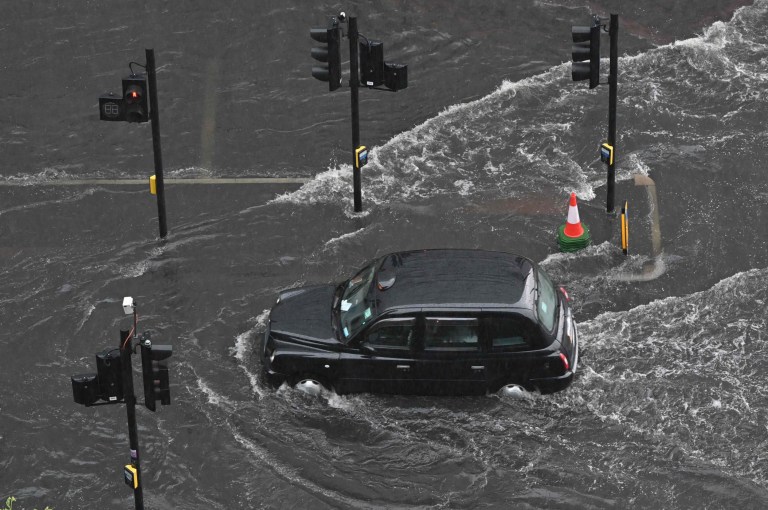 A London taxi drives through water on a flooded road in The Nine Elms district (Picture: AFP via Getty Images) 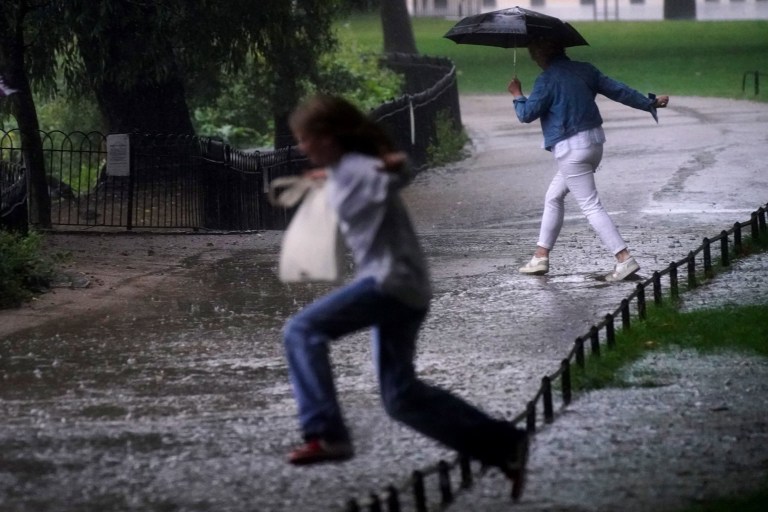 Another post later added: ‘A3 Northbound has been closed at #Esher by #Surrey Police. This is due to serious flooding further up on TfL ground at Tolworth.’

IT consultant Jamie Curtis said it was the worst flooding he’d ever seen in the area.

He had to drive through water that was ’12 to 18 inches deep’ while driving through Clapham Common on his way home to Kingston, Hampshire.

Londoner Eddie Elliott, 28, cycled past the area outside Queenstown Road station, where he said the road had been ‘totally shut down’.

He said: ‘Having been born and raised in London, I have never seen anything quite like it.

‘Stands out as the worst I’ve experienced personally… totally shut down the whole road with buses stood broken down in the water.’

Met Office meteorologist Steven Keates earlier predicted parts of the south between south Suffolk and the Isle of Wight could be deluged by 100mm of rain in just a few hours this evening.

He said: ‘There’s torrential thunderstorms around yet again.

Into the evening, from Norfolk to Bournemouth we are going to see some pretty lively showers.

‘Torrential downpours, thunder and lightning and potentially some hailstones are settling in the south.’ 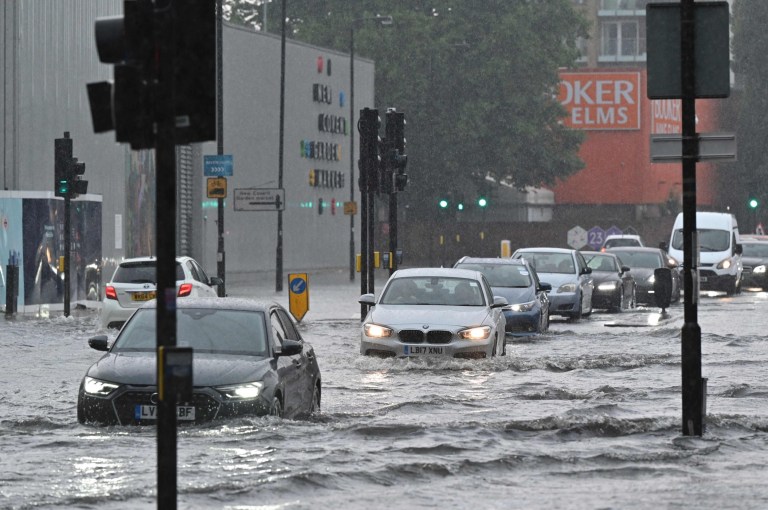 Cars drive through deep water on a flooded road in The Nine Elms district as thunder and lightning hits the capital (Picture: AFP via Getty Images) 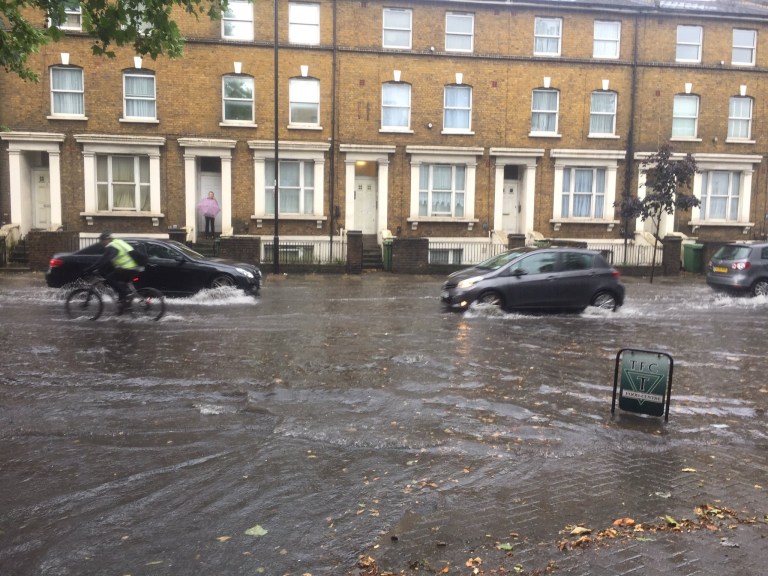 Forecasters have warned homes and businesses are at risk, with pictures showing heavy flooding in Camberwell, London (Picture: @ash97840774) 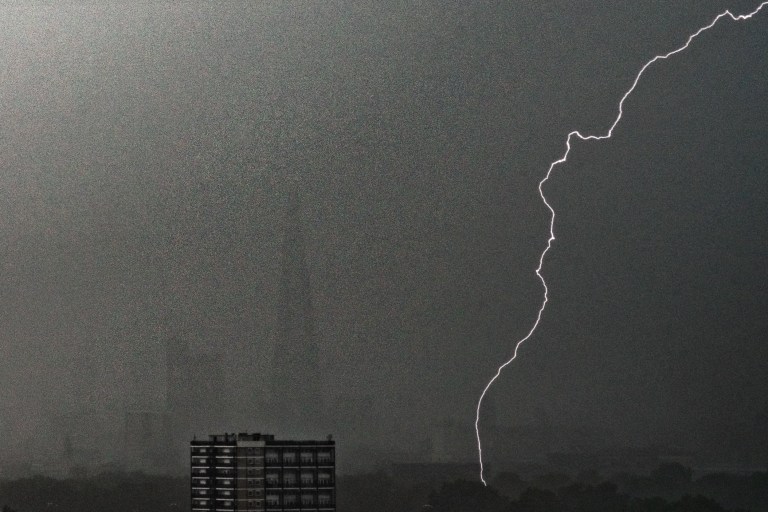 Mr Keates said the storms are being caused by a ‘convergence’ of air currents, due to warmth in the earth’s surface from the recent heatwave rising into cooler air in the atmosphere.

Kingston Police, who oversee a borough in the amber zone for storms, warned motorists to ‘drive carefully’ and remember they are ‘not driving a submarine’.

The force wrote in a tweet: ‘Do not enter what could possibly be deep water.

‘Watch your speed and distance as stopping distances will be greater.’

It comes days after thousands flocked to beaches as the UK sizzled in a 32C heatwave.

Neighbours heard an ‘enormous bang’ as the strike set two homes ablaze on Mercia Avenue, and an elderly woman, 70, was assessed by paramedics.

It will be a mixed bag when it comes to weather next week, with the Met saying: ‘Looking ahead to next week it will remain more widely unsettled with periods of rain expected though some sunshine too at times.’