Family send each other same birthday card for 50 YEARS

A FAMILY have been sending each other the same birthday card for almost 50 years – and it’s so fragile they now hand-deliver it.

John Saunders, 33, says the tradition was started by his dad Dave, 69, in 1972 after he received one from his sister when he turned 21. 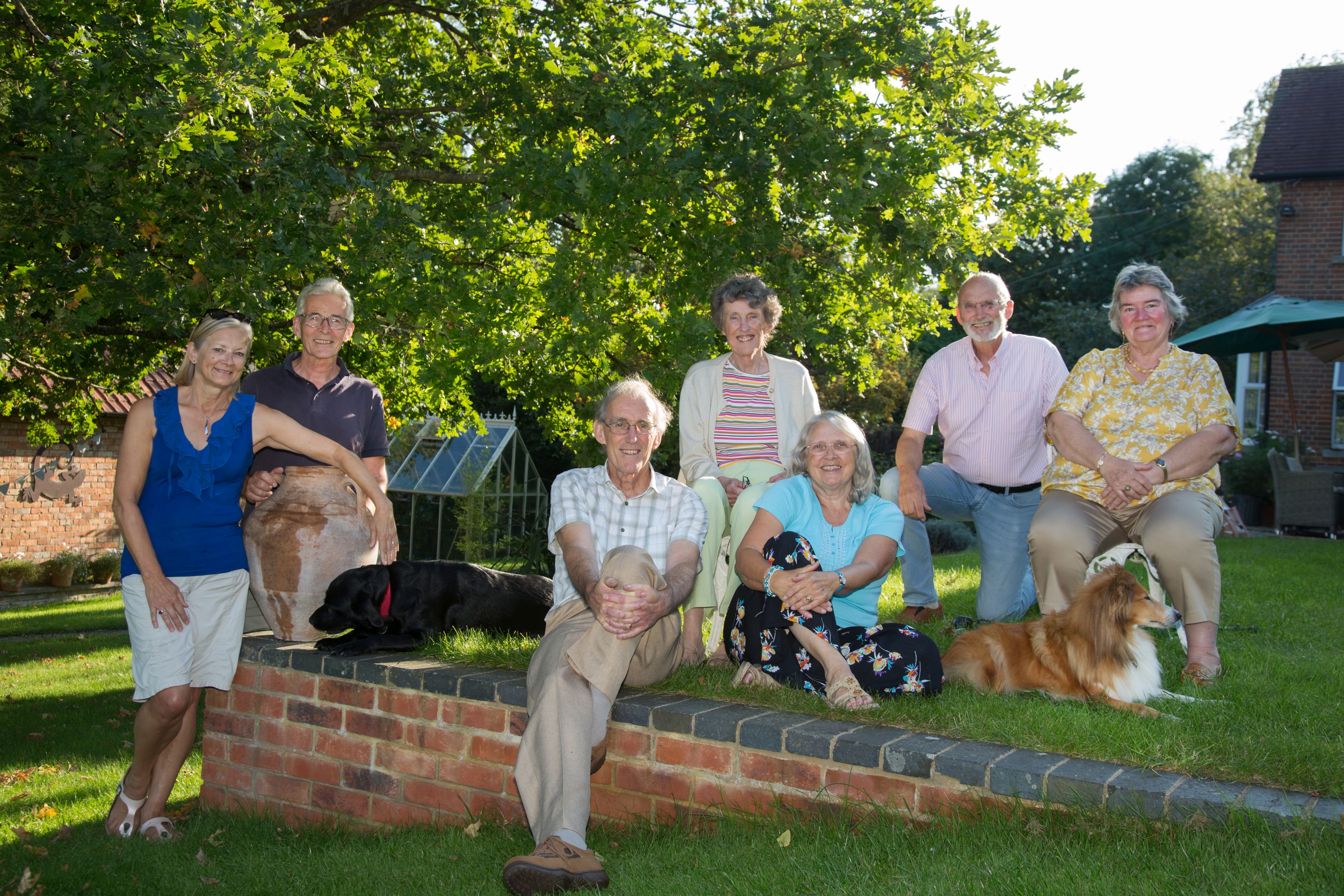 Dave Saunders, 69, started the tradition when he was first sent the card from his sister on his 21st birthdayCredit: Kennedy News/Dave Saunders 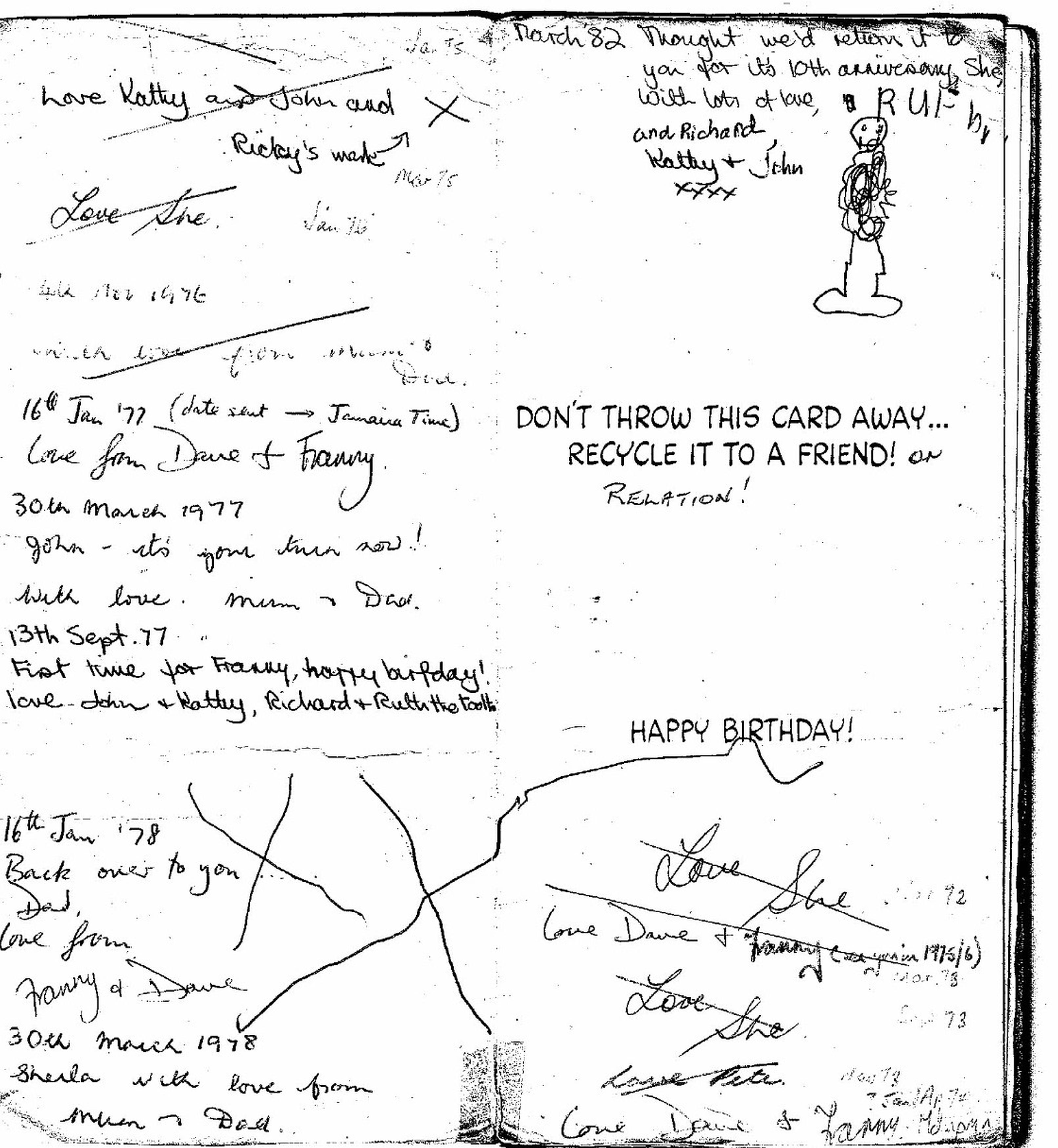 The card travelled from Australia for one of the family member’s birthdaysCredit: Kennedy News and Media 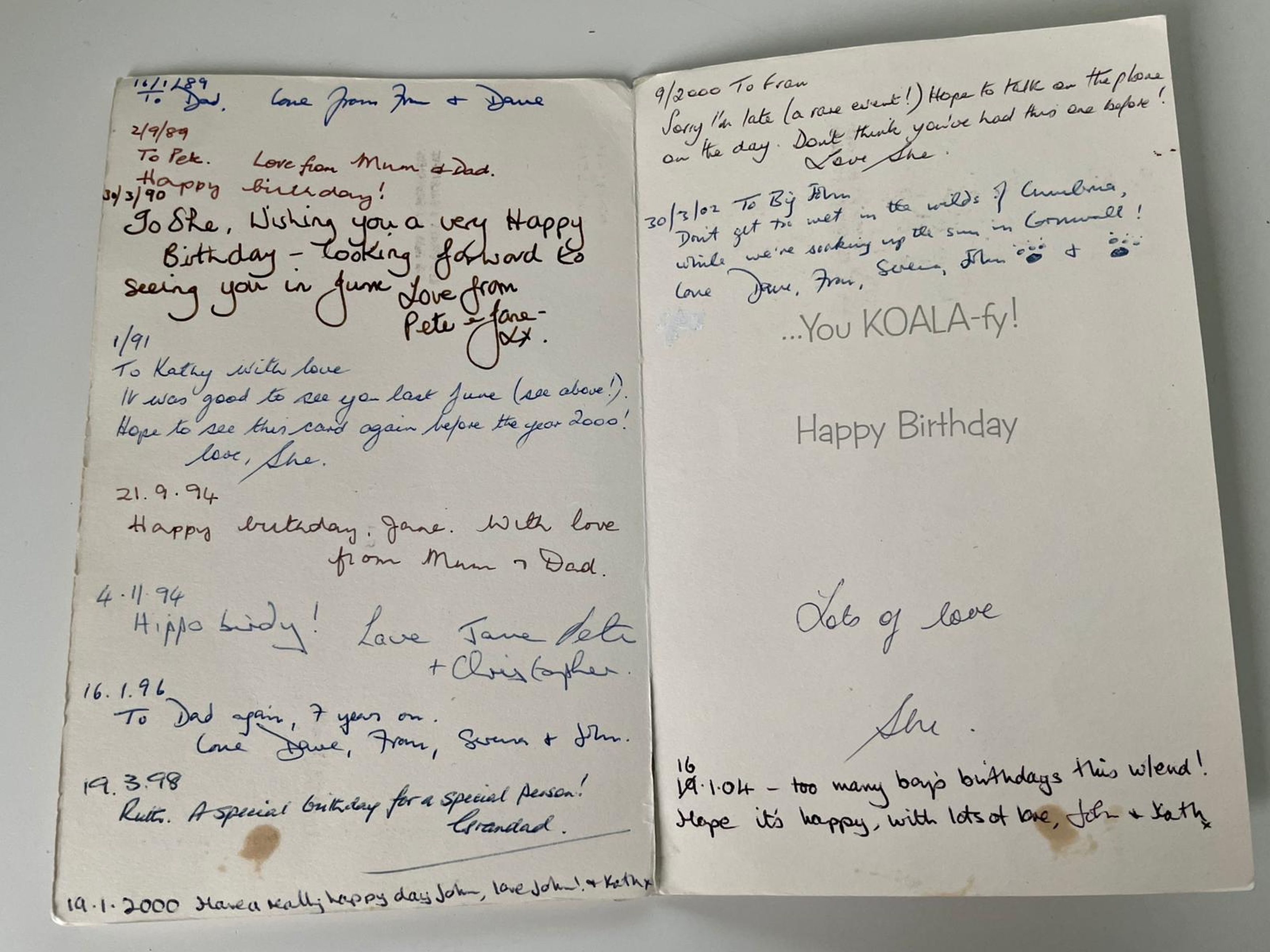 The well-loved card is covered with tea stains and children’s scribblesCredit: Kennedy News and Media

The family now have around 30 cards that they circulate between each other.

They have lines of signatures and notes to each other – with the oldest card dating back 49 years.

Many are filled with tea stains and children’s doodles.

Technical sales worker John has received dozens of similar repurposed cards since being a child, with pages being sellotaped on the back to allow for more messages.

John, of Bath, Somerset, said: “It’s a lovely record of our family history. We never knew how big this would get.

“It’s astonishing that so many people love it and want to start the tradition.

“I heard on the radio years ago that some of the call-ins had cards that were 20 or 30 years old, but none as old as our ones.

“The tradition has been going for 49 years. Let’s keep going for another 50-plus.

“The reaction has been incredible.”

John’s dad Dave first started reusing the greeting card from his sister Sheila, now 73, in 1972, sending it back to her the following year, signed by himself and his wife Fran.

It’s absolutely filled with different people’s handwriting and you have a full history of who it’s gone to.

John said: “My aunty Sheila lived in Australia and she sent a birthday card to my dad for his 21st.

“Mum and dad were at the time trying to save and recycle. They decided to reuse the card and so passed it on.

“From there, they started circulating it among the family. It was then sent to partners and over the years, more cards were added.

“After a few years, we thought ‘this is a good idea – it’s helping save the plant’. It wasn’t tapping into the wastage of commercialism and it was reusing things.

“There are several of these going round and sometimes they’ll go missing for a couple of years.

“I’ve received the cards more than a dozen times. Some years you’ll get two or three, other years you don’t get any.

“It’s absolutely filled with different people’s handwriting and you have a full history of who it’s gone to.

“We tape pages onto the back to extend it. The original card has pages and pages added it to. It’s almost a book.

“Pre-lockdown, we’d hand deliver the cards as much as possible, or we send them recorded delivery. They’re very carefully handled.

“I have an almost 17-month-old son. I do hope he carries on the tradition.” 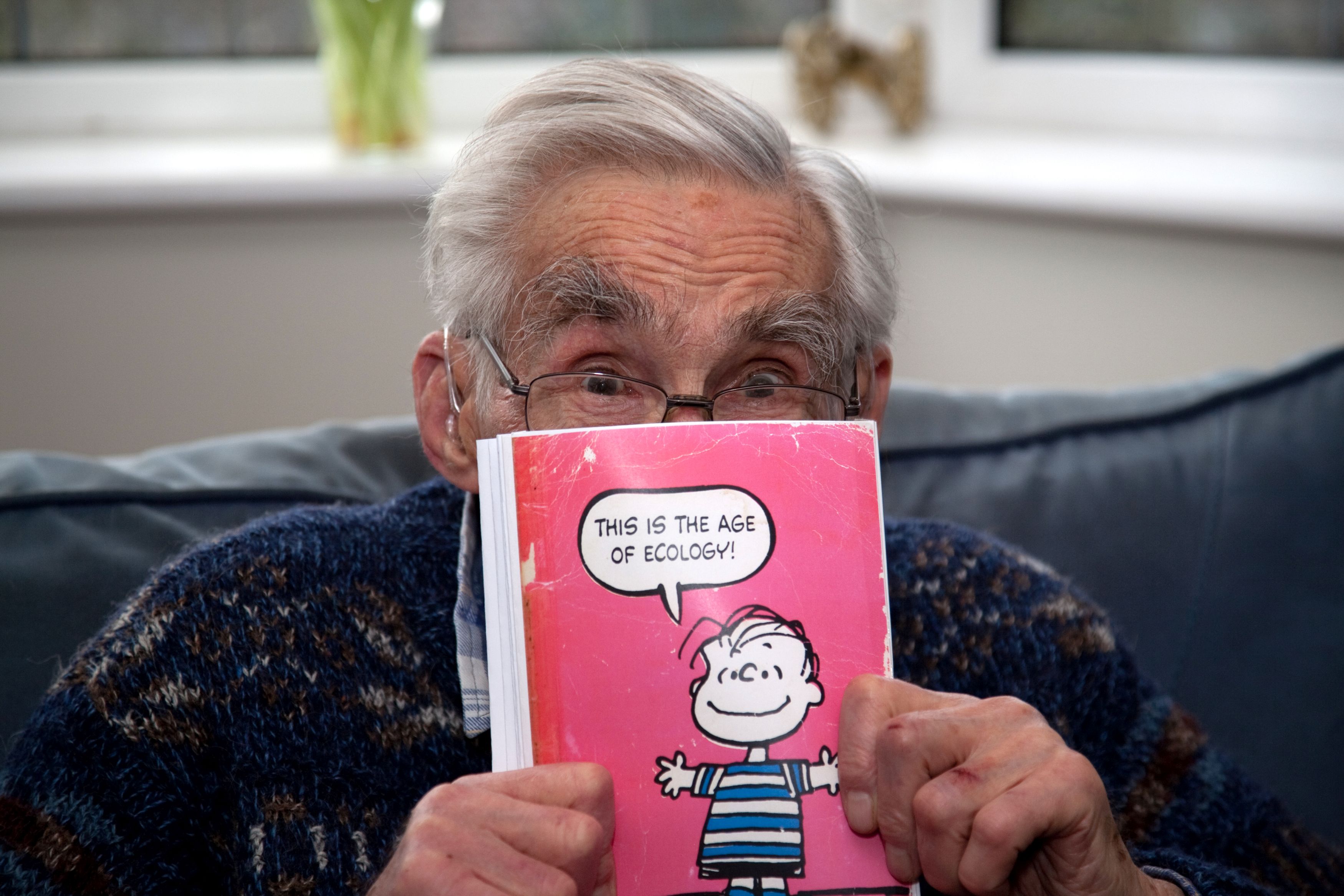 The card has had extra pages added to itCredit: Kennedy News/Dave Saunders 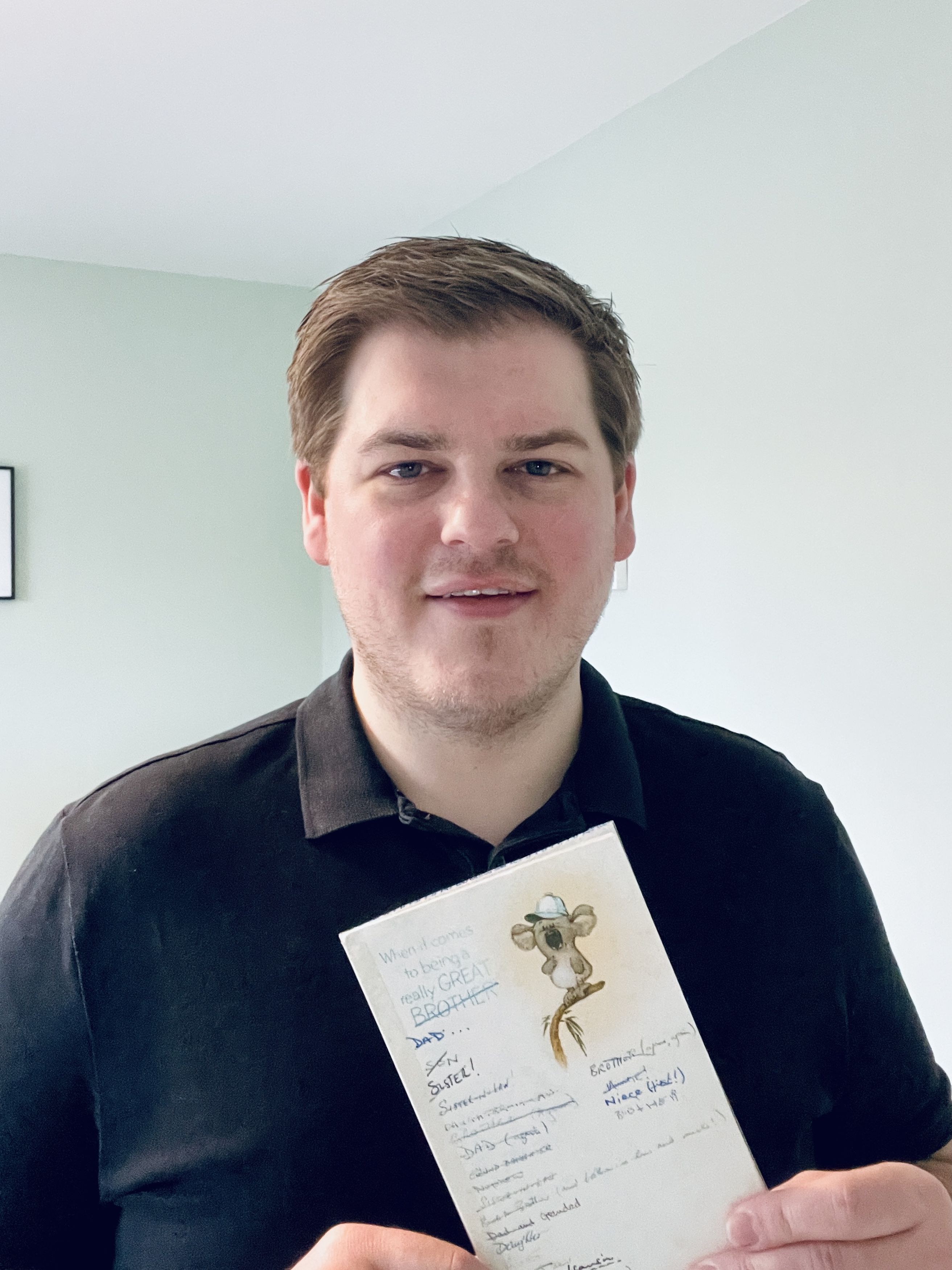 John Saunders, 33, hopes his son will carry on the traditionCredit: Kennedy News and Media