THE first Covid vaccines have been arriving in hospitals ahead of the first jabs being given out this Tuesday.

People aged 80 and over will be first in the queue for the Pfizer/BioNTech vaccine, which will be given out at 50 hubs across the country. 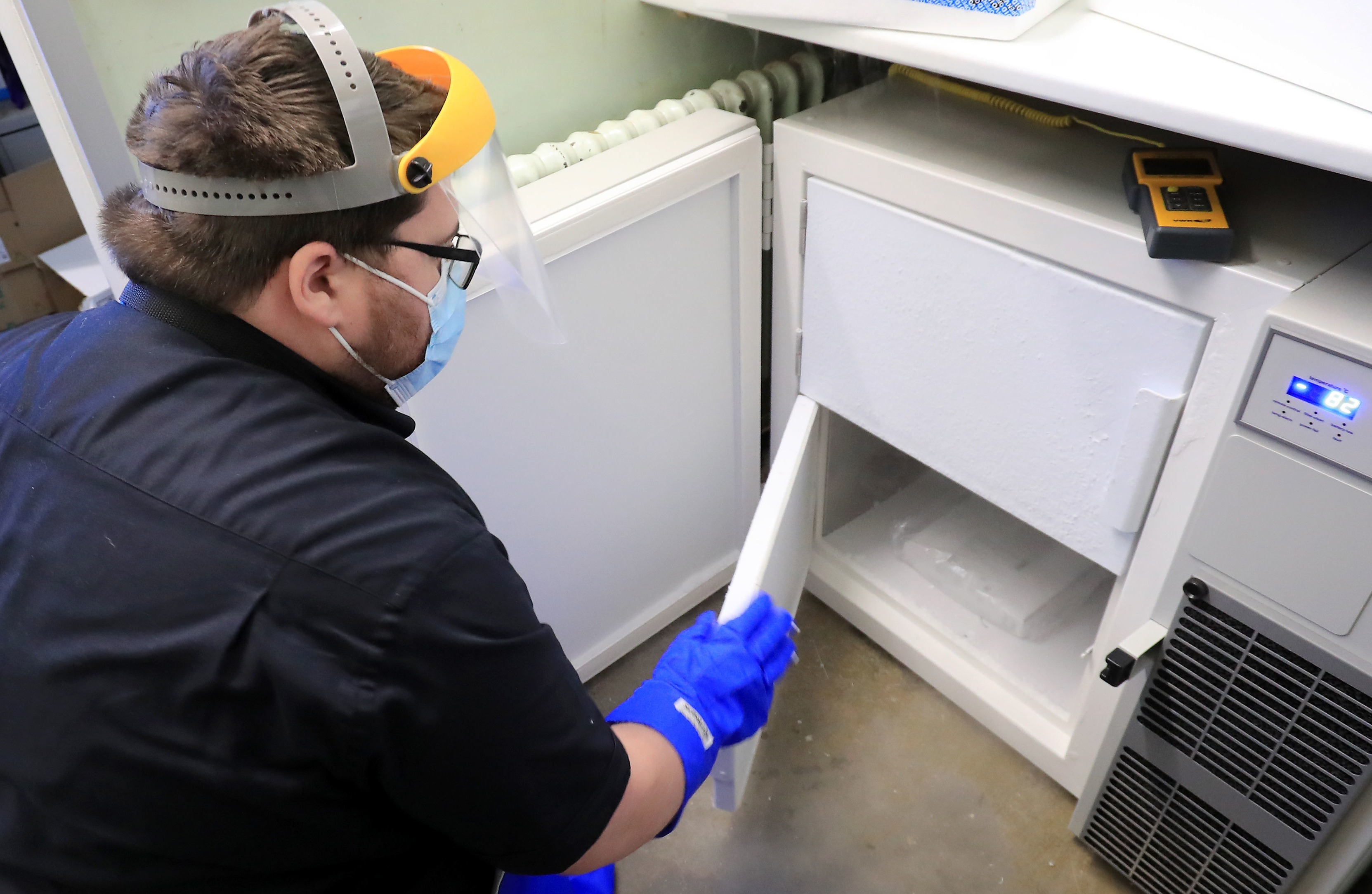 The vaccines are being kept at minus 70CCredit: Getty – Pool 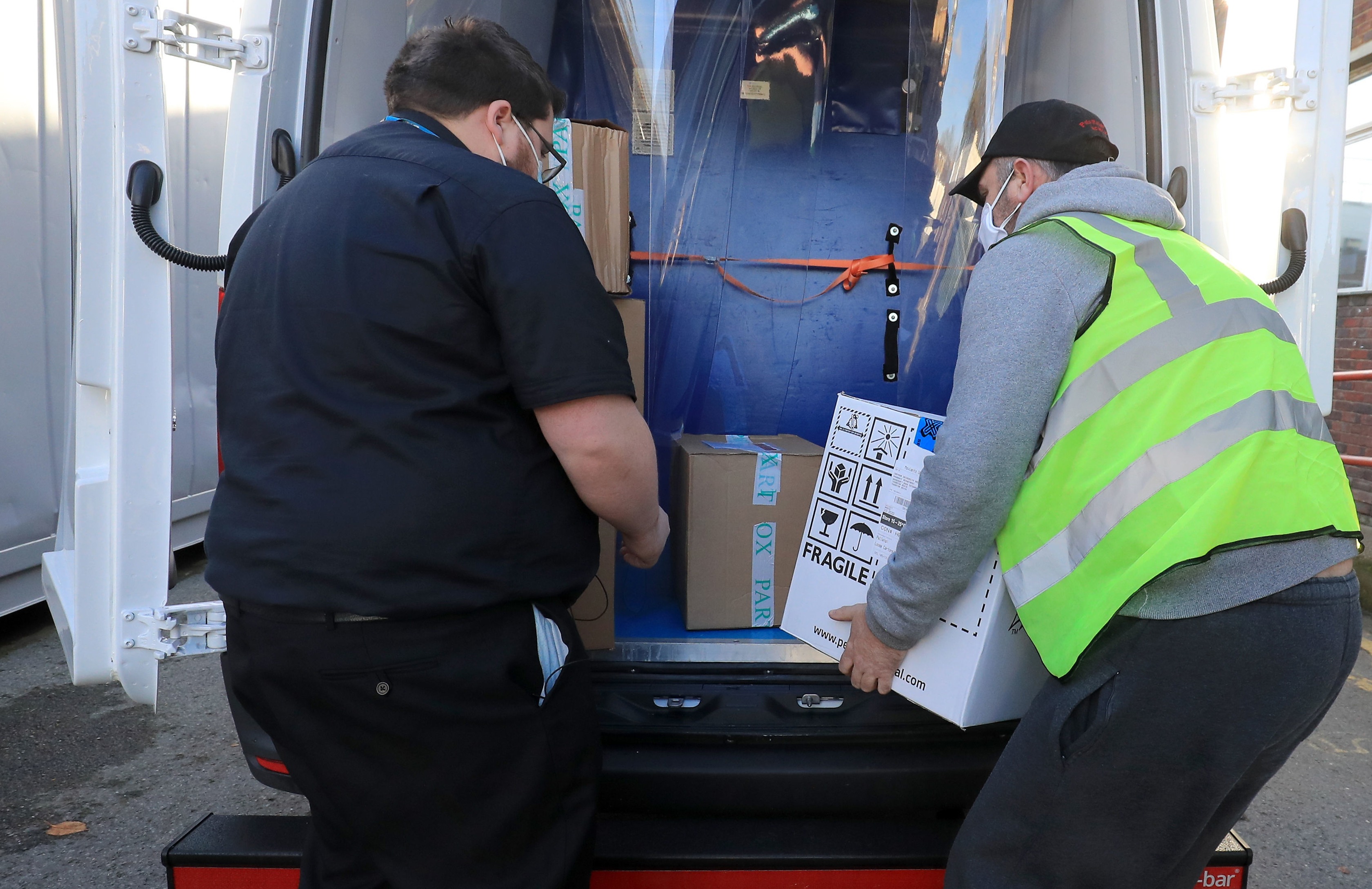 A batch of the vaccine being unloaded at Croydon University HospitalCredit: Getty – Pool

Also getting the coronavirus vaccine will be care home workers along with NHS workers who are at higher risk and all those vaccinated will need a booster jab 21 days later.

NHS staff worked through the weekend to prepare for the launch of the programme – dubbed “V-Day” by Health Secretary Matt Hancock.

Pictures show the arrival of a batch of vaccines at Croydon University Hospital in south London over the weekend, with similar scenes unfolding all around the country.

On arrival in Croydon, the batch of vaccines was unboxed by a pharmacy technician wearing specific protective equipment to ensure he is able to safely handle the delivery at such cold temperatures.

After going through final quality control checks the batch is placed in a freezer to ensure it can be kept at the right temperature until it is ready to be used. 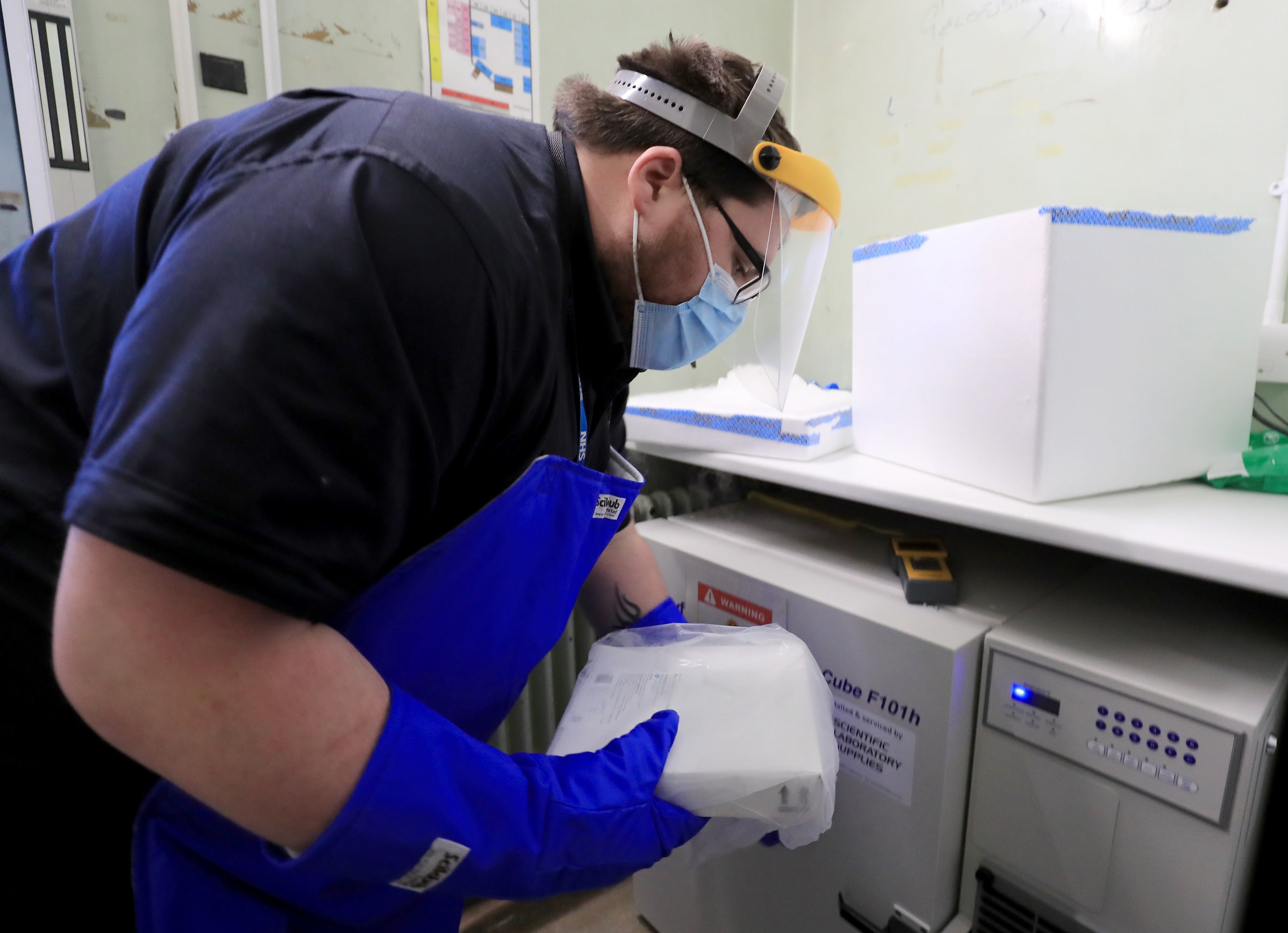 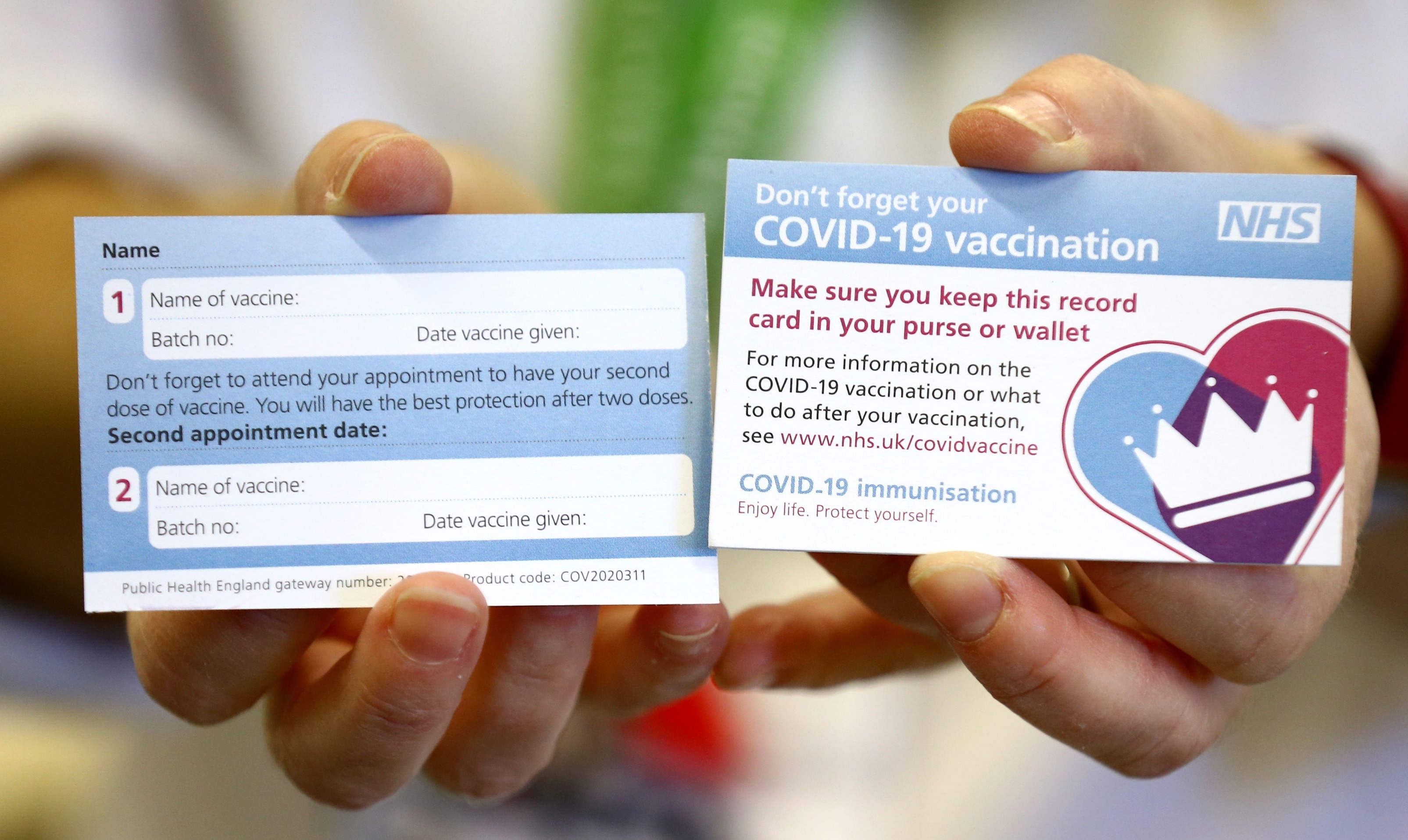 A card that will be given to people getting the vaccine Credit: Getty – Pool 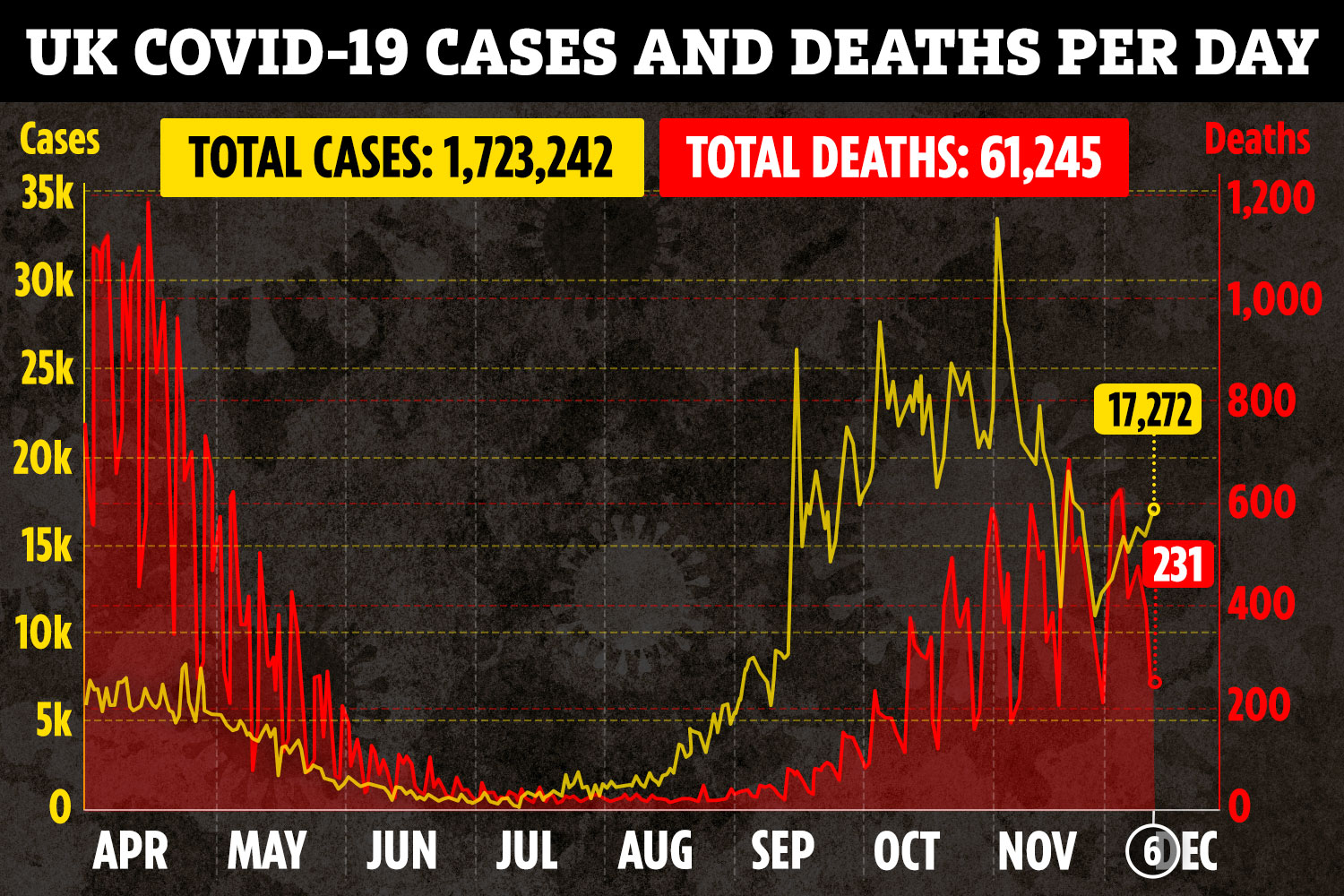 Dr June Raine, chief executive of the Medicines and Healthcare products Regulatory Agency, which approved the jab said there should be “real confidence” in the rigour of their approval.

“And I would really like to emphasise that the highest standards of scrutiny, of safety and of effectiveness and quality have been met, international standards,” she told the BBC’s Andrew Marr show.

“And so there should be real confidence in the rigour of our approval.”

She said the Commission on Human Medicines “has scrutinised every piece of data too, so there should be no doubt whatever that this is a very safe and highly effective vaccine”.

“It will help us turn the corner.

“There’s really not one of us who hasn’t been affected by this pandemic, and our organisation, like every other, has been completely focused on doing our job to be able to help defeat this terrible disease.”

The jab – which is 95 per cent effective and developed by pharmaceutical giant Pfizer and German firm BioNTech –  was given the green light by health regulators last week.

Ahead of approval, the Government had secured 40 million doses of with 10 million due in the UK by the end of the year.

Patients need two doses, meaning not enough shots have been secured for the entire UK population.

After the most vulnerable have been vaccinated, the jabs will be rolled out across the country in order of priority.

The vaccine is being stored in specially installed coolers, designed to hold the vaccine at the required minus 70C.

In the past it has taken years, sometimes decades, to produce a vaccine.

Traditionally, vaccine development includes various processes, including design and development stages followed by clinical trials – which in themselves need approval before they even begin.

But in the trials for a Covid-19 vaccine a process which usually takes years has been condensed to months.

Another vaccine being developed by Oxford University has been shown to be up to 90 per cent effective and can be stored at room temperatures.

The Oxford/AstraZeneca jab is cheaper and easier to distribute than the US’s Pfizer and Moderna vaccines.