Freedom Day rules: What can you do from today?

Life will start to return to some form of normality again (Picture: Getty)

Today marks the long-awaited ‘Freedom Day’ when life can largely return to how it was before Covid-19 struck the country.

After more than a year-and-a-half of lockdowns and restrictions, almost all remaining measures have today lifted in England.

This means nightclubs can reopen for the first time since the pandemic hit, you’ll no longer have to put a six-person cap on your dinner bookings, and many will begin to return to the workplace.

The guidance has also shifted considerably, with responsibility around how to curb the spread of the virus moving largely from the state to citizens and company bosses.

So-called ‘Freedom Day’ only applies to England, as Wales, Scotland and Northern Ireland have each set out their own separate plans for easing restrictions.

Boris Johnson had planned to lift all restrictions from today but hopes of a complete return to normality have been dashed by the spread of the highly transmissible Delta variant, first identified in India.

Despite infections spiking above 40,000 a day, with warnings they could reach 200,000 this summer, the prime minister insisted ‘now is the right moment to proceed’ but ‘with caution’.

This means some measures, including those around travel and self-isolation, will remain in effect for the foreseeable future.

So, what exactly will change from today?

For the first time in months, you will no longer have to be picky about who to invite to social events.

From today, the indoor rule of six is a thing of the past. 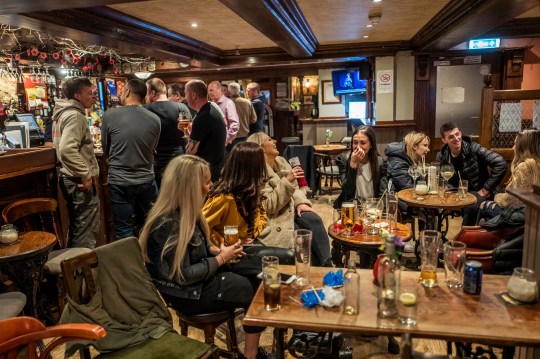 The awkward ‘sorry we’ve already got six’ conversation will be a thing of the past (Picture: Getty)

This means groups of more than six from multiple households will be able to spend time together both outdoors and indoors.

The one metre plus rule has also been abandoned, paving the way for hospitality businesses and offices to welcome more people back inside premises.

This means that restrictions on being seated in pubs will end, with people allowed to drink at the bar again rather than sticking to table service only.

It’s been a long time since Britons have been able to spill a drink or show off their most energetic fist pumps on a dancefloor.

Tonight, clubs and bars with dancing areas will reopen with a bang, in what is a welcomed return for the hard-hit nighttime industry.

With social distancing rules abandoned, revellers will not have to wear face masks inside and they are free to head to the bar to get the rounds in. 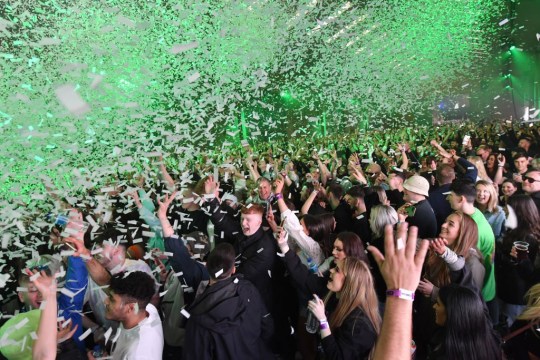 Monday will be a big night as nightclubs reopen (Picture: Getty)

Nightclubs, along with hospitality businesses, will not ask customers to scan a QR code on entry as the legal requirement to do also ends today.

However, the prime minister has ‘urged’ large venues, clubs, restaurants and pubs to request to see proof of immunity against infection upon entry.

This would be in the form of an NHS pass, or a so-called vaccine passport, which would provide proof of a negative test, natural immunity due to a recent infection, or vaccination.

But a number of large venues have already ruled out using them as they will not be a legal requirement.

No limit on weddings, funerals and festivals

Thousands looking to celebrate their big day or pay tribute to a lost loved one have had their guest numbers heavily capped at just 30 people.

This means people will be able to celebrate life events in largely the same way they did before. 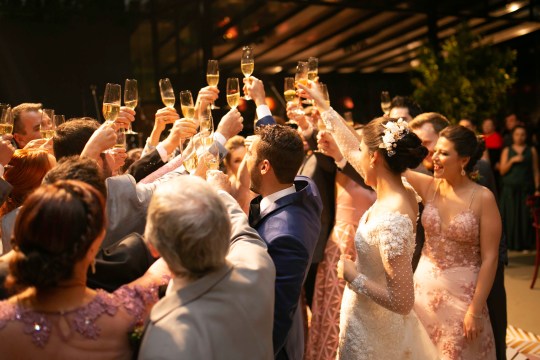 There will be no guest limit on weddings (Picture: Getty)

Festivals, which have had to keep cancelling or delaying their annual events, will be able to now pick a date and stick to it as there will be no limits on attendees.

Until today, all Britons – unless exempt – have been required by law to wear a face covering on public transport and inside shops, pubs and other indoor public areas.

Face masks will no longer be compulsory from today but the prime minister ‘expects’ people to continue wearing them in busy or ‘enclosed spaces’.

The decision has sparked heavy backlash from experts and politicians, who have slammed the move to ‘personal responsibility’ as ‘reckless’ and ‘irresponsible’.

Mr Johnson said he hoped people would continue to think about the health of those around them – but critics argue that many will stop wearing masks if they don’t have to.

A number of cities and regions have introduced their own rules on mask-wearing on public transport, including London, Greater Manchester, Liverpool City Region, South Yorkshire, West Yorkshire, North of Tyne, and West of England. 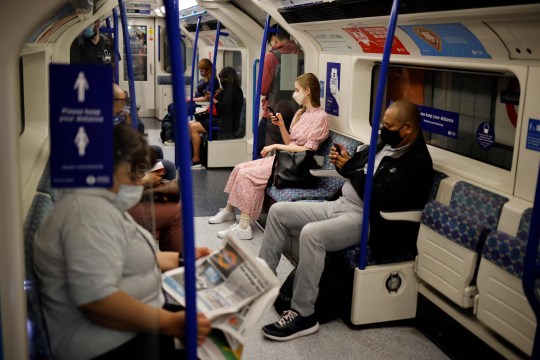 Face masks will no longer be mandatory – but some regions are keeping the rule on public transport (Picture: AFP)

The use of face coverings will become a ‘condition of carriage’, which will apply to the Underground and buses in London, the Metrolink tram in Greater Manchester, and the Tyne and Wear Metro.

They will also be mandatory at bus stations in South Yorkshire and West Yorkshire.

Zoom meetings in pyjamas could soon come to an end for many, as the Government’s advice to work from home where possible will be scrapped.

This means individual companies will now set out their own rules for returning to the office or keeping flexible working in place.

However, a return to the workplace will not be expected immediately, instead the PM says that those working from home should start heading back to the office ‘gradually’.

‘But we don’t expect that the country will return to their desks as one from Monday,’ Mr Johnson said when setting out the rules.

Travel abroad will remain uncertain for a while, as the traffic light system will not change from today.

But if you are fully inoculated against the virus will be able to travel to amber list countries without having to isolate when they return to England from today. 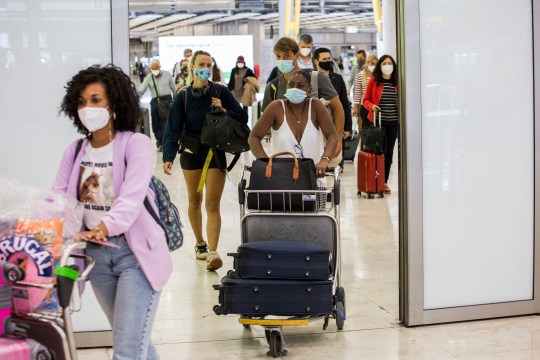 People who have had two jabs will be exempt from isolation when returning from amber countries (Picture: Getty)

Those who have received their second Covid dose within 14 days will be exempt from isolation.

All under-18s are also now being made exempt from quarantine rules when visiting the same areas.

The Government is also removing the guidance that advises people not to visit amber list countries, meaning travel for leisure, business and to see family is back on the cards.

Mr Shapps said that, in essence, his announcement means that for fully vaccinated travellers, the requirements for green and amber list countries are the same.

Beyond Monday, friends and relatives visiting care home residents will still need to wear protective equipment and be advised to minimise physical contact.

But there will be not be a limit on the number of ‘named visitors’ a resident can receive.

There will also no longer be a national limit on how many can visit in a single day.