Ghost bruised my bum, pinned mum down on her bed & laughed about horror hauntings after terrorising my workplace

A FAMILY claims that a bald ghost terrorised them from months and even subjected them to “two physical attacks” .

Leah Lewis, 21, found an “unexplainable 15-centimetre scratch” on her left butt cheek which she believes is the work of an evil spirit haunting her home in Burton-upon-Trent, Derbyshire.

Leah showing the bruise that appeared on her bum after telling the paranormal spirit to leaveCredit: @SnapperSK 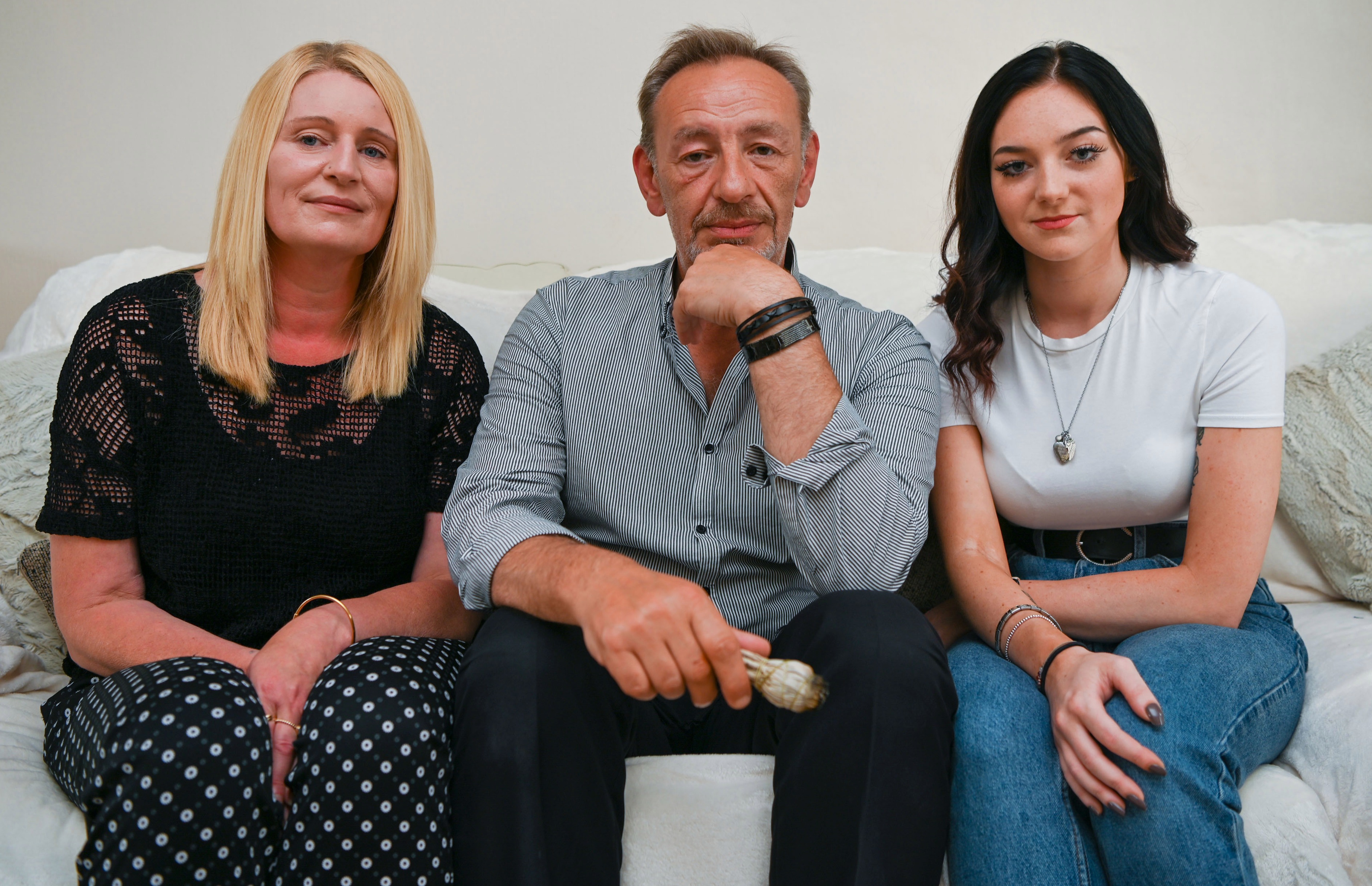 Mum Colette called in psychic medium Ian Griffiths to help and after he cleansed their house with sage (pictured)Credit: @SnapperSK

She claims the attack happened shortly after her mother Colette, 46, was “physically pinned to her bed” by the mysterious force and “was unable to move or speak” for two minutes.

Leah says she tried to rid their home of the ghost – described as tall, slender and bald – by saying aloud: “Anything not of light or love is not welcome within the house.”

But she believes the spirit, who was described as “angry and frustrated”, fought back and left a bruise on her bum that remains to this day.

The retail worker told The Sun: “My mum had an experience where she was in bed and suddenly she heard heavy breathing in her ear.

“She tried to shout for me but she couldn’t move and couldn’t speak and she thinks that lasted a couple of minutes.

“Mum got goosebumps and her hair standing on end when she told me what happened, she was really shaken up.

“Then suddenly I heard a man’s laugh. It was like the spirit found it hilarious that he had scared my mum.

“Next I heard low breaths that sounded like three low gasps, which was what mum heard the night she was pinned down.

“I think I angered him when I told him to leave as when I got out of the shower I noticed a mark like I had been grabbed or was really badly scratched on my bum.

“I couldn’t have bumped into anything as I would have remembered – I got undressed and went into the shower and when I got out I saw it there.”

The “attacks” were the last in a string of unusual experiences that left the Lewis’ desperately asking a psychic medium for help.

I saw a really tall, slender, bald man coming out of my mum’s bedroom, it was one of those things that stops you dead in your tracks

Leah recalled taps being turned on, strange noises upstairs that couldn’t be explained and one night she claims to have seen the spirit.

She said: “I got out of bed to get a drink, walked out of my bedroom and turned to the stairs where I saw a really tall, slender, bald man coming out of my mum’s bedroom.

“It was one of those things that stop you dead in your tracks. My mum was sleeping in her bed alone.

“I thought, ‘Oh!’ and after a while brushed it off and got a drink, I was tired and thought. ‘I’m not dealing with whatever that is.’”

‘It latched onto me’

Leah believes the spirit “latched” onto her and came to her family home after haunting her workplace in The Octagon Shopping Centre in Burton Upon Trent for several years.

Co-workers told her about other spooky moments prior to Leah having her first spiritual encounter around Christmas in 2018.

Leah said: “At first I was a bit sceptical and thought it could have been made-up but then I started seeing shadows when no one else was around.

“It wasn’t a scary experience but in a certain section of the warehouse you would feel really on edge and uneasy, it felt very uncomfortable.

“Then after the first lockdown, something flew off the shelves at me, which safe to say scared me quite a bit.”

In September last year, the family started experiencing unusual things at home – which they believe was due to the spirit following Leah home.

When I was pinned down it was very scary, I couldn’t shout for Leah and couldn’t get off the bed for two minutes

After “two physical encounters” with the spirit in June, mum-of-five Colette decided she had enough and reached out to those in the paranormal field for help.

Colette, a school lunch supervisor, told The Sun: “Leah got in touch with her spiritual side after my dad passed away last year and we’ve been that’s why the spirit attached himself to her.

“The man came home with my daughter and made himself quite comfortable within the family house.

“We were told he enjoyed the fact that we were a very female-oriented household as there’s no male figure.

“Then when I was pinned down it was very scary, I couldn’t shout for Leah and couldn’t get off the bed for two minutes.

“Then after the scratches and markings appeared on Leah I had enough, I was worried because things were getting worse and I knew I better get someone in.”

Ian Griffiths, a psychic medium with 23 years of experience, helped the family and identified their experiences as being down a “negative spirit”.

With the help of his spirit guide, he claimed to have “passed the spirit on” and later cleansed the family’s home with sage to prevent further bad experiences.

The 54-year-old, from Swadlincote, told The Sun: “I could picture a male spirit who was tall and thin, he didn’t have much hair on top and had a long grey coat with big boots.

“He could have been a factory worker, who had an accident and died – some spirits don’t know they are dead, others don’t want to leave and some want to be noticed.

Colette and Leah were lucky, it was good that they reached out when they did because things could have been thrown at them or much worse physical things

“There used to be an old steelworks near Leah’s workplace and the man looked like he was from the 19th Century, so he could have been from that time.

“He seemed angry and frustrated, he probably wanted help crossing over and when it didn’t happen he became more vicious.

“Colette and Leah were lucky, it was good that they reached out when they did because things could have been thrown at them or much worse physical things.

“Some can scratch you, push you and do things like holding you down, which is a horrible feeling because it seems to last for ages and is very frightening.”

Ian, who doesn’t charge for his assistance with paranormal matters, believes there “has been an increase” in reported experiences since lockdowns were put in place.

The carer said: “For a lot of people, I think the spirits have always been there but they have never noticed them before.

“But because a lot of people have been at home more and notice things, I do think it has increased and it has definitely picked up this last year or so.

“I’ve had texts asking for help but couldn’t go to their houses to do anything due to coronavirus guidelines but now lockdowns are off I can go out again.”

Since Ian’s intervention, Leah and Colette say they have not had any more paranormal experiences and feel the house is “calmer”.

Leah said: “Everything feels a lot nicer, I’m not angry at home and at work it’s completely different too as no one feels on edge.

“It’s all a lot calmer now and it’s kind of comforting to know he’s been passed over and hopefully is not as angry any more.”

Like with many stories about the paranormal world, the family understands there are some who could doubt their experiences.

But after two alleged physical attacks and several other eerie moments, they maintain they have no reason to lie and urge others with concerns to get external help.

Leah said: “All I’d say is that you will always be sceptical until you’ve experienced this yourself.

“At first I felt like I was going mad and doubted what I had seen but if anyone would have spent a night in our house when it was all kicking off they’d believe it too.

“There is no way to explain certain things our family went through and now I think it’s really hard for us to be sceptical now.” 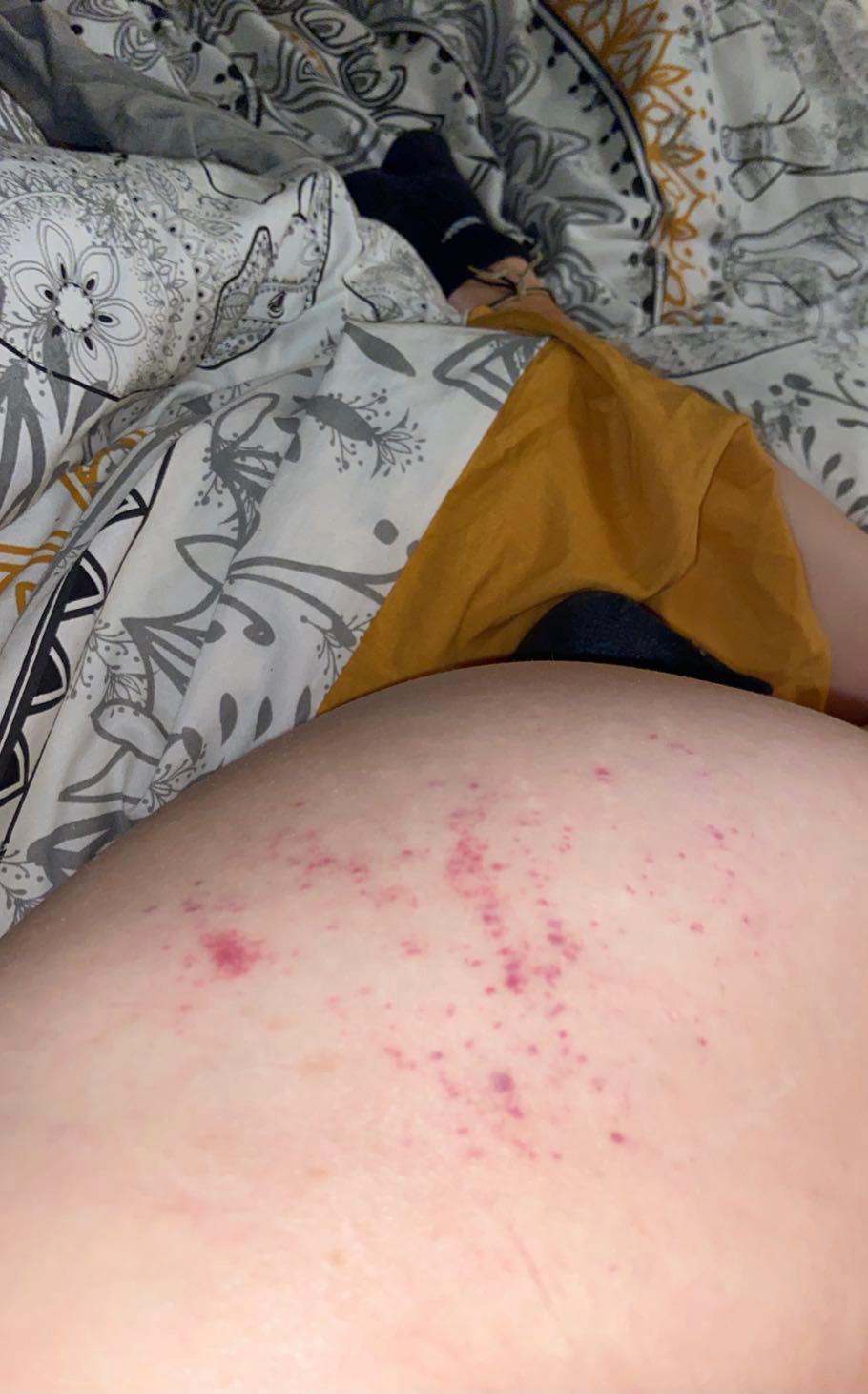 The unusual mark that appeared on Leah’s left bum cheek, which was believed to have been caused by an ‘angry’ spiritCredit: Collects 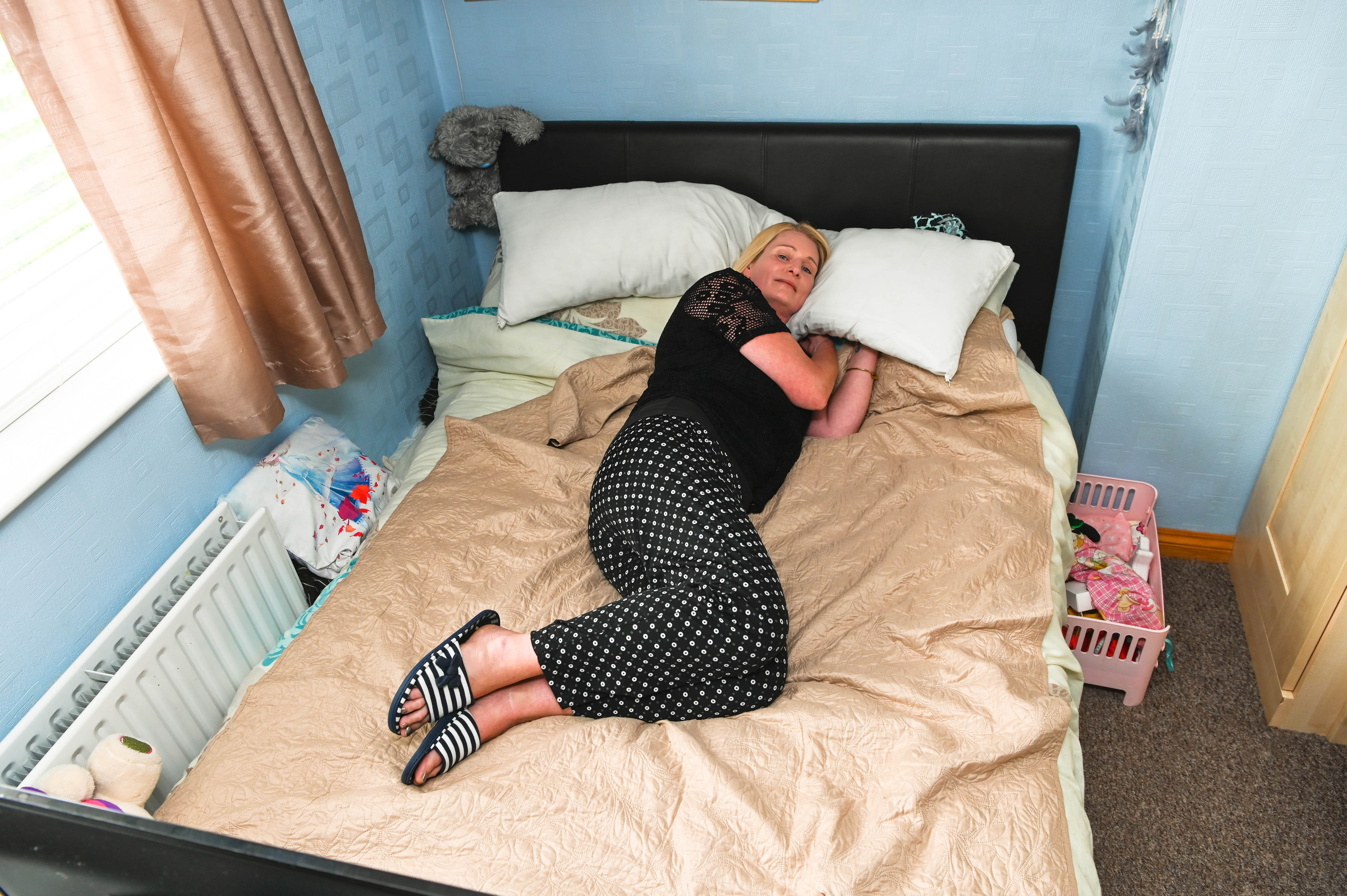 Colette claims she was pinned down on her bed by the spirit and was unable to move or talkCredit: @SnapperSK 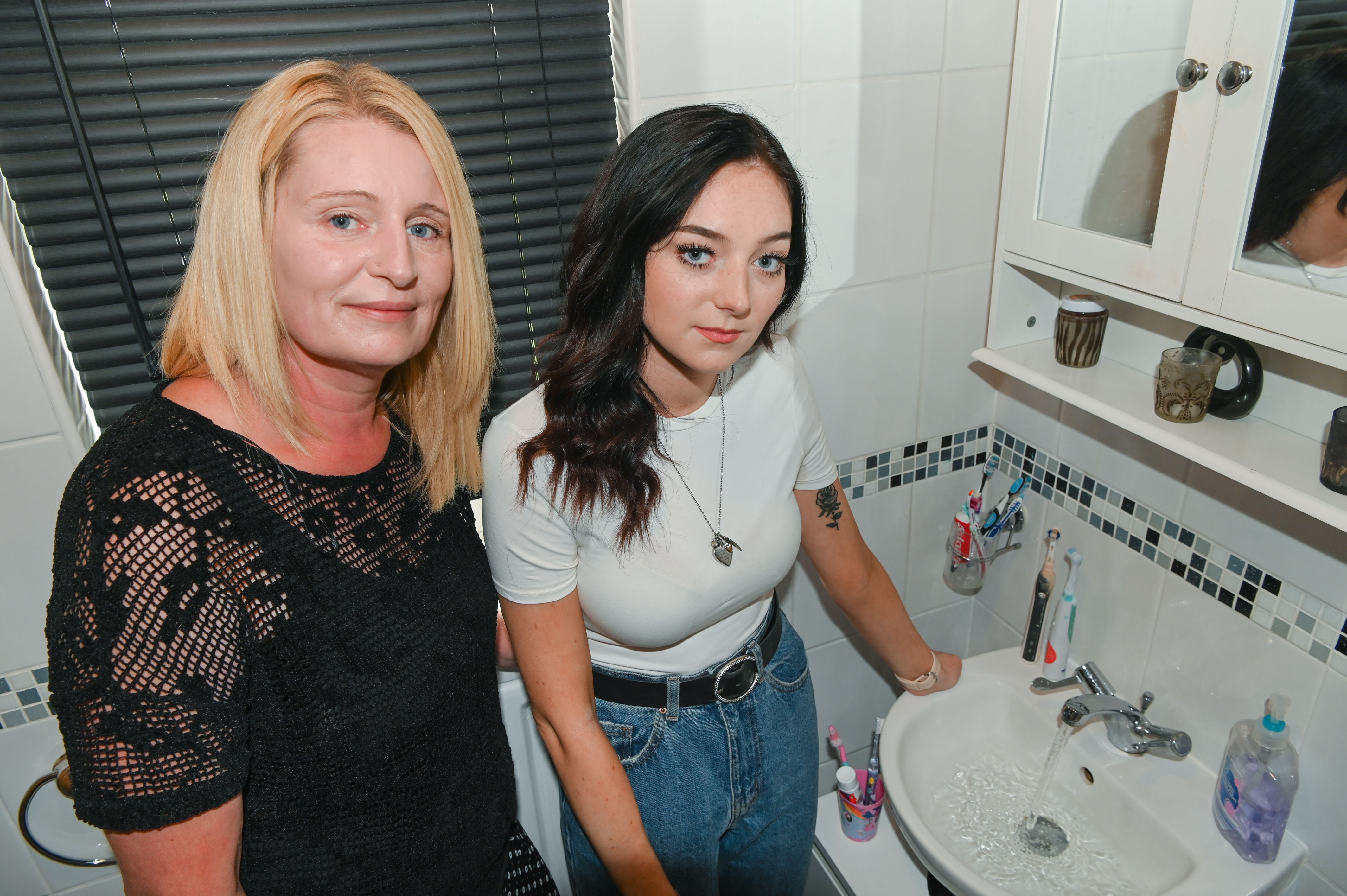 The haunting experiences started small with things like taps being left on and unusual noisesCredit: @SnapperSK 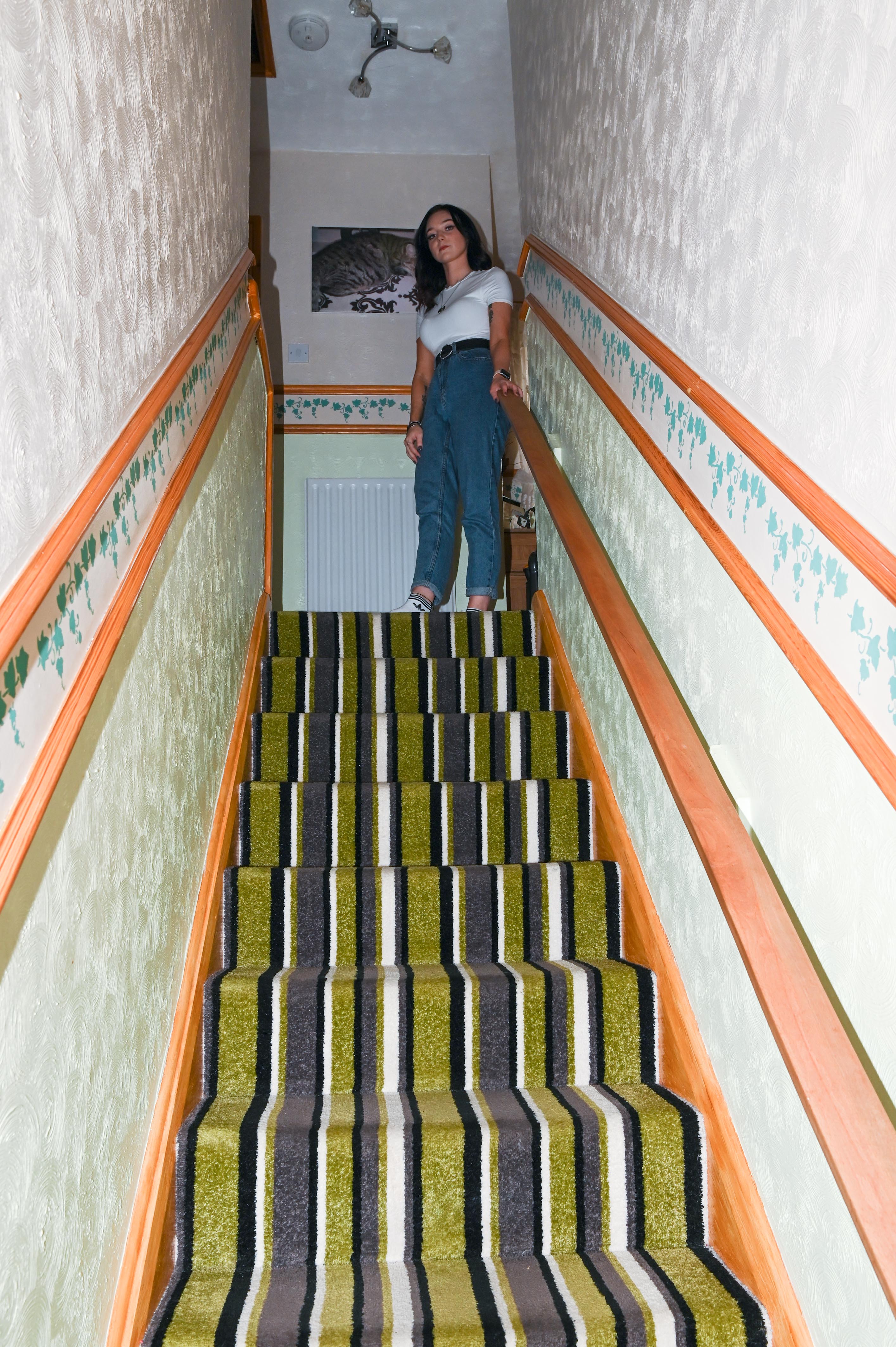 One night Leah spotted a ‘bald, tall’ figure at the top of the stairsCredit: @SnapperSK 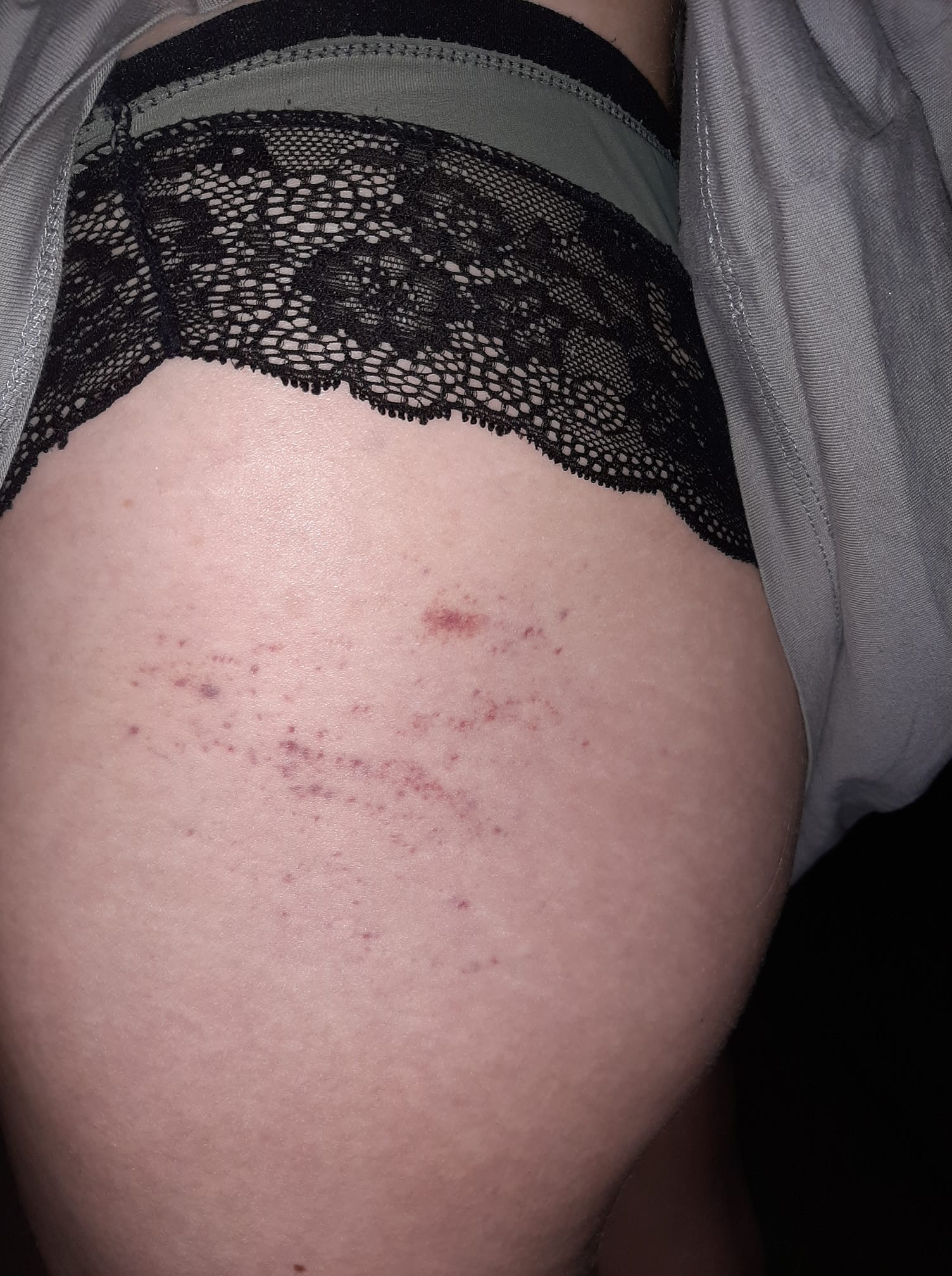 Leah noticed the bruise when she came out of the shower and has know idea how it happenedCredit: Collects 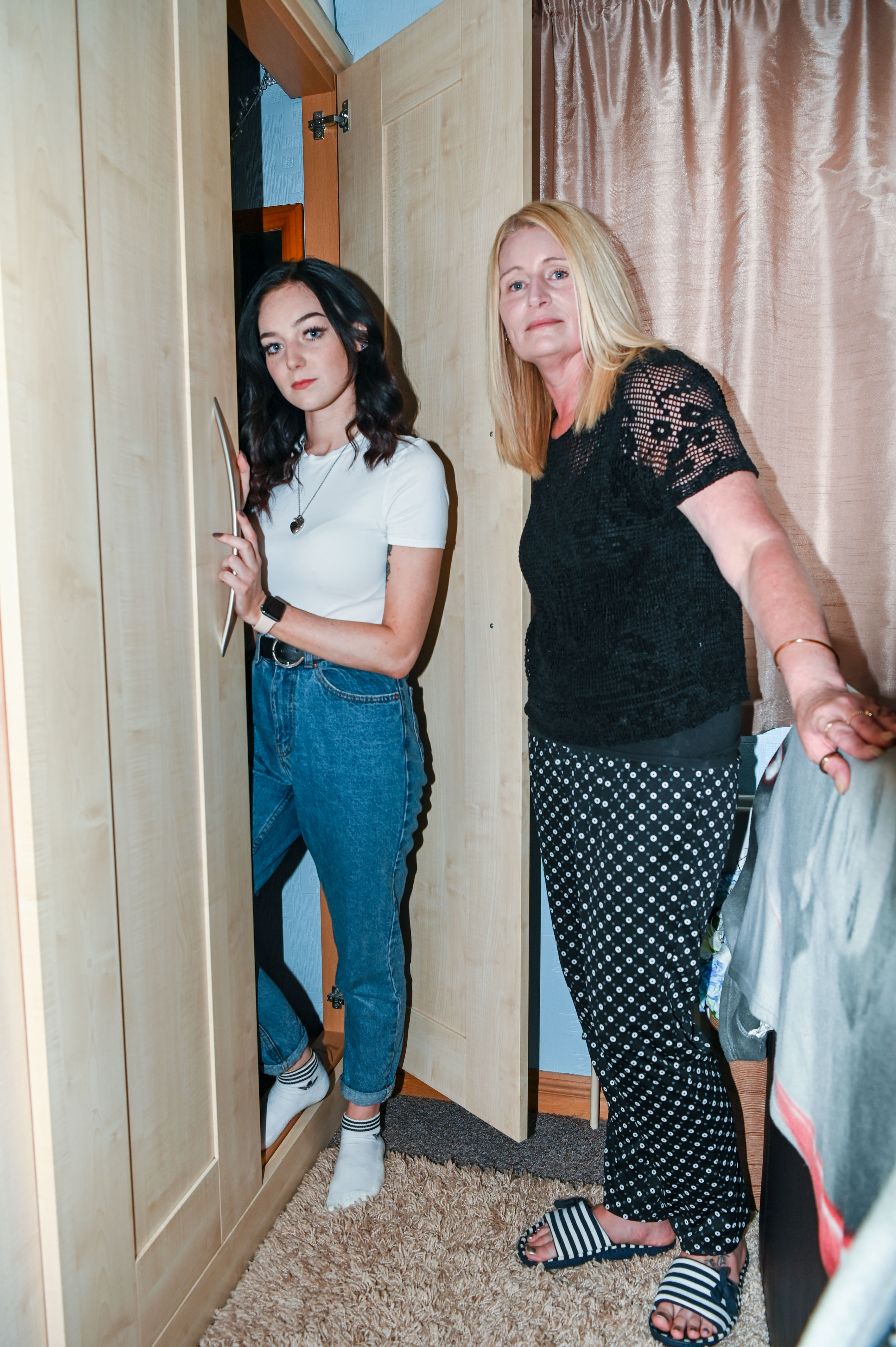 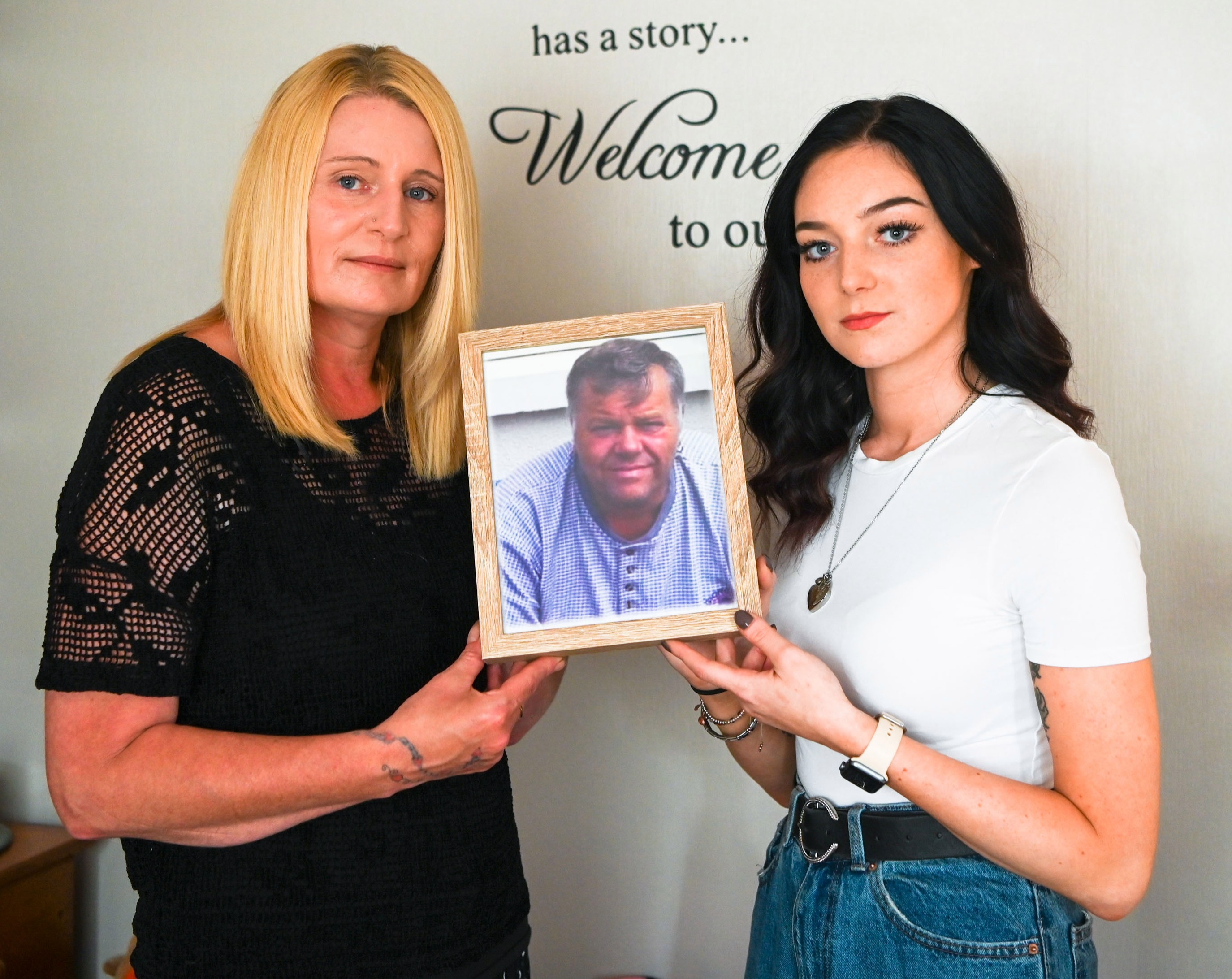 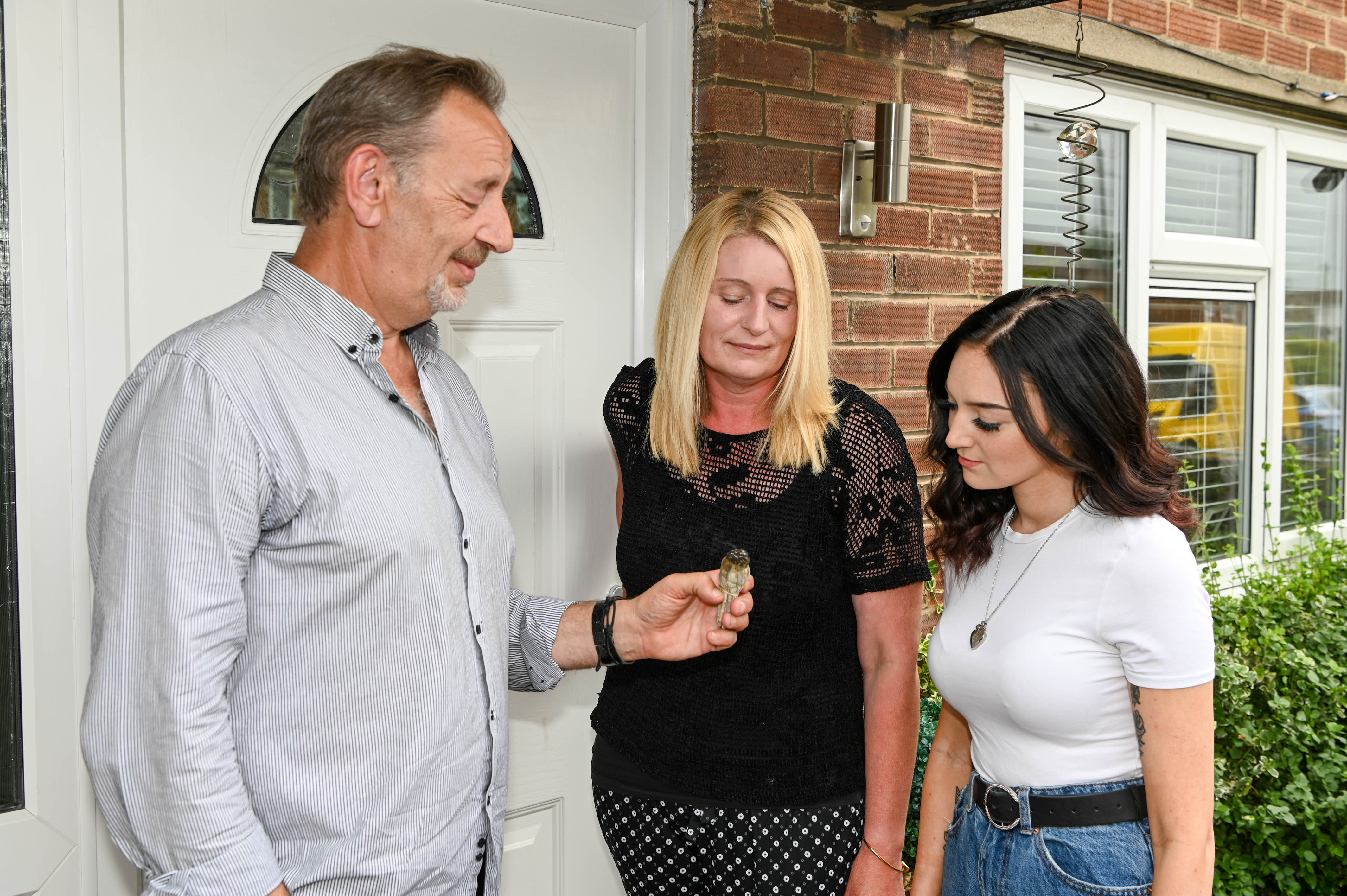