Lords voted to remove clause 57 of the bill, which restricts demonstrations which cause ‘serious disruption’ on Monday (Picture: NurPhoto/PA)

The UK Government has been defeated in the House of Lords this evening after peers voted to remove a controversial section of the Police, Crime, Sentencing and Courts Bill.

238 peers voted for the Labour-led amendment to remove clause 57 from the Bill, with only 171 members voting against.

Under the divisive legislation, a protest would be restricted if ‘noise generated by persons taking part in the procession may result in serious disruption’ to an organisation or individual ‘in the vicinity of the procession’.

The bill goes on to add that a protest is prohibited if it ‘may cause such persons to suffer serious unease, alarm or distress’.

Campaign groups such as Liberty and Greenpeace have spoken out against the creation of Serious Disruption Prevention Orders (SPDO), with the environmental organisation warning that the laws ‘don’t belong in a free and democratic society’.

‘Worryingly, you could be given a SPDO without actually having done anything disruptive – only that you “might” have caused serious disruption,’ they said. 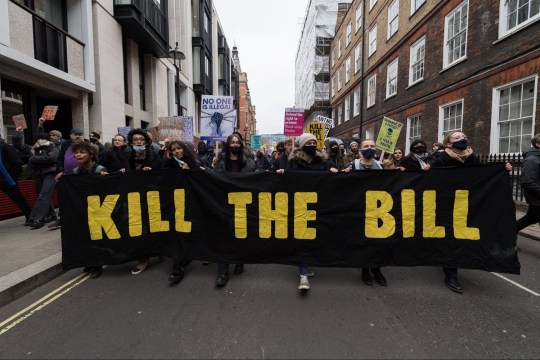 The Police, Crime, Sentencing and Courts Bill has attracted controversy from campaigning groups and activists, who have voiced their concern through the ‘Kill the Bill’ campaign (Picture: WIktor Szymanowicz/NurPhoto/REX/Shutterstock)

The amendment was one of several defeats for the government, after peers voted for a section of the bill placing restrictions on public processions to be scrapped.

Elsewhere, 242 lords voted to require police forces to record data on crimes motivated by the victim’s sex or gender, compared to just 185 against.

Measures to introduce a review into the prevalence of drink ‘spiking’ were also supported by peers, as well as the police having a statutory ‘duty of candour’.

The proposal, dubbed the ‘Hillsborough amendment’, requires officers to ‘act at all times in the public interest and with transparency, candour and frankness and to assist in court proceedings, official inquiries and investigations’. 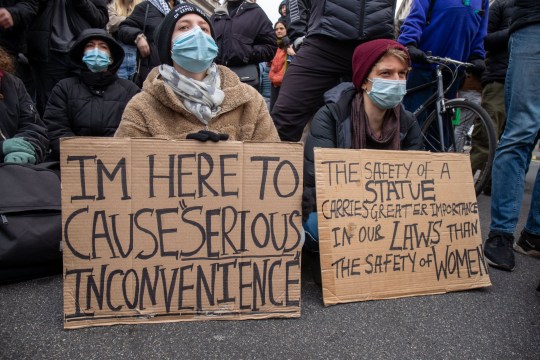 Under clause 57, a protest can be restricted if it causes a person to suffer ‘serious unease, alarm or distress’ (Picture: Lucy North/MI News/NurPhoto)

‘Kill the Bill’ protestors drummed outside Parliament as lords debated the bill, with the noise being heard by those inside the chamber.

Speaking during the debate, Labour frontbencher Lord Coaker said: ‘The right to protest in this country has never, ever had to have a condition placed upon it which is about noise.

“I believe that making a noise is a fundamental part of the freedom to protest properly in a democracy.’

Former cabinet minister Lord Hain, a leading anti-apartheid campaigner, added: ‘This Bill, in my view, represents the biggest threat to the right to dissent and non-violent protest in my lifetime. It’s deeply reactionary. 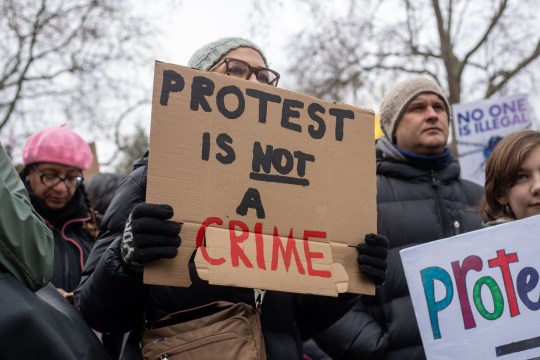 The Home Office has stressed that the bill ‘in no way’ changes the right to protest (Picture: MI News/NurPhoto/REX/Shutterstock)

‘It’s an authoritarian attack on the fundamental liberties of our citizens.’

‘They are plain nasty and they really have to go,’ she said.

Yvette Cooper MP, the shadow home secretary, said of the policing bill: ‘[It] should have been an opportunity to tackle violence against women, improve support for victims of crime and keep communities safe. 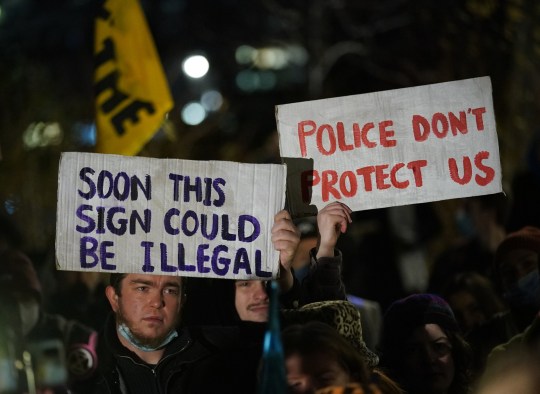 Campaigners gathered outside parliament on Monday to protest the proposed legislation, with the sound of drumming being heard by peers inside the chamber (Picture: PA)

‘The government’s priority has been to use the bill to bring in rushed powers that are incredibly widely-drawn – for example, allowing the police to stop and search anyone in the vicinity of a protest, including passersby, people on the way to work, and peaceful protestors.

‘Instead of seeking headlines and stoking division, the Conservatives should implement Labour’s plans to keep the public safe.’

However, a Home Office spokesperson stressed that the policing bill ‘in no way’ changes the right to protest.

‘We have seen some of the most self-defeating and dangerous protests in recent years with people gluing themselves to motorways, causing serious disruption to the law-abiding majority across the country and tearing police away from communities that need them most.

‘That’s why our police, crime, sentencing and courts bill is so necessary – it gives police the power to proactively prevent this kind of chaos before it ensues, and focuses on a selfish minority of relentless reoffenders,’ they said.

Peers are continuing to vote on the amendments to the bill this evening, as part of the bill’s report stage in the House of Lords.

The amended bill will then return to the Commons for further debate, as part of a back-and-forth known as ‘ping-pong’.