A MUM has been left paralysed from a stroke after she was stuck in traffic caused by M25 eco-protesters for six hours.

Her son, who was driving her to the hospital, said he was forced to “watch his mother slip away”. 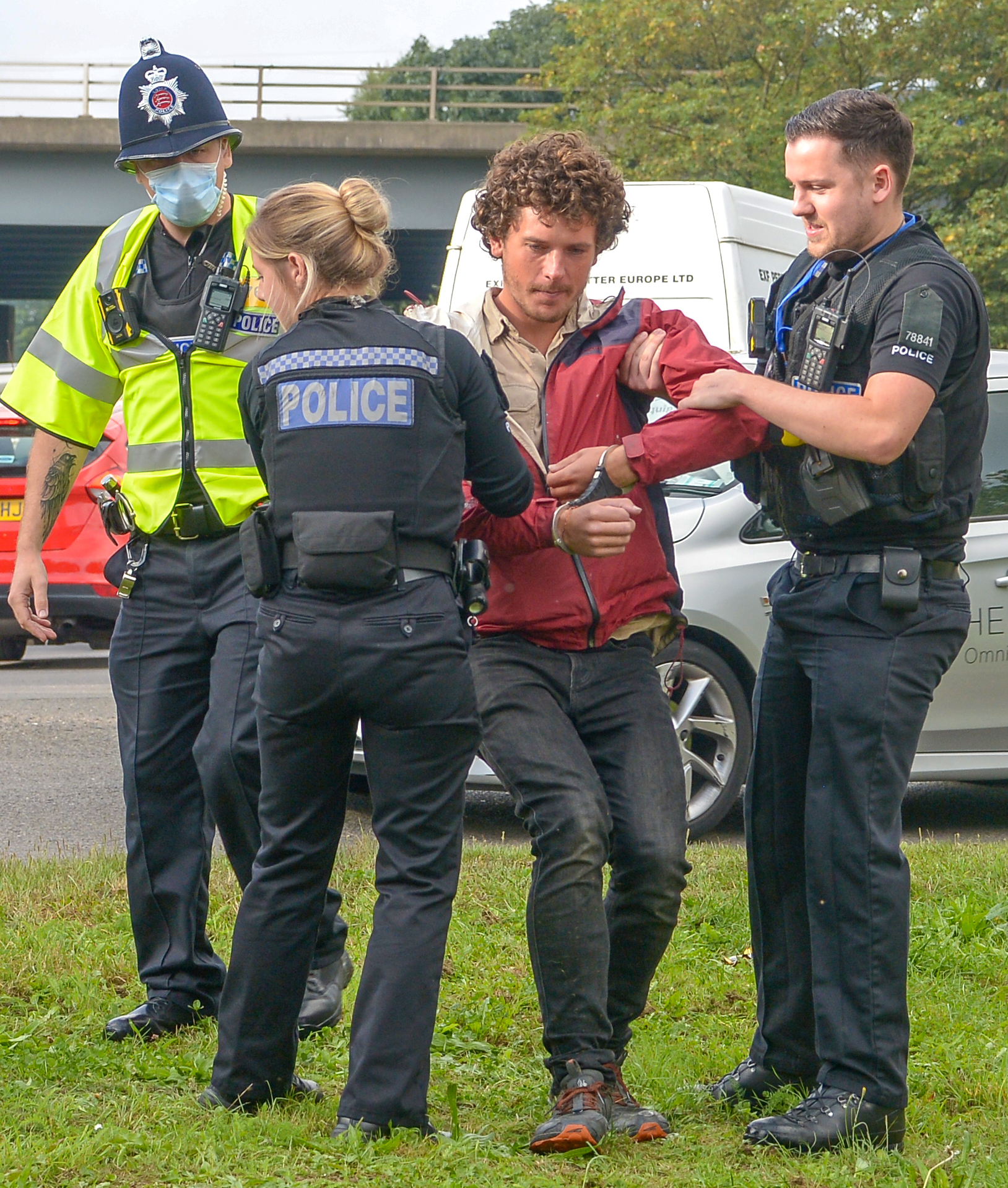 Some protesters were arrested and pulled away from the busy roadCredit: ROB WELHAM / McLELLAN

“I was caught up for about six hours in traffic. I was doing a mission of mercy to help my mother,” Chris told LBC’s Andrew Pierce.

He took it upon himself to drive his mum because of ambulance delays and the on-site doctor being his with severe delays due to traffic.

But he ended up stuck on the motorway for six hours after Insulate Britain protesters blocked the road.

“I was there with my mother for six hours watching her slip away, and I could do nothing.”

“When we got her to the hospital, the doctors said if we were to have gotten to them within 90 minutes, her symptoms, her recovery would have been minimal.”

“Because she’d been left to endure a stroke for six hours she’s got complete paralysis now down her left side” he told Andrew.

“I am so angry and so upset – this didn’t need to happen”, the caller concluded.

Activists dressed in hi-vis – who have already been arrested and released twice since Monday – targeted Junction 3 at Swanley in Kent shortly after 8.30am yesterday.

They plonked themselves in the middle of the tarmac and tailbacks quickly formed.

Several furious drivers lost their patience, with one man in a white van yelling: “Go to work you lazy b******s.”

Another man, a contractor for DX Logistics which delivers medical supplies, said: “We’re fuming about this. The van stuck in traffic here is carrying ventilators, drips, everything.

“This protest is p***ing us off. We can’t get any medical supplies out to the hospitals, which should have arrived by now. It’s ridiculous, it’s wrong. We are livid.”

Police were in position ready to swarm, and were later pictured hauling the environmentalists off the road – but the group actually thanked them.

Sandy, 31, who works as a teacher, told The Sun Online: “On Monday and Wednesday there was a lot of screaming at us from motorists. Today, we’re well protected by the police and there’s less opportunity for it.”

She added that today was the third time she had been arrested this week – but she will keep returning to shut down the M25.

“I feel calm. It’s out of my hands now. If I’m released, I will come back here,” she said.

“Losing my job is a small concern compared to what’s coming if we don’t lower our carbon emissions.”

Fourteen activists were swiftly dragged off the road and carted off by cops.

But one protester, Cathy, a mum of two, remained glued to the road.

She said: “I’m really scared. I don’t want to be doing this, I’m doing this for my children.

“I’m only doing this because I’m desperate.”

The group are demanding the government insulate all homes in Britain by 2025, starting with social housing. 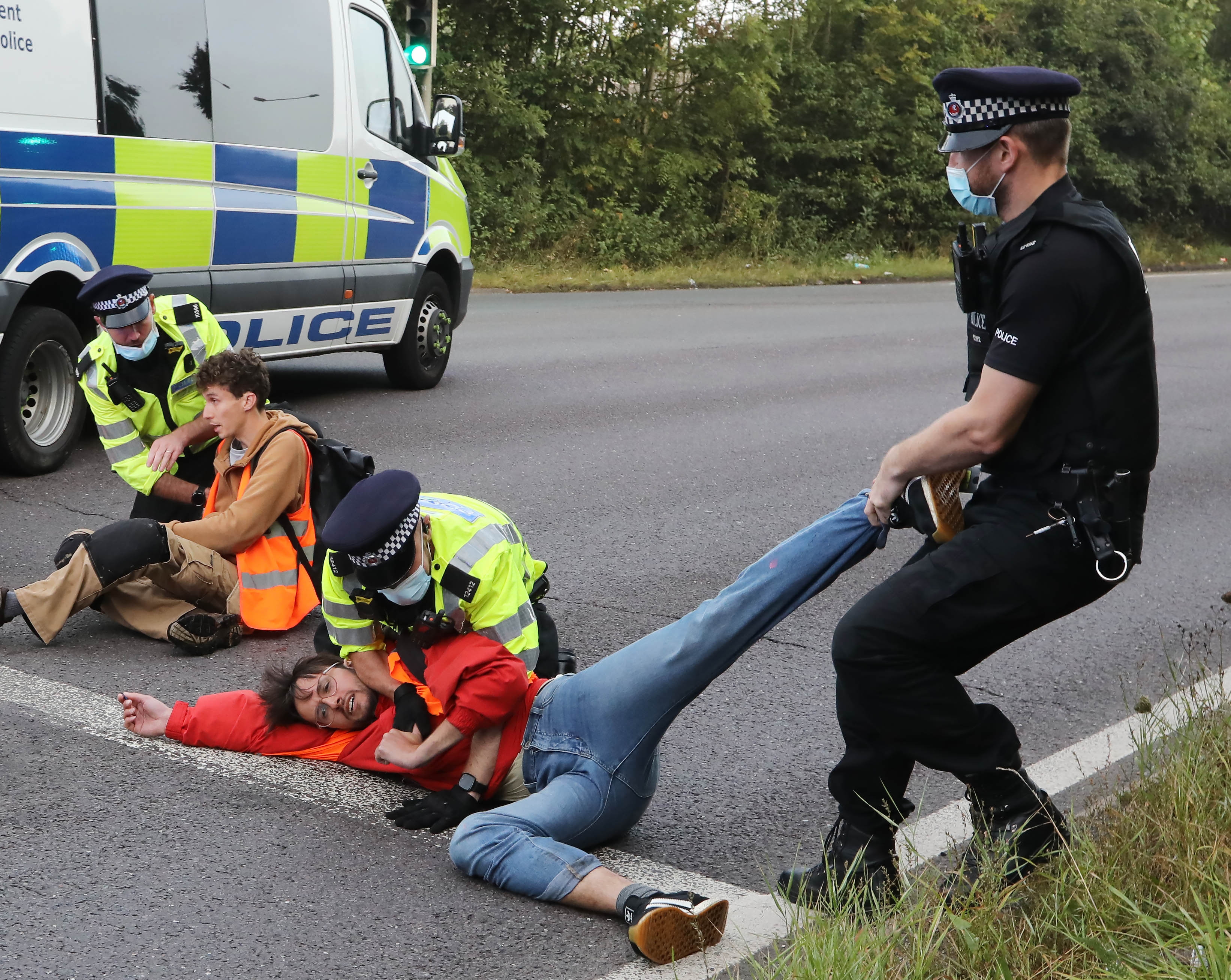