Boris Johnson’s government has previously ruled out relying on recruiting foreign labour to address the shortage but has been forced into action after panic buying spread (Picture: PA/Twitter)

Panic buying is continuing across Britain as the government gets set to draft in 5,000 foreign drivers to ease the crisis.

More long queues at filling stations have reported at various locations and images of people filling cans with petrol have emerged on social media.

Boris Johnson’s government is set to U-turn on its earlier insistence it would rely on training domestic workers to fix the HGV driver crisis, which is causing disruption across the economy.

A group representing British retail warned Christmas would be affected unless ministers got to grips with the problem in the next 10 days.

Visa rules are set to be relaxed for drivers, as well as for food processing employees, another industry suffering from acute staff shortages.

Ministers met to discuss the emergency measures on Friday and Downing Street said any move would be ‘very strictly time-limited’.

HGV drivers will be temporarily added to the ‘shortage occupations lists’, professions where visas can be more easily obtained in order to tackle labour deficits, as previously reported.

The 5,000 drivers figure reported by The Telegraph is well short of the 100,000 drivers the Road Haulage Association say the country is in need of but the government will hope the smaller influx of workers will help keep critical supply chains moving. 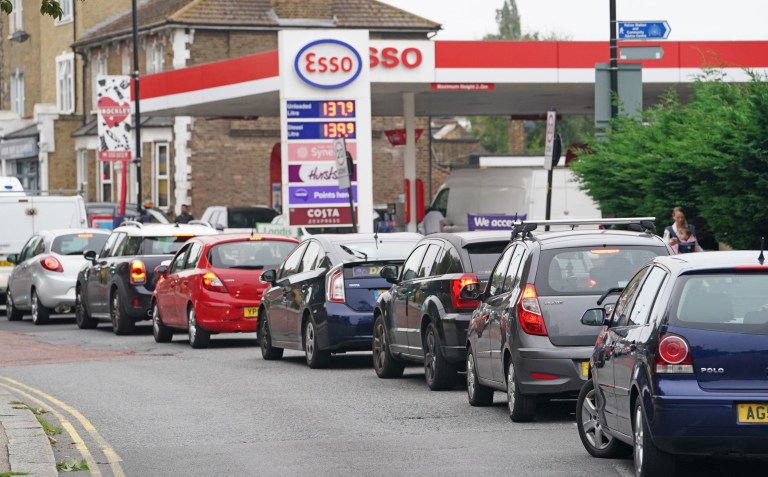 Long lines at petrol stations are once again being reported at various locations (Picture: i-Images) 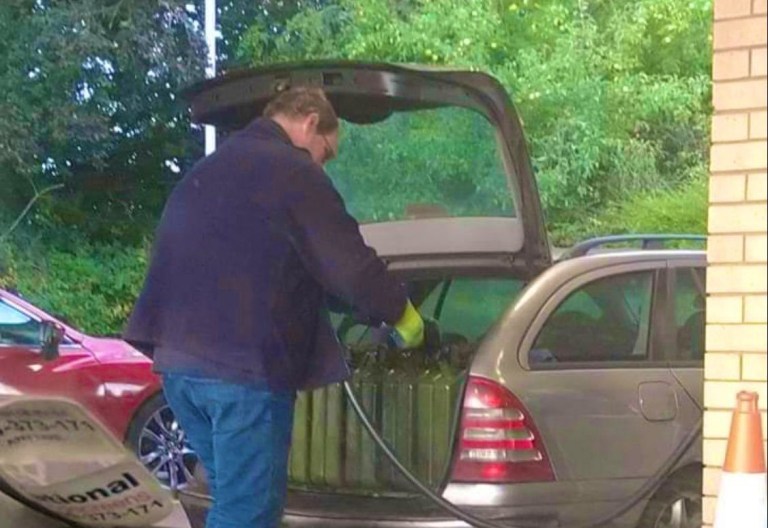 Motorists have been spotted dangerously filling jerry cans with petrol despite shortages not being widespread (Picture: Twitter/@BoxingWorldUk) 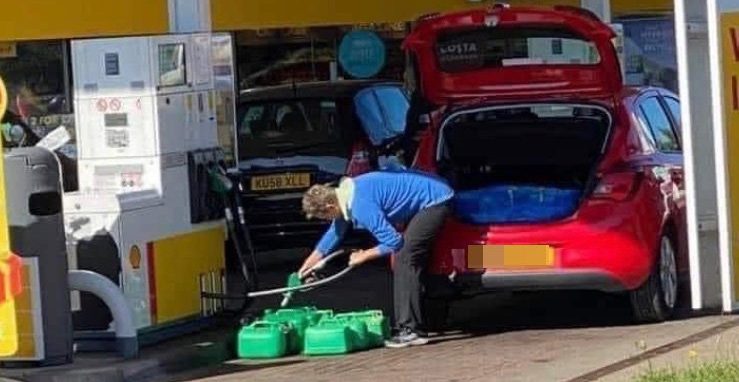 Under the law, it is illegal to store more than 30 litres of petrol at home (Picture: Twitter/@nicktolhurst) 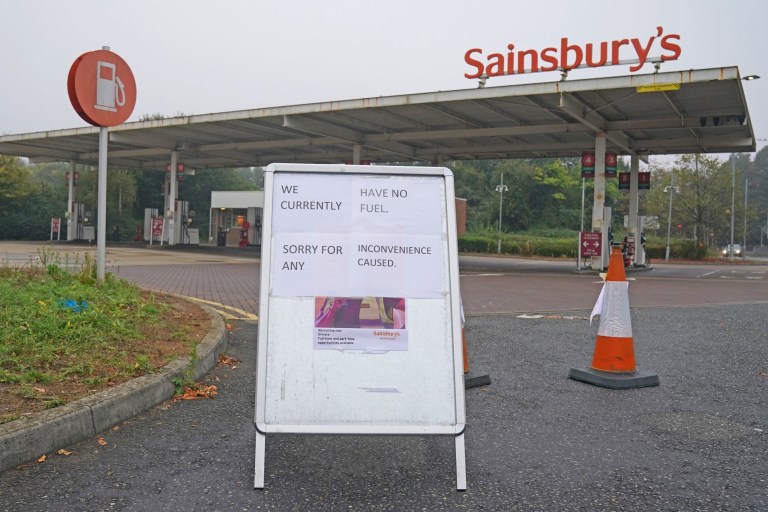 The prime minister and transport secretary have previously resisted industry calls for visa rules to be relaxed, with Grant Shapps saying as recently as yesterday morning that seeking to ‘undercut’ the problem ‘with cheaper European drivers’ wouldn’t fix the issue long-term.

It’s unclear if the move will take effect early enough to prevent disruption over the busy Christmas period, a government source told The Independent.

Panic buying spread across the country on Friday after BP said around 20 of its 1,200 petrol forecourts were closed due to a lack of available fuel, with between 50 and 100 sites affected by the loss of at least one grade of fuel.

A ‘small number’ of Tesco refilling stations have also been impacted, said Esso owner ExxonMobil, which runs the sites.

And on Friday the EG Group, which has around 400 petrol stations in the UK, said it was imposing a £30 limit on customers ‘due to the current unprecedented customer demand for fuel’.

Mr Shapps said long-running recruitment problems and labour market changes caused by Covid-19 were to blame for the shortages, denying Brexit has played a role. 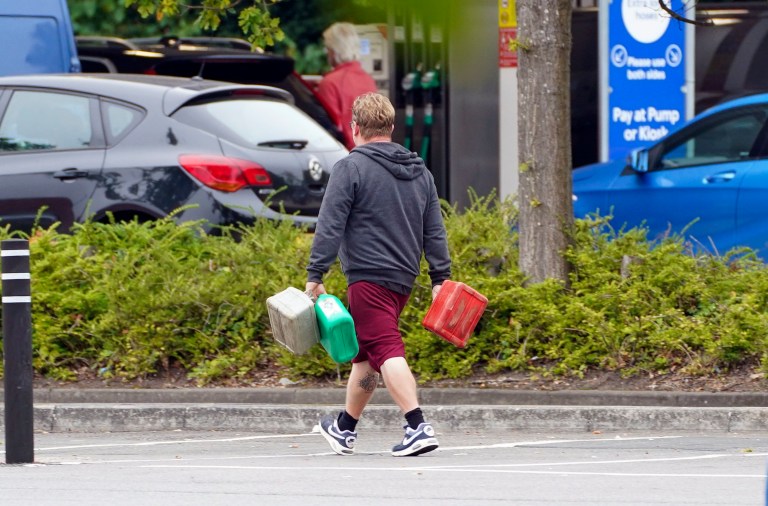 The government is set to bring in temporary measures to boost driver numbers to prevent images like this (Picture: PA) 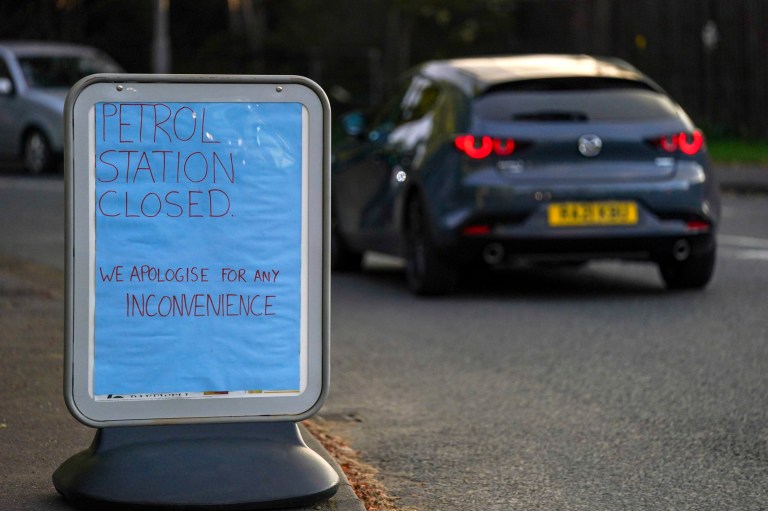 Industry bosses in the retail and haulage sectors have been calling for visa rules to be relaxed for months (Picture: PA) 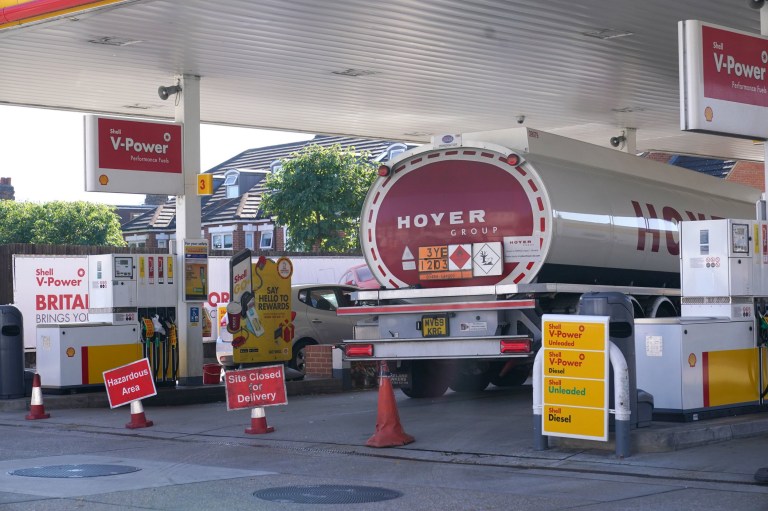 The UK does not have a shortage of fuel – it just doesn’t have sufficient drivers to transport it (Picture: PA)

He also refused to rule out the prospect of the military being called on to transport critical stock.

The director general of the Confederation of British Industry (CBI) called the expected announcement on visas a ‘huge relief’.

Tony Danker told BBC Breakfast: ‘We’ve been calling for it for three months we could see this problem coming and more problems coming, and so it’s a shame the government needed queues at the pumps to move, but move I hope they have and it will help.’

A Downing Street spokesperson said: ‘We have ample fuel stocks in this country and the public should be reassured there are no shortages.

‘But like countries around the world we are suffering from a temporary Covid-related shortage of drivers needed to move supplies around the country.

‘We’re looking at temporary measures to avoid any immediate problems, but any measures we introduce will be very strictly time-limited.

‘We are moving to a high-wage, high-skilled economy and businesses will need to adapt with more investment in recruitment and training to provide long-term resilience.’