Crystal Ward, 27, had already been banned from driving (Picture: Cavendish)

A mum who crashed at 88mph on a motorway slip road while high on cannabis and using Snapchat at the wheel has been spared jail as it would ‘impact’ her children.

Crystal Ward, 27, had already been banned from driving but decided to ignore it and travel along the M60 near Sale, Greater Manchester.

She made a series of eight second video clips from her VW Golf, one of which shows a passenger pleading ‘Babe!’ before the crash, which led to her hitting a barrier with such force that the engine was hurled out of the vehicle into the main carriageway where it was hit by another car.

Ward, who was not wearing a seatbelt, was also ejected from the vehicle and suffered spinal injuries while Hamzah Ahmed, the father of one of her children, was trapped in the wreckage.

Tests showed she was four times the drug driving limit for cannabis. She was serving a 40 month ban for a previous drink and drug driving conviction.

Police recovered the video, taken at around 1.45am on June 11 last year, when officers examined her phone. 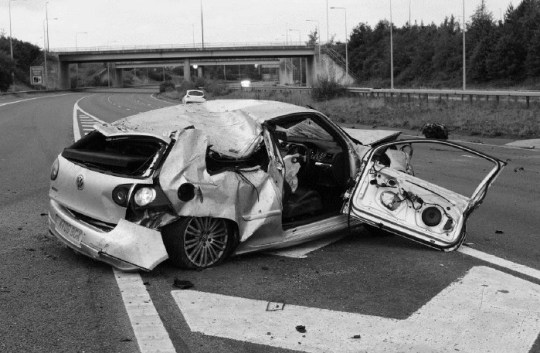 The aftermath of the crash (Picture: Cavendish)

At Minshull Street Crown Court, Ward, from Bradford, faced jail after she admitted drug driving, driving whilst disqualified and having no insurance but wept as she was given 12 months jail suspended for two years after pleading her children would be affected by her going to prison.

The youngsters are currently in the care of their paternal grandparents.

Peter Connick prosecuting said: ‘Whilst she was driving, she was using one hand to hold her mobile phone, recording a video. In the footage, the speedometer shows a speed of 88mph being reached, before the recording cuts off.

‘She showed a deliberate disregard for the safety of others. She has driven at excess speed, was on a mobile phone and it was a high-speed collision involving herself and others. It’s fortunate there was nothing more than a punctured tyre in regard to the other motorist and there was a serious risk of injury both to herself and her passenger.’

She had a string of previous motoring convictions including drink driving in 2018, driving whilst disqualified later that same year, and drink and driving in 2019.

In mitigation defence counsel Sarah Johnston said her client spent 12 weeks in hospital and was being assessed for PTSD. 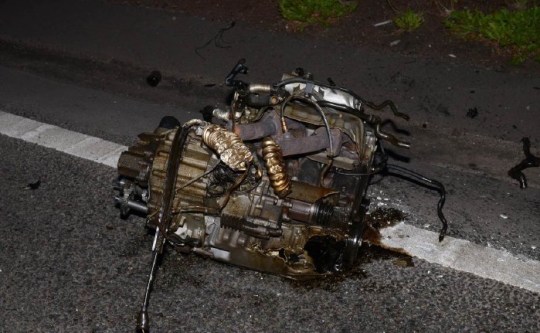 The engine of the VW on the motorway after the crash (Picture: Cavendish)

Ms Johnston added: ‘She finds it difficult to confront herself and her appalling decision making on this particular occasion.

‘She was thrown from the vehicle, suggesting she wasn’t wearing a seat belt and sustained fractures, herself, to the top of her spine, the consequences of which are still ongoing. She requires further surgery for some of the metal plates in the base of her neck to be removed.

‘She is a mother of three children. The children are subject to a special guardianship order in favour of their paternal grandparents.

‘There have been ongoing concerns about her vulnerability throughout her life but she still sees her children regularly and is allowed to visit them. The prospect of custody and the impact of that on them weighs heavily upon her. She sees her children four times a month and there is an opportunity to extend the visits.

‘Her passenger does support her and he is the father of her child. He was driving initially and they then stopped. She can’t recall the circumstances in which she came to be driving on that particular occasion.

‘If this defendant hasn’t learnt her lesson from this set of circumstances, then frankly, no one ever would.’

Sentencing, judge Mr Recorder Jon Close told Ward: ‘You are not going to prison today but it was a very, very close thing.

‘The impact must have been ferocious and it was through good luck that nobody else was seriously injured. Fortunately, the driver of the passing Peugeot wasn’t injured. If he had been, you would have been facing far more serious charges.

‘You said you want help, and I hope you get it. If not, a jail sentence is waiting for you.’

Ward was also ordered to wear an electronic tag for three months as part of 9pm-7am curfew. She was disqualified from driving for another five years and ordered to take an extended re-test.