Lorry drivers, business owners and even ordinary residents are being targeted by thieves pouncing on petrol and diesel supplies – armed with gas-guzzling machinery and even deadly weapons. 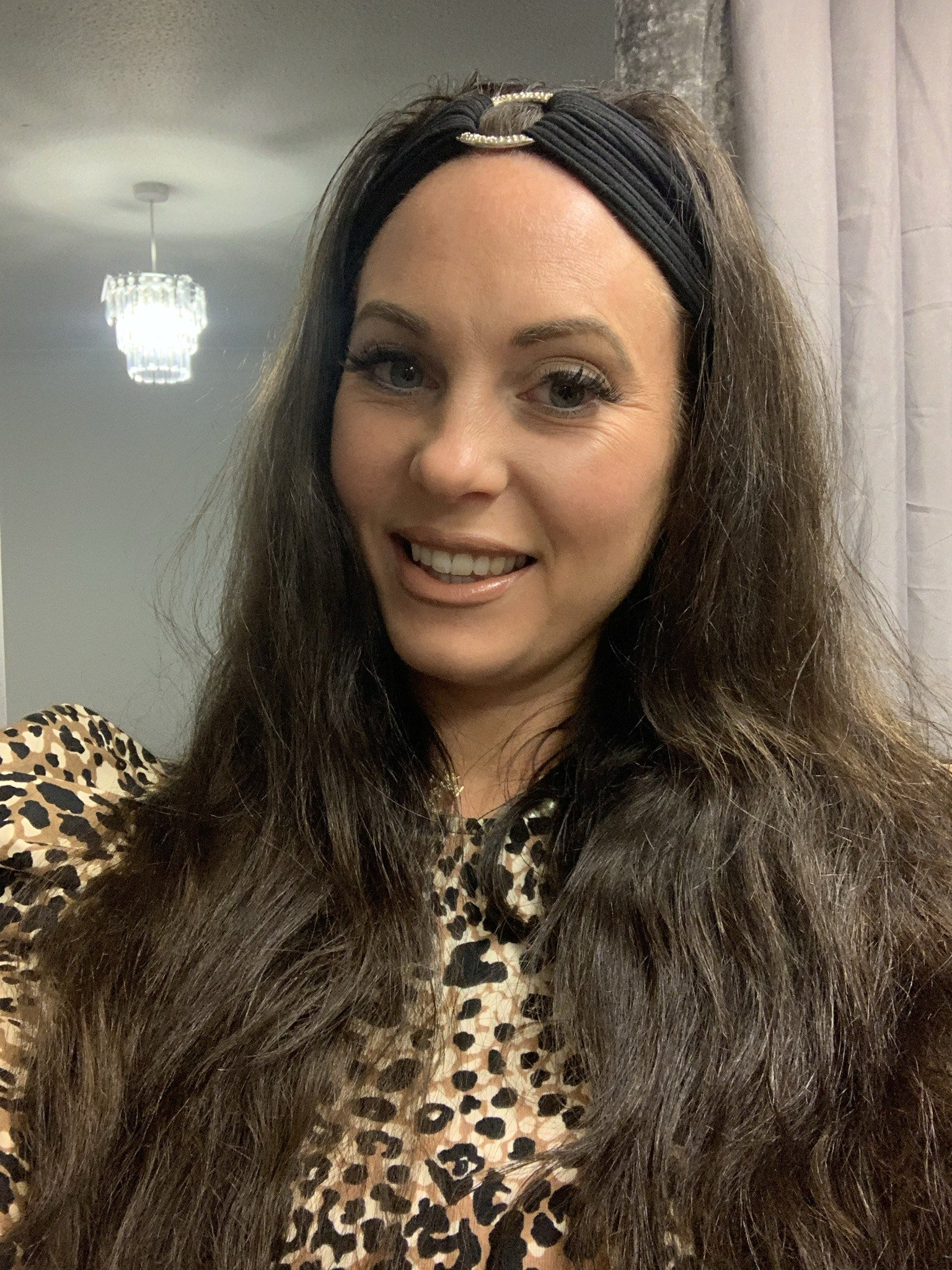 Jenni Turner had £50 of petrol stolen from her car after boasting about it onlineCredit: SWNS

The Sun has been told of HGV drivers being held at knifepoint, axed in the knee and gassed into unconsciousness by ‘fuel fairies’ hoping to flog it illegally.

Terrified haulage bosses say they are being hit in the middle of the night while they sleep, and fear “it’s only a matter of time” before someone is killed.

The desperate scenes – which come as Rishi Sunak announces plans to tackle the fuel crisis – are reminiscent of the post-apocalyptic blockbuster Mad Max, where survivors fight one another in a deadly scramble for gasoline.

Even unsuspecting homeowners claim they have been left freezing after crooks made off with oil used to heat their boiler, while chancers are targeting unsuspecting mums after they have filled up their car tanks. 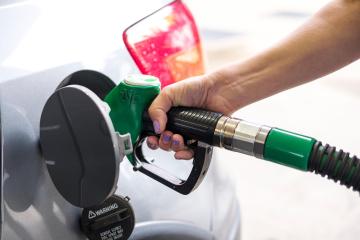 Chris Sull, who’s been a lorry driver for more than three decades, has had his diesel nicked twice in recent years and once had to confront a thief.

The 60-year-old, from Chepstow, South Wales, told The Sun: “Trying to stop them is dangerous as nine out of 10 will be tooled up. You could get stabbed or clobbed around the head with an iron bar.

“These gangs aren’t afraid to take a weapon to you and even though you’re told not to stop them, it’s hard because it feels like a violation, like someone has broken into your house.

“Once I found a guy I knew lying on the bed with his truck doors open. He had been knocked unconscious after having laughing gas fed through the vents and everything was gone.

“It’s a major crime now, it’s not a petty crime anymore. Organised gangs must be doing this on a par with drugs due to the amount of fuel that’s being taken and how much it costs.

“Driving used to be a nice job but in the last 15 years it’s got steadily worse and you’re left feeling angry because all you get from the police is a crime number.” 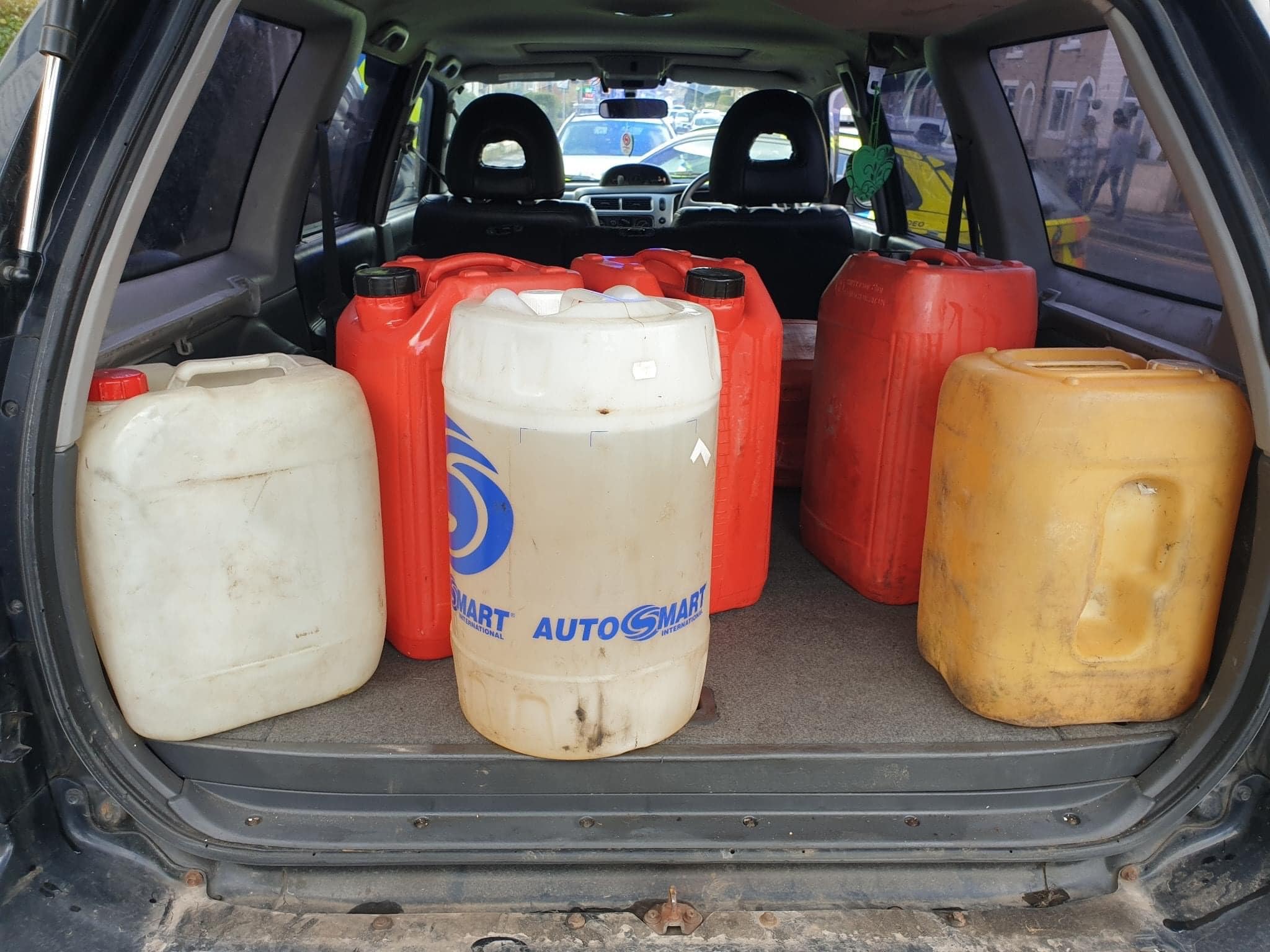 Police managed to catch one car that had stolen fuel in LancashireCredit: Lancashire Road Police 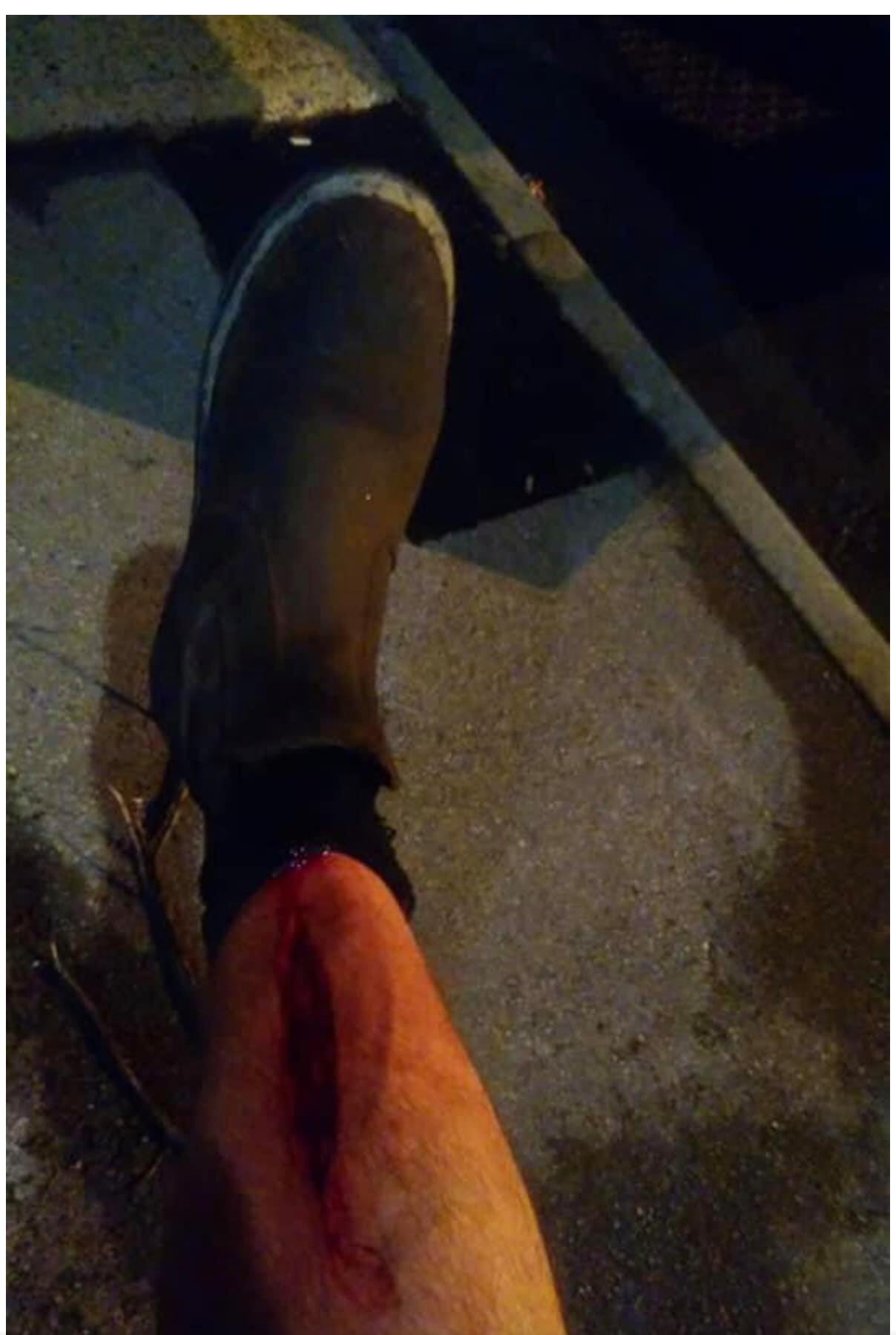 One driver reported being attacked with an axe, leaving a shocking woundCredit: Supplied

Fuel continues to be the most stolen commodity in freight and cargo crime, accounting for 1,067 reported offences last year and an estimated £2.2million in losses.

Experts believe those figures from the National Vehicle Crime Intelligence Service (NaVCIS) are a gross underestimation because many people don’t report the crimes.

In January, fuel theft accounted for 34 per cent of all reported cargo based crimes with up to four incidents every day, compared to two a day in 2020.

Chris Day, from Stoke-on-Trent, the managing director of Fuel Theft Solutions Ltd, believes “it’s only going to get worse” as fuel prices rise at the pumps.

He told The Sun: “There’s a market for it and it’s lucrative. If someone sells fuel for 110p or 120p all day long they can make a lot of money. It’s liquid gold.”

Mr Day set up a Facebook group two years ago to reveal the scale of the problems in the industry and has heard countless horror stories from encounters with ‘fuel fairies’.

He said: “Organised crime gangs are ruthless. We hear reports of gassing, a man who had an axe slammed into his leg when he challenged robbers and others have had knives pulled on them.”

These crimes typically happen at night when drivers sleep and occur in both paid-for services, which cost up to £50 per stay, and “riskier” off-the-road laybys.

Barry Shipp, who runs B S Haulage, doesn’t believe “either are safe now” and claims drivers are always “semiconscious and listening for intruders”.

He said: “One guy had a knife held to his throat… I’ve moved my lorries to day work only before one of us gets killed. It’s only a matter of time.” 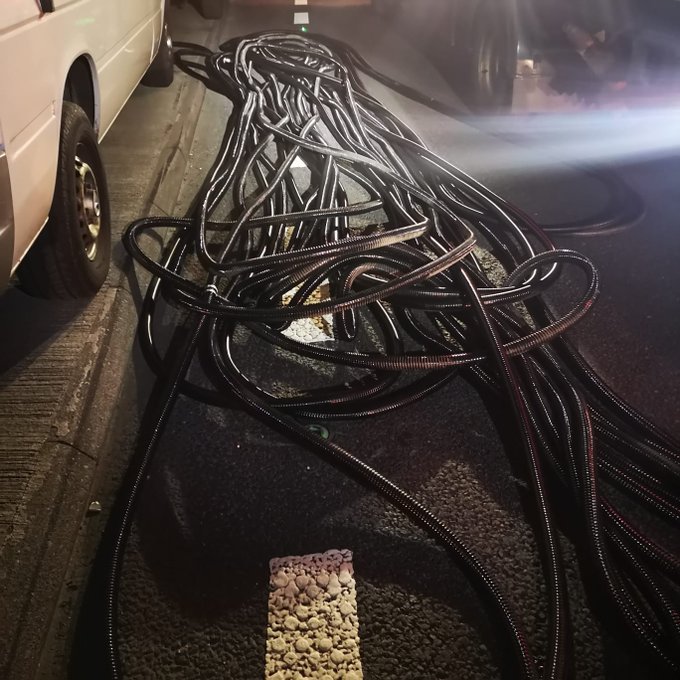 Gangs used pipes that can stretch half a mile away when robbing HGVsCredit: Supplied 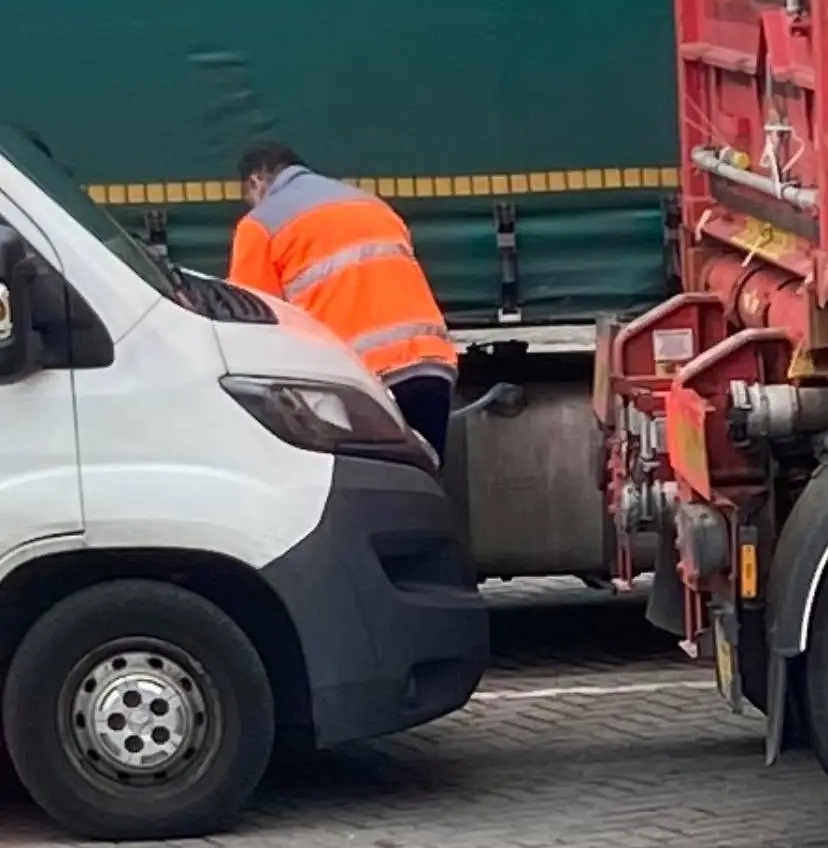 But it’s not just drivers who are at risk, it’s households and businesses too.

Norfolk resident Jenni Hannant claimed thieves stole up to 500 litres from an oil tank, which was secured behind a padlocked gate, that she used to fuel her boiler.

“I’ve never had oil stolen before,” she told The Telegraph. “It will probably be stolen to order.”

Meanwhile Hollie Hamilton, in Denbighshire, North Wales, was left “hypothermic” after 500 litres of oil was stolen from her home two weeks ago.

Last year, one mum who bragged about her full tank of petrol to her neighbours revealed she had £50 worth of fuel stolen.

Jenni Turner, 34, from Erith, south east London, filled up her tank the day before it was nicked and had bragged about her steady supply to one of her neighbours.

She then discovered two holes – the size of a five pence piece – had been drilled through the petrol tank to swipe her highly sought-after fuel.

One farmer, from County Durham, told The Sun that thieves stole 10,000 litres from his fuel tank two weeks ago.

He added: “That fuel cost me £7,500 and I’ve not been able to claim it on my insurance because they said the yard wasn’t secure, I was on holiday and that was my fault.”

The 36-year-old said he’s “close to not being able to run machinery”, which would lead to the closure of his farm because there’s such a “heavy tax on fuel”. 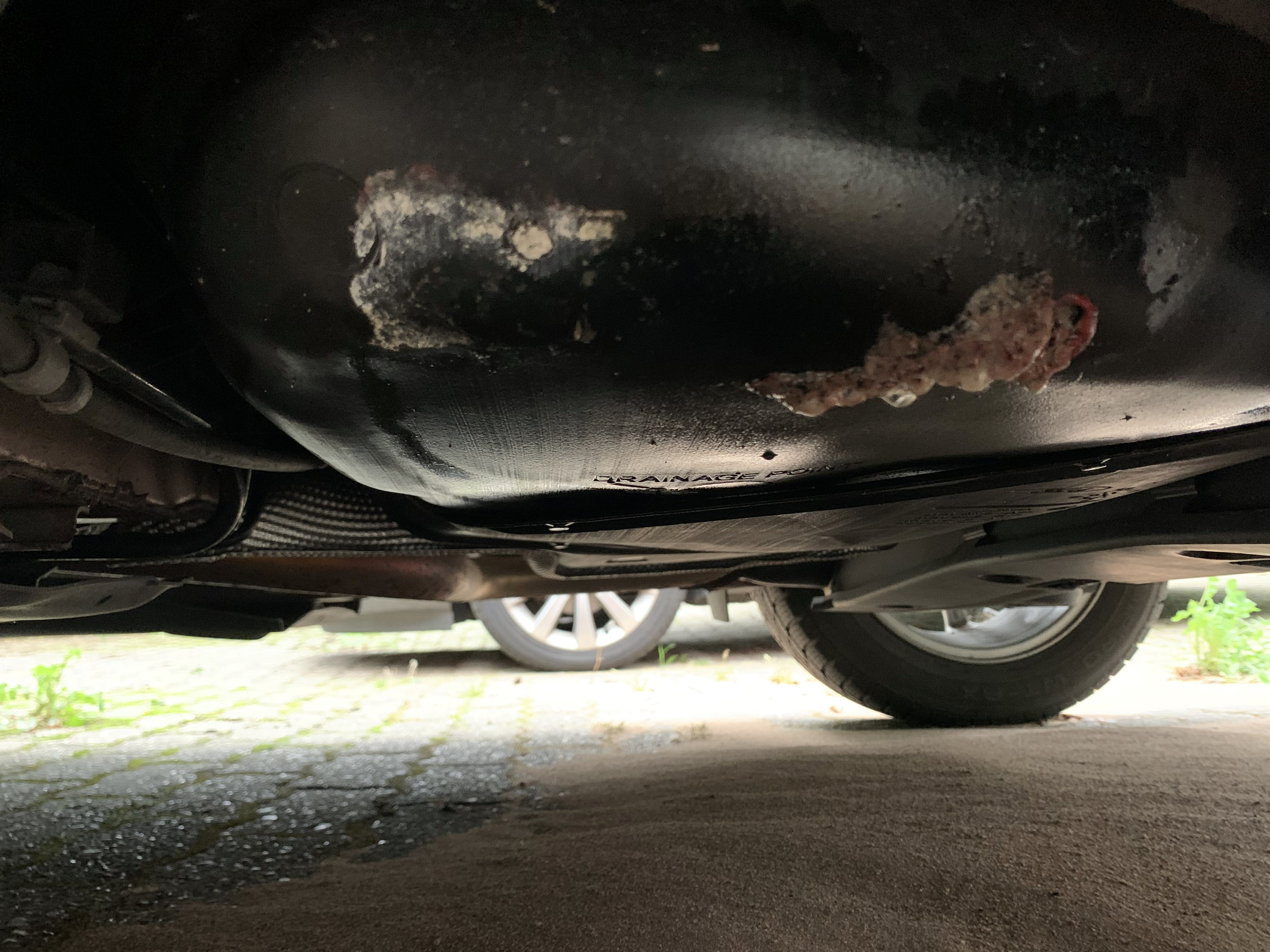 Jenni Turner had two holes the size of five pence pieces drilled under her car to steal fuelCredit: SWNS

Organised criminal gangs are often able to get away without any notice due to high-speed pumps they use to silently drain up to 1,000 litres per minute – meaning a whole HGV can be sucked dry with ease.

Mr Sell heard accounts of thieves’ pumps stretching half a mile away into a layby to fill tanks and large containers inside lorries, who then make a speedy getaway.

Other times, criminals destroy parts of the trucks to steal fuel – which has led the haulage boss to deliberately leave his fuel tap open in the hope that they won’t damage his vehicle.

Others The Sun spoke to claim criminals drive into spots with decoy trucks and some use fake AA uniforms to gain entry too.

Even when thieves have got away with large quantities of fuel, it hasn’t always gone to plan due to incorrect storage.

In August 2020, the wreckage of a Land Rover Discovery was revealed to have caught fire because it was storing 400 litres of diesel linked to fuel thefts in Northamptonshire. 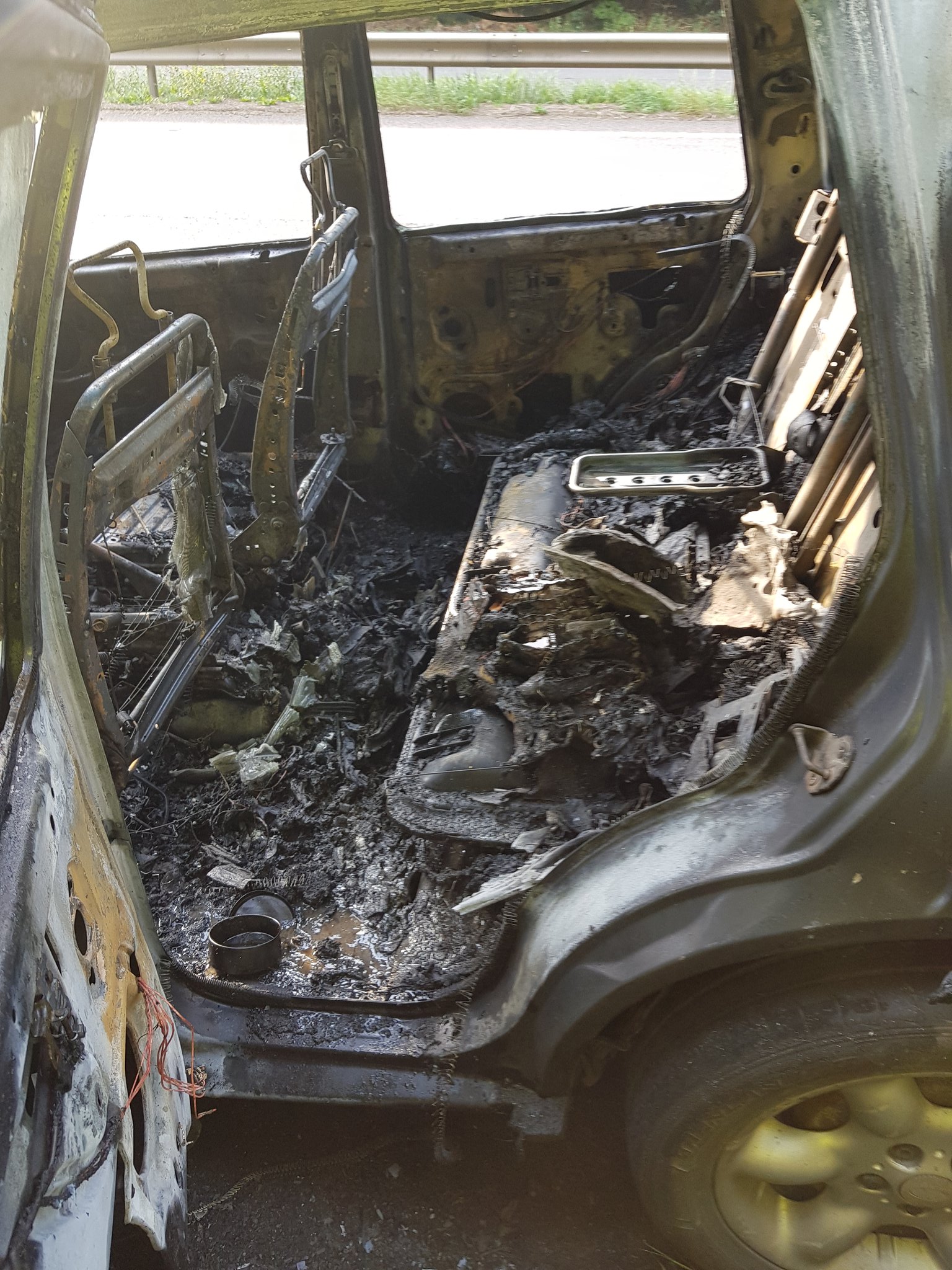 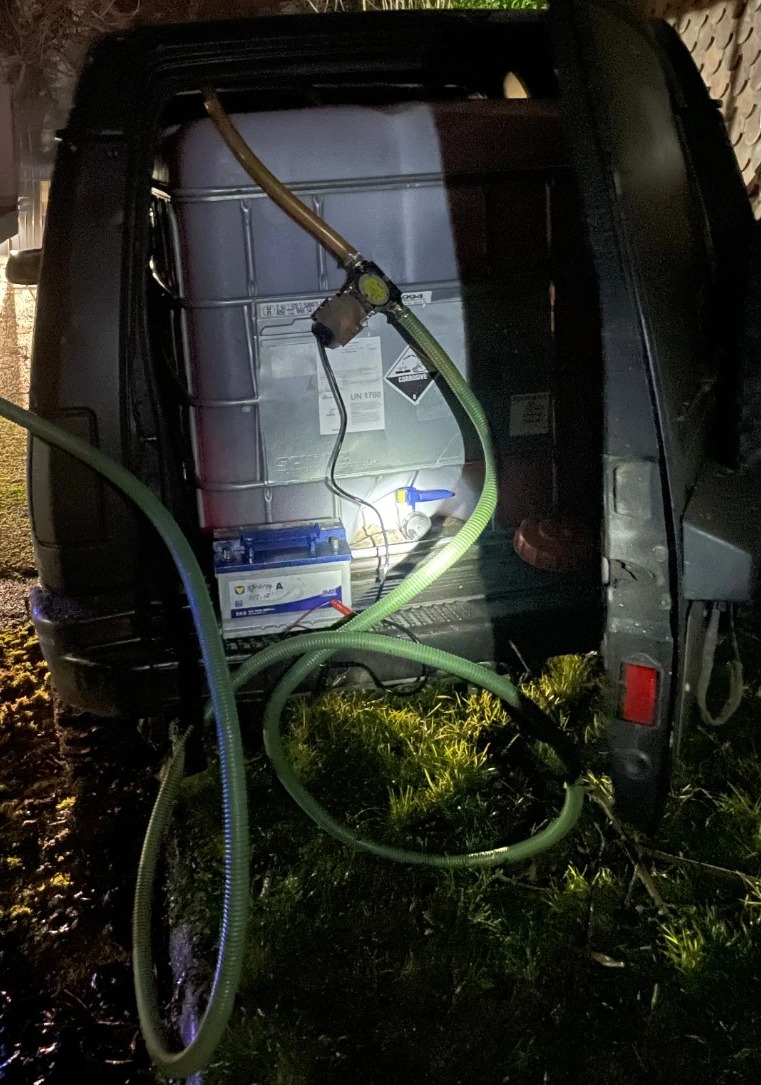 This vehicle was siphoning fuel through a clever pump system in NottinghamshireCredit: East Bassetlaw Police

‘We’re sick and tired of it’

Mr Day warns this could be the beginning of a “massive spike” in fuel thefts that will only continue to get worse.

He’s also concerned about changes to fuel duty – especially ‘red diesel’, which is currently sold at a lower duty rate for use in non-road vehicles such as bulldozers, cranes and diggers.

‘Red diesel’, officially named rebated diesel, is named after the coloured dye used to differentiate the fuel, which makes it easier for cops to catch crooks trying to peddle it.

Under the new rules implemented in April, only specific vehicles can purchase it and many in the construction industry will be excluded.

Instead they will have to buy normal ‘white’ diesel, as used by normal cars, which costs more and will make it harder for police to detect when fuel has been stolen.

Those who spoke to The Sun called for money resources being diverted to the police so they could investigate crimes and tougher sentences for those caught.

Mr Day believes it would take “massive investment” for police forces to resolve issues and to provide better security on parking bays for drivers.

He said: “Drivers want to feel safe while they are sleeping but they don’t. They feel the police are not responding.

“There must be a realistic deterrent through sentencing because it’s really demoralising to watch nothing change. We’re sick and tired of it.

“It’s a total failure in the system from police addressing it to ‘secure parking’, it’s not ‘secure’, and the guys feel vulnerable and angry.

“It’s no longer a pleasant industry to work in and it will get worse.” 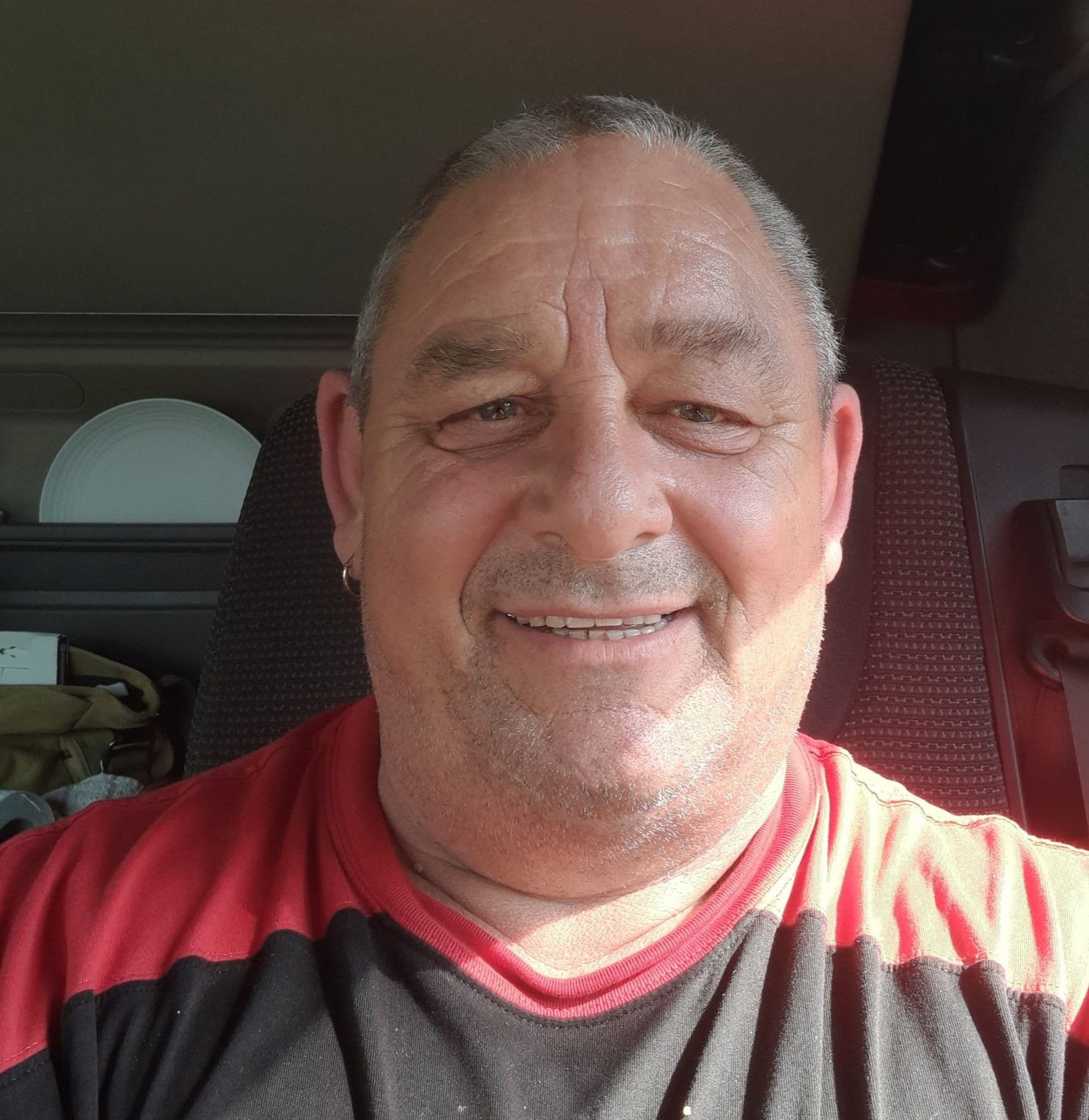 Chris Sull, who’s been a driver for 31 years, is furious about the diesel theft spike 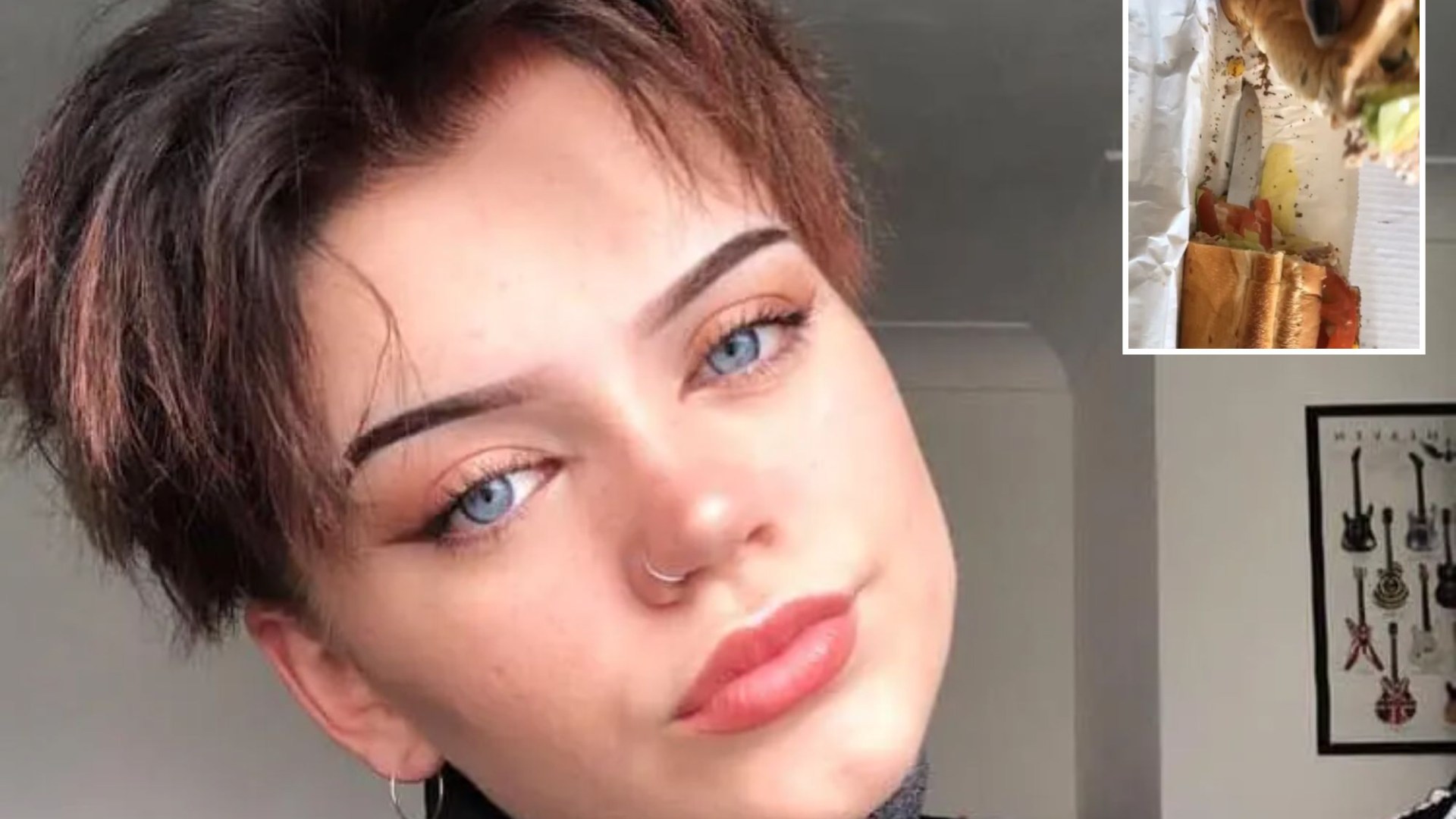