Huge 4,000kg iceberg shipped to Glasgow to melt outside COP26

It has been unveiled to remind the COP26 participants of the scale of the climate crisis (Picture: AP; Reuters)

An iceberg is melting in front of world leaders’ eyes at COP26 as they hold talks on how to save the planet from devastating climate change.

The 4,000kg block was ferried to south Glasgow by scientists from the group Arctic Basecamp.

Its founder, professor Gail Whiteman said: ‘All science indications are showing that the Arctic is in crisis and that’s not just bad news for the polar bear, that’s bad for countries and societies everywhere.

‘If we lose the snow and ice in the Arctic we will amplify global warming by 25 to 40%.’

She added: ‘Our message is that this iceberg is just the tip of the iceberg in terms of the climate emergency.

‘When they’re negotiating in the blue zone it’s really easy to forget the reality of climate change and instead focus on geo-political interests, economic issues, finance, power.

‘Yet the reality check is this iceberg just is going to keep melting regardless of the negotiations that they come up with at the end of next week. 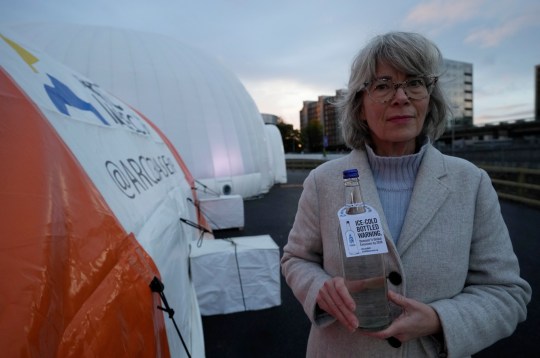 ‘However, perhaps if they come up with a good agreement, we will stop other icebergs melting.’

The group are also presenting the COP with what they call a bottled warning. 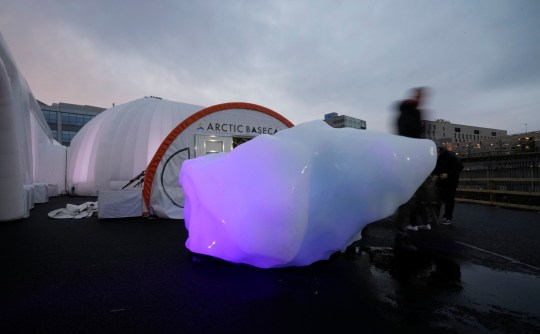 The iceberg delivered by members of Arctic Basecamp is on show near the COP26 UN Climate Summit in Glasgow (Picture: AP)

The researchers said 70 million of these bottles a second are melting off the Greenland ice sheet.

The iceberg was originally joined to a larger glacier but broke off under strain from rising temperatures.

It came by ship from Narsaq in Greenland to the east coast of England before having to return due to bad weather.

Finally it completed its onward journey by truck with its carbon footprint offset, of course.

Ms Whiteman said: ‘That was the best WhatsApp message I ever had when I heard the iceberg had cleared customs.’

The project has been supported by celebrities including model Lily Cole and the actor Rainn Wilson, a star of the US series of The Office, while supermarket chain Iceland helped to bring it over.