A CHEEKY McDonald’s worker has revealed what he does when customers are rude and demand fresh fries.

Deandre Byars sparked mixed reviews for his sneaky tactic on TikTok as he urged customers to “stop being rude”. 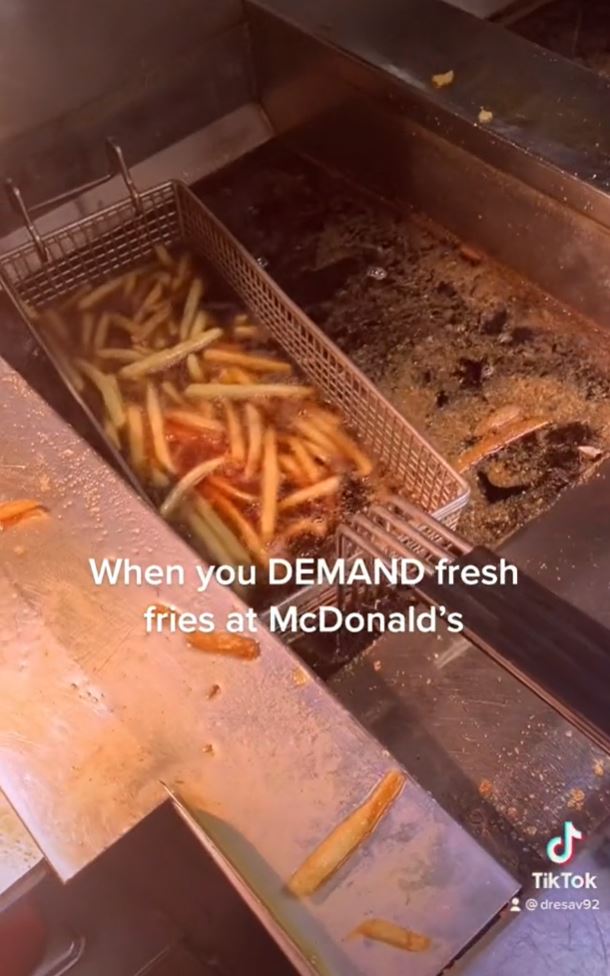 Sharing a clip on the social media site, the fast food worker showed what happens “when you demand fresh fries at McDonald’s”.

At first, Deandre can be seen scooping up a pile of chips from a heating station.

He then dumps the chips in a pan of hot oil and quick-fries them.

After a few seconds, the fatty treats are ready to be served a second time to their original customer – totally unaware.

Viewers were quick to comment on the hack, with one person asking: “How is asking for fresh fries rude? I swear people love to do the bare minimum.”

Meanwhile others slammed the TikToker for ruining the fries themselves.

One said: “That’s something you are not supposed to do, because the salt ruins the oil.”

Another fumed: “Do what’s asked the first time people ask and they wouldn’t have to demand the next time.”

Others, however, said they only cared that their chips were hot.

One person said: “This is GENIUS”.

Another added: “Lol that’s fine as long as they’re hot.”

Someone else said: “Literally as long as they aren’t cold, tough, or soggy idc.”

Earlier this month a McDonald’s worker revealed the lengths staff go to to destroy millions of pounds worth of Monopoly stickers in an apparent attempt to stop customers digging them out of the bins.

Another TikToker also shared a host of videos showing how food is prepared at the fast food chain.