Insulate Britain protesters once again attempted to block a route on to the M25 on Tuesday morning – and also blocked traffic in Manchester and Birmingham.

Activists descended on the South Mimms roundabout at Junction 23, where six of the demonstrators were stopped from getting into the road at about 8am.

But in an apparent escalation of their tactics in the group’s eighth week of causing disruption, Junction 6 of the M56 near Manchester Airport, and the A4400 in Birmingham was also targeted.

Near the M25, the group sat on the pavement with a banner, while some glued themselves to the surface.

Police carried demonstrators away, with a group of officers lifting activists from the pavement beside the road and putting them in the back of a van.

At least one man has been detained at the scene.

The latest action by the radical environmentalists comes despite a number of injunctions and other efforts by the government to deter the group from its demonstrations. 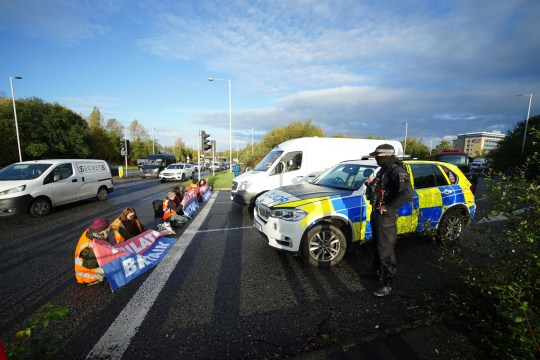 Protesters in Manchester blocked a road near to the airport (Picture: PA)

The group says today is the 17th time that Insulate Britain has caused disruption on motorways and A roads as part of its civil resistance campaign.

It added that 161 people have taken part in the campaign and there have been 770 arrests – meaning many have been arrested multiple times.

The activists are urging the government to do more on the climate crisis, and particularly to insulate buildings in the country, amid dire warnings from scientists about global warming.

Gabby, 27, a graphic designer from Norwich said: ‘We are taking our message to people outside of London because we want everyone to know that our government is killing our children. 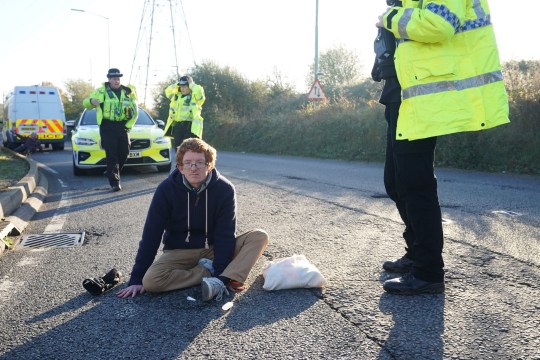 A protester glued to the road during the M25 protest on Tuesday morning (Picture: PA)

‘Britain should be leading the world with radical plans to decarbonise our society, instead our government is actively setting policies that will drive emissions higher.

‘The public can close their eyes but this isn’t going away, no one is coming to save you.’

Some passers-by near the M25 were heard shouting expletives at the protesters, while one car appeared to run a red light and almost hit one.

More than a dozen officers and seven police vehicles are on the scene near the M25. 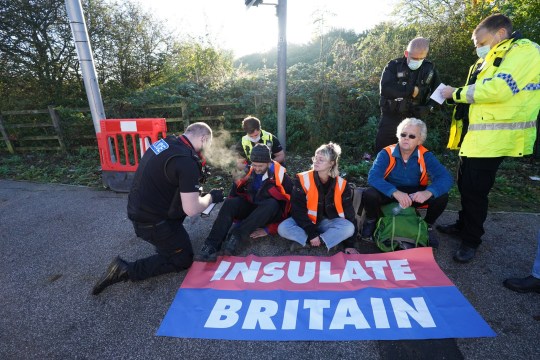 Officers were speaking to protesters at the roadblock (Picture: PA)

Insulate Britain has infuriated motorists with numerous demonstrations, mainly around the M25, and faced criticism from across the political spectrum, including from the then leader of the Green Party.

It had paused its activism, but returned last week – despite increasingly severe injunctions from government and fears that their actions are dangerous.

But the group says the scale of the climate crisis justifies their actions, with others pointing out that many groups who subsequently win praise are unpopular at the time, like the suffragettes.

On Tuesday morning, Insulate Britain confirmed that nine of its demonstrators had received committal papers in relation to an injunction granted to National Highways to curb eco-activist roadblocks.

Spokesperson Diana Warner, 62, a retired GP, said: ‘One of the important reasons for coming out today was to say we’re all together. It’s not just nine.’