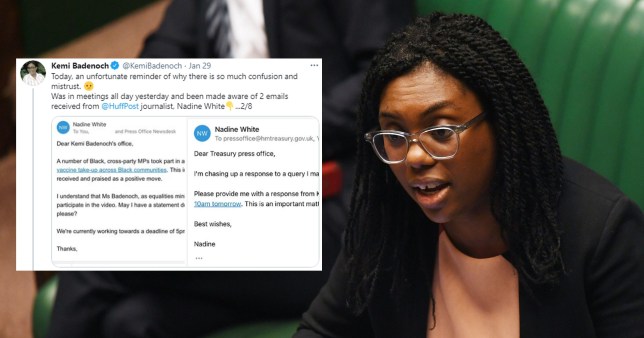 A reporter who was publicly attacked by a minister for asking about her role in a vaccination campaign has urged her to delete her tweets and say sorry.

Nadine White became the target of online abuse and nuisance phonecalls after she was accused of ‘making up claims’ by Kemi Badenoch, who shared emails from her for all her Twitter followers to see.

The HuffPost UK reporter says she was simply asking a question, after hearing from senior political sources that the equalities minister refused to participate in a cross-party video of Black MPs encouraging Black communities to take up offers of coronavirus vaccines.

Asking such a question upon hearing a rumour isn’t unusual for reporters, and no story on the claim was ever published, but Ms Badenoch called her query ‘creepy and bizarre’ and accused the news site of ‘looking to sow mistrust’ and ‘chasing clicks’.

The Labour Party have since called for an investigation into whether the minister broke ministerial code, while press freedom campaigners have also spoken out against her actions.

Appearing on BBC Radio 4’s Woman’s Hour today, Ms White called on the minister to ‘do the right thing’ by apologising and deleting her tweets. 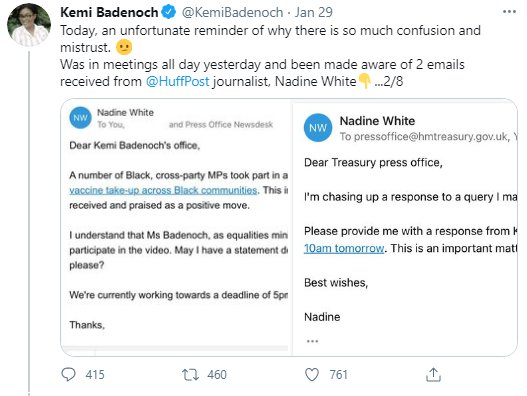 The equalities minister accused Ms White of ‘looking for conflict’ for asking a question about claims made by political sources (Picture: Twitter)

She told the programme: ‘It was just a simple case of my asking her a question, she should have just replied with information about why it is she did not participate in a video, which she set out quite clearly in her thread.’

The minister explains in her tweet that she couldn’t appear in the video because she was taking part in and promoting vaccine trials, but critics have said she simply could have said that in an email.

Ms White added: ‘It shouldn’t be the case that a minister is taking to Twitter to attack a journalist for asking a question, so I do think there is a breach of ministerial code.

‘As far as what I would like to see coming out of this situation, I would like for the minister to remove the tweets. It’s been a number of days and that still hasn’t happened – and also apologise publicly for her behaviour.’

Ms White told presenter Emma Barnett how she became the centre of a pile-on after the Conservative MP for Saffron Walden posted her thread, forcing her to make her Twitter account private to block out the trolls. 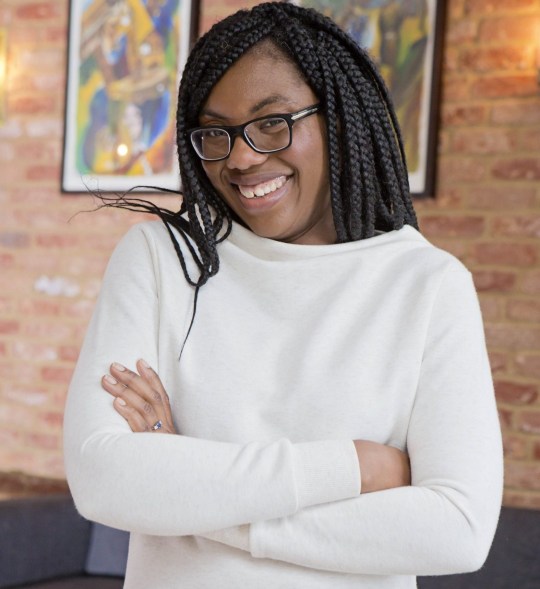 Ms Badenoch is now facing calls to apologise and take down the tweets (Picture: REX/Shutterstock)

When asked what the wider implications of the saga could entail, she said: ‘I think it could mean that it suggests that there is something wrong with a journalist reaching out to a minister, an elected public figure, to ask a question.’

Responding to the spat, Downing Street appeared to distance themselves from Ms Badenoch’s remarks, saying that her response ‘would not be how we in No 10 deal with things’.

Boris Johnson’s press secretary Allegra Stratton added: ‘Kemi Badenoch felt that the correspondence with Nadine White was something she should put in the public domain.

‘That would not be how we in No 10 deal with these things and we encourage all of you to ask us challenging, difficult questions.

Ms White called the Prime Minister’s response ‘deeply unsatisfactory’. When asked what her message would be to Ms Badenoch if she was listening, the journalist said: ‘Do the right thing, apologise, please delete the tweets and we can all move on.’

A Government spokesperson told BBC Radio 4: ‘The minister has been working to encourage vaccine take-up and confidence amongst those disproportionately affected by the pandemic.

‘She believes that to instil confidence in the vaccine it is vital to remain unified and not undermine the message of promoting take-up amongst minority communities.

‘We want every eligible person to benefit from the offer of a free vaccine, no matter their ethnicity or religious beliefs. To ensure this happens the Government is pursuing a unified approach to public health messaging as was demonstrated by the cross-party video.’