CCTV footage shows the moment three kebab shop workers dragged a man along the street before battering him inside their takeaway.

Zafar Ahmed, 35, along with brothers Asmat Khan, 33, and Mohammed Khan, 25, repeatedly punched and kicked Adrian Perry and hit him with a traffic cone.

The court heard Asmat Khan approached Mr Perry outside Victoria Kebabs on Mansfield Road, Nottingham, at around 4am on June 12 last year and accused him of an earlier break-in.

Mr Perry was then attacked for 15 minutes before police arrived and saw him collapse unconscious on the pavement outside the shop.

He was rushed to hospital where he was treated for a smashed eye socket, a broken cheekbone and jaw and a fractured arm.

Ahmed and the Khan brothers were arrested at the scene and admitted grievous bodily harm.

All three were jailed for two years at Nottingham Crown Court on Thursday.

Mr Perry was never charged with robbing the takeaway and police are not investigating him.

Asmat Khan had grabbed hold of Perry before forcing him to the ground and assaulting him.

He was then joined by his brother, Mohamed Khan and Ahmed before all three started beating him on the ground.

Footage shows the men dragging Perry along the street before opening the shutters to the takeaway and hauling him inside.

CCTV inside the takeaway shows Perry being stamped on and kicked in the head and body multiple times.

He was also hit with a traffic cone and grabbed by his hair.

After being beaten, Perry was ordered to stand up before being punched from behind so hard that he fell to the floor again. 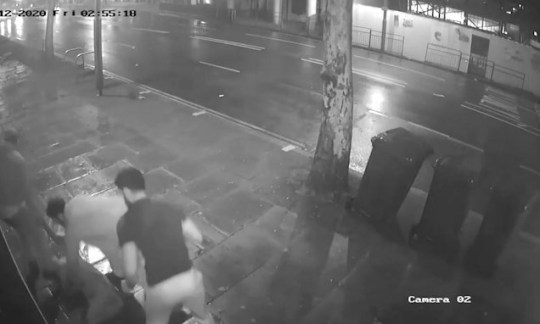 They dragged Mr Perry from the street (Police)

When officers arrived outside they saw the victim staggering towards them before falling to the pavement unconscious.

‘The victim was treated in hospital after suffering broken bones, including a broken eye socket.

‘The psychological impact will stay with him forever.

‘These three men have proven that they are capable of organised violence which goes against every fibre of our being.

‘It is beyond expression that they continued to assault and beat their victim while he lay defenseless on the floor.

‘I’d like to thank the member of the public who rightly reported the suspicious nature in which the victim was dragged into the shop to Nottinghamshire Police.

‘I fear, that if they hadn’t, this incident would have had a much different ending.’