Three more towns have been evacuated on the Spanish island of La Palma due to intensifying volcanic eruptions.

Flights were cancelled to the popular tourist destination in the Canary Islands as a cloud of gas and ash filled the sky.

Fiery explosions have been seen emanating from volcano as the eruption, which began on Sunday, entered a new phase.

Loud bangs from the volcano’s mouth sent shockwaves echoing across the hillsides, while explosions hurled molten rock and ash over a wide expanse.

Some 400 buildings have already been destroyed and, on Friday, authorities ordered the evacuation of the towns of Tajuya, Tacande de Abajo and the part of Tacande de Arriba that had not already been evacuated

‘The volcano is in a newly explosive phase … Firefighters will not operate anymore today,’ tweeted the Tenerife fire service, which has been deployed to help on La Palma.

Those who have been evacuated were told to assemble at a local football ground.

Some had their animals with them, including a number of reluctant goats who starred in a video tweeted out by the Guardia Civil. 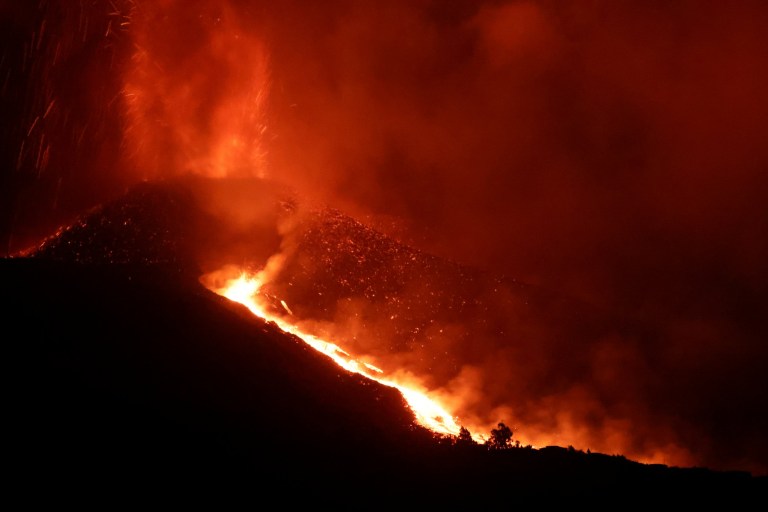 Fire has lit up the hillside on La Palma (Picture: Reuters) 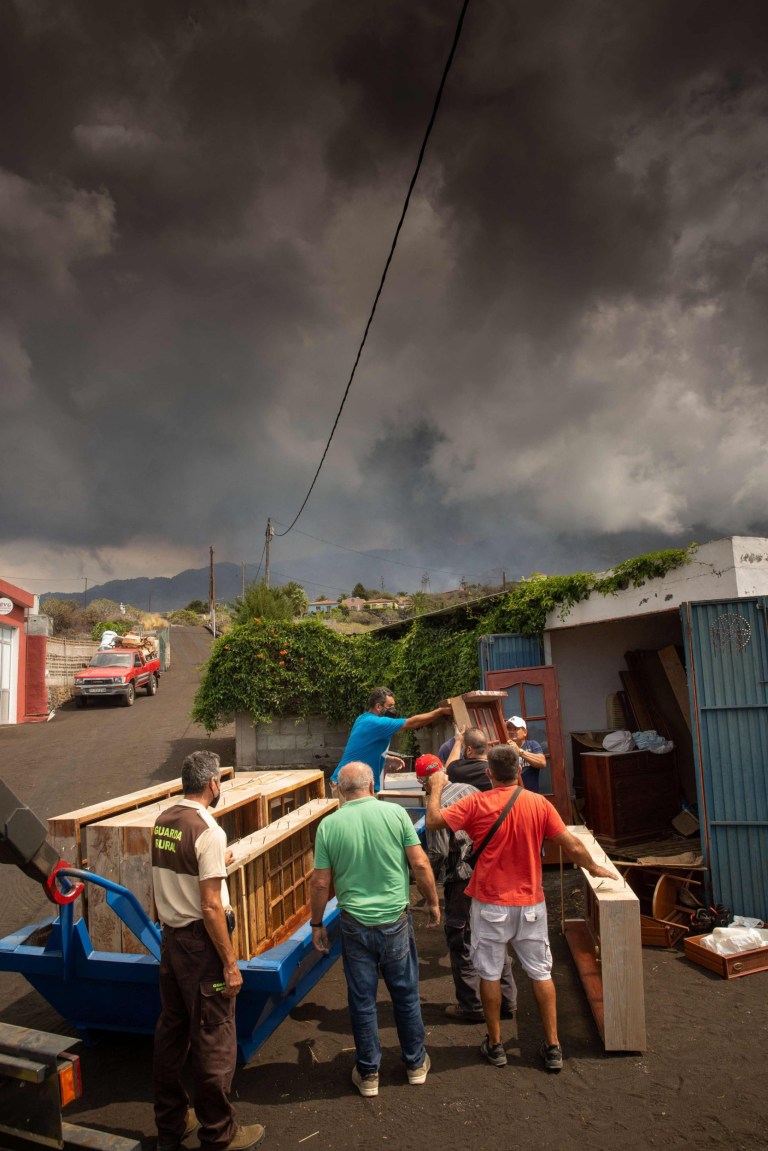 People have been forced to evacuate their homes (Picture: Getty)

Canary Islands emergency services had initially told residents to stay indoors to avoid the dense cloud of ash and lava fragments but later decided to evacuate due to the heightened risk from explosions.

Thousands have been evacuated since the volcano, known as the Cumbre Vieja, started spewing out thousands of tonnes of lava.

No serious injuries or fatalities have been reported but about 15% of the island’s economically crucial banana crop could be at risk, jeopardising thousands of jobs.

Canary Island airline Binter said on Friday it had cancelled all flights to La Palma due to the volcano eruption, while Iberia cancelled its only flight scheduled for the day, and another local airline, Canaryfly, also suspended operations. 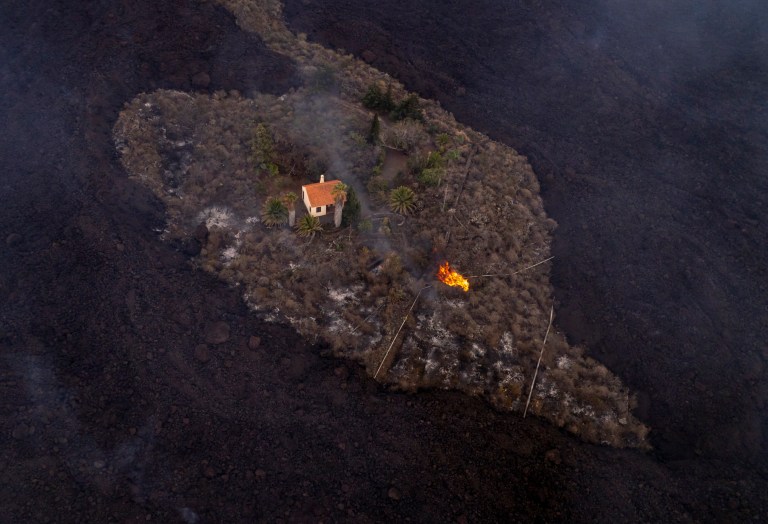 A house was saved but was surrounded by lava (Picture: AP) 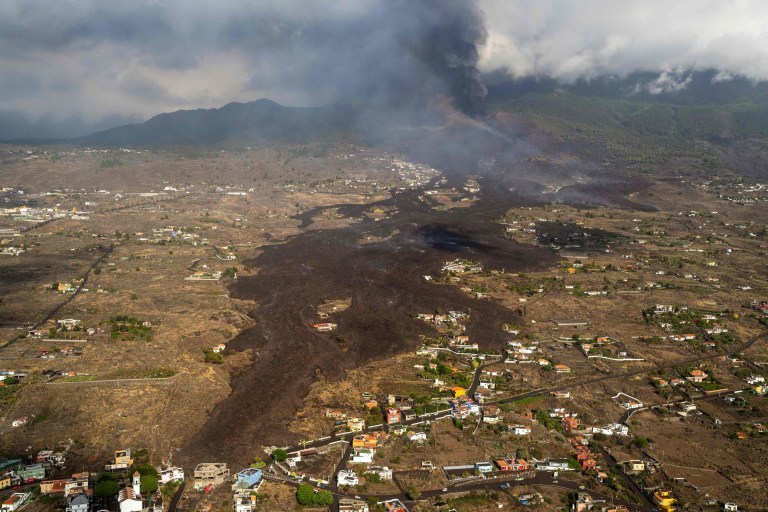 Around 400 buildings have been destroyed (Picture: AP) 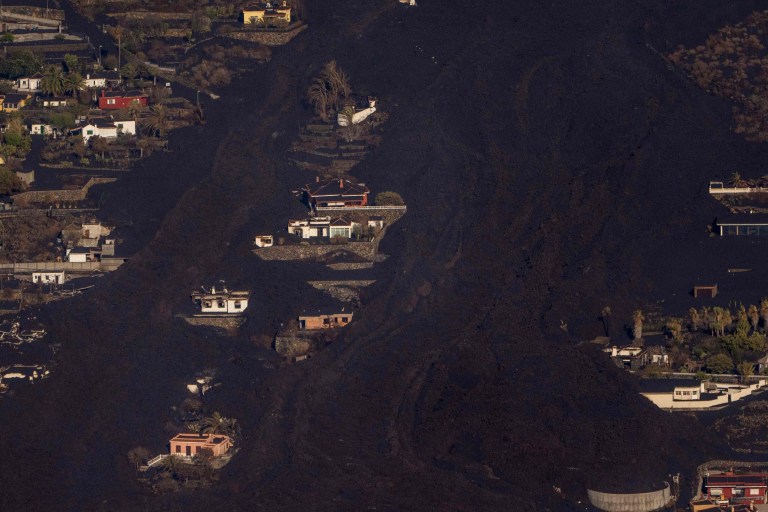 Remarkably, no one has yet been injured (Picture: Getty) 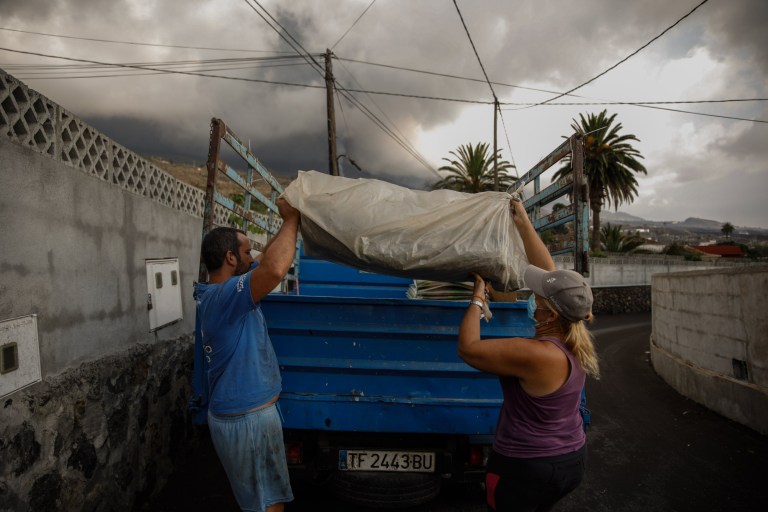 People do not know when they will be able to return home (Picture: Getty)

Binter said it was forced to halt operations to and from La Palma as the ash cloud had worsened considerably in the last few hours.

The airline, which had initially only cancelled night flights, could not say when it would resume operations.

On a visit to La Palma, Spanish Prime Minister Pedro Sanchez announced a package of measures to help get the island back on its feet and ‘rebuild lives’.

The Spanish government will provide aid for rebuilding homes and public infrastructure, such as roads, irrigation networks and schools, as well as relaunching the island’s tourism industry, Mr Sanchez said.

He did not say how much money would be made available, but said a cabinet meeting next week would provide more details.