The little one was struggling to keep still while on a sugar high at the Queen’s Jubilee Pageant (Picture: AP/Getty/Rex)

Sitting still for hours at a time is pretty much impossible when you’re a kid – something that was shown by Prince Louis at his great-grandmother’s Platinum Jubilee last weekend.

The restless four-year-old was a huge hit with royal fans after pulling faces while on a sugar high at the Queen’s Jubilee Pageant.

While we all loved his playful antics, mum Kate Middleton was forced to step in with some stern words to calm him down at one point, a lipreading expert told the Daily Star.

Jeremy Freeman says the Duchess of Cambridge told her son to stop when she spotted him fidgeting with his hands on his face, potentially picking his nose.

After pulling his hand down, she apparently told him: ‘You have to.’

The little one is said to have replied ‘I don’t want to’, before covering his mum’s mouth and turning back to the parade.

Kate wasn’t having any of it though, reportedly telling him: ‘I said no hands’.

She then pointed to the extravagant celebration below and told Louis ‘look’, before giving a wave to crowds. 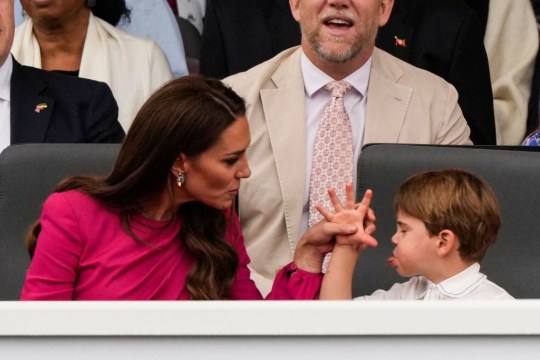 The Duchess of Cambridge has been praised for her calm parenting (Picture: Frank Augstein/Pool/AFP via Getty Images)

The youngest Cambridge blew raspberries and stuck his tongue out at his mum – but was warned ‘stop doing that’.

Louis eventually settled down and was seen sharing a sweet moment with his grandpa Prince Charles.

The future King tried to distract him by pointing out different floats in the event that brought the four-day weekend to a close.

Uncle Mike Tindall has said he sympathises with Louis who ‘just wanted to have fun’.

Staying quiet during the show was ‘tough’ for all the children in the royal box, the rugby star said.

‘They’re all young… it’s a long time. But as any parent knows, you just do whatever needs to be done,’ he added.

The dad-of-three revealed that the ‘lots of sweets out back’ likely had something to do with the prince’s excitability. 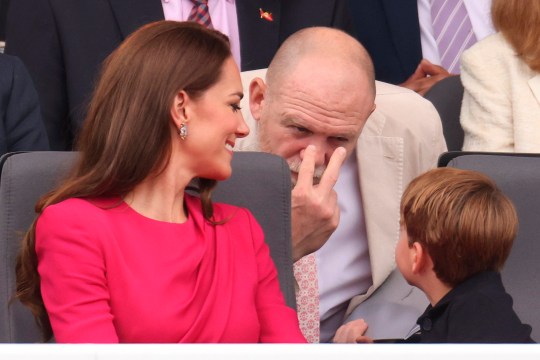 Mike Tindall jokingly tells Louis he’s got his eyes on him (Picture: AP) 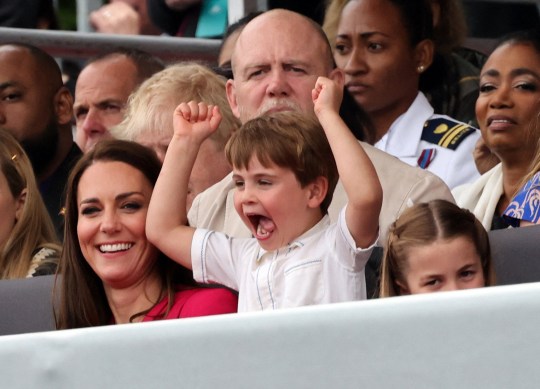 The four-year-old won hearts across the nation with his antics last weekend (Picture: Pool/AFP via Getty Images)

Kate’s calm parenting was praised by Jo Frost – better known as ‘Supernanny’ – who said the duchess has ‘never been afraid to tell the kids to stop in public’.

The childcare expert added: ‘Unlike other children the royals are expected by the world to behave a certain way but at the end of the day they are children, royalty or not.

‘The whole fanfare will become a little too much when you’re young – it was a long day, little moments like this are going to happen, especially if you are strong willed, sensitive and actually I would go as far as to say a highly sensitive child in my professional opinion.’