The iconic Hammersmith Bridge is back in business after nearly a year (Picture: Getty)

Londoners have flocked to Hammersmith Bridge after it finally reopened this morning.

Cyclists and families headed down to the iconic 134-year-old iron bridge which has been out of action for almost a year.

A heatwave caused cracks in its structure to worsen last summer, prompting a closure which gave people in the area a travel headache.

Cars haven’t been able to use the ageing bridge since 2019 but the route is popular with pedestrians – and it reopened just in time for a sunny Saturday morning.

Some delighted local residents walked across it several times and joggers were seen reclaiming their old running route.

At its southern end, one woman sang from a mini stage erected in the middle of the road.

A ban on river traffic beneath the bridge was a key factor in the decision to move the annual University Boat Race to Cambridgeshire but rowers were seen passing beneath it this morning. 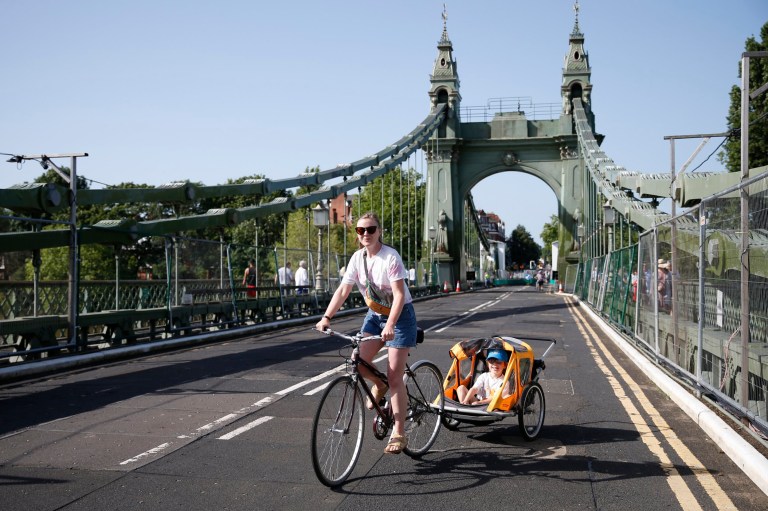 The 134-year-old bridge isn’t in the shape it used to be but it’s finally safe enough for people to cross again (Picture: Getty) 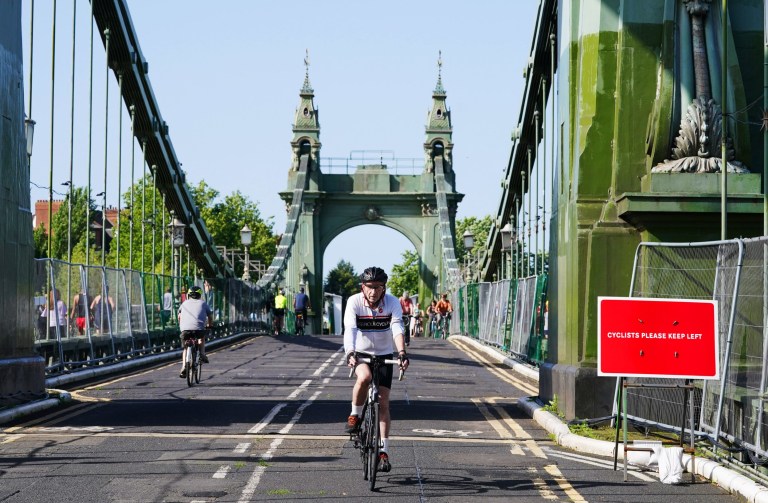 Modern technology, including acoustic sensors that pick up the sound of cracks developing, has been deployed to give the grand old bridge a new lease of life (Picture: PA) 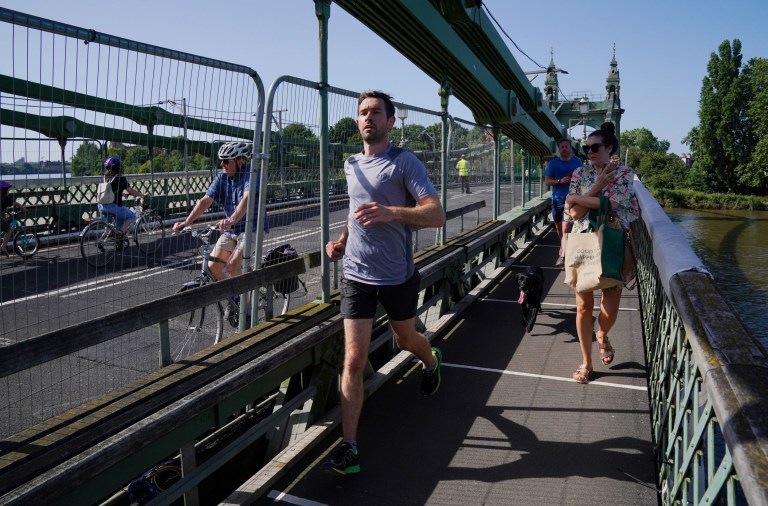 The classic suspension bridge spans the Thames or join the Borough of Hammersmith and Fulham with Barnes (Picture: PA)

The closure increased journey times and congestion as people took alternative routes across the Thames.

Hammersmith and Fulham Council say it has passed safety checks and a £420,000 temperature control system has been installed to help prevent new cracks from appearing.

Acoustic sensors have also been fitted to identify further cracks. 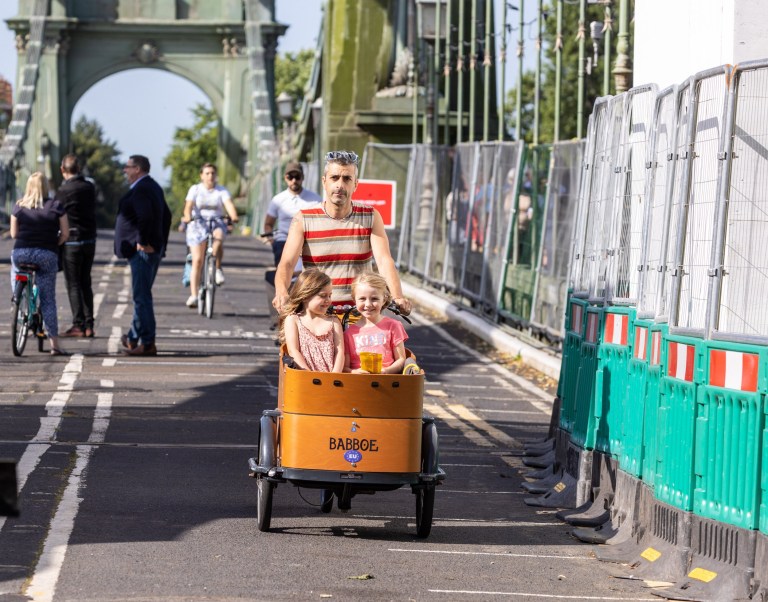 Families, joggers and cyclist flocked down to the bridge for the grand reopening on a sunny Saturday morning (Picture: LNP) 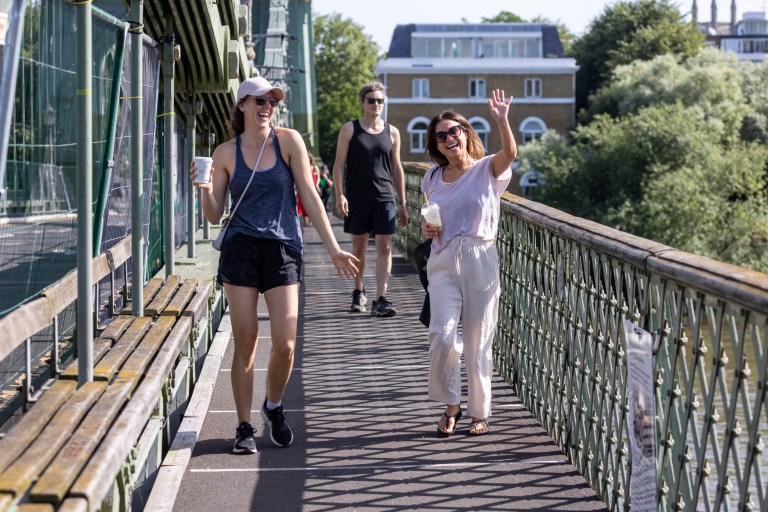 It’s a relief for people living in the area who’ve been forced to find new and elaborate routes while it’s been closed (Picture: LNP) 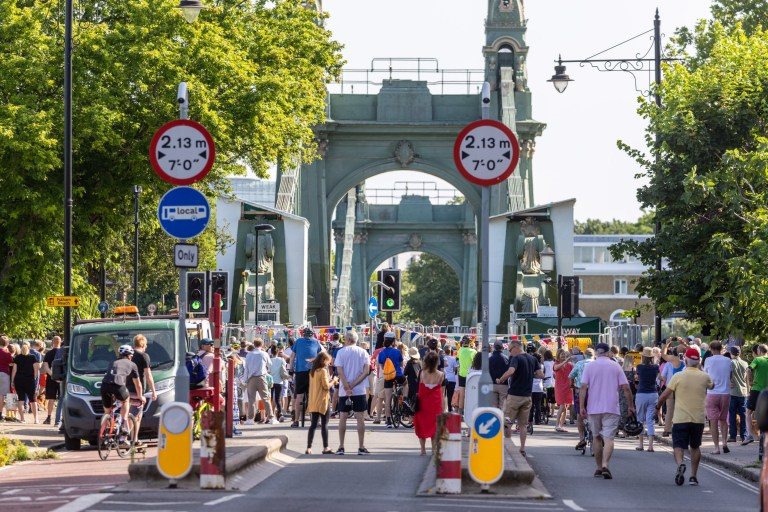 There’s still a long way to go until it is back to full health and the government aren’t keen on footing the £100 million repair bill (Picture: LNP)

The board for the Case for the Continued Safe Operation of the bridge (CCSO), which is advising the council, said these measures combined with engineering inspections mean the safety risk of allowing pedestrians and cyclists to use the crossing is ‘acceptably low’.

But it warned the ‘temporary measures’ were ‘not a substitute for permanent repair’, adding: ‘Without a funded plan for repair the limited current use must cease eventually.’

The total repair bill is expected to exceed £100 million but the transport department has said it will not contribute more than a third of the funding.