A FAMILY has spoken of their relief after surviving a gas explosion which left their house obliterated.

Darren Cornish, 48, was with parents Alan, 73, and Josie, 75, when the property collapsed around them – but the trio somehow made it out alive. 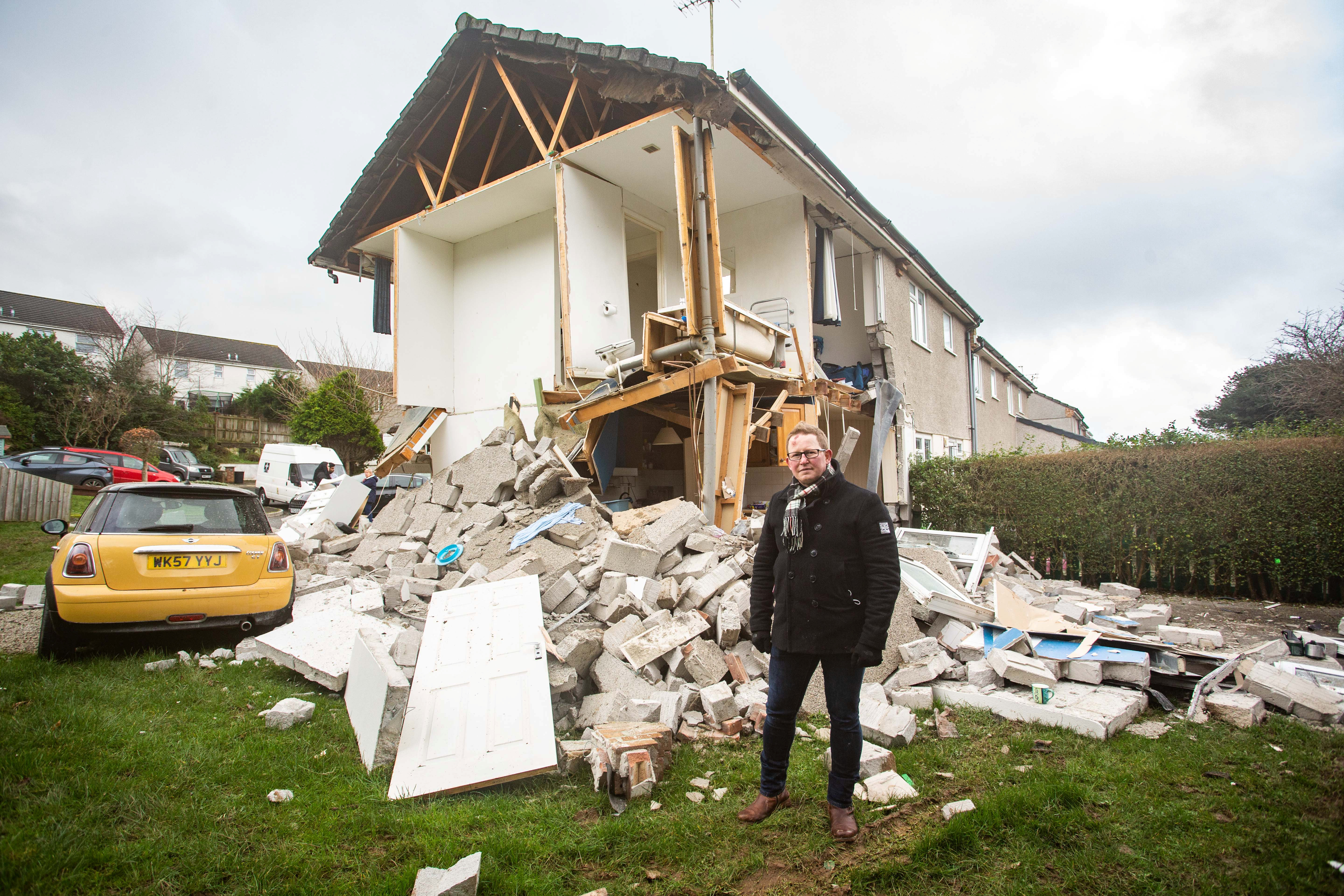 Darren Cornish, 48, was with his parents in their house in Bude, Cornwall when a gas explosion obliterated the property 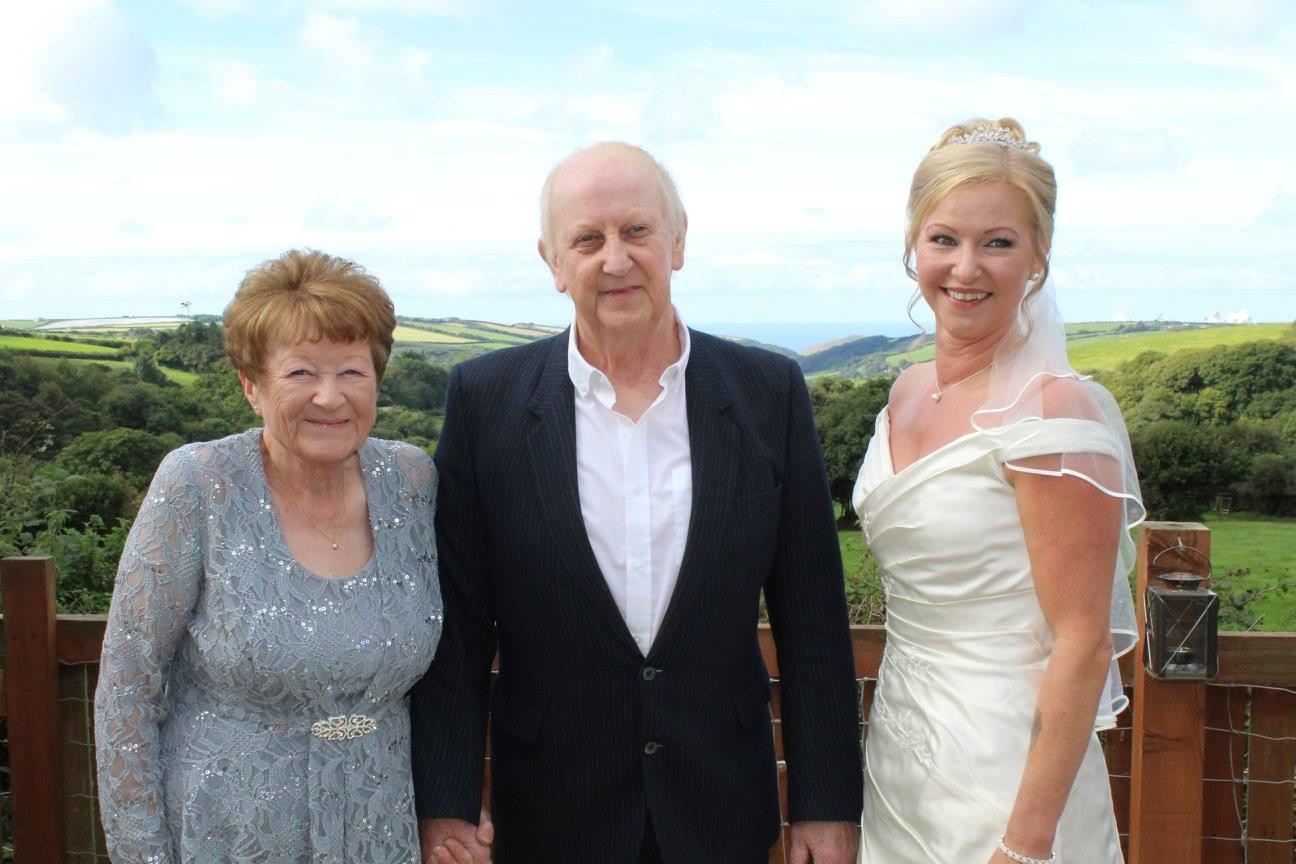 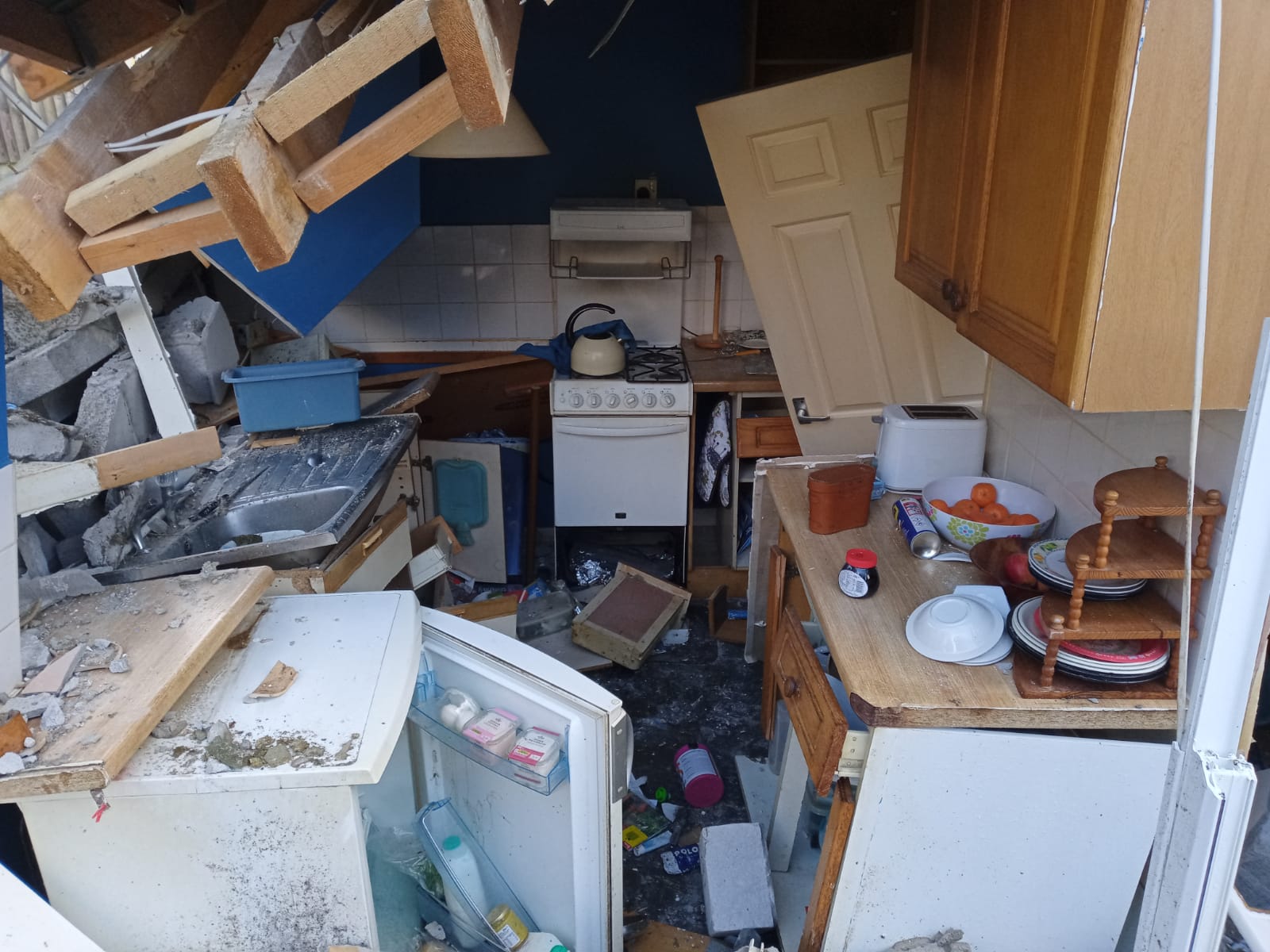 The kitchen was completely obliterated by the blastCredit: Demelza Snell 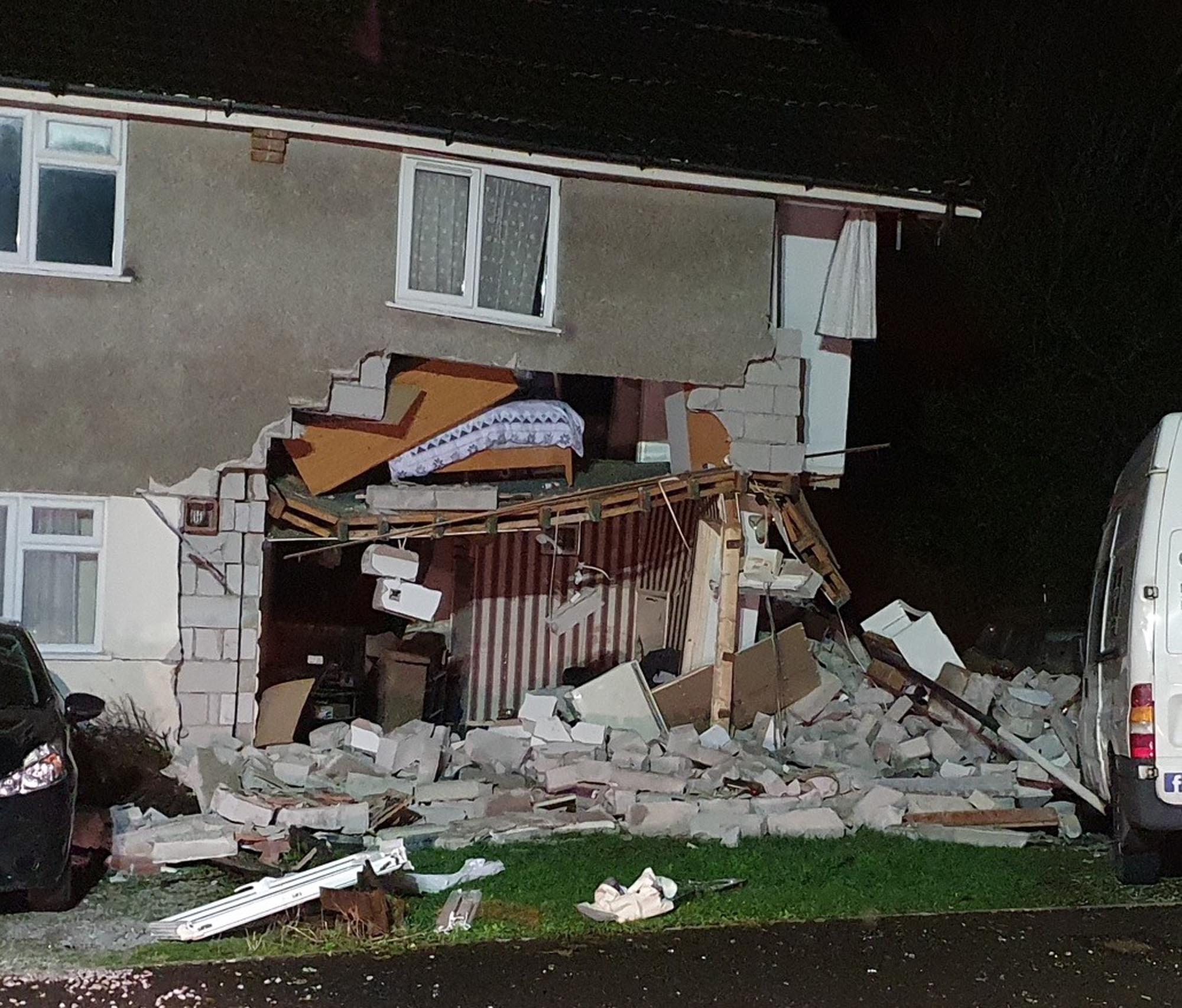 Emergency services rushed to the house in Bude, Cornwall shortly after 9pm on January 21, with locals claiming the blast was “like a bomb going off”.

Daughter Demelza Snell, 41, told of her shock at receiving a call from worried neighbours saying there had been a gas explosion at her parents’ house.

Darren, who works as a forensic paramedic in Weymouth, Dorset, is in his mum and dad’s support bubble and had been visiting them that evening.

Before the blast, he had been investigating a possible gas leak in the kitchen with mum Josie, who turned on the cooker to check it was working.

But this caused the oven to explode – blowing the house to smithereens.

Darren and Josie were knocked off their feet by the force of the blast and suffered burns to their face and hands – but miraculously survived as dad Alan suddenly found himself sitting on the front lawn.

Demelza told The Sun Online: “My dad was in the front room when the explosion happened.

“Then he said all of a sudden he was looking out onto the street with the TV remote in his hand. He sat there for a few moments just staring into space from his seat on the front lawn.”

Photos released by the fire service last week showed bricks and mortar laying around the garden as the top of the house dangled perilously in the air.

Two kind neighbours helped Alan, Josie and Darren out of the debris as emergency services raced to the scene.

Arriving at the house half an hour later, Demelza said she was “gobsmacked” by the devastation.

She added: “I put my hand on my mouth. I just couldn’t believe what I was seeing.

“Paramedics told me mum was alright and they had put her in the ambulance.

“I went in to see her and the slippers on her feet were all singed and some of her hair had been burned – but thankfully she was fine.

“Dad was in the neighbour’s house and paramedics were taking care of him.

“I couldn’t believe they had survived. Everyday I’m still sitting here telling them: “I can’t believe you’re alive. You are so lucky.’

“Mum talks about seeing white feathers, and said she had seen one the day before the explosion. She thinks it’s her mum watching over her.

“Somebody must have been watching over. It was unbelievable.” 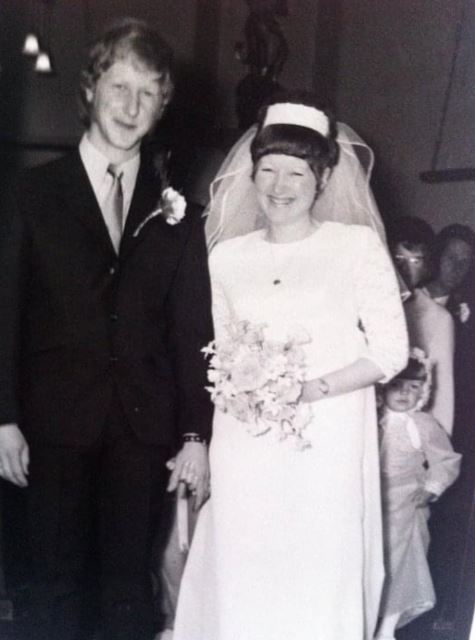 Alan and Josie, seen on their wedding day in 1971, are making a full recoveryCredit: Demelza Snell 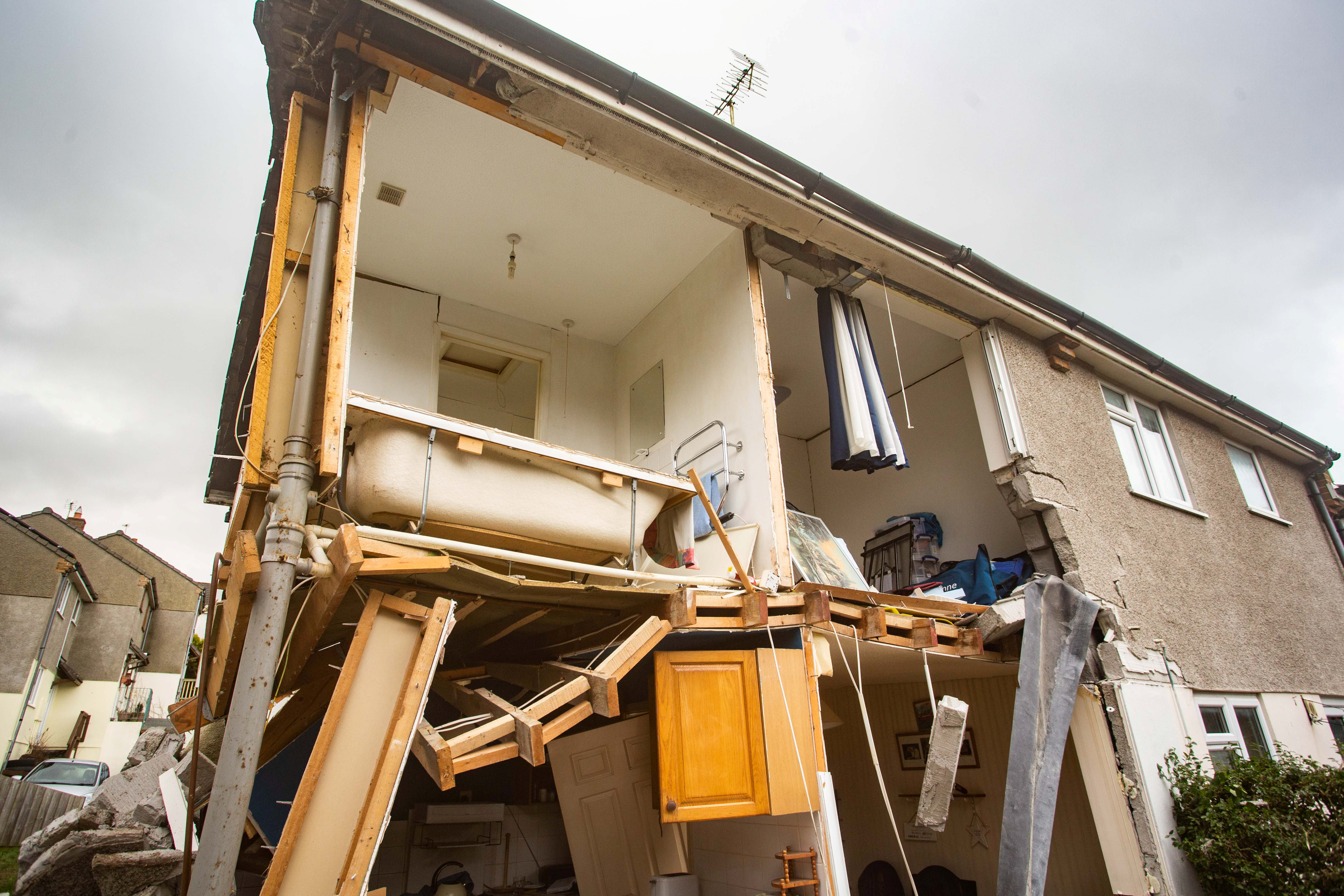 One of the upper rooms is seen hanging precariously in mid-air, leaving a double bed exposed to the street 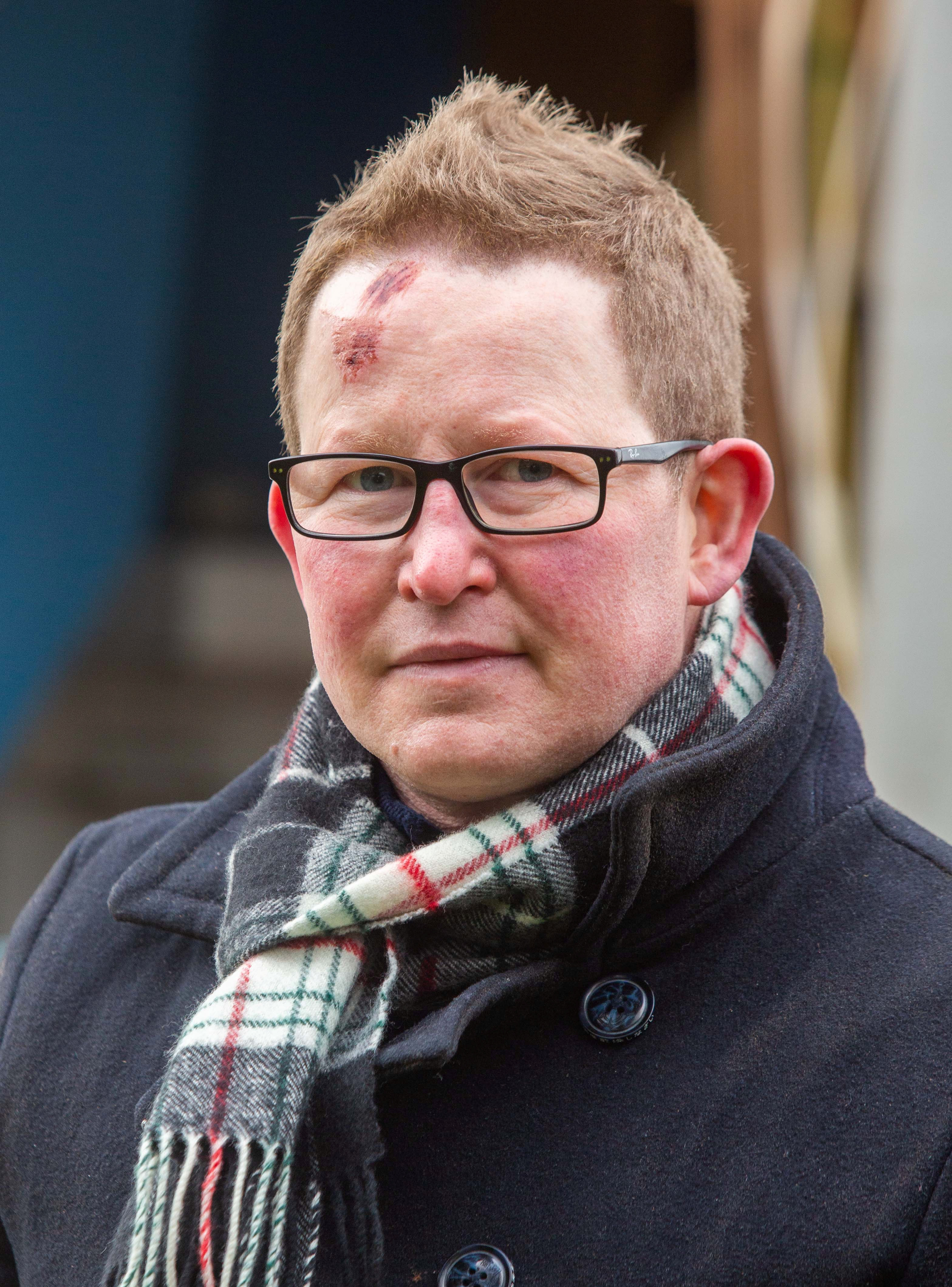 Just after the blast, Darren spoke of the horrific moment the house blew up around him.

He said: “It was really scary. I saw my life flash before before my eyes.

“I thought I was dead, I really thought I had died.”

Mum Josie was taken to Bristol Hospital to be checked, but she was discharged that evening and her parents spent the night at Demelza’s house in nearby Kilkhampton, where they are continuing their recovery.

Demelza said: “Mum had a slightly swollen face the day after. She kept saying: ‘I look in the mirror and don’t recognise who it is!’

“But we keep telling her she’s beautiful.”

Nearly a week after the explosion, Demelza said dad and former labourer Alan is still having flashbacks of the blast – but his overall health is “fine”.

Josie, meanwhile, was taken to Southmead Hospital for treatment for an infection on Sunday, but Demelza said she is in “good spirits” and expects her to be discharged this weekend.

Darren is making a full recovery and expects to return to work next week. 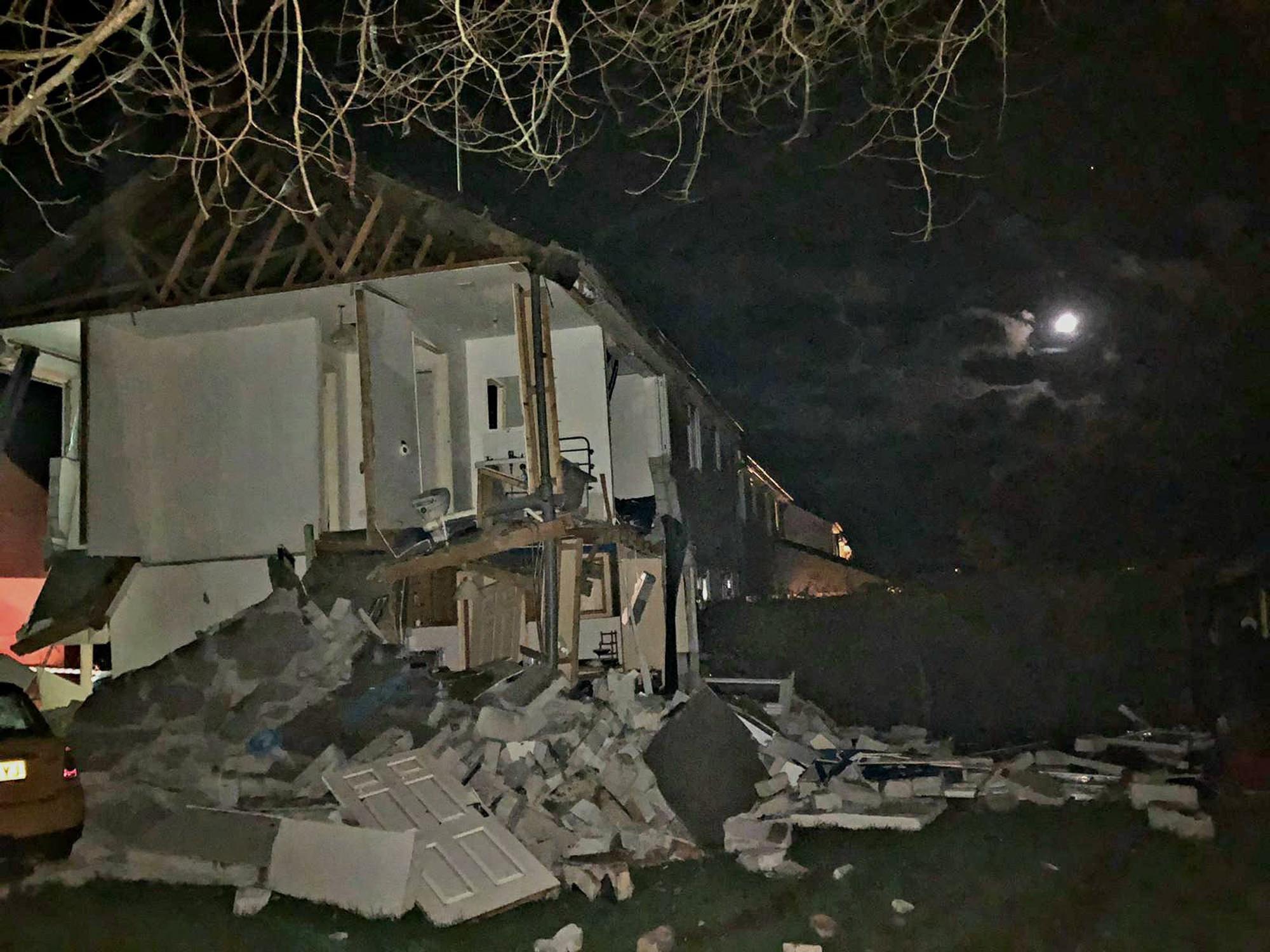 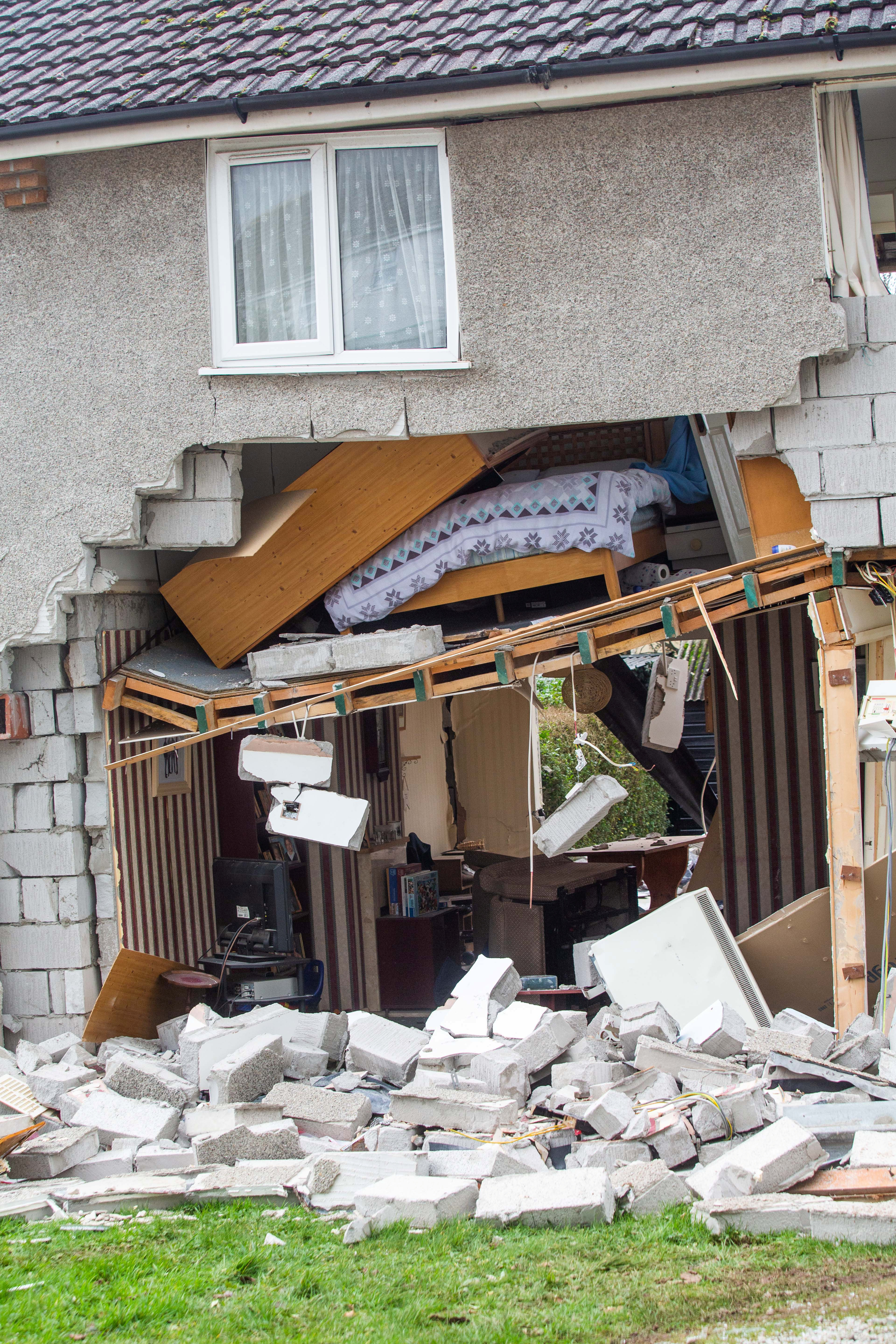 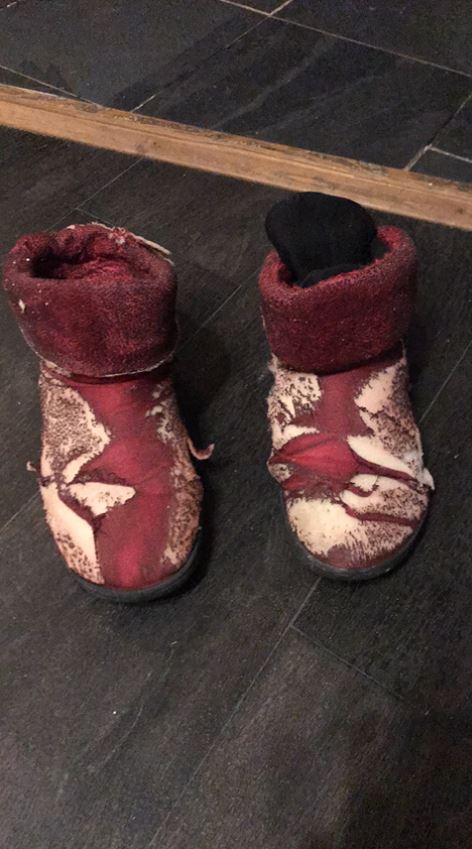 Veterinary assistant Demelza said her parents, who married in 1971, had lived in the house for twenty years and don’t have home insurance – but hope to recover their key possessions in the next month.

Demelza plans to house her parents until they recover, and they will then move into a static caravan on a nearby farm owned by her mother and father-in-law.

I said to mum: ‘I know you didn’t like the house but you didn’t have to blow the bloomin’ thing up!

She added: “Thankfully a lot of their possessions weren’t destroyed and we will be able to get them back.

“The only concern is paying for the house.

“They don’t have any intention of going back there. There’s no love lost with that house, they were looking to move closer to us in Kilkhampton this year anyway.

“My parents don’t have expensive things they need to retrieve from there. They just said: ‘we’re all here and that is all that matters.’”

She continued: “I said to mum: ‘I know you didn’t like the house but you didn’t have to blow the bloomin’ thing up!

“We‘ve had some laughs about it, we’re trying to retain a sense of humour and keep our spirits high.”

Demelza said the family have been overwhelmed by the support they’ve received in recent weeks, with some locals even offering to help build a new house from scratch.

She said: “My parents are legends and people love them, which is why I think we’ve had this response.

“They’re an old school Cornish family and they’ve been here all their lives. But we’re amazed by the support.” 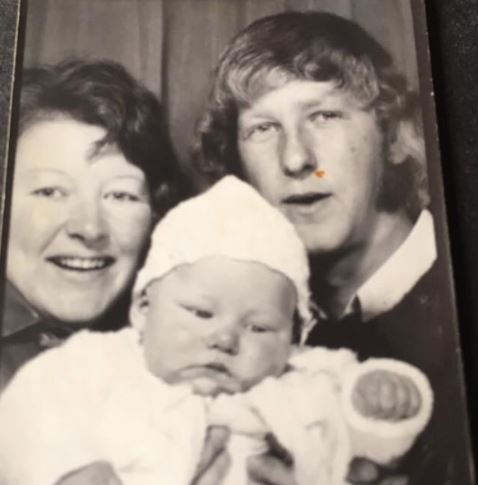 Alan and Josie are pictured alongside Demelza as a babyCredit: Demelza Snell 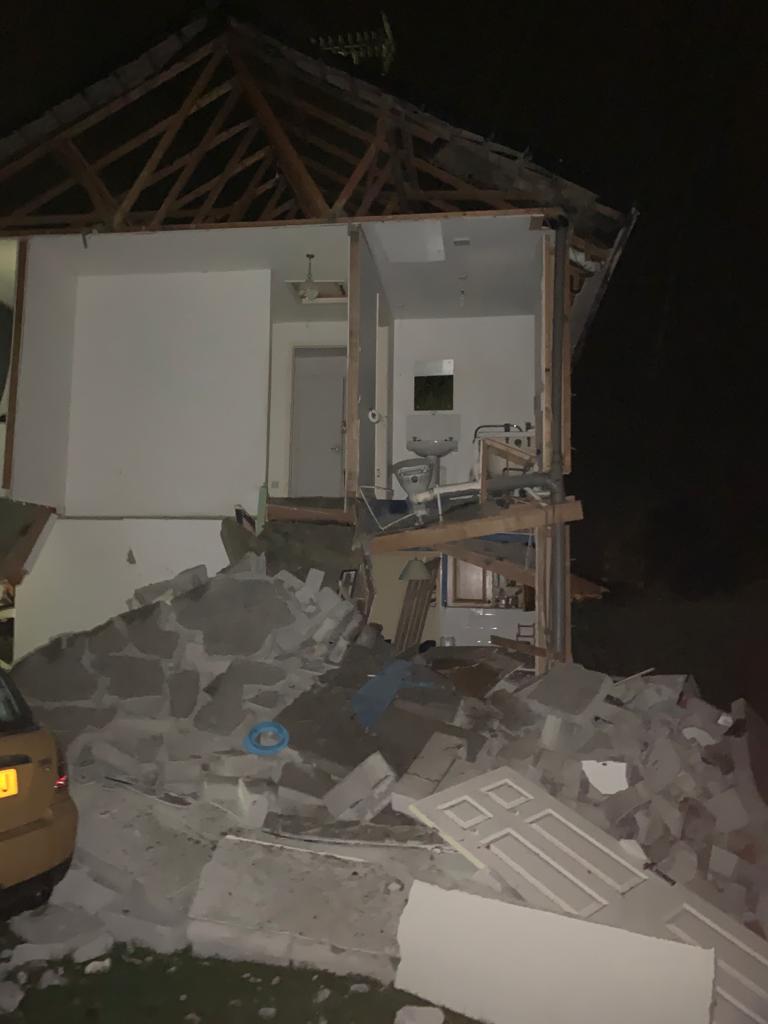 Witnesses described hearing a loud bang and a strong smell of gas in the areaCredit: Demelza Snell

Demelza has since set up a GoFundMe page to replace some of the items lost in the explosion.

A Cornwall Fire and Rescue Service spokesman said: “At 21:04 a 999 call was received reporting an explosion at a domestic property and a strong smell of gas in the area, it was also reported that there were possibly two casualties trapped in the building with three walking wounded.

“Appliances from Bude and Holsworthy were mobilised to the scene along with specialist shoring equipment to help stabilise the two storey semi-detached house.

“On crews arrival they confirmed that there were no casualties trapped within the damaged structure and the incident was sectorised.

“Crews remained on scene until the property had been assessed by a structural surveyor. The incident was left in the hands of police.”

Glenn Thorne, Wales & West Utilities Gas Emergency Service Manager for Bude said: “We were called to reports of an explosion at a property and immediately sent a team of engineers to the scene.

“On arrival we found that the property had been damaged and emergency services were in control of the scene.

“We worked with the emergency services to make the area safe and carried out all necessary gas safety checks.

They added: “We have found no evidence of a mains gas leak in the area and the property itself was not connected to our gas network.” 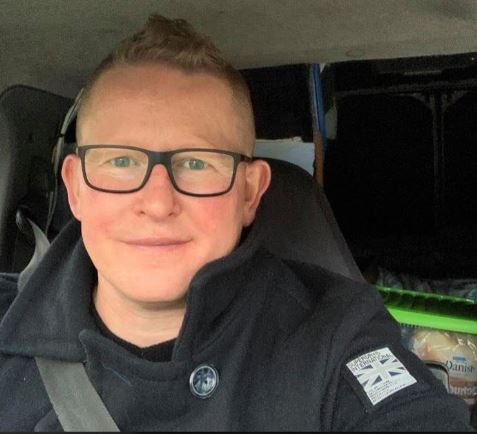 Darren said he was ‘lucky to be alive’ after the blastCredit: Demelza Snell

Boris Johnson has refused to introduce Plan B, insisting it is unnecessary (Picture: Getty/PA)Moving to Plan B to control the...