A woman’s angry ex-partner attacked her in a drunken rage after she ended their relationship, telling her to “lie on the bed and I will cut your head off”.

Lukasz Majtyka, 46, could not accept that his partner of 27 years had left him.

He launched at her with a knife after she told him things were over and began packing her bags on August 7, Worcester Crown Court heard.

Two days later he was caught again with two knives, at her place of work and near her friend’s house.

He has now been sentenced to 11 months in prison.

The court heard how he attacked her at their home in Worcester.

Alison Scott-Jones, prosecuting, said: ‘The defendant tried to lock her in a room to stop her leaving and she then noticed he had a large knife from the kitchen in his right hand. 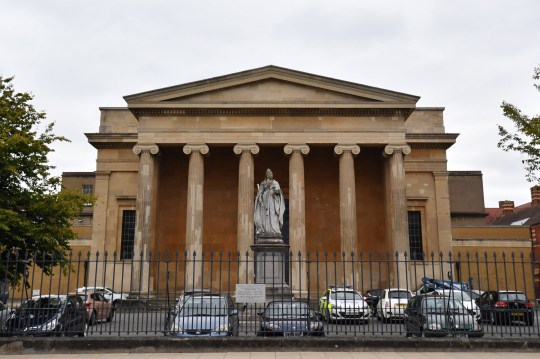 He was sentenced at Worcester Crown Court (Picture: Getty)

‘She was frightened and worried about what was going to happen especially when she was told “you’re supposed to lie on the bed and I will cut your head off”.

‘She described the knife as a straight kitchen knife and the sharpest one in the house.

‘He grabbed her by the shoulders and held the knife to her throat. She managed to get away from his grip and escape and ran to her vehicle outside and go to a friend’s.

‘She had genuine fears that she wasn’t going to be leaving the home on that occasion.’

Two days later he went to her place of work and her friend’s house armed with two knives.

When he was caught by police, he initially claimed the blades were for ‘preparing his lunch’, the court heard.

Miss Scott-Jones said: ‘In interview he described the couple’s relationship as “beautiful but unfortunately we had an argument”.

‘He agreed she wanted to leave him and he hadn’t wanted her to leave. At that stage he denied having any knife and making any threats.’

Majtyka later admitted making threats to kill and possession of two knives in a public place.

He was jailed for a total of 22 months but was told he will be freed after 11 months, with the remainder to be served on licence.

Judge Nicolas Cartwright said: ‘The circumstances must have been utterly terrifying to her.

‘You were angry. You were drunk and you were holding the knife to her throat.

‘Quite unsurprisingly she genuinely believed you were going to kill her there and then.

‘Two days later you were looking to confront her.

‘I reject completely your explanation that you had the knives to prepare food.’

Majtyjka was also slapped with a three-year restraining order, banning him from having contact, directly or indirectly, with the victim.

The court heard Majtyjka had one previous conviction for being drunk and disorderly in 2014.