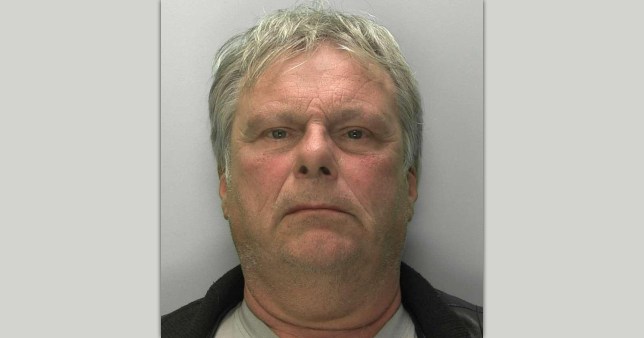 A 63-year-old man who firebombed his neighbour’s caravan after being asked to turn his music down collapsed in court after learning he is going to jail.

He told Gloucester Crown Court: ‘It must have been somebody else who caused the fire, it wasn’t me.’

But yesterday the jury of seven women and five men found him guilty of five charges of arson, assault and making explosive substances and he now faces a lengthy spell in prison.

The court heard how the attack happened during the afternoon of April 4, 2020, shortly after Collins had been asked to turn down his music by other members of the caravan site.

After a heated argument with the other residents, the noisy neighbour agreed to lower the volume.

Shortly after, resident Dan Marcus felt a brandy bottle hit his leg as he stood outside a mobile home, and seconds later his trousers were on fire.

He then saw Collins trying to set something between his legs alight before throwing it towards another caravan, the court heard.

Marius Radu heard the arsonist shout ‘catch’ just before the bottle of Cinzano landed and set his home on fire.

The jury heard how he suffered burns on his legs as he tried to kick out the flames, before another resident used two fire extinguishers to put them out.

Collins said in his evidence that he had been listening to the radio in his caravan and was not aware of the fire until the emergency services arrived.

He stated he did not go out and investigate because he did not want to get involved.

When Collins was arrested he told police he believed the fire was part of a plan to get rid of him and had been concocted by other residents.

He told the court: ‘I didn’t yell out “catch”. I have arthritis which causes me pain. I’m unable to do such things as throwing. I now walk away from confrontation.’

The defendant added: ‘I did not make or throw the petrol bombs. It must have been somebody else who caused the fire, it wasn’t me.’

However the jury were told that both bottles, which were ignited using a wick, had Collins’ DNA on them.

Donald Trump refuses to testify at his impeachment trial


After deliberating for three hours and five minutes, the jury returned a unanimous guilty verdict on all five charges – two counts of making an explosive substance, arson with intent to endanger life – causing actual bodily harm to Mr Radu and assault by beating of Mr Marcus.

Judge Timothy Rose warned him he is facing a ‘very lengthy prison sentence’ and remanded him in custody until his sentencing towards the end of March.

Collins then collapsed in the dock as he was sent down and he had to be aided by a number of custody officers.